Read the Editor's Intro to our latest print issue of the NACLA Report, A Peoples’ Policy for the Americas, focused on imagining what a progressive, democratized U.S. foreign policy toward Latin America could look like. 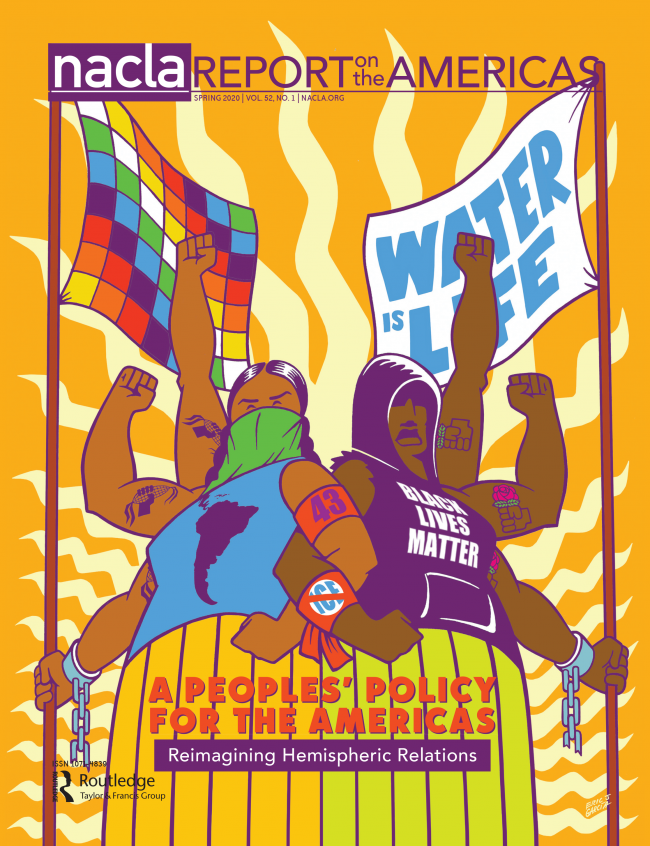 The last two years has witnessed a widespread rethinking of the United States’ role in the world. First, U.S. president Donald Trump has promoted an anti-liberal approach to foreign policy, which argues that endless wars, military assistance, and free trade have wasted taxpayer dollars, mired the United States in unwinnable conflicts, and sent jobs overseas. Second, liberals have worried that Trump’s victory in the 2016 election augured the end of U.S. global leadership and the “rules-based international order” that, they claim, defined geopolitics after World War II. Finally, a coalition of leftists and libertarians have encouraged an anti-imperialism that centers U.S. retrenchment. For the first time since the Cold War’s end, U.S. citizens are debating whether the nation can, or should, retain its undisputed hegemony.

These discussions have focused primarily on the U.S. presence in the Middle East, U.S.-Russian relations, and the so-called “rise of China.” However, arguably no region has been the site of more U.S. influence—whether economic, military, cultural, or political—than Latin America and the Caribbean. Over the course of the 19th and early 20th centuries, the United States intervened regularly in Latin America and the Caribbean, seizing territory, as happened in Mexico; colonizing, as happened in Puerto Rico; and ensuring its economic dominance, as happened in Central America, Haiti, and the Dominican Republic.

As it rose to globalism during and after World War II, the United States continued to assert itself in the region. U.S. agencies from the State Department to the Central Intelligence Agency sponsored coups, initiated psychological warfare campaigns, and collaborated with local dictators to secure the Western Hemisphere from fascism and, later, communism. U.S. officials further saw Latin America and the Caribbean as testing grounds for counterinsurgency techniques and sterilization campaigns, which would later be exported elsewhere. In short, as historian Greg Grandin has argued, Latin America served as “empire’s workshop.”

While these movements demonstrated that Latin American and Caribbean peoples could exert significant agency in the face of the United States’ overwhelming power, the fact remains that exploitation did not—and given current realities, likely will not—end through resistance alone. Rather, empire will only cease when those living in the United States partner with their southern neighbors and enact a new, progressive foreign policy agenda.

For most of modern U.S. history, a belief that the United States should be the guarantor of global peace and prosperity has undergirded the ideology of the bipartisan establishment that crafts U.S. foreign policy. Today, however, things are changing. First, an emergent, transpartisan anti-militarist movement dedicated to U.S. “restraint” has begun to coalesce in organizations like the Quincy Institute for Responsible Statecraft, a think tank partially funded by George Soros’s liberal Open Society Foundations and the libertarian Charles Koch Foundation. Second, Democratic hopeful Bernie Sanders, a leading contender in the presidential primary, has expressed a historically unique commitment to progressive internationalism. Together, the emergence of the Quincy Institute and Sanders’s success suggest that a significant cohort of people in the United States are weary of the global “leadership” that has caused so much death, destruction, and deracination worldwide.

Nevertheless, contemporary debates about the United States’ role in world affairs remain primarily the province of U.S. citizens. In the few cases where foreign perspectives are heard in Washington, D.C., they are usually expressed by groups, like the Saudi royal family, invested in the status quo of U.S. empire. In our opinion, a truly progressive—even democratic—hemispheric policy that abandons imperialistic militarism will only be constructed if U.S. decision-makers start to listen to the voices of those they have long ignored: the people who live under the U.S. imperium.

Daniel Bessner is the Anne H.H. and Kenneth B. Pyle Associate Professor in American Foreign Policy in the Henry M. Jackson School of International Studies at the University of Washington, a non-resident fellow at the Quincy Institute for Responsible Statecraft, and the author of Democracy in Exile: Hans Speier and the Rise of the Defense Intellectual (Cornell, 2018).

Vanessa Freije is an Assistant Professor in the Henry M. Jackson School of International Studies at the University of Washington. Her book, Citizens of Scandal: Journalism, Secrecy, and the Politics of Reckoning in Mexico, is forthcoming with Duke University Press.