YHLQMDLG is a reggaetón album that will only sound groundbreaking outside of the genre's vanguard. 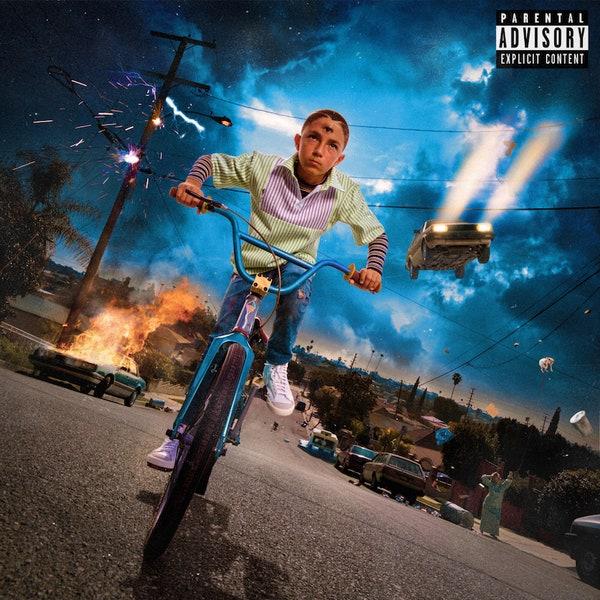 Hours before releasing his much anticipated sophomore album, Bad Bunny performed his latest single, featuring Panamanian urbano singer Sech, on The Tonight Show Starring Jimmy Fallon. Bad Bunny’s attire—pink jacket and long skirt—was an unsurprising choice for an artist who has continuously broken away from the gendered expectations fostered in both urban and pop music genres. What sparked attention was under his jacket: an oversized white t-shirt with a message that read “MATARON A ALEXA NO A UN “HOMBRE CON FALDA” (They killed Alexa, not a “man with a skirt”).

U.S. and non-Puerto Rican viewers were puzzled—after all, international mainstream media had barely reported on the brutal assassination of the 27-year-old Black Trans Puerto Rican woman, Alexa. But for Benito’s home audience the message was clear: He was correcting Puerto Rican media’s misgendering of Alexa, speaking against the rampant transphobia that surrounded and promoted the hate crime, and enacting one of the most explicit pro-trans rights gestures ever seen in the genre.

Heralded by this potent gesture, YHLQMDLG dropped at midnight on February 28. The album’s title, an acronym for Yo Hago Lo Que Me Da La Gana (I Do Whatever I Want), emphasizes what has been evident for seasoned Bad Bunny listeners: He follows his will, he wears a skirt and he paints his nails, he openly criticizes the government, and he has garnered enormous success by doing so. His approach to music is also headstrong. His records rupture with and transform the music genres that cradled him. Ranking at number two in Billboard’s 200 album chart, a historic record for any all-Spanish language album, YHLQMDLG attests to the U.S music industry’s thirst for artistry that provides palatable mixtures of Latin urban authenticity with globalized pop melodies ushered by a provocatively transgressive performer who is socially compromised.

Certainly, Benito Antonio Martínez Ocasio’s gesture on The Late Night Show is the most recent example of the artist's compromise to Puerto Rican political and social causes. He supported and joined the Verano del 19 protests, helping oust the governor, alongside fellow artists. He spoke out  against government bills that would reduce rights for the LGBTQ community, used social media to voice his opinions on the failing public school system, and even made a surprise visit to the former governor alongside rapper buddy Residente to speak about possible measures against the apparent rise in crime in 2018. As a millennial celebrity, his social media presence has been crucial for promoting this socially conscious persona. He sparked debates on gender conformity after denouncing the sexist policies of a nail salon that wouldn’t allow him to get a manicure and paint his nails and by commenting on now-deleted tweets on women’s autonomy over their body hair.

Bad Bunny's self-fashioning attests to his discomfort with the normative gender presentation fostered in pop music and música urbana alike. His latest album’s title highlights this insistence—he will not abide by anyone else’s standards. Thus, Bad Bunny’s image has become the symbol for a young generation wrestling against controlling, stagnant paradigms, echoing women’s liberation struggles as well as queer and trans fights for legal recognition, material resources, and even their humanity. However, the statement seems incongruous with the album’s musical proposal. His debut album, X100pre, had already made evident that Benito quite literally can do whatever he wants: abandon the producer and record company that jump started his career; record a pop-punk tune, a Mexican corrido, and a Father’s Day bolero; release Oasis—a slightly disappointing collab with reggaetón’s blandest blanquito performer J Balvin—and yet excel at every one of them. Benito’s whimsical formula grants him success. But if X100pre conceptually reminisces on an early 2000’s Puerto Rican middle-class sentimentality, distorting classic reggaetón samples into sorrowful muted down dancehall and trap tunes, YHLQMDLG instead attempts at a pure reggaetón comeback. Less rounded and consistent, his sophomore album picks up every old school and classic perreo convention it can, not to sonically re-signify it but to explore its most sensuous, danceable qualities. In this sense, YHLQMDLG doesn’t necessarily stand out from the array of reggaetón albums released in the last year but is successful in conveying a multiplicity of the genre’s styles.

The album opens with “Si Veo a Tu Mamá,” an amusing trap with melodies reminiscent of 60s ye-ye and a provocative synthesized sample rendition of “Girl From Ipanema.” It’s a bold move to introduce the album with such a track, given that the rest of the tunes insist so much on imitating early 2000’s reggaetón. Thus, this song, although certainly refreshing, becomes a promise that is never fulfilled. YHLQMDLG counts with strong collaborators such as reggaetón veterans Daddy Yankee, Jowell y Randy, Ñengo Flow, Kendo Kaponi, and Yaviah, trap superstar Anuel AA, long-time collaborator and genre staple Arcángel, formidable up-and-comers Sech and Myke Towers, new school Mora, South American rappers Duki and Pablo Chill-E, and—largely uncredited reggaetonera—Nesi. But even while being accompanied by such successful música urbana exponents, most of the tracks fall flat. Strikingly, Daddy Yankee’s, Anuel AA’s, and Myke Towers’s contributions sound underwhelming for performers with excellent musical repertoires.

On the other hand, “Safaera,” the most critically acclaimed track of the album—and currently recognized as one of Pitchfork’s best new track for the month of March—samples and recalls a vast range of riddims associated with underground and classic reggaetón. Featuring genre powerhouses Jowell y Randy and Ñengo Flow, the track is raunchy and enticing, masterfully conveying the best of perreo. It almost doesn’t even need Bad Bunny in it. But the song’s constant breaks and clumsily stitched transitions from one beat to the other exemplify the album’s guiding structure: It never fully closes one musical idea before moving to the next. Flowing uneasy and interrupted, with rushed endings and rougher edges, both “Safaera” and the album attempt a pastiche of reggaetón references that hope to entice us by just acknowledging them.

The tracks in this album pulsate, sounding out sample melodies and rhythms that sound like home to Caribbean and Latinx audiences that grew up in the first decade of the millennium. But Bad Bunny and his producers sit too comfortably in the songs, resulting in an album that is almost lackluster. When there's an attempt at innovation, such as the usage of the vocoder in “Soliá,” there’s little exploration of the limits of his performance. The tracks that illuminate Bad Bunny’s skills seem incomplete, like “25/8,” which trails off mid-rapping. The beat in “P FKN R,” bound to be a Puerto Rican anthem, does a disservice to Benito’s vocal strength by keeping the trap beat so tame that the fierceness conveyed in his verses fall short. Instead, his two collaborators shine, with a menacing bass melody that highlights Arcángel’s and Kendo Kaponi’s elucubrations on Puerto Rican’s precarious daily life.

“Yo Perreo Sola,” one of the album’s best songs, stands out as a track that validates women’s agency in perreo dancing, and includes an important feature by a woman reggaetón artist. Unfortunately, Nesi is not properly credited in the album’s back cover nor on Spotify, undermining Bad Bunny’s attempt at feminist lyrics by perpetuating the historical occlusion of women collaborators and contributors in reggaetón.

Certainly, his music and videos, his sociopolitical commentary, and his presence online contribute to a conversation on the problematics of sexism, misogyny, and patriarchy inside and outside the music industry. But even when he gestures against these issues, the actual production process and his own actions take away from the power that such visibility can grant grassroots activists and organizers. For example, his repudiation of gender violence in the video of “Solo de Mi” is subverted in his meeting with the former governor to talk about violence in Puerto Rico, at the same moment when The Colectiva Feminista en Acción, Puerto Rico’s most proactive feminist collective, was protesting in front of his mansion demanding an audience and the declaration of a state of emergency due to the rise in gender violence. Bad Bunny and Resident’s 2 AM visit did little to support the Colectiva. Other problematics, such as Bad Bunny’s contradictory discourses regarding his relationship to the genre, his usage of Puerto Rican and Dominican working-class slang in song titles (Bichiyal, Soliá, Safaera), and lyrics can perpetuate stereotypes about the communities associated with these genres, namely impoverished and racialized Caribbean and Latinx folk.

Coming from a white, cis-het Puerto Rican, “Yo hago lo que me da la gana” comes out less empowering and more arrogant. It begs the question: Who is afforded the privilege to do whatever they want in our society? The wide acceptance of Bad Bunny’s reggaetón, music that has been continuously criminalized, stigmatized, and censored, reaffirms the idea that only certain bodies get to perform whatever and however they like.

There is a beautiful transition from the heavy rock ending of “Hablamos Mañana” into the last track of YHLQMDLG. A song like this resembles the type of innovation that Benito has been lauded for, granting him the accolade of being the only interpreter of música urbana that is pushing out of the conventions of the genre. This compliment overlooks the truly novel work of many other reggaetón musicians that for the last decade have been amplifying the sonic spaces of the genre, namely black, working- class interpreters such as Tego Calderón, Ñengo Flow, and Arcángel, to name a few. YHLQMDLG is certainly a reggaetón album but will only sound groundbreaking outside of the genre’s vanguard.

Verónica Dávila Ellis is a PhD Candidate in the Spanish and Portuguese Dept at Northwestern University. Her dissertation analyzes the sonic and performative work of women and queer Dominican urban music artists. She has published articles about Dominican diaspora musicians, the usage of reggaetón as a political tool, as well as critical commentaries on Puerto Rican popular culture. She’s done ethnographic work on urban and alternative music scenes in the Dominican Republic and New York. She co-hosts a Latinx and Caribbean pop culture podcast, The Plátano Diaries, which analyses contemporary cultural events from an intersectional feminist approach. You can tweet about reggaetón with her at @veroenid.