The Social Cost of Bolsonaro's Denial

As Bolsonaro continues to hollow out the state in response to Covid-19, other sectors of society are stepping up. 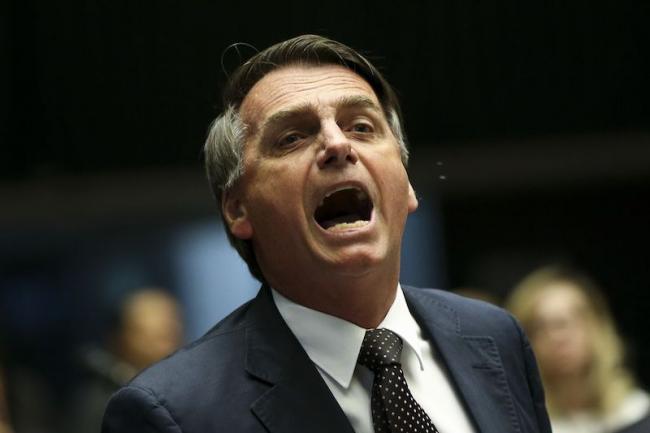 President Jair Bolsonaro of Brazil, in office just over a year, has a well-documented record of rolling back Brazil’s pioneering social welfare measures and permitting vast burning of the Amazon. In the midst of the Covid-19 pandemic, he has stoked further controversy in an already polarized nation by supporting protesters in several Brazilian cities who call for a return to military dictatorship.

It comes as no surprise, then, that Bolsonaro’s response to Covid-19 has been to reject social distancing in the interests of growing Brazil’s economy. On April 16, he fired popular health minister Luiz Mandetta for adopting a strategy that Bolsonaro characterized as geared “almost exclusively towards saving lives.” Despite the characteristic belligerence with which Bolsonaro has opposed social distancing, however, he has a point when he argues that keeping the economy going is essential for survival.

Bolsonaro’s claim speaks directly to the effects of Brazil’s highly unequal distribution of wealth on the precarious economic situation of Brazil’s middle class and poor. Bolsonaro has particular insight into this matter, since his administration and the right-wing administration of President Michel Temer that preceded it have done everything in their power to gut Brazil’s public health system, limit or dismantle income supports to poor families, and end Brazil’s successful affirmative action programs.

Many Brazilian governors and mayors, like their U.S. counterparts, seek to outmaneuver a president intent on prioritizing economic numbers and flouting medical advice. And the political conflict at the top surely impedes an effective government response. But the truth is that the hollowed-out state Bolsonaro leads can’t care for its population. As a result, ordinary Brazilians are responding to the Covid-19 crisis in ways that reflect local community realities of race, religion, immigration, and violence, creating new relations on the ground whose political effects will play out as the pandemic deepens.

According to one survey, 60 percent of favela-dwellers in Brazil will not be able to pay for food for more than two weeks if they have to stay quarantined. A study of black, female small-business owners showed that without income, only 40 percent of them could keep their businesses functioning for a month, and only 5 percent for three months. 35 million Brazilians so far have applied for the federal government’s emergency wage program, which offers significantly less than what’s needed to sustain an individual, much less a family, and many of those who applied were rejected for incomplete documentation.

As help from the state failed to reach the most vulnerable segments of Brazil’s population, activists at the local level jumped into the breach, using social media to respond to pressing issues now facing their communities. In the southern city of Porto Alegre, coalitions of workers, youth, and Black women movement organizations such as Meninas Crespas (Curly Girls), Alicerce (Strengthen Yourself), and Akanni (Fruitful Encounter) distribute “kits” containing basic needs, purchased with donation money and collections of non-perishable food items. Some of the groups took their relief-campaign slogan, “Those who are hungry cannot wait,” from the late Brazilian sociologist Herbert de Souza, who had brought national attention the need for a fight against hunger in the 1990s. The slogan directly recalls as well the heady Lula years of 2002-2010, when the Department of Social Emergency made feeding all Brazilians a national priority.

The Coletivo Quilombelas (Beautiful Maroons Collective), an activist group founded by Black female teachers based in Restinga, one of Porto Alegre’s poorest neighborhoods, voiced similar concerns in their crowdfunding campaign: “They plan to kill us, we plan not to die.” The slogan, coined by Black female novelist Conceição Evaristo, originated in response to Bolsonaro’s racist comments during the 2018 electoral campaign. 150 Black movements across the country signed a letter requesting the government to collect data about the race and gender of the virus’ victims.

Organized religion has been a subject of controversy since the beginning of the pandemic. Several prominent evangelical preachers opposed the closing of churches, including Silas Malafaia, the leader of the Assembly of God Victory Church and President Bolsonaro’s religious advisor. Malafaia downplayed the seriousness of the pandemic and maintained that churches provide “essential services,” a remark that played into the tense politics of social distancing and at the same time publicly recognized the spiritual needs of vast numbers of Brazilians. On March 23, the Justice Department of the city of Rio de Janeiro forced Malafaia to suspend church services. Meanwhile, many small evangelical congregations, which might include fewer people than fill the aisles of grocery stores, remain open.

Whether closed or open for prayer gatherings, Brazilian religious organizations are playing significant roles in feeding vulnerable people, especially the homeless. The latter run the risk of being left out of government aid because they don’t have access to the online forms necessary for securing emergency wages.  In the first two weeks of the quarantine, when the streets of Porto Alegre emptied, church volunteers sought out the homeless people in downtown parks and neighborhoods to provide them with meals.

Help in surviving the pandemic also comes from Brazil’s vulnerable migrant communities. Reports of Syrian refugees distributing free meals to older adults in the city of São Paulo have spread widely on social media. In Toledo, Paraná, a young Senegalese tailor made headlines after he dedicated his time during the quarantine to making masks for Solidarity Embassy, the same non-profit organization that helped him settle when he first arrived in Brazil.

Migrant artists, too, have been active in the fight against the coronavirus, using their social media platforms and skills to spread information about prevention. A small multimedia production company run by Mara Kane, a Senegalese based on São Paulo, collaborated with rappers from Bolivia, Brazil, Ghana, Guinea, and Senegal to produce two video clips, “Restez Chez vous” (Stay Home) and “Vaccin.” Singing in French, the native language of many African migrants, the rappers explain how Covid-19 is spread and debunk the idea that black people are immune to it.

Despite community efforts, economic desperation and social isolation weaken Brazilians’ acceptance of social distancing rules. By late March, food carts and fruit vendors, who had deserted the streets in previous weeks, had resumed their activities in the center of Porto Alegre. Older people take walks in the nearby Faroupilha Park, some of them without masks. In Rio de Janeiro, some criminal gangs enforce social distancing to protect community residents, while others force shopkeepers to do business so they can make their protection money payments. Meanwhile, the number of infections in Brazil continues to rise, with the number of deaths passing the 10,000 mark on May 8.

Were it not for Bolsonaro’s obstructionism, along with powerful private sector pressures for opening the economy, Brazil’s governing institutions might have organized social distancing and delivered resources more quickly, though they would have faced harsh resource limits. Instead, Brazilians see contradictory forces and alliances at play on the ground.

Since the beginning of the pandemic, a right-wing president has rejected science, while governors across the political spectrum support it. When mega-churches seek to defy the law, courts enforce that law, though some local pastors evade it. An out-pouring of neighborhood self-help supplements insufficient government “emergency wages,” deepening grassroots solidarity. Migrants take unprecedented public steps in ministering to the poor.

The interactions of all of the groups responding to the Covid-19 crisis will reshape politics going forward. Almost a hundred years ago, the 1929 world depression transformed Latin American politics and economies for the rest of the century. In the wake of the pandemic, Brazilians may rekindle the democracy of recent decades, return to the military rule of the 1960s and 1970s, or forge new 21st century political alliances and proposals.

For the moment, however, Covid-19 takes off amidst a multi-year right-wing attack on democratic institutions and the poor. The debate pitting social distancing against economic need does not address the long-term socioeconomic processes that have made the situation for many so dire. And the coping mechanisms on the ground are just that: creative, heroic, and inherently limited means to grapple with the choices that the pandemic has brought to light. Millions of Brazilians must shelter in place and go hungry or risk illness and even death trying to earn money for food.

Note: As of May 22, the total number of Covid-related deaths in Brazil has risen to 20,000 since the original publication of the article on May 12, 2020. A total of 97 million Brazilians have applied for the federal government's emergency wage program. 32.8 million of those who applied were rejected outright and 13.7 million were required to submit further documentation.

Originally published in Portuguese in Sul21.

Jeffrey W. Rubin is a professor of Latin American history at Boston University and the author or editor of numerous books and articles on social movements and progressive politics, including Sustaining Activism; Enduring Reform; Lived Religion and Lived Citizenship; and Beyond Civil Society.