Covid-19 and Extraction Pressures in the Peruvian Amazon

As Peru deploys its Covid-19 response, Amazonian territories—and their Indigenous residents—are left behind. 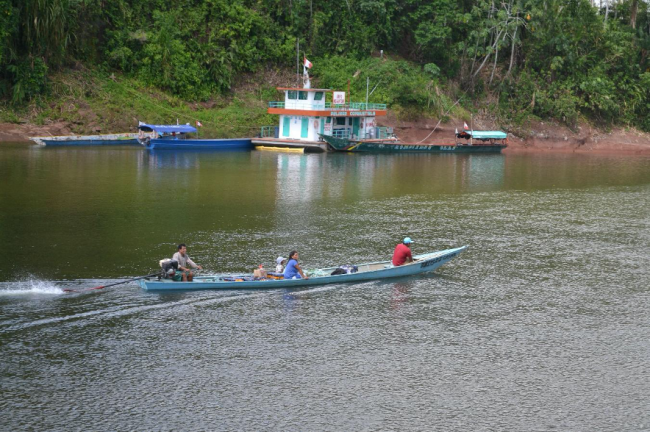 When Peru became a coronavirus hotspot and strict quarantine measures were implemented across the cities starting mid-March 2020, the Peruvian government did not match its action with a pandemic response strategy for the Amazon and has instead been failing the region.

While Covid-19 numbers are still developing, Peru’s Indigenous Amazonians have raised alarm to prevent what they call an ethnocide, understood here as a cultural threat on their populations triggered by Covid-19, but fueled by underlying inequalities, political indifference, and neglect from national authorities that prioritize resource extraction over regional health care.

On March 15, 2020, the Peruvian government announced a strict shutdown of public life and economic activities based on a protective framework for populations, workers, and companies, most of which was designed with urban and Andean contexts in mind. More than a month later, no regional Amazon strategy had followed. The Interethnic Association for the Development of the Peruvian Rainforest was among the leading voices in raising alarm about the lack of Amazonian focus and involvement of Indigenous communities in the Peruvian Covid-19 strategy. An April 20, 2020 letter to the United Nations specifically pleaded to the international system of the protection of human rights, to alert the international community of insufficient health care planning that the Peruvian Amazon was facing.

Shortly after, the Peruvian government did not change course, but instead amplified Covid-19 pressures and inequalities for the Amazon further. On May 3, 2020, it announced its national roadmap planning for post-Covid-19 economic recovery. The first phase swiftly re-activated 27 economic activities, of which eight routinely operate in close proximity to, or even within, Amazon Indigenous territories developed in Indigenous communities. These include oil drilling, natural gas extraction, oil palm, and cacao cultivation, among others. Re-launching these industries meant an influx of resource extraction workers from more densely populated parts of Peru into the Amazon, and even sent them straight into vulnerable Indigenous communities.

By May 1, the Centro Amazónico de Antropología y Aplicación Práctica reported 3,217 confirmed coronavirus cases and 206 deaths, and by May 26 there were 9,412 cases and 462 deaths in the region, with a documented hotspot in the northeastern province of Loreto, in Iquitos. As long as measures and testing remain limited, actual numbers can be suspected to be higher.

Instead of shielding Indigenous Amazonians from Covid-19 exposure from outside sources, Phase 1 prioritized resource extraction as an essential service that could re-launch as early as possible. Two days later later, on May 4, 2020, the Interethnic Association for the Development of the Peruvian Rainforest (AIDESEP) addressed an urgent request to the government to reverse the economic re-opening of the region.

State Gaps and the Catholic Church

In the face of lacking state strategies and support during the crisis, other actors are filling in and gaining visibility. The Catholic Church for example, which has long been a central actor in the Peruvian Amazon with a history and implications far beyond the scope of this article, stepped up, and over the course of 24 hours, funded and built an oxygen plant in Iquitos that was urgently needed to support Covid-19 patients in the overflowing local hospital. Locally active and well supported, their action made them stand out as a positive Amazon actor to rely on, in stark contrast to the slow and disinterested response of the regional and national government.

AIDESEP even specifically pleaded to the Peruvian Episcopal Conference to support the Amazonian vicariates and Indigenous organizations in order to protect Indigenous communities from risk of infection. The Pan - Amazonian Ecclesial Network also provides its own international accounting of Covid-19 cases in their Catholic vicariates across Amazon countries, again presenting the Catholic Church as an immediate practical helper across the larger Amazon region, where regional actions of national governments may fall behind. For local populations, these actions of the church may be remembered as a stark contrast: an impression of humanitarian and compassionate support on one hand, and a state that stood out for its disregard of local health and well-being in defense of economic revenues.

Megantoni is a particularly interesting example in state neglect pandemic action and historical social relationships that constrain Indigenous people to control land planning and benefit from resource extraction in their territories. Megantoni is the Amazon rainforest district that is home to Peru’s biggest gas energy extraction site, Camisea. With tremendous gas royalties and revenues that place it at the top of the list of Peru’s richest districts, as well as 15,000 permanent residents plus a large transient population of gas extraction workers, one might think it would have plenty of reason and opportunity for a solid health care system to support itself. It has been more of a proverbial paradox of plenty, though. After more than 15 years of local high-revenue operations, Indigenous people in Megantoni still face insufficient public sanitation and potable water, a frequently interrupted power grid, and significantly higher health problems related to anemia and malnutrition.

The first case of Covid-19 in Megantoni was confirmed on April 25, 2020, a Camisea worker of the Spanish fossil fuel company REPSOL. They evacuated him by air to Lima, where he tested positive. Local testing and health care are very limited. The only medial emergency services in the Megantoni region are very basic postas médicas (medical stations) in small communities. Megantoni itself has no hospital. Neither the regional government of Cusco, nor the provincial government presiding over the area before, nor the rich district itself have had the necessary threshold combination of political support, revenue, and approvals to build a hospital, and the national authorities in Lima  have shown no interest in developing infrastructure in the region.

In an interview with Peru’s Canal N television network on April 5, the mayor of Megantoni, Daniel Ríos, sent his urgent plea to state leaders. As local health care shortages were becoming increasingly critical in the pandemic, he asked that the government would finally allow Megantoni to use its own funds to build a local hospital. The district has sufficient funding from its gas revenues to do so, but the district mayor's office legally does not have the authority to carry out such a project. The journalist in Lima cut off the topic, “This is not the time to talk about whether a mayor can manage money like that.” But if not amid a pandemic, when would be the appropriate moment to discuss options of local self-governance of basic health care and well-being, and the role of the national government in protecting them?

Meanwhile, Megantoni and other Indigenous communities and residents across the Peruvian Amazon stepped in and took pandemic action into their own hands, closing rivers and roads through local independent action to curb the spread of the virus. But they wonder what will happen when activities and trade resume in their territories. With the hashtags #EmergenciaIndígena (Indigenous Emergency) and #YoMeQuedoEnMiComunidad (I’m staying in my community), the Regional Organization of Indigenous Peoples of the East (ORPIO) reported the Covid-19-related deaths of at least five Indigenous people through social media. ORPIO is also trying to disseminate information about measures to prevent the spread of the disease in the communities.

With local testing remaining limited in the Amazon, infection numbers are developing and uncertain. Reports of the spread of Covid-19 in other parts of the Amazon have led to growing discussion of the lack of regional health care infrastructure, the government’s lack of planning and cultural respect, and, in short, the lack of political support for the Amazon beyond the interests in an extractive frontier.

Over recent decades, Indigenous groups have already led various social protests for the stronger recognition of their rights, especially in the face of rapid expansion of extractive activities in their territories. New environmental land use planning approaches and stronger legal recognition of territorial categories—such as Indigenous territories, for example—has been repeatedly suggested and discussed as a solution, but related policies and interventions remain weak so far.

The pandemic lays bare new levels of crisis layered on top of historical exploitation and marginalization. Perhaps the health crisis and its economic shockwaves can help trigger a critical rethinking of the role of the state and roles of Indigenous communities in Amazonian extraction, conservation, and development.

Ana Watson is a PhD Candidate in the department of geography at the University of Calgary. Her doctoral research is focused on the political ecology of natural gas extraction in the Amazon.

Conny Davidsen is an associate professor in the department of geography at the University of Calgary. Her research centers on the political process behind changing environmental governance related to forests, energy, climate and conservation, with a particular focus on indigenous rights and local livelihoods.