Governmental failures to respond to Covid-19 only reinforce the demands of social movements in Chile. 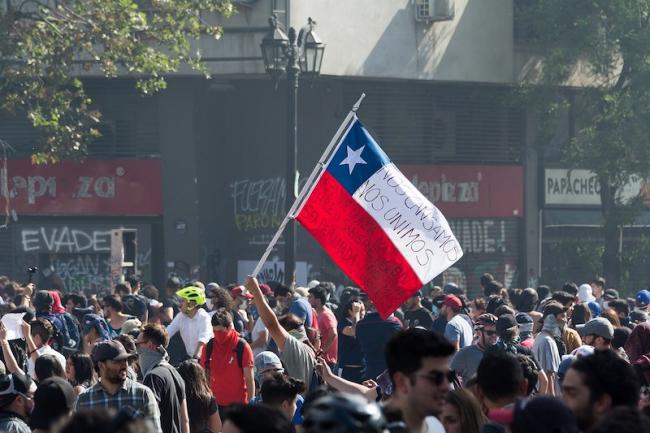 The shopping mall is the icon of neoliberal Chile. Since the last years of the Augusto Pinochet dictatorship (1973-1989), they have mushroomed throughout the country, altering even the most remote landscapes. Their climate-controlled environment, credit card system, parking lots, and food corners are a popular space of consumption and recreation in a hyper-privatized country. But this model has been built on the backs of workers, most of them women and young employees, who labor long hours for meager wages and with little job security.

Both from an epidemiology and labor perspective, the mall embodies the impact of Covid-19 on Chilean workers. When the government ordered the temporary shutdown of malls to slow down contagion, Ripley, one of Chile’s largest department stores, closed its more than 50 stores throughout the country. Although the successful chain reported revenues beyond $1.7 million in 2019, it left more than 3,200 sales employees in complete uncertainty about their future. Other large companies such as CENCOSUD and La Polar have followed suit, quickly passing the pandemic economic costs to their employees. In other words, the retail sector, a local union declared, has “chosen to safeguard the profits…over the possibility of empathizing with its workers.”

The attitude of the large retail companies reflects the sharp inequality that permeates every aspect of Chileans’ everyday life. Seven months after the start of the estallido social (popular uprising) that exposed the fractures of Chile’s neoliberal model built under the Pinochet dictatorship, Covid-19 is a harsh reminder that not all Chileans have the same rights and protections. If working and middle-class families are struggling to isolate themselves in small apartment buildings, members of the elite flew to the beach to avoid the lockdown during the Easter holiday. Emergency laws have benefited the business class. Working families—both wage labor as well as informal and independent workers—are carrying the economic, emotional, and physical tolls of the pandemic.

Chile registered the first Covid-19 cases in early March and traced them back to Chilean tourists traveling to Europe and the stop of cruise ships in the south. As of May 30, the government has confirmed nearly 100 thousand cases and over 1,000 deaths. The numbers keep rising. More than 80 percent of the cases are concentrated in the metropolitan region and Santiago, the capital city of about 5.6 million people. Because of its overcrowded transportation system and high-rise and low-income apartment buildings, the city has been especially vulnerable to the spread of the virus. In reality, only the rich can afford social distancing. Early government responses were disorganized and uncoordinated. They included partial quarantine measures in specific neighborhoods but not entire cities, unclear reporting, public disagreements regarding the exact figures, and disputes between the Ministry of Public Health and the head of the medical community. President Sebastián Piñera’s low approval ratings and the loss of legitimacy of the country’s most important public institutions, including the police force, have worsened the sanitary crisis.

In response to the economic uncertainty caused by lockdowns, employers have reduced wages and working hours and laid-off the workforce. Large retail stores, intercity bus companies, and international chains such as Starbucks Coffee Chile rushed to announce cuts and downsizing.

The devastating impact of Covid-19 on employment and working arrangements in Chile does not come as a surprise. On the eve of the global pandemic, near 20 percent of the workforce was employed in the retail sector. At the same time, self-employment and independent work were the fastest job growing sector, employing 30.4 percent of the workforce. These are the hardest sectors hit by the pandemic, but also include the most vulnerable workers and some of the most anti-union employers. After the government expanded the lockdown to cover most of Santiago and part of the northern region of Tarapacá, the Central Única de Trabajadores (CUT), Chile’s most important labor confederation, urged businesses not to use the sanitary crisis as an excuse to lay off workers and impose “unilateral and authoritarian” agreements.

Neoliberalism has intensified the crisis. One of the legacies of the military dictatorship is an extremely privatized pension system. Based on individual saving accounts, pensions are meager and, in many cases, way below the minimum wage. A large number of people over 60 years old can never afford to retire and continues working, most of them without a contract. This situation is also especially dangerous since they are the population most vulnerable to contract the virus and have little legal protection as informal workers.

Additionally, Chilean labor laws offer few protections. A long work-week, one of the highest among OECD countries, low wages, post-strike retaliation, unfair firing, and job insecurity are the norm, not the exception. As the CUT argued in the weeks following the October national uprising, the social movement stemmed from the “long history of abuses, corruption, and inequality, not only of income but also of privileges and treatment that millions of workers live daily.”

The government responses to the impact of the pandemic on employment have benefited large capital enterprises over workers. In March, the Ministry of Labor announced new regulations for remote work to protect employees’ rights when working from home. While the law guarantees salary and benefits, labor leaders and social organizations are concerned about the re-negotiation of the work-day in extraordinary circumstances and with little input from unions. They have expressed concerns about the difficulties in enforcing the law and denounce that remote work, as it is currently defined, will further flexibilize work and the workweek, increase subcontracting, and erode traditional benefits. Women’s organizations have warned authorities that remote work without a discussion about childcare, unpaid labor, and domestic violence would further exploit female workers.

A more controversial measure is the law of employment protection. The emergency law, enacted in early April, allows businesses to suspend labor contracts temporarily. Employers would be free from the contractual obligation to pay salaries, and, to survive, employees would access unemployment funds. The law benefits the business class and not workers. First, it authorizes workers to cash unemployment funds. These are individual saving accounts built from worker, employer, and state contributions. In other words, the CUT declared on May 1, “The Government chooses to impose a law that transfers the entire cost of the crisis to the workers themselves,” who will subsidize employers with their unemployment savings. Second, although large companies, including RIPLEY, LATAM, and CENCOSUD, claimed to be unable to pay workers’ salaries, they distributed huge benefits among their shareholders.

Covid-19 has become a dramatic display of the country’s economic and social inequality, the disparities in access to health care and social assistance, and the persistence of a neoliberal framework that has systematically undermined labor rights. Since October 2019, protesters across the country have questioned the neoliberal model of economic growth and the political and economic legacies of the period of military dictatorship. The brutal repression unleashed by the police reminded people of the legacy of human rights violations and the persistence of a culture of abuse and corruption within the police force.

One of the movement’s accomplishments was the call for a referendum to decide whether and how to replace the 1980 Constitution, the most important political legacies of the military dictatorship. Because of the sanitary crisis, the National Congress postponed the plebiscite until October 25.

The pandemic may have disrupted social mobilization, but it has not stopped it. Moreover, the unequal impact compounded with the government’s controversial responses have demonstrated the legitimacy of the movement’s core demands, including the right to social security, health care, and work protection.

Ángela Vergara is a professor of History at California State University Los Angeles. She is the author of Copper Workers, International Business, and Domestic Politics in Cold War Chile (2008) and co-editor of Company Towns in the Americas (2011) and the special issue of Radical History Review, The Other 9/11: Chile 1973 – Memory, Resistance and Democratization (2016). In her forthcoming Protecting Jobs, Empowering Workers: The Fight against Unemployment in Twentieth-Century Chile, 1910s-1980s, she tells the story of how workers, welfare professionals, and policymakers defined and battled unemployment and job instability in Chile.

Thanks to Enrique Ochoa for helpful suggestions on this essay.