Two struggles—Black liberation and immigrant rights—are intertwined and must be confronted together, which means acknowledging there is racism in the project of Latinidad. 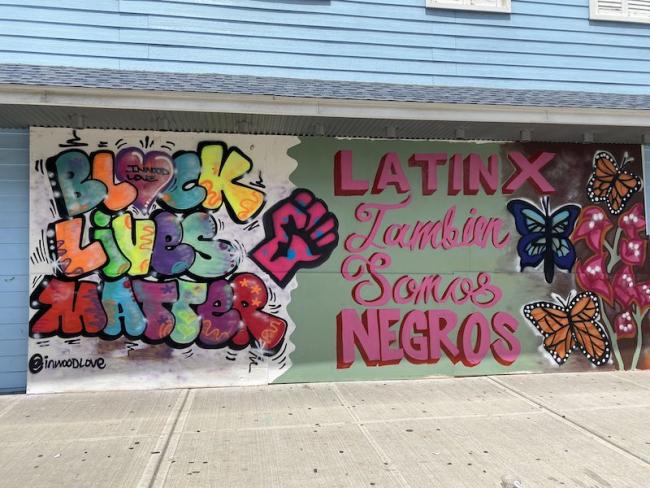 On June 3, a group of protestors, most of them Dominicans, marched on Dyckman Street in New York to demonstrate against looting that destroyed several small immigrant-owned businesses in the Bronx and upper Manhattan. The night before, a group of mostly Dominican men were caught on video chasing away another group of presumed looters from their neighborhood. The footage, which received more than hundreds of thousands of views, underscored racial tensions among Black Americans and Dominicans in this section of Manhattan. The video and the anti-looting protests that followed made #Dominicans a popular hashtag for anti-Blackness on social media. Memes declaring that Dominicans “don’t know they are Black” flooded Twitter, while more serious calls were made to “cancel Dominicans”and to call out Latinx anti-Blackness. Similar scenes like the one on Dyckman have played out across the United States, leading to confrontations between Latinxs and African Americans and exposing Latinx anti-Blackness. Some critics have expressed surprise that there could be anti-Blackness within the Latinx community.

Anti- Blackness is a pandemic. It affects every nation. To be surprised that there is anti- Blackness among Latinx communities—be it Dominican, Puerto Rican, or Mexican—is to misunderstand where racism comes from. It is to believe that individual actions, such as a racist cop killing a Black man, can exist in isolation and can therefore be remedied by a single solution: condemning the racist cop. If that were the case, ending racism would be easier. What sustains racism is precisely that it does not reside on individual choice, but rather in a system that undergirds every single one of our institutions. Racism shapes not only individual actions but, more dangerously, collective, civic, governmental, and official responses to everyday life, from traffic violations to college admission to which mothers are cared for during childbirth and which are left to die, to which children are disproportionately disciplined in schools, to which type of hairdo is considered appropriate, to who is perceived as too loud or too angry, to who can run, nap, read, and watch birds in peace. Racism and its father, white supremacy, are rooted and ingrained in the fabric of every aspect of our everyday world. Eradicating it means we need to confront, directly, the structures that sustain each individual and collective racist act.

The anti-looting actions and protests on Dyckman—from the ousting of the African American presumed looters by a group of Black and Brown Dominicans seen in the video to the protest by mostly Black and Brown Dominicans that followed—were grounded on a generalized misunderstanding of the fact that Blackness is a global category of oppression. That the media identifies Dominicans as “ousting Black people” misrecognizes and erases the fact that the "ousters," in addition to being Dominican, are also Black.

In the Dominican Republic, as in the United States, racism is foundational to the nation. A primarily Black and mulatto country, the Dominican Republic is the birthplace of both slavery and the first enslaved people’s uprising in the Americas. Besieged by Spanish, French, and U.S. colonialism, the Dominican Republic has a complicated history of racial identity formation that was shaped by the fact that it shares the island with Haiti—the first Black republic—as well as its need to negotiate with the U.S. empire.

In the context of 19th century global anti-Blackness, which was often articulated through disdain and fear of Haiti as a symbolic birthplace of Black freedom, the white elite leaders of the young Dominican Republic knew that in order to be admitted as a nation they had to assert a difference from Haiti, which meant portraying themselves as mixed race rather than Black. At the hands of the white elites, this foundational racial myth shaped the nation’s institutions, literature, history, and culture, producing the erasure of Black Dominican lives, of Black Dominican history, and of the long legacy of Dominican anti-colonial Black resistance. This dates all the way back to the 1540s, when the first enslaved people’s rebellion was launched against the Spanish under the leadership of the African-born rebel leader Sebastián Lemba.

Since the emergence of the Dominican nation in 1844, though, the world, and in particular the United States empire, has demanded that the Dominican Republic proves itself to be less Black and more white than Haiti. In 1845, the U.S. government sent a commission lead by John Hogan to the D.R. to assess the country’s ability to self-govern, declaring that unlike Haiti, “it had enough white citizens” to do so. In 1871, shortly after U.S. emancipation and the passing of the 14th Amendment, U.S. president Ulysses Grant launched an expansion campaign that sought to acquire the Dominican Republic in order to ship Black Americans off the mainland, so they could lead a “life of fulfillment” separate from white Americans. The United States perceived the Dominican “mixed race population" as an asset for development and expansion in comparison to Haiti’s Blackness.

Parallel to the project of a separate but (kinda) equal citizenship was the colonial project of territorial expansion to the “lesser republics” of the Caribbean, a project that would take away the sovereignty of Black and Brown people. From that early moment, participating in American citizenship implicitly required complicity with the colonial project of expansion: with agreeing to a form of U.S. superiority and its “Manifest Destiny” to rule and guide over others.

Colonized peoples who suffered the effects of these ideologies in their own land and their own skin often disassociate from U.S. struggles, even as they migrate to the United States. The very concept of a “Latin” America emerged in contradistinction to the U.S. empire. Yet, the most pernicious, vicious, destructive, and lasting effect of U.S. colonialism in Latin American has been the production of the struggles of colonized peoples—Black, Brown, Indigenous, Asian—as separate and, at times, contradictory to Black freedom rather than as the entangled, intrinsically linked struggles for liberation and democracy that they are.

It is precisely that vicious effect of colonialism that led to Dominicans organizing anti-looting protests in New York despite experiencing the violence of anti-Blackness in their own neighborhood and on their own skin.

In the diaspora, the logic of colonial racial capitalism divides Black people based on national and ethnic identities. It erases the fact that Black and Brown Latinx immigrant and U.S. Black struggles are connected; It obliterates the fact that Blackness and anti-Blackness transcend national identity; it hides the legacy of colonialism in upholding white supremacy; and it silences a Black Latinx historical struggle for liberation. It divides and it reproduces oppression.

The results of centuries of colonial and racial capitalist oppression on the island led to a massive migration of working and poor Dominicans—who are, for the most part Black—to the United States. In the diaspora, they experience yet again erasure from both Americanness and Latinidad: Too Black to be Latinxs and too foreign to be admitted to either Black or white Americanness. The double exclusion of Dominicans is common to the experience of Afro-Latinidad in the United States, regardless of one’s ethnicity. The erasure from the more acceptable (light-skin) forms of Latinidad and the inability to be fully included in American Blackness—whether because of language, cultural, social difference or legal status—makes Black Latinxs one of the most vulnerable and underrepresented groups in the United States. The common practice of referring to Latino/a/xs as a race—rather than as an arbitrary conglomerate of ethic and racially diverse peoples who trace their origins to Latin America— further erases Black Latinxs from literally every space, institution, and possibility of representation. We are an invisibilized minority within a minority. But that invisibility does not prevent Black Latinxs from being targeted by both racist police and immigration authorities. Black Latinxs exemplify exactly how anti-immigration and anti-Blackness intersect in our present world.

So where do we go from here? We must recognize that the same colonial logic, which convinced the world that it was somehow acceptable to profit from the capturing and enslaving of Africans and Indigenous peoples, continues to sustain the “immigrant” as a racialized sub-human category of unbelonging, and racialized immigrant subjects as disposable, consumable bodies without history, aliens to the nation-state and at the service of the global capital machinery. Or, as Angela Davis put it, “The discourse of ‘immigrants’ draws from and feeds on the racisms of the past, the racisms that have affected people of African descent, of Native American people.” We must thus appreciate that the two struggles— Black liberation and immigrant rights—are intertwined and must thus be confronted together.

That means acknowledging that there is racism in the project of Latinidad and among Latinx people. That also means recognizing the failure of the label “Latino/a/x” to name our Blackness. That means as Latinx, we must uphold Black lives everyday, in every fight. Our best weapon against inequality and white supremacy is to insist on our intersections: to unite, to engage with each other, and to uplift each struggle as our own because each violence and each exclusion sustains the other. Dismantling one injustice requires that we confront all injustice. The oppression of Black people— Black women, Black LGBTQ, Black migrants—must therefore be confronted together. Black Lives Matter. Black Women Matter. Black LGBTQ Matter. Black Immigrants Matter. Black Refugees Matter. Black Latinxs Matter.

Dr. Lorgia García-Peña is a public scholar and writer. Her work focuses on Black Latinidad, migration and diaspora. She is the co-founder of Freedom University Georgia and of Mind the Gap: Archives of Justice. Currently, she teaches Latinx Studies at Harvard University. Dr. García Peña is the author of multiple award-winning book The Borders of Dominicanidad: Race, Nations and Archives of Contradictions (Duke, Fall 2016) and the forthcoming Translating Blackness: The Vaivén and Detours of Latinx Colonialities in Global Perspective.