Read the editors' introduction to our latest print issue of the NACLA Report, A Green New Deal for the Americas, focused on radical climate action and the prospects of ecosocialism across borders. 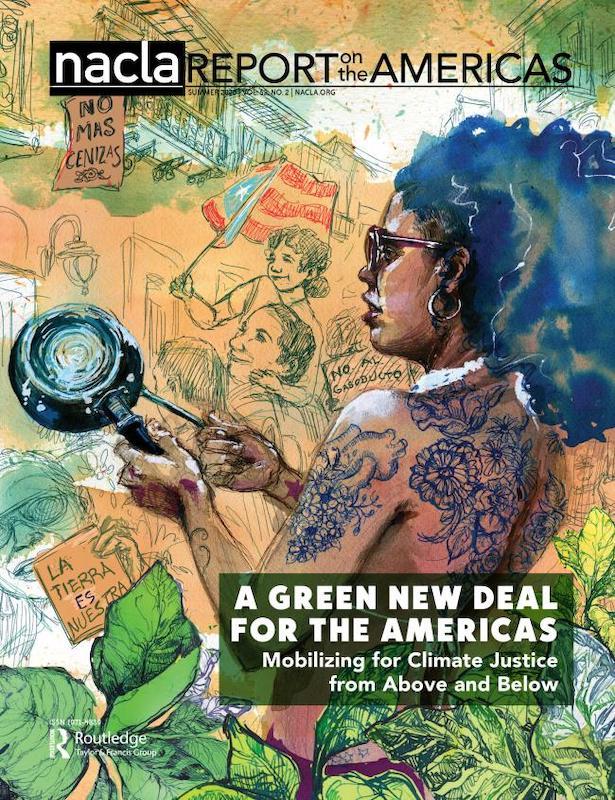 On November 13, 2018, congressperson-elect Alexandria Ocasio-Cortez (AOC) joined dozens of young activists with the Sunrise Movement in occupying the incoming House speaker Nancy Pelosi’s office. “The way things are done has not been getting results,” AOC said. “We have to try new methods.” Two months later, she and Senator Ed Markey introduced a resolution calling for a Green New Deal. For the first time, U.S. climate politics became identified with massive government spending, a “jobs guarantee,” priority investments in communities of color, and a social democratic vision of free public health care (free care services are unprecedented for the U.S., but a longtime fact in much of the world).

While the Green New Deal idea massively expanded the scope of climate action—from carbon pricing to rewriting the United States’ entire social (and ecological) contract—it said little about the rest of the world. Its chief historical referent, the New Deal, invokes U.S. history alone. And yet, the project’s edges have been internationalist. Leave aside the phrasing, and the substance of the project has everything to do with contemporary political economic struggles all over the world, including in Latin America. What role should the state and community play in steering investment? How much investment? How should a no-carbon transition proceed, and who should lead it? Who will benefit first and most? What should happen to the owners, firms, and workers in fossil fuel-rich sectors? How extensively must we reform—or transcend—capitalism? Does the term ecosocialism denote a vague horizon, or a short-term alternative political economy with coherent content? This is no parochial, United States-only discussion. This issue explores these international dimensions, building on NACLA’s Spring 2020 issue, “A Peoples’ Policy for the Americas,” focused on reimagining U.S. foreign policy toward Latin America and the Caribbean.

Indeed, the Green New Deal concept was fleshed out a decade ago by British, not U.S., leftists. It is telling that while AOC herself was radicalized in an environmental protest, it was specifically the anti-colonial, Indigenous-led Standing Rock uprising of 2016. And she frequently calls out U.S. imperialism in Puerto Rico. We have seen “Global Green New Deal” proposals from the UK, Europe, and the United Nations Conference on Trade and Development. Latin American leftists have echoed the Green New Deal’s jobs- and investment-forward approach to climate politics explicitly, as well as indirectly through roughly analogous proposals. These include the regional Nuestra America Verde network and the Economic Commission for Latin America and the Caribbean’s “Big Push” proposal, featured in this issue in English for the first time. We use the phrase “Green New Deal” in this issue’s title as a shorthand for an egalitarian, democratic approach to the climate crisis based on expansive public investments, not green capitalism or green austerity. We don’t see the phrase as an homage to the particulars of 1930s U.S. politics, but if others do and prefer different labels and slogans, we will embrace them.

As we write in April 2020, the COVID-19 pandemic has crashed global markets. Proposals for green stimulus are appearing around the world—in many cases, like in South Korea and Germany, as official government strategies. If in 2018 the Green New Deal idea converged with theoretical calls for bigger, greener, and more egalitarian public investments, today the need for massive public investment is common sense—urgent and practical, not just a debating point.

The Latin American Context for a Global Green New Deal

One of the Green New Deal idea’s chief upshots is finally discarding the notion of a specialized climate arena of action. We are in a climate emergency. In our view, all politics now are climate politics, and all climate politics are political economic struggles. This isn’t because everyone has now agreed to make climate their rhetorical and practical priority, but because no matter what words are used, economies either cause carbon emissions or change in ways that reduce them.

In Latin America, the relevant context for the Green New Deal idea isn’t the official realm of national environment ministries and the green policy elites attached to them. Those have merely tinkered at the economies’ edges. What matters is changing the entire economic system. Fundamentally, what shapes the possibilities for responding to the COVID-19 pandemic and slashing carbon emissions through a massive, accelerated economic transition, is the balance of power between leftist and reactionary forces, between oligarchic capitalists and popular movements, and between the incumbent interests of fossil capital—including public, national oil companies—and a wide array of pro-renewable energy forces. Now, that context is crisis.

Daniel Aldana Cohen is Assistant Professor of Sociology at the University of Pennsylvania, where he directs the Socio-Spatial Climate Collaborative, or (SC)2. He is the co-author of A Planet to Win: Why We Need a Green New Deal. His research and writing on climate politics in Brazil and the United States have appeared in Nature, The International Journal of Urban and Regional Research, Public Culture, The Guardian, The Nation, Jacobin, and Dissent.

Thea Riofrancos is Assistant Professor of Political Science at Providence College. She is the author of Resource Radicals: From Petro-Nationalism to Post-Extractivism in Ecuador, and the co-author of A Planet to Win: Why We Need a Green New Deal. Her work has appeared in World Politics, Perspectives on Politics, Cultural Studies, Boston Review, The Guardian, n+1, Dissent, and Jacobin.