Kristina Lyons' new book documents soil and farming in the Colombian Amazon. It is a powerful critique of capitalist agriculture and a rich account of alternative practices. 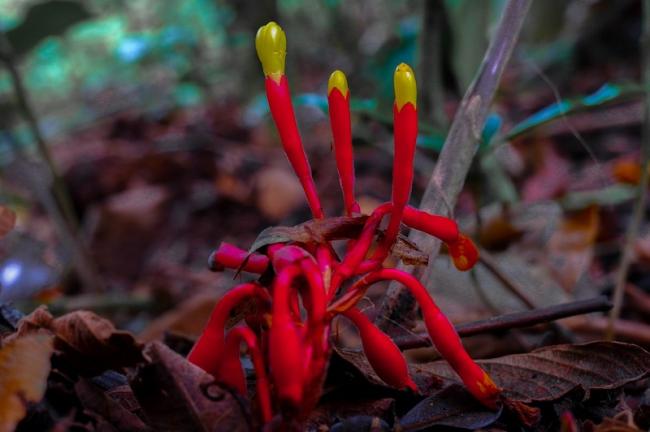 The ongoing peace process in Colombia has motivated a surge in scholarly and popular interest, particularly focused on the rural areas that have long constituted the frontlines of the country’s civil war. Kristina Lyons’ new book, Vital Decomposition (Duke University Press), offers a worthy contribution to this trend, albeit one with an unorthodox protagonist: the soil and different groups of people who intimately work with it in the Amazonian department of Putumayo.

Lyons first arrived in the region in 2007 as part of a Witness for Peace delegation focused on U.S. anti-drug policy and its relationship with the Colombian conflict. But she writes that her relationships with campesino and Indigenous communities pushed her to focus not on violence and death, but on the life-making cultivation processes that begin with the decomposing upper layers of soil. Lyons’ background as activist, community ally, and trained anthropologist shines through in her writing, as she artfully weaves together political arguments, evocative descriptions of her subjects’ daily lives, and social theory. This perspective allows her to draw new insights that pose challenges to dominant understandings of rural Colombian development, conflict, and politics.

Colombia’s armed conflict and the associated challenges of bringing it to an end are most often understood in terms of two related dichotomies: formal state versus armed group control, and legal versus illegal economic activity. In this understanding, Colombia’s problems spring largely from lawless frontier areas where armed groups and illicit economies like illegal mining and drug production and trafficking reign. These paradigms understand the entrance of the state and legal economies as both the solution to conflict and the factors that we should use to evaluate rural Colombia’s post-peace agreement transition, with a particular emphasis on eliminating the illicit coca economy that has long funded armed groups.

Lyons problematizes these dichotomies, however, with a focus on human-soil relations. Instead, she emphasizes a different distinction, based on two conceptions of soil and their related practices. First is that of state soil scientists and capitalist agriculture, which understand soil as a separate scientific object to be harnessed and molded toward human production. Second, she describes the farms and beliefs of alternative soil practitioners. She focuses on a group of activist farmers in Putumayo who engage in what she calls “agro-life processes,” which treat the soil as one part of an “entangled web where every element [including the farmers themselves] is implicated in the existence of the other.” Her analysis aligns unapologetically with these farmers, offering both a powerful critique of capitalist agriculture and a rich account of alternative practices.

A timely example may serve to illustrate the insights that are generated by Lyons’ approach. There is an ongoing and contentious debate between development programs that seek to support farmers with an alternative to coca and coercive approaches like forced manual eradication and aerial fumigation to eliminate Colombia’s coca economy. While the distinctions between these approaches are significant for farmers, from the perspective of the soil, these differences blur. To the soil, it may not matter if it is a coca farmer who applies herbicide, or an ex-coca farmer killing weeds following the mandates of agricultural substitution programs, or U.S.-funded airplanes dumping noxious chemicals on coca and surrounding plants. The point, drawing on Lyons’ analysis, is not to downplay the differences between voluntary coca substitution programs and the violence of forced fumigation or coca cultivation, but rather to suggest alternatives that do not depend on using industrial poison to bend soil to human will.

Lyons describes coca as part “of a protracted series of colonially imposed, extractive-based economic activities that continue to dominate modern territorial relations with the country’s western Amazon” (4). In Putumayo, she warns, this legacy of extractive projects continues with the peace process, which is opening new areas to oil exploration. Even state and USAID-funded development projects to help local farmers follow an extractive model, based on export-oriented monoculture, genetically-modified seeds, and chemical inputs. She argues persuasively that these models are unsustainable. Lyons writes that even traditional campesino Amazonian agricultural practices, based around clearing forest to cultivate, and establish ownership, depend on capitalist logic that damages both farmers and the jungle.

Lyons devotes an entire chapter to soil scientists. She traces the development of soil science in Colombia to show how scientific understandings have been based around soil’s suitability for capitalist production. These soil scientists are privileged as experts compared to Indigenous and campesino practitioners and forms of knowledge. However, with her ethnography of the 2009 “year of soils” campaign, she shows that they are themselves marginalized in comparison to scientists who work on the conservation of air and water. Lyons also describes how Amazonian soils came to be understood as infertile in comparison to the country’s Andean soils, which draw nutrients from mineral-rich parent rock. Lyons argues compellingly that the stigmatization of Amazonian soils fits within an overall criminalization of local peoples and ecosystems that has justified heavy-handed violent state responses like aerial fumigation.

Most of the book, however, focuses on alternative soil practitioners, who criticize the scientists’ (and development programs’) recommendations to address the “deficiency” of Amazonian soils with chemical fertilizers. These farmers instead use practices that draw nutrients from the rich decaying upper layer of organic material provided by the jungle—practices that mean not clearing the jungle to plant.

La Hojarasca, the Spanish word for this upper layer, is also the name of the Amazonian farm school where Lyons meets Heraldo Vallejo, the farmer whose thinking and practices constitute a large share of her analysis. A strength of the book is Lyons’ rejection of the academic conceit of being more knowledgeable than her interlocutors. Instead, she presents many of her central arguments in the voices of these farmers, giving credit for many crucial concepts to Vallejo and two other families whose farms and lives she describes in-depth.

She writes that Vallejo introduces her to the term “agricultura de la muerte” (agriculture of death), which refers to “the extractive-based practices that result when rural families perceive themselves as external to, rather than shaping relations within, the cyclical conditions of existence of la selva.” He also gives her an alternative, which he describes as cultivating ojos para ella (eyes for her)—with her being the jungle—referring to practices of cultivation that are attuned to the myriad relations between plants, animals, insects, micro-organisms, and humans. The differing attitudes behind the two concepts may be observed in a humorous exchange between Heraldo and an agricultural technician that leads off the book’s sixth and final chapter:

“Heraldo: I see the farms as systems that capture energy. Plantas [plants] are the sensors.

Corpoamazonia Technician: Heraldo, how many plantas [generators] do you intend to set up?

Heraldo: No, hombre. I am talking about plantas [plants].

Heraldo: Hombre, I am talking about arbustos [bushes], matas [shrubs], and plantas [plants]!

Heraldo: I am afraid you simply do not understand.”

Lyons should be applauded for her deep engagement with her research subjects. I wondered, however, about alternate voices and experiences that were left out. For example, she tells us that coca cultivation was hugely important in the region at the time of her research but does not turn her ethnographic attention to the illicit crop. Coca farmers don’t appear, in fact, until the final pages of the book, when she evocatively compares Vallejo’s hands—on which various fungi are living in harmony—with those of coca pickers, which end up cut and destroyed from repeatedly stripping the leaves off coca plants. A comparison with other kinds of agricultural practices would have illuminated the practices employed by Vallejo and others in the same way her comparison with soil scientists’ conceptions of soil shed light on Vallejo’s ideas.

This comparison might also have provided some needed perspective on these practices, particularly for people who are invested in an end to Colombia’s conflict and the meaningful transformation of its rural areas. For people engaged in these struggles, the book will likely be inspiring in terms of the alternatives it describes, but also leave lingering doubts. How common is this agricultural model in the region, and how successful have its practitioners been in spreading it? What potential does it have as a broader model for territorial transformation? The reader is left to speculate.

Despite these limitations, Vital Decomposition is a beautifully written book that takes readers deep inside the worlds of Amazonian farmers, soil scientists, and the Amazonian ecosystem itself. During the COVID-19 pandemic, the Duque administration has both pushed for a return to aerial fumigation and ramped up forced manual eradication, violent solutions to the drug problem that stigmatize rural populations. Lyons reminds us that that more just, effective, and environmentally friendly solutions exist within these very communities. Readers interested in rural Colombia, alternative agricultural practices, and the connections between knowledge, practice, power, and resistance, will appreciate her work.

Alex Diamond is a Ph.D. candidate in sociology at the University of Texas at Austin. His research focuses on the local experience of transformation in rural Colombia associated with the peace accords between the FARC and the Colombian government, mining and energy megaprojects, and their interrelations.