In Chile, the Post-Neoliberal Future is Now

In the laboratory of neoliberalism, Chileans are rejecting the commodification of humanity and widening the cracks that will tear the system down. 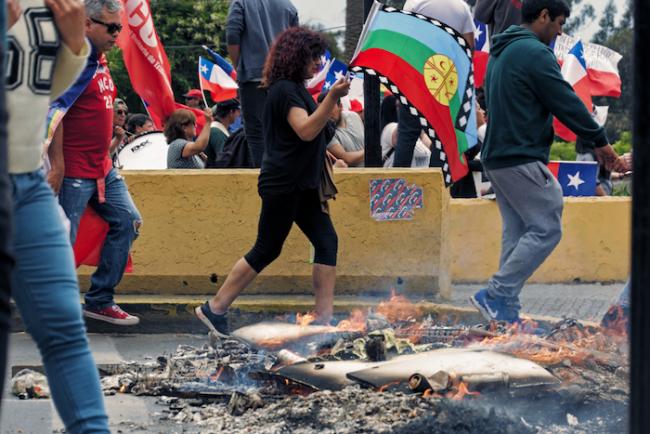 This piece appeared in the Spring 2020 issue of NACLA's quarterly print magazine, the NACLA Report. Subscribe in print today!

The mass revolt of October 2019 destroyed many myths in Chile. It began in Santiago with a protest against the rise in metro fares, but quickly turned into a broader rebuke of rampant inequality, subverting the idea of Chile as a neoliberal miracle and the “oasis” of Latin America, as President Sebastián Piñera had commented days before. The popular movement, ongoing for three months at the time of writing, has captured the world’s attention. Beyond its creative forms of protest and its autonomy from the political regime, the movement also expresses contradictions and forms of social action specific to advanced neoliberalism.

These characteristics put the Chilean movement in the spotlight among the wave of protests refuting neoliberalism today. The fact that such an expression of social discontent took shape in a country that the international community has held up as the clearest model of the benefits of neoliberalism offers a strong indictment of the market model itself. Could the Chilean protest movement embody an alternative to the neoliberal project? Or is it doomed to become a historical footnote?

The Genesis of Neoliberalism

The cultural, political, and economic crises of the 1960s, and the questioning of the limits of the postwar social order that characterized this era, are key to understanding the genesis of Chilean neoliberalism. These were the years of feminism, of civil rights movements, of sexual liberation, and of national liberation struggles throughout the Third World.

In Chile, the development policy of the Economic Commission for Latin America and the Caribbean (ECLAC) represented the United States’ principal effort to recuperate political control in Latin America and to weaken the revolutions underway. Through extensive state intervention, this project attempted to promote industrial and social development in so-called Third World countries. But ECLAC-style development proved incapable of ending backwards structures like the latifundio land estate system, and its industrializing power was limited due to the dependent relationships between the world’s center and periphery. As a result, in the late 1960s and early 1970s, inflation and growing mass movements unraveled the ECLAC model.

During this period, Chilean society exploded. Historically oppressed popular social groups became the protagonists of national life. We saw the cultural rise of the music of Victor Jara and Violeta Parra, and later, in 1970, the Popular Unity alliance of Salvador Allende became the first socialist project to win state power through democratic elections.

The 1973 coup marked the end of this process. But the emergence of neoliberalism that followed the coup was more than a Chilean phenomenon. Around the world, the forces of conservatism managed to lead a new phase of capitalist expansion that revolutionized domestic and international politics. Based on the ideas of Ludwig von Mises, Friedrich Hayek, and other Austrian thinkers, with later contributions from U.S. scholars like Milton Friedman and the Chicago Boys, neoliberalism displaced the Keynesianism that had dominated postwar economies in Latin America, Europe, and the United States. In the neoliberal utopia, the market replaces society and politics by restricting the deliberative public sphere, emphasizing the importance of technocratic governance, and expanding market logics into all areas of life.

The success of neoliberalism, in Chile and around the world, was premised on its ideologues’ ability to provide new economic prescriptions to redirect the criticisms of the 1960s in societies beset by stagflation. By imposing market dominance, neoliberalism’s prophets claimed a new ideal of modernization under the rhetoric of globalization and the meritocratic “knowledge society” that proved enormously powerful.

From Pinochet to the Third Way

In no part of the world did this experiment go as far as it did in Chile. And as the Chicago Boys’ first laboratory, the Andean country was the object of persistent U.S. intervention.

From 1975 onwards, proponents of neoliberalism emphasized the centrality of the market to Chilean modernization. This new development model, neoliberals claimed, would enable Chile to leave behind its latifundio estate system, move toward full, productive employment, reduce poverty, and increase consumption.

This new economy attempted to displace industrializing efforts by exploiting Chile’s so-called “comparative advantages,” a euphemism for returning to the colonial-era practice of exporting raw materials as a means to integrate into the global economy. Tariff reductions and privileged conditions to encourage foreign investment paved the way for the massive entry of foreign capital into a number of primary Chilean industries, including mining and agriculture. Then, the privatization of public companies and social rights—in particular the installation of a social security model of individual capitalization—generated new wealth for local capitalists in a kind of neoliberal primitive accumulation. Through these “innovations,” Chile became the model of neoliberal transformation and the preferred ally of the United States in Latin America.

With the plunder of the riches accumulated over two centuries, Chile experienced a dramatic economic expansion from the late 1980s through the 2000s. Tragically, Chile modernized not through political and economic democratization, but through an extreme commodification that turned people into products.

Neoliberal doctrine usually rejects the state. But in historical fact, Chilean neoliberalism is highly dependent on the state in both a political and economic sense. With the 1980 Constitution, Augusto Pinochet’s dictatorship enshrined the principle of subsidiarity, which handed over personal responsibility to individuals through the market. According to the Constitution, the state cannot create companies nor directly provide social services; it is only able to intervene in the case of market failures by, for instance, supporting low-income sectors with voucher programs, a policy of targeted social spending that displaces the universal provision of rights.

If the Chilean economy was constructed using U.S. tools, so too was the Chilean state, whose builders relied on the U.S. public management model when creating new institutions. For instance, to safeguard the Central Bank’s independence over economic management—a crucial tenet of the neoliberal project—Chilean neoliberals ensured that the bank’s actions were not subject to democratic control. A similar process occurred in the provision of public services, where the state was only allowed to serve as a market regulator and optimizer. As these examples suggest, Chilean neoliberals valued technical efficiency and efficacy above all else.

Víctor Orellana Calderón is a sociologist and the director of Fundación Nodo XXI.

Translated from Spanish by Laura Weiss.