Increasing community control and ownership of crops like cassava can ensure economic and social welfare. 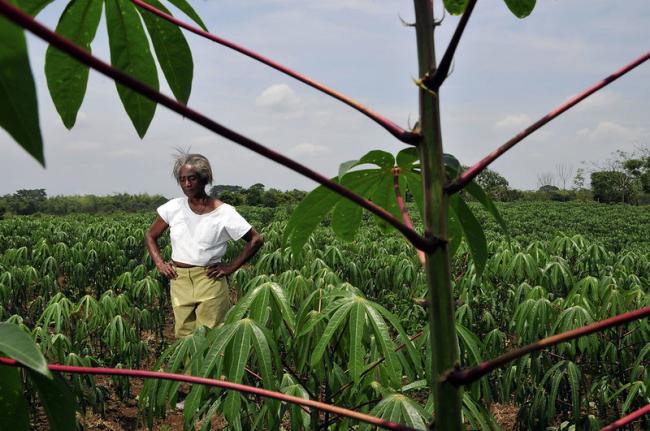 Amid the Covid-19 pandemic, disruptions to global food and agriculture prompted Caribbean nation-states to increase local food production to enhance regional food security. In the wake of such efforts, the Caribbean Agricultural Research Institute (CARDI) unveiled a comprehensive plan to support these small island states in increasing domestic food production.

In this plan, CARDI identified cassava as a critical component in augmenting the scale of food produced in the region. The Institute views cassava as vital because it can be widely grown and locally processed into food items such as flour, starch, and chips. According to Barton Clarke, CARDI’S Executive Director, these domestically produced food items can reduce the region’s extreme dependence on imported foodstuff to ensure food security.

Increasing the scale of domestic cassava production for food security across these sovereign island states, however, involves more than maximizing economic opportunities on local farms. It involves re-orienting social, economic, ecological, and political systems to strengthen local decision-making abilities. Improving opportunities for Caribbean countries to democratically decide on their food and agricultural policies will better enable these island states to command and control food security issues through higher levels of local food production.

Food sovereignty advocates fear that policy responses for food security that prioritize profit over people during Covid-19 will increase food access disruptions in the global economy. Fears over these disruptions prompted food sovereignty advocates to strengthen calls for bold and visionary changes that promote structural transformations in local food and agriculture. These structural transformations involve reallocating trade and investment resources within domestic agriculture sectors to strengthen local decision-making abilities over food and agricultural policies. However since this public declaration, policy responses like CARDI’s plan to increase domestic cassava production for food security in the Caribbean fell short on explicit guidelines for achieving this goal.

The transnational social movement La Via Campesina defines food sovereignty as a process that builds fairer food systems by placing small farmers at the center of food and agricultural policies. Through these structural changes, food sovereignty transcends the myopic vision of profit in local and regional food systems because it adapts to people and places. A food sovereignty approach differs from food security because it focuses on people, not profit. It places the values, relations, and priorities of local populations at the heart of development processes. In placing people over profit, food sovereignty raises social justice questions that strengthen local decision-making abilities over food and agriculture.

Food sovereignty is key to building sustainable food systems in the Caribbean. It will allow people and states to democratically decide how much they want to depend on overseas food suppliers. The main challenge of food sovereignty in the Caribbean are trade and investment policies that over the past 40 years eroded the economic viability of domestic food production.

The decline of food produced in the region is a result of these policies, which did not integrate small farmers' social, environmental, and economic interests. As a result, these farmers could not compete with the influx of foodstuff cheaply produced by overseas food producers. They faced significant challenges in the spheres of food production and distribution. These challenges continue to strain small farmers’ competitiveness in local and regional food systems. Increasing the competitiveness of small-scale producers in the Caribbean will require changes in the trade and investment policies that deepen societal dependence on cheap imported food items.

In 2018, Prime Minister of Barbados and Chairperson of CARICOM, Mia Motley, challenged the region to reduce its dependence on foreign foodstuff by 25 percent over the next five years. The region’s ability to achieve this target will require changing its relationship to food and agriculture. Prime Minister Motley recommends changing the region’s relationship with trade and investment in agriculture to make it easier for land-scarce countries to grow more food. Prime Minister Motley welcomed a renewed emphasis on trade and investment in Caribbean agriculture, in which agricultural expansion strengthens local decision-making abilities and allows for social transformation because it places people at the center of new development processes. By increasing the power and opportunity in people’s everyday lives, approaches that promote the continual transition to more sustainable food systems through food sovereignty can begin to occur.

While pathways are emerging for the transition to sustainable food systems in the Caribbean, they are often through private sector programs that seek to align, not transcend, linkages between people and profit. One program is Red Stripe’s Project Grow, which is a large-scale trade and investment initiative. Red Stripe, a Jamaican beer company, placed 2,256 acres of cassava under production in Jamaica’s farming communities to reduce its dependence on imported maltose syrup by 40 percent. A key challenge to this project’s success is that redirecting funds to finance, educate, and train small farmers as workers in cassava value chains eroded the profitability of beer production. Large-scale programs like Red Stripe’s Project Grow are, therefore, more likely to hamper than help transitions to sustainable food systems because of their inability to prioritize improving the social and economic welfare of people over profit.

If small farmers are only involved as laborers, not owners, in producing large varieties of food crops for large-scale trade and investment programs, these programs bear little meaning to the strengthening of decision-making abilities in Caribbean food systems. Income from cheap agricultural labor does not allow farmers to influence the types of crops that are grown, processed, distributed, and sold domestically. Efforts to strengthen local decision-making abilities over regional food and agriculture should promote initiatives that transform small farmers’ daily lives through ownership. Increased ownership opportunities that provide the best possible lives for small Caribbean farmers exist within the food processing sector.

A cost-benefit analysis conducted by the Food and Agricultural Organization of the United Nations on cassava development indicated a wide range of untapped processing opportunities. The study showed that these opportunities could generate USD $200 million each year to decrease food items imported into the region by at least 5 percent. Across the Caribbean, however, cassava processing often takes place in privately-owned facilities. These facilities generally require small-farmers to make cash payments and in-kind payments with a portion of the processed cassava for their use of technology. In Dominica, for example, where state efforts to develop smallholders’ cassava value chains only came into focus in 2010, cassava processing mainly occurs in privately-owned facilities. Small farmers pay facility owners for their use of electricity, electric peelers, packing machines, mills, and other technologies. The main problem with small farmers paying for their use of privately-owned facilities is that it redistributes decision-making power over domestic food and agricultural resources.

Toward Sustainable Food Systems in the Post COVID-19 Economy

Caribbean governments are currently rolling out CARDI's plan to increase domestic food production by distributing planting material to small-scale farmers. With the Bahamas Ministry of Agriculture and Marine Resource, for instance, CARDI recently distributed hundreds of cassava slips to small farmers across the Bahamian state. According to the Bahamian Agriculture Minister, The Honorable Michael Pintard, these cassava slips represent an opportunity for companies to consistently produce a wide range of food items locally and cheaply. The main challenge to this endeavor, however, is that cheap food production through private sector investment moves money away from people who may prefer to buy their food locally. It, therefore, runs the risk of increasing the challenge of regional food security by eroding people’s capacity to afford locally produced food items.

Mia Motley, Prime Minister of Barbados and Chairperson of CARICOM, called for radical regional integration to build a movement that would allow for all Caribbean people to live the best possible lives. Prime Minister Motley emphasized the importance of regional integration, saying, “The Caribbean has the capacity to be stronger, but it needs to use a united voice, to shape and influence the challenges that confront the global community and its [own] future, by promoting and embracing national and regional symbiotic tripartite relationships, to strategically steer the areas of influence in the Region.”

A food sovereignty approach would help the Caribbean transition to sustainable food systems through regional integration. Should Caribbean governments persist in expanding domestic agriculture through approaches that place profit over people, they risk deepening food security risks in the region.

As La Via Campesina stated against the backdrop of the Covid-19 pandemic, the time to “globally, structurally, and profoundly” reform the agri-food system is now.

Kasmine Forbes is a Ph.D. Candidate at Queen’s University, Canada.