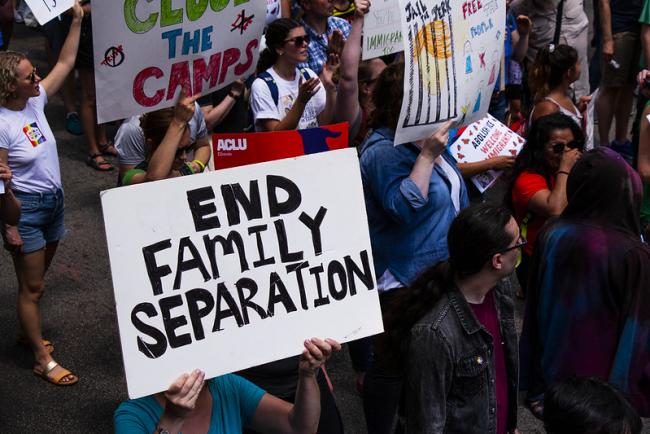 Immigration Nation, which premiered on Netflix on August 3, compels the viewer to empathize with those caught up in the immigration system—not the people terrorized by raids and deportations, but rather the agents charged with carrying out immigration law.

This documentary series tells a story in six one-hour episodes. The communities impacted by Immigrations and Customs Enforcement (ICE) are not afforded the same close portrayal as the agents, and are depicted in flat, stereotypical narratives of the “hard-working immigrant.” This portrayal obscures another powerful narrative, one that might be too threatening to even recognize: that of immigrants as political subjects.

I teach about images and am concerned with the documentary mode. I also am an immigrant and have spent countless hours accompanying neighbors to immigration court hearings, ICE “check-ins,” and asylum interviews both in New York and in New Jersey. I have witnessed how ICE agents interact with my neighbors, but also, and perhaps more revealing, I have seen how the very architecture and language used in the spaces in which these interactions occur are designed to terrorize and dehumanize those who are forced to transit through them.

The New York Times praised the series, saying it will, “most certainly leave you better informed than you were before.” If by informing we mean, telling, explaining, and contextualizing the history, causes, and structural effects of the current mass incarceration and deportation machine, the documentary informs very little. We learn nothing of the legal framework at the root of the current terror that the Department of Homeland Security implements through its various agencies and apparatuses, ICE and Customs and Border Protection being the two most prominent.

At the beginning of the first episode, “Installing Fear,” we learn that Trump set out to expand certain immigration laws. However, there is no mention of the Illegal Immigration Reform and Immigrant Responsibility Act (IIRIRA), the law signed by Bill Clinton in 1996, laying the cornerstone of the current mass incarceration and deportation machine. The law is mentioned in a later episode, but one single mention is not enough. This racist law is what enables the practices that the Trump administration has implemented, systematized, and naturalized.

The documentary asks us to identify with ICE agents, the perpetrators. This identification starts with an acceptance of the language and practices of the perpetrators, presented in their own terms. We hear ICE agents tell us that they are charged with “executing” orders, of “removing aliens.” The verb “to remove” is of course a euphemism. The episode repeats the verb “to remove” in the brief captions that punctuate the narrative without qualifying it. The assimilation of these euphemisms is dangerous: it naturalizes certain operations through language—an old fascist strategy.

Something similar happens with the term “alien.” The film only indicates, through brief and hard to read captions, that the agents working for “ICE Fugitive Operations,” “are deportation officers tasked with locating, arresting, and removing ‘fugitive aliens.’” These explanations are so marginal that they become irrelevant; they pass so fast that it is hard to notice the inverted commas that frame the concept of “fugitive alien.” Nevertheless, the filmmakers simply reproduce the same definitions that have been created by racist laws to justify and finance these operations.

If we were to believe uncritically what the documentary presents, ICE arrests are never violent but precise and flawless operations. ICE agents enter only when they are “invited” inside, and people who hear the agents at their door are unafraid and quick to open. However, we know about the framings of war and the limitations of embedded journalism. The captions do nothing to counter the images. We are told, “ICE officers are trained to identify themselves as ‘police’ unless specifically asked by the individual with whom they are engaging.” The words “lie,” “intimidate,” “force,” “strike,” are never mentioned, yet these actions occur every time an ICE agent carries out raids like the ones we see on screen.

ICE terrorizes our neighbors every time they bang at their doors. ICE separates children from their mothers and fathers every time they detain someone in a raid. I know this because of many conversations, and because I have seen videos filmed by families, terrified as ICE agents bang at theirs doors demanding, violently, without any judicial warrant, that they let them inside. These videos serve as the absent reverse-shot of the many calm takes that appear in the episode.

Scott Mechkowski, ICE Deputy Field Office Director of New York, is interviewed on various occasions. He says, “To be called a Nazi, a racist, it’s ignorant, we don’t pick and choose groups of people based on race, color, religion. We just look for people who are removable.” But, again, who is “removable”? “Immigration Nation” does not interrogate, least of all condemn, this imperial condition of “removability,” which is based on differential rule that discriminates on the basis of race, country of origin, and even religious beliefs.

Mechkowski is represented as the one “bad apple” among the rest. He is the most perverse of the ICE agents interviewed: he jokes at the expense of the people detained; he calls the family members he orders detained “collaterals.” His exceptional cruelty separates him from his colleagues, from the “human,” empathetic agents who are affected by what they see, by what they hear.

The documentary shows us time and again the opinions and views of ICE officers. But this close view is not offered of the communities and activists resisting the racist practices of the state. The Sanctuary movement that has expanded and consolidated in the past few years across the U.S. has an almost decorative presence. Opposing voices are reduced to brief marches and actions around Federal Plaza in New York City. From the point of view of the perpetrator, resistance to the deportation machine is reduced to masses of people that, from time to time, take to the streets and participate in rallies. We do see one such protest on the cellphone screen of one of the ICE officers as he watches on. We hear laughs and jokes about the protesters outside.

Meanwhile, the interviews with the migrants caught up in the deportation machine seemed to me almost pornographic, unbearable to watch. For instance, the camera takes us to the moment of the reunification of a father with his daughter. The girl had witnessed the murder of her mother, causing them to flee their home country. She was then separated from her father by the United States, without any explanation. The camera fixates on the girl, not affording her the privacy she needs at this moment with her father. From the moment that migrants cross the border, they are stripped of their right to privacy, which this documentary only reinforces.

Not only are migrants caught in the deportation machine, they are also caught in the cinematic frame. According the point of view that the series reproduces, migrants are never the agents of their own destiny. Regardless of their pasts, of their stories, here they are defenseless. They occupy the impossible position of the culprit of an alleged crime and of the victim of the system that convicts them. The camera strives to show us that the migrants interviewed do not understand what is happening to them. This is with good reason: the laws are arbitrary, absurd, senseless, and the interviewees express variations of these ideas. Thus, they cry on camera, they grieve. The spectator is called to feel, and to feel bad, for them, and she does.

The reproduction of this static narrative of the hard-working, good, defenseless migrant, obscures the potential alternative narrative, that of immigrants as political subjects, with their own agency. In one of the “peaceful raids” captured on camera, we see agents banging on different doors, yet nobody opens. The building seems to be empty. We hear one of the agents saying, “This is the building where nobody is opening their doors.” This was surely a communal effort, and the result of popular education. Across boroughs, neighbors have been teaching themselves that they have the right to not open the door to ICE agents if these agents do not present an arrest warrant signed by a judge.

“Immigration Nation” presents the idea that ICE officers carry out their jobs entirely disconnected from the intrinsic violence that they set in motion. The interviews with ICE officers, the raids we see on screen, and the countless close-ups of documents, folders, and office paraphernalia (family portraits, coffee mugs, cards, etc.) bolster this view. In interview after interview, agents say that they are just doing their job. By giving them the space to separate themselves from the violence of the system, “Immigration Nation” exonerates them.

Rebecca Heller, Human Rights Lawyer of the International Refugee Assistance Project, is one of the few interviewees who is critical of the agency. She says, “I think the brilliance of any bureaucratic system whose net result is fear and trauma is that it’s big enough to break it down such that everyone just thinks they are only moving papers or only doing a little piece and a very small number of people at the top have designed the system such that like an incredible amount of trauma and terror results, but most people are completely divorced from that.”

The “conveyed message” of bureaucratic disavowal successfully reaches the audience. The New York Times reviewer wrote: “But what sticks with you from ‘Immigration Nation’ is its up-close depiction of the banality of deportation, of the huge disconnect between the everyday people employed at ICE and the Border Patrol and the everyday people they detain, arrest and ‘process.’”

This banality of deportation is a construction. The documentary does represent the tasks completed by agents as if they were devoid of violence, as if it did not generate terror, fear, and anxiety among the affected communities. But this is the work of the camera, of the editing. The tasks ICE agents must complete daily are not banal: they go to people's homes at 5 AM or 6 AM to make violent arrests, which instill fear and trauma in children.

In an LA Times interview with the directors of “Immigration Nation,” filmmaker Shaul Schwarz describes serving in the Israeli Defense Forces. He says, “as somebody who takes orders, you’re caught in a hard position. You’re just a soldier. And I think that is something that interested us, that we hope actually comes across in the show that is not throwing any side under the bus…”

In the interview, Schwarz calls for the audience to “look at the bigger systematic problem.” But “Immigration Nation” does not show us that “bigger systemic problem.” It stays at the level of the “soldier,” the ICE agents, adopting the point of view of the perpetrator. For the filmmakers to have so much access yet put the focus on what these perpetrators might feel, think or fear, is demobilizing, immoral, and dangerous.

Thanks, gracias, to Amanda Sommer and César Barros A. for helping with the translation and the editing of this piece.

Ángeles Donoso Macaya, associate professor of Spanish at the Borough of Manhattan Community College/CUNY, is author of The Insubordination of Photography: Documentary Practices under Chile’s Dictatorship (2020) and co-editor of Latinos/as on the East Coast: A Critical Reader (2015).