Anger over police abuses boiled over after officers killed Javier Ordóñez in Bogotá on September 9. 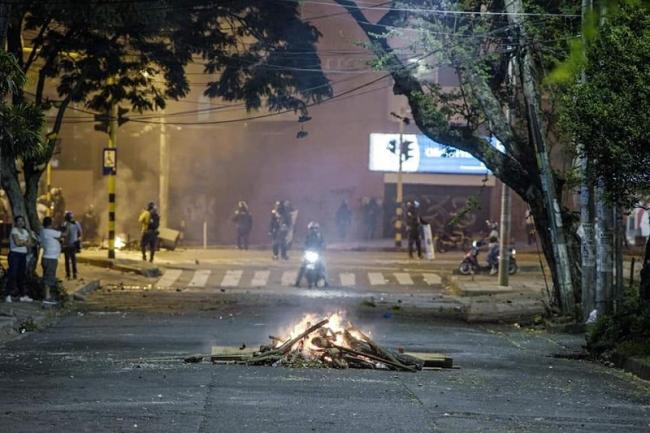 As a small nonprofit media organization, we rely on institutional support and the generous support of our readers to keep NACLA's extensive web coverage available free of charge. A donation in any amount helps to ensure we can continue providing the highest-quality coverage of the region, as we have done for over 50 years, throughout the Covid-19 pandemic, and in solidarity with the global Black Lives Matter movement. With summer drawing to a close, we humbly ask for your support. nacla.org/donate

It was a night out just like any other. It was around midnight on September 9 in Bogotá when Javier Ordóñez and two friends decided to go out to buy the last beers of the night. It would be the last beer of his life. They were walking down Avenida 77 in the Villa Luz neighborhood in the northwestern part of the city when two police officers appeared. One of them said to Ordóñez, "You again? You're not getting out of this one." Then they knocked him down and tased him at least 11 times.

“We went out to buy more liquor and they passed by and asked us for documents. We gave these to them. One of them told my friend [Ordóñez], you won’t be spared from this one,” said Juan David Uribe, who filmed the moment when the police used brutal violence against his friend and later shared the video as widely as possible to spread word of the situation.

Ordóñez was an aeronautical engineer, he was studying law, at 46 years of age he was the father of two children. Before the police knocked him to the ground, he appealed to his right to appear before the appropriate authorities if he had committed any illegal act. But the police simply held him down and began to shock him. “Please, please, they’re filming you,” Ordóñez shouted. But the two policemen continued.

When he was nearly unconscious Ordóñez was transferred to the Immediate Action Command (CAI) of Villa Luz, to which the police belonged. According to an individual who was detained along with Ordóñez, the police proceeded to brutally beat Ordóñez until he was unconscious. Uribe, the friend who filmed the incident with the Taser, says he asked the police to transport the engineer to a hospital. When he entered the hospital with his friend, says Uribe, the attending doctor confirmed that he had arrived practically dead.

In the wake of this police crime, hundreds of young people took to the streets to express their discontent, mainly in the working class neighborhoods of Colombia’s cities. “There is a lot of anger,” said one of the protesters, who for security reasons presented himself using the initials CPR. “This Friday [September 11] there were renewed calls to continue actions in downtown Bogotá.”

Across the country, youth set fire to at least 60 police facilities, vehicles, and motorcycles belonging to the National Police. They also sabotaged banks, chain stores belonging to transnational corporations, and buses from the TransMilenio line.

The police responded with firearms and extreme violence. Ten civilians have died—7 in Bogotá and 3 more in Soacha—according to reports by Defense Minister Carlos Holmes Trujillo.

Protests and acts of sabotage have spread to the main cities of Colombia, including Medellín, Cali, Barranquilla, Bucaramanga, Popayán, and Ibague.

Activists in the city of Cali, who have withheld their names security reasons, say that arrests along with the use of firearms by security agents have been a common feature of this week’s protests against police brutality. But they are determined to continue with their actions. “This is the discontent that people were expressing since before the pandemic. An expression of social discontent that had its maximum peak on November 21, 2019, when many people took to the streets as a sign of not putting up with it any longer," the activists reported in the midst of the brutal repression they suffered in Cali at midnight on September 10.

In addition to the murder of Ordóñez, at least 45 people have been killed by police, paramilitary forces, and organized criminal groups in massacres during the Covid-19 pandemic. The murders occurred in seven separate incidents in the departments of Nariño, Cauca, Arauca, Valle del Cauca, and Antioquia. The majority of victims were Indigenous, Afro-descendant or peasants. 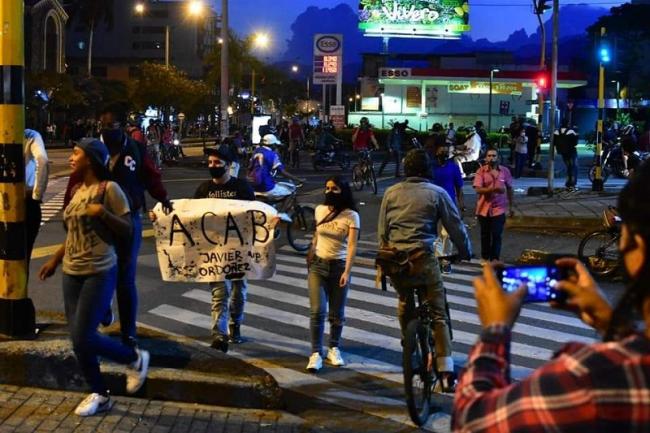 In response, the Cali Free Media Network, which joined protests on September 10 in the city of Cali, called on the Colombian State to “stop the genocide in Colombia and respect the right to protest.”

CPR, the Bogotá activist, indicated that Colombians have taken to the streets in various cities because “along with the murder of Ordóñez there are many more injustices, such as the Paramos massacre and the other massacres that have occurred over the course of the year. It’s absurd.”

It remains to be seen whether the current protests will be limited to this weekend, or whether they will serve as a prelude to a new strike that had already been scheduled for September 21. “We’re seeing an incredible uprising of people in different parts of the city, by very large groups that are blocking many streets that have never been blocked before,” said CPR. “It’s been many years since something so forceful was done. Many people are demonstrating everywhere, but we’re waiting to see what happens on September 21.”

In response to protests, on Friday former president Álvaro Uribe tweeted his support for a “national government curfew, Armed Forces in the streets with their vehicles and tanks, deportation of foreign vandals, and capture of intellectual authors.” Such a crackdown, he insisted, would be “better than deaths, wounded police, the destruction of CAIs, and risks to the Transmilenio and the Medellin Tramway.”

Military in the Streets

According to the latest reports received, at midnight on September 10 police continued to shoot live rounds at protesters in several cities. “Police from various corporations have been deployed, such as the military police, the SMAD (Mobile Anti-Riot Squad) and carabineros,” according to the Cali Free Media Network.

Meanwhile, in Bogotá the Defense Ministry sent an additional 850 police from other regions, along with 300 soldiers from the 13th Brigade of the National Army, to bolster the efforts of 1,000 police that were already on the streets trying to break up protests. Since the beginning of 2020, the 13th Brigade has been commanded by Brigadier General Óscar Reinaldo Rey Linares, who was a military attaché in the U.S. Southern Command. He has also served as commander of the ‘Fifth Brigade’ of the Second Division, Popa Battalion, and the 12th Brigade in the department of Caquetá, among other positions.

“The portals that guard the vehicles of Transmilenio, a private company where the state only receives 1% of profits, are guarded by the military. There are police everywhere, the helicopter is still making rounds. The shootings continue, but in certain places there are people who are starting to shoot at the police as well, mainly in the rough neighborhoods,” adds CPR.

The Comando de Acción Inmediata (the Immediate Action Command, CAI) is a police unit with a small, local jurisdiction in an urban area. For the civilians in these areas, however, the CAIs are known as systematic centers of torture, rape, mistreatment, and abuse of various kinds. “When you’re arrested you can be taken to a CAI, or a URI [Immediate Reaction Unit], among other places. But they’re all absurd places of detention where they beat or torture you,” denounces CPR, the activist.

In the videos recorded by Uribe, CAI police can be seen using a 4200 Taser Model X2, with which police in Colombia have been equipped since 2012. The SMAD (Mobile Anti-Riot Squad) and patrol cars are also equipped with this type of weapon. Between 2018 and 2019 alone, the Colombian Security Secretariat bought at least 1,000 such Tasers, which many countries consider to be highly lethal. The weapons are manufactured in the United States, mainly by the company TASER International, Inc. (Axon Enterprise), a company based in Scottsdale, Arizona that develops weapons technology and products for police and civilians. 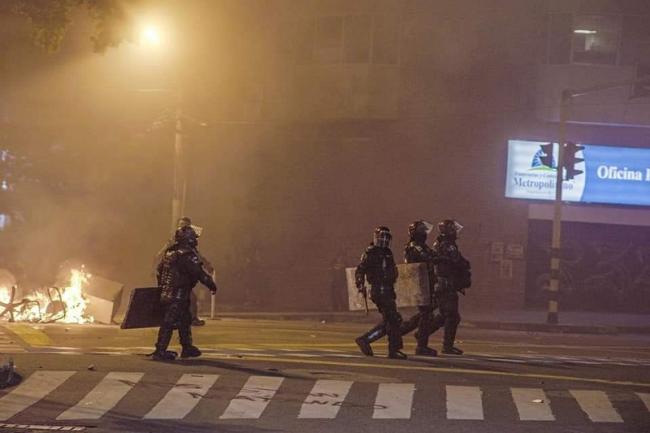 In Colombia, the electroshock weapons have been distributed mainly in Bogotá, Medellín, and Cali. According to contract number 253-1-2019, Eagle Commercial S.A. is one of the companies that has served as an intermediary for the import of Tasers.

TASER International says the device detects, imitates, and interferes with the nervous signal or brain waves between an individual’s brain and muscles. When the interference ends the communication between the brain and the body is resumed without damage.

The preliminary report from the National Institute of Legal Medicine revealed that Ordóñez had nine fractures to his skull and face, as well as several injuries to his ribs, a ruptured liver, and burns from the shocks with the Taser.

For all that the CAI torture centers and the police that work there represent, the youth who took to the streets took out their anger by setting them on fire. “Most of the CAIs in the neighborhoods were attacked nearly simultaneous and massively. The authority figure is being attacked. We’re fed up with the police, with the abuses. All of the people are fed up," concludes CPR.

Meanwhile, the police continue to shoot at protesters, hiding behind a police code that permits such force in defense of police members, institutions, and buildings. And the protesters continue to hope that their demonstrations keep gaining strength ahead of the strike scheduled for September 21—a week away.

Santiago Navarro F is an economist, journalist, photographer, and documentary filmmaker. He is co-founder of the investigative journalism portal Avispa Mídia, a contributor to the Truthout, and a prominent member of the Connectas Journalistic Community.