Bolívar’s Afterlife in the Americas (Review)

A new history of Bolívar by Robert T. Conn explores his contested legacy in Latin America. 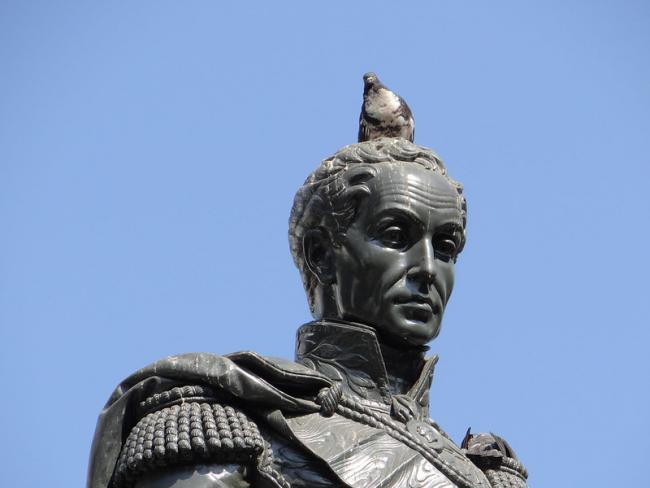 The preeminent figure in Latin American history, Simón Bolívar (1783-1830) is a wellspring of ideologies, political movements, and creative arts.

In Bolívar’s Afterlife in the Americas: Biography, Ideology, and the Public Sphere, historian Robert T. Conn of Wesleyan University analyzes the ways politicians and intellectuals in Venezuela and across the Americas have represented his life and debated his thought.

As Conn demonstrates, Bolívar’s life was complex and paradoxical. For example, during his campaign to liberate northern South America, he executed a mixed-race general on the grounds of insubordination, but spared whites who contested his leadership. After fighting Spanish imperialism, he wanted a major European colonial power to safeguard his new republic’s sovereignty. And most famously of all, a month before his death, the man who was a revolutionary leader for nearly two decades wrote, “He who serves revolution ploughs the sea.”

Bolívar left behind a vast written record of manifestos, speeches, and correspondence (the latter of which, he wanted burned after his death). Conn illustrates how this colossal canon allows Bolívar to be read as a dictator or a champion of liberty, a racist or a willing emancipator of African-descendants (pardos), a class-blind proponent of equality or a classist defender of the creole elite. Conn conveys that these inconsistencies created the conditions for the disparate interpretations of later generations.

After outlining this thesis and sketching biographical details, Conn studies the way Bolívar’s name was used by José Antonio Páez, Venezuela’s first president since secession from Bolívar’s Gran Colombia (present-day Colombia, Venezuela, Ecuador, Panama, and parts of Peru and Brazil). The book then explores Bolívar’s influence in Venezuela over the following hundred years, before turning to the Bolivarian narrative across the continent. However, Conn’s decision not to thoroughly examine Bolívar’s afterlife in the chavista movement—surely the most influential and contentious use of Bolívar’s name—is a glaring and incomprehensible oversight.

Although many leaders of the Bolivarian nations in the 1830s and 40s were keen to move on from the controversial figure of the Liberator, one of the few early devotees was Páez (president from 1830-35, 1839-43, 1861-63). A general in the independence campaign, Páez (who became Bolívar’s rival and prevented him from retiring to Venezuela in 1830), justified authoritarianism by invoking Bolívar’s support for a strong executive. In 1842, he repatriated Bolívar’s remains from Colombia. Venezuela’s “cult of Bolívar,” as it is sometimes called, had begun.

Antonio Guzmán Blanco, a strongman who dominated national politics from 1870 to 1888, enhanced the cult. Guzmán Blanco renamed the currency from the venezolano to the bolivar, decreed the Liberator’s birthday a national holiday, and created the National Pantheon—a church where he relocated Bolívar’s remains from the family mausoleum in the Caracas cathedral. Guzmán Blanco added an equestrian statue of the Liberator in the already-renamed Plaza Bolívar, adding others of himself around Caracas. It would take a hundred years before a Venezuelan politician made such a systematic attempt to present himself as the guardian and champion of the Liberator’s afterlife.

Although Conn does not analyze Hugo Chávez in detail, Chávez did more than anyone else to incorporate Bolívar into the national and regional conversation. Chávez’s interest in Bolívar was longstanding. In 1982, as a 28-year-old officer in the Venezuelan army, Chávez created a secretive cell within the military, the Bolivarian Revolutionary Movement (MBR). On December 17—the anniversary of Bolívar’s death—Chávez repeated Bolívar’s oath from 1805 that he would liberate the continent.

In 1992, the MBR attempted a coup against Carlos Andrés Pérez. Despite its failure, Chávez gained prominence, and described “General Simón Bolívar” as “the authentic leader of this rebellion.” It was a theme to which he would return constantly for the next two decades. On winning the presidency in 1998, he announced: “Venezuela is being born again. Once again the people of Simón Bolívar have shown themselves to be a grand people."

The Chávez government made real and symbolic changes to Venezuelan society, almost always under the banner of the Liberator. Chávez’s social welfare program was named Plan Bolívar and his overall project was called “the Bolivarian revolution.” Most symbolically, Chávez changed the country’s official name to “the Bolivarian Republic of Venezuela.”

For Chávez, an association with Bolívar was politically useful. He was regularly photographed or filmed in front of a portrait of the Liberator and left a chair empty at cabinet meetings to allow “the spirit of Bolívar” to enlighten his revolution. In 2010, following a tradition set by Páez and Guzmán Blanco, Chávez dug up Bolívar’s remains. Equating himself and his political movement with this figure, he tweeted, “Bolívar lives ... We are his flame!”

To reinter Bolívar, Chávez commissioned a $140m mausoleum in the center of the historic district of Caracas, moving his remains from Guzmán Blanco’s National Pantheon, where Bolívar had rested alongside other heroes of independence such as Páez, Francisco de Miranda, and Simón Rodríguez. In Chávez’s eyes, Bolívar was the preeminent Venezuelan hero.

Few projects symbolize more clearly a vision of a “great man of history,” yet such is the dominance of the chavista narrative within the Venezuelan Left that there has been little objection to it, even on Marxist lines. Chávez’s view of Bolívar not only contradicts the Marxist view that social forces, not individuals, create change; but also neglects the vituperative criticisms Marx himself made of Bolívar’s achievements and character.

Faced with the dominant chavista Bolívar, antichavistas have only occasionally referenced the Liberator. In 2013, Henrique Capriles called his election campaign team the Simón Bolívar National Command. When Juan Guaidó announced his interim presidency in January 2019, he was sworn in using a copy of the constitution that bore an image of Bolívar’s face. Moreover, none of this compares to the sustained Bolivarian narrative of Chávez. Perhaps the most common use of the Liberator’s name by exiles and the opposition is to refer to the ruling cadre as the “boligarchy.”

With his vision of Bolívar as a proto-socialist prevailing in Venezuela, Chávez cited the Liberator on the regional stage. He gave replicas of a Bolívar sword to international allies and, referencing Bolívar’s pan-Americanism, created a bloc of left-leaning countries called the Bolivarian Alliance for the Peoples of our America (ALBA). When he clashed with Colombia’s center-right-president Álvaro Uribe, Chávez saw a repeat of Bolívar’s feud with his New Granadan (Colombian) lieutenant, Francisco de Paula Santander. Conn writes:

“As Chávez had it, both Uribe and Santander were guilty of betraying Latin America to the United States: Santander, when he invited US representatives to attend the 1826 conference organized by Bolívar in Panama; Uribe, in his support of Plan Colombia.”

In this fraught diplomatic context, Chávez claimed that Bolívar had not died of tuberculosis, but had been murdered by the New Granadan oligarchy. The interpretation diffused into Venezuelan popular culture. In the film Libertador (released in 2013, the year of Chávez’s death), Bolívar dies of foul play. In this reading, which forgets that the ailing Bolívar was unwelcome in Venezuela, Colombia betrayed a Venezuelan hero.

When Colombian television channel Caracol announced a sixty-episode biopic of Bolívar co-produced by Netflix, Chávez’s successor, Nicolás Maduro, was quick to allude to the New Granadan expulsion of Bolívar from Bogotá in May 1830. “How many lies, defamation and trash will they put in the Bolívar miniseries [sic]?” he asked. “We have to come to the defense of Bolívar against the lies of the Colombian oligarchy.”

All this makes Conn’s omission especially odd. Indeed, the chavista reading of Bolívar offers substantial support for Conn’s thesis that, when it comes to legacy, “Bolívar’s interpreters have become as important as Bolívar himself.”

As Conn does address, Bolívar’s legacy is just as complex in neighboring Colombia. During Bolívar’s lifetime the New Granadan elites were divided between those who favored Bolívar’s Conservative Party and the Liberal Party led by Santander. As Conn explains, this division between the nation’s two founding fathers has helped prevent party-political cults of Bolívar. In Colombia, Bolívar can stand as the Liberator and Santander as the Lawgiver.

Bolívar has, though, been an icon for Colombia’s guerrillas. Most famously, the M-19, a group founded following suspected fraud during the 1970 presidential election, stole his sword from the Quinta de Bolívar in Bogotá in 1974. They returned it to the state after demobilizing in 1991. As Conn suggests, most important to the rebel groups is Bolívar’s vision of a unified continent rising up against local elites, and his statements concerning the necessity of a “war to the death” during his invasion of Venezuela from New Granada in 1813.

Literary figures have also been drawn to the richness and paradoxes of the historical Bolívar. In The General in his Labyrinth (1989), Gabriel García Márquez depicts him as a flawed Romantic hero. As Conn writes, García Márquez “created a tapestry that permits the reader to see Bolívar’s figure in the light of all the major issues concerning modernity that are important to the author, including gay subjectivity, gender, race, social class, capitalism, and U.S./Latin American relations.” Like Páez, Guzmán Blanco and Chávez, García Márquez recast Bolívar for his own purposes.

It is another literary figure who provides arguably the most balanced and nuanced view of the Liberator. Conn shows us the Bolívar of the Cuban poet-patriot José Martí, a Bolívar who, for all his transcendental achievements, deserves to be expelled from Gran Colombia for his dictatorial spell. However, in a new interpretation offered by Martí, it is not the Colombian or Venezuelan elites who reject the Liberator, but the masses.

While Conn’s 525-page book provides excellent historical context, by devoting very little space to Bolívar’s afterlife in the chavista movement, Conn neglects the opportunity to contribute a thorough study of the most influential use of Bolívar’s legacy.

Chávez’s Bolívar is a nationalist, proto-socialist, anti-imperialist “great man of history.” Today, as countries around the world confront the way they present the past, the Left should be wary of “great man” doctrines and the personalismo that can accompany them. “Great men” like Bolívar are complicated human beings. As Conn demonstrates, it is the very complexity of Bolívar’s earthly life and thought that has made them such fertile ground for reappraisal. Indeed, Bolívar’s afterlife says more about his resuscitators’ motivations than of Bolívar himself.

Daniel Rey is a British-Colombian writer and historian. He will begin an MFA in nonfiction at NYU in January.