The landslide MAS victory comes as a sigh of relief after signs of voter intimidation and a year of democratic rollbacks and human rights abuses. 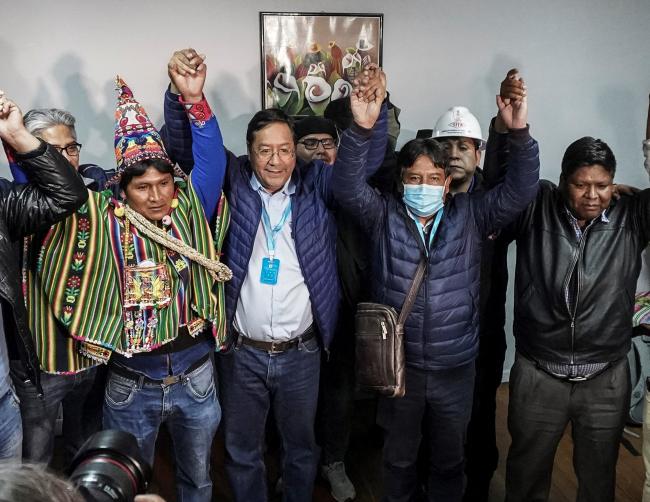 After a year of turmoil, political repression, and corruption, Bolivians overwhelmingly voted back into office the same progressive political party that was ousted a year ago. Former Finance Minister Luis Arce Catacora and his vice-presidential running mate, former Foreign Minister David Choquehuanca, from the Movimiento al Socialismo (MAS), are predicted to have over 52 percent of the vote once all the polls report.

Midday on Monday, October 19, their closest rival, former president Carlos Mesa, expected to come in a distant second with about a third of the vote, conceded defeat. Conservative interim president Jeanine Áñez also recognized the MAS victory. In an ironic tweet given the anti-democratic behavior of her government, she wrote, “I congratulate the victors and ask them to govern thinking of Bolivia and democracy.” Later that day the Trump administration recognized Arce and Choquehuanca’s victory.

Third place in the election, at about 14 percent of the vote, went to the far-right candidate Luis Fernando Camacho, who was instrumental in the ouster of President Evo Morales on November 10 last year.

“The results of this election signal a robust repudiation of their project,” said Kathryn Ledebur of the Andean Information Network, referring to the Áñez government. “People may have been too scared to speak out against the Áñez government repression and corruption, but this result shows they voted their conscience.”

Evo Morales handpicked Arce, 57, as the presidential candidate from Buenos Aires, over the objections of a considerable contingent of grassroots MAS party members. In contrast to Aymara activist and Vice President-elect David Choquehuanca, Arce, a UK-trained economist, lacks any history in the country’s social movements. Rather, he successfully managed the Bolivian economy for almost 14 years in a period of unprecedented growth and poverty reduction.

He told the New York Times, “I have no interest in power. I want to move the country forward, leave it in the hands of young people, and I’ll go.” Arce promised to “govern for all Bolivians” and “build a government of national unity.”

After weeks of mounting tension and at least 41 incidences of political violence, according to the United Nations High Commission on Human Rights, voting on Sunday October 18 was remarkably peaceful. Election observer Doug Hertzler of Academics for Democracy in Latin America and the Caribbean reported that in the city of Santa Cruz, “in some pro-Camacho neighborhoods MAS could not get people to volunteer as delegates at tables, but they still pulled in 30 percent of the vote.” 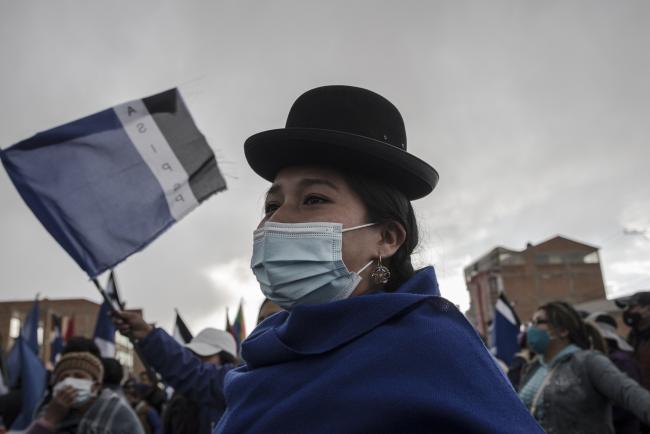 Fears of repression spiked when police illegally picked up Argentinian national deputy Federico Fagioli when he arrived in Bolivia as an electoral observer. He was subsequently released. Áñez repeatedly called the former MAS government a “dictatorship” and Morales a “tyrant” leading up to the elections.

Trust in the electoral process was already low with a poll published October 10 showing that only 40 percent of Bolivians believed that the electoral tribunal is honest. The day before the October 18 election, repeated accusations of fraud led the tribunal’s president Salvador Romero to cancel the quick count system, further undermining public confidence.

Since Evo Morales’ ouster last November, after weeks of protest following the contested election, Bolivia has been more polarized than since its return to democracy in 1982 after 18 years of military dictatorship. Morales fled the country after the Organization of American States (OAS) deemed that the 2019 elections showing him the winner were fraudulent. Subsequent statistical research found the OAS accusations of fraud dubious at best.

The far-right installed Jeanine Áñez in the presidency after the police mutinied against Morales. The Áñez government proceeded to unleash weeks of repression against MAS supporters in the name of pacifying the country. The scars of massacres in Senkata, El Alto and in Sacaba that left at least 26 dead and 700 wounded remain raw. “The military and police immediately started firing,” said an older woman in Senkata who did not want her name used. “I saw more than 25 people shot.”

Numerous corruption scandals plagued the interim government, including a fraudulent multi-million dollar purchase of ventilators that forced the resignation of the health minister in the midst of the Covid-19 pandemic. Áñez repeatedly used the pandemic to consolidate her own political project and as an excuse to delay elections. But her government was so unstable that in less than a year, she had 34 different cabinet ministers. Áñez’s right-hand, Minister of Government Arturo Murillo, threatened to destroy the MAS by any means possible, peddling a toxic brew of racism and neoliberal economic orthodoxy

Arce and Choquehuanca will take over a country in dire economic straits. With the Covid-19 pandemic, the economy had contracted by 7.9 percent by the end of September, the deficit had mushroomed, and unemployment skyrocketed. Before Covid-19 hit, the country grew at an annual rate of over 4 percent per year from 2008 on, thanks to a boom in commodity prices and increased taxes on natural gas.

Arce has announced plans to confront the current crisis by expanding biodiesel production and industrializing Bolivia’s lithium reserves, which are the world’s largest. Both these options raise the kinds of environmental concerns that plagued the Morales government, particularly in later years. Biodiesel can worsen deforestation and Bolivia already suffers the highest rates in South America. Lithium production requires elevated amounts of water. But Juan Carlos Pinto, who worked in the vice presidency for five years under Morales and has not taken a role in the new government, believes the administration will bring the MAS discourse in favor of the environment in greater harmony with actual policies. “We really want to advance in developing alternatives,” he said. 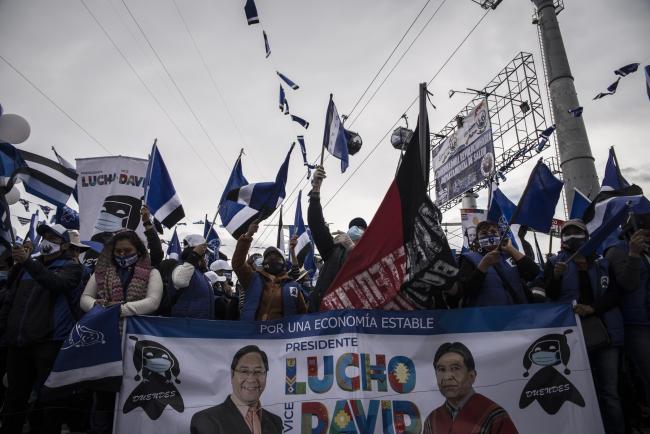 Keeping the charismatic and powerful Morales in check may prove a significant challenge. His decision to run for a fourth term, in violation of Bolivia’s constitution and a 2016 referendum on the issue which he lost, provoked the crisis after the November 2019 elections. “He should have resigned and then he would have been a hero,” said Cochabamba nurse Maria Rodriguez. “But he wouldn’t give up power.”

Both Arce and Choquehuanca have said repeatedly that Evo and his ministers will have no part in their government. Juan Carlos Pinto says, “We must strengthen mid-level leadership to succeed. We need many Evos, not just one.”

Several immediate challenges face Arce and Choquehuanca when they take office November 14. First, and perhaps the most worrying, is that the right-wing firebrand and third-place finisher Luis Fernando Camacho has not yet recognized the results. The other wildcards are the police and the military, who were critical in the ouster of Morales last November. Camacho has openly bragged that he bribed the police with promises of increased retirement pay and that his father convinced the military to abandon Morales. The Bolivia Information Forum estimates that 4,000 more troops were in the streets for this election than the one a year ago.

The resounding victory is a clear signal of what type of government Bolivians want going forward. “With David by my side…and with the social organizations we are responsible to…we promise to put an end to the uncertainty of the past 11 months,” Arce said on election night at his campaign headquarters. “We are going to restart our process of change without hate…and by recognizing and overcoming the mistakes we have made in the past.”

Linda Farthing is a journalist and researcher. She is co-author of three books on Bolivia and has written for the Guardian, the Economist, Latino USA, Al Jazeera, and the Nation.

Thanks to Amy Booth in La Paz for her help with this article.