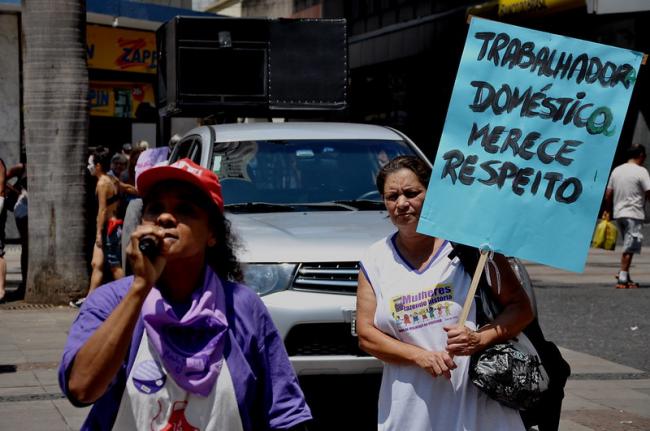 In March, Rosalia Alves’s workplace became her de facto home. The son and daughter of a couple in their late 80s and early 90s living in the northern Brazilian state of Tocantins needed a caregiver and Alves was looking for clients.

With the surge in coronavirus cases, they proposed to Alves that she stayed in their parents' home with little to no connection with the outside to reduce the risk of infection. Out of sheer necessity and a sense of duty, Alves took the deal. "These days, everything that comes our way is a good thing," she says.

Alves, 56, has been a caregiver since her early twenties and is used to the long shifts and arduous work that come with tending to seniors, a "calling" she's deeply passionate about. But in all those years she had never had to remain in a residency for more than a week at a time without a break—until Covid-19 came along. For 90 days straight, Alves did the work once performed by three different employees. The family dismissed two other employees when the coronavirus outbreak hit.

Accounts by domestic workers of precarious working conditions, arbitrary pay cuts, layoffs, and even compulsory quarantine have become widespread across the country in the past eight months. Although it can be hard to quantify it, union leaders and labor lawyers defending workers' rights are anecdotally reporting an increase in complaints about longer hours and situations analogous to false imprisonment. Caregivers like Alves, mostly women of color, are employed in upper middle class family homes, and usually live in the outskirts of cities and in favelas. They have long been among the most vulnerable but now are facing an impossible choice between exploitative arrangements and risking their livelihoods by becoming unemployed.

"The condition is take it or leave it," Luiza Batista, president of the National Federation of Domestic Workers (Fenatrad), says. "Those who think twice usually submit."

The man Alves cared for in Tocantins demanded more attention: She had to get him out of bed, put him in a wheelchair, bathe him, change his diapers and clothes, transfer him back to the wheelchair, feed him breakfast, and move him close to the windows for a sunbath. By the time she was done, it was only lunchtime. On top of the usual tasks of a caregiver, Alves also cooked and cleaned the house. She was paid a little under $400 a month, a fraction of what her employers put towards the same services before the pandemic.

Alves says she didn't get any days off work, nor was she compensated for the 12 weekends she labored away. Her attempts to negotiate a higher rate fell on deaf ears. During three months, Alves' interactions were limited to the couple and the family's driver, who would take her to check on her own home every eight days for about two hours, after which she went back to looking after someone else's loved ones full-time.

"I treated them as if they were my own parents," Alves says. "But when the family asked me to stay for another month, I said I couldn't do it anymore. It was just too much."

Caregivers are part of a fast-growing workforce in Brazil's predominantly informal care economy. As the country's elderly population continues on an upward trajectory to surpass the number of children and teens in the next decade, more senior citizens are likely to require assistance for everyday necessities. The pandemic has only underscored this demand.

Still, their labor is often made invisible. Caregivers for the elderly and people with disabilities weren't officially deemed essential during the public health emergency period before July. With lockdown measures restricting transit, many caregivers without a formal contract to prove their employment as essential workers struggled to access public transportation and needed a special declaration to get to work in cities like Rio de Janeiro. They also faced additional challenges to be made a priority for Covid-19 testing. Others were fired without access to pay or benefits due to the possibility of falling sick and exposing their employers to the coronavirus.

That was the case of Mariana de Oliveira Alvarince who was let go by her employer for 20 days after sneezing as a result of an allergy. With an income based on hours worked, she spent all of her savings to make ends meet.

Another caregiver, Vanda Matos Costa lost a recurring job she had for three years after refusing to take on shifts for two months with no time off. "I counted on that money every week and suddenly they called me saying I didn't have to show up anymore," Costa says. She has since had to rely on the roughly $110 installments of the federal government's emergency financial aid for informal workers. "It's my only source of income right now."

Brazil has one of the world's largest contingents of domestic workers with more than six million people. Between 2013 and 2015, after years of labor organizing, they secured the same rights enjoyed by other workers, such as a maximum workday of eight hours and a 44-hour week, minimum wage, lunch break, and access to social security. The existing legislation, however, hasn't translated into the regularization of most domestic workers and, as of 2018, less than 30 percent had established formal employment relationships. To make matters worse, that workforce has lost more than 1.2 million jobs since the beginning of the pandemic.

"Because employers often do not register these professionals, they end up having their rights usurped," labor lawyer Jales Soares da Silva says. "This pseudo-culture that domestic workers should not have formal contracts continues to prevail." 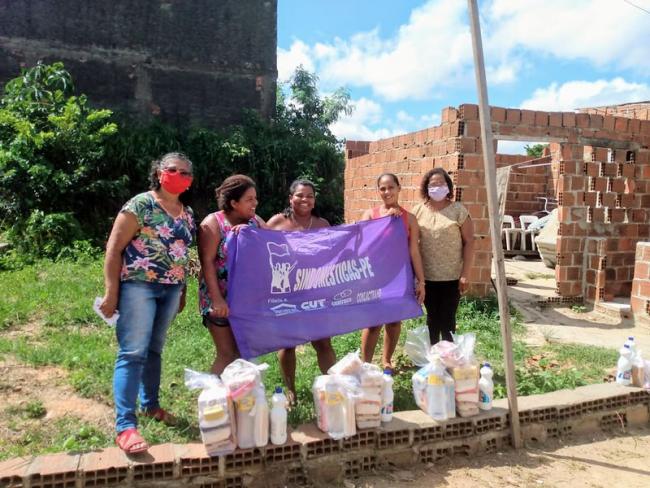 That persisting informality contributes to discouraging domestic workers from reporting already difficult to investigate violations committed by employers as private actors inside their homes. For caregivers, a hybrid category that often ranges from nurses protected by a federal council to those who only fall under the umbrella of domestic work, it can be even harder to draw the line between acceptable and exploitative agreements.

"That person becomes absolutely vulnerable," says Márcia Soares, lawyer and executive director of Themis, an organization addressing discrimination against women in the justice system that recently launched a campaign for the rights of domestic workers during the pandemic. "It's an anomaly because they do a particular job and often undergo specific training and their work should be recognized as that of caregivers."

In 2019, President Jair Bolsonaro vetoed a proposed bill aimed at formalizing the occupation of caregivers and setting forth attributions and requirements, including that they finish elementary school and take a qualification course. Bolsonaro, who as a congressman voted against the constitutional amendment on domestic work, argued that the legislation would restrict the freedom of professional practice. Even though that bill didn't draw unanimous support, most Brazilians appear to approve a law to regularize caregivers, which proponents argue could also help strengthen their ability to organize as workers.

Because of social distancing, many trade union leaders and presidents of local associations had to close their offices and move their meetings, trainings, and information sessions about social security, labor rights, and safety in the workplace online. Thousands of caregivers are sharing best practices and passing along recommendations for potential clients on WhatsApp and Facebook groups. These solidarity networks also serve as a lifeline for workers dealing with the emotional toll of having to rent a hotel room for weeks to avoid infecting family members or being so overworked and stressed to the point of experiencing hair loss.

"The impacts of the pandemic on the physical and mental health of paid caregivers should not be underestimated," says Daniel Groisman, a professor and researcher at the Oswaldo Cruz Foundation's Joaquim Venâncio Polytechnic School of Health. He is currently coordinating the first nationwide survey on the health and working conditions of both family and paid caregivers during the pandemic. Initial findings from the first month of research based on information provided by almost 3,000 caregivers show that 41 percent of paid workers saw their income go down and at least a third of them reported feeling sad or depressed many times.

"It's not possible to promote good care without also looking after those who provide care," Groisman said. "Brazil has a markedly familiar regime of care," he says, in which the state takes limited responsibility and overburdens individuals. This draws from the notion that caregiving is an expression of female nature, reinforcing gender role stereotypes that exploit the unpaid labor of women.

Among Latin American nations, Uruguay stands out for implementing national public policies aimed at fostering the right to care for the most vulnerable, while also acknowledging and challenging the ways in which gender bias has perpetuated inequality in the distribution of that labor. So far in Brazil, bills promoting policies for care have by and large failed to gain traction, despite an ever-increasing need for them. The lasting effects of an unchecked pandemic and economic recession are likely to exacerbate the care economy crisis, plunging domestic workers like Alves into deeper informality and unemployment.

Alves is always looking for work. "Whenever they call me, I'm ready," she says. "I'm 56 but I can handle work. Caring for the elderly is a delicate thing, you need to have love, patience, humility, and health. But it's also heavy so you have to dedicate yourself to it." Alves has again received propositions to care for seniors for long stretches of time, but she is now determined to negotiate better deals for herself, whether that looks like higher compensation or a formal contract.

"Even without greater knowledge, we're aware of what is happening, of what we're losing," she says.

Isabela Dias is an independent journalist based between Brazil and the U.S. and writing about immigration, human rights, and Latin America.

Barbara Barcia is a Brazilian journalist and co-founder of FLUXA Filmes, a women-led multimedia company focused on female narratives.