The Specter of Colombia in the U.S. Presidential Election

Both Trump and Biden have played on tropes of socialism and Latin American strongmen without providing substantive policy proposals for the region. 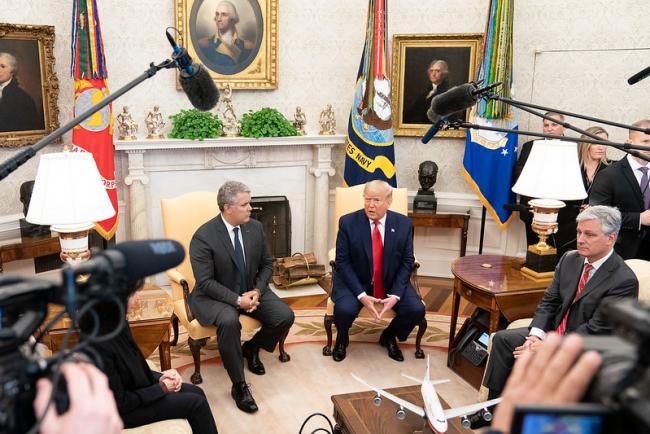 In the final weeks before the U.S. elections, President Donald Trump found a new topic for his frequent Twitter rants: Colombia and its former President Álvaro Uribe.

On October 10, in the first tweet, President Trump congratulates Uribe on his release from house arrest, calling him a hero and an ally in the fight against “Castro-Chavismo.” In a second tweet, President Trump calls Joe Biden a puppet of the “Castro-Chavistas like Crazy Bernie, AOC, and Castro-lover Karen Bass.” He then attacks Joe Biden for receiving the support of former Colombian Presidential candidate and now Senator Gustavo Petro, using Petro’s past as a member of the M-19 Guerilla organization to try to delegitimize his current political career. The stakes are high for these political figures in Colombia; last week two members of Colombia Humana, Petro’s political party, were murdered, including his former campaign manager in the Cauca department, Gustavo Herrera.

These blatant attacks on the sovereignty of Colombia’s judiciary and electoral systems are not new, and form part of a pattern of Trump criticizing the Colombian Left and the peace process since late September. His opponent, former Vice President Joe Biden, has also played on fears of the Left in Latin America. The specter of “Castro-Chavismo'' haunts liberal attack ads and Spanish language op-eds against Trump. Neither candidate has proposed significant U.S.-Colombia policy change, indicating that a militarized antidrug strategy will remain the centerpiece of the bilateral relationship. Nonetheless, as social movements are under attack in both countries, solidarity and grassroots alliances are more important than ever.

Uribismo and Foreign Involvement in the Elections

Former President Uribe was under preventive house arrest after he was alleged to have manipulated witnesses. Leftist Senator Iván Cepeda has lead the efforts to expose Uribe’s alleged ties to paramilitary groups. The case is ongoing, but Trump’s vocal support for Uribe shows that the United States government stands behind him regardless of what the Colombian people decide. This is a clear threat to the sovereignty of Colombia’s judicial system. Prominent Florida Republicans have threatened Senator Cepeda with what are clearly false accusations of connections to FARC dissidents.

Trump’s support for Uribe is one of a series of attempts to undermine the peace process in Colombia. Most recently, Trump used a Florida rally to attack the 2016 Peace Accords, stating that the Obama administration “surrendered to the narcoterrorists” in Colombia. Trump then praised his administration's work “combatting narcotraffickers” and increasing the U.S. military presence in Colombia. The oversimplification that violence in Colombia is just caused by “narcoterrorists” is used to justify more unsuccessful militarized intervention. This mindset alsooverlooks the violence of U.S. economic policy in the country and the ways in which U.S. policy has undermined peace efforts.

While “Castro-Chavismo” is new to Trump’s vocabulary, it is a common tactic for the Right throughout Latin America, including Colombia, to scare voters. The rhetoric is now being used to court right-wing Latin American voters in South Florida. According to a report by Miami radio station WRLN, right-wing elected officials in Colombia have been actively involved in creating a campaign of fear around socialism and falsely claiming that Joe Biden will bring the socialist policies of the late Venezuelan President Hugo Chávez to the United States.

The report quotes Centro Democrático Congressman Juan David Velez on his role campaigning for Republican politicians in South Florida. Velez claims to be campaigning against the “radical socialist left,” and echoes the same national security doctrine talking points that the United States has imported to Latin America since the Cold War.

The WRLN report connects the emergence of the boogeyman of "Castro-Chavismo” in South Florida to a visit by Uribe to Doral, Florida in 2016, where he campaigned for Centro Democrático and blasted the 2016 Peace agreement together with Republican politicians Marco Rubio, Mario Diaz-Balart, Carlos Curbelo, and Ieana Ros-Lehtinen. After Uribe used this visit to paint the agreement as a victory for the FARC and the first step to converting Colombia into a second Venezuela, conservative politicians realized that they could use the same scare tactics in affluent Latino communities in South Florida to garner support for Trump and other Republican politicians.

Republicans have dominated the use of the “Castro-Chavista'' boogeyman through speeches and political ads that falsely compare Joe Biden to a wide variety of Leftist leaders in Latin America from Castro to Chávez to Petro. But they have not been alone in using these scare tactics. For instance, a June ad from the Joe Biden campaign shows footage of police repressing protesters ending with the text “Fidel, Chávez, Maduro, Trump, Caudillos de la misma tela,” (Fidel, Chávez, Maduro, Trump, Strongmen cut from the same cloth). While anyone with a basic knowledge of Latin American history knows that Trumpism is the opposite of the egalitarian ideals that Fidel and Chávez stood for, the Biden campaign also hopes to cash in on the anti-communist hysteria that the United States exported to Latin America.

U.S.-Colombia Relations Under a Biden Administration

Beyond right-wing scare tactics and the legacy of the national security doctrine, actual policy proposals that candidates have put forward regarding Colombia are scarce. Trump’s campaign website does not mention Colombia. But his criticism of the 2016 Peace Agreement in recent speeches and the administration’s adamant support to the Colombian military show that he will continue a policy of further militarization of the region.

Biden’s campaign website also has no specific mention of Colombia. His Latin America foreign policy proposals focus on Central America and migration. However, on October 7, Biden wrote an op-ed in the Colombian newspaper El Tiempo highlighting his plans for United States-Colombia relations as president. The op-ed does not mention Colombia’s Peace Process or use the word peace at all. He opens the op-ed attacking the now defunct M-19 for the takeover of the Palacio de Justica (Supreme Court) in Bogotá in 1985. He writes that this was the moment he decided to work on U.S.-Colombia relations in the Senate. He praises his role in the implementation of Plan Colombia, the huge U.S. military aid package that was accompanied by human rights abuses and the false positive scandal under President Uribe, where the army murdered civilians and dressed them up as guerillas to boost their number of kills. Democratic congressman Rubén Gallego and Gregory Meeks echo this sentiment in an op-ed attacking Colombian interference in the election while hoping to save bipartisan support for military aid for Colombia.

As John Washington outlines in The Intercept, Biden should be ashamed of his role in Plan Colombia, not bragging about in op-eds and on the campaign trail. Unfortunately, Biden’s stance is in line with his general disconnect from the realities of the War on Drugs in Latin America and the criminalization of communities of color in the United States that he promoted while in the Senate. As Dawn Paley highlights in her book Drug War Capitalism, Plan Colombia and the supply side focus of the War on Drugs has had little impact in stopping the flow of drugs into the United States. It has played a much greater role in promoting neoliberal economic policies and securing the extraction of resources from Colombia by multinational corporations. This goes without mentioning the immense human cost that Plan Colombia had in the form of forced displacement, human rights abuses, and corruption in the military.

At a time when a record number of human rights defenders and demobilized guerillas are being killed in Colombia, neither presidential candidate offers much hope for substantial change in U.S.-Colombia policy. Through blatant disregard for the sovereignty of Colombia’s institutions and open disdain for the country’s 2016 Peace Agreement, Trump has shown that he supports the far-right narrative of the national security doctrine and the erosion of democratic norms in both Colombia and the United States. Biden’s views on U.S.-Colombia relations remain stuck in the past and support policies that have enriched a small elite while further marginalizing large parts of the population.

It is more important than ever for those in the United States to continue to show solidarity with the people of Colombia and build links between struggles here and there. Now as the phenomena of right-wing paramilitary violence grows in places like Wisconsin and Michigan and the national security doctrine is deployed against the Black Lives Matter movement and leftists, North Americans have much to learn from the long history of struggles against fascism and imperialism in Latin America.

Cruz Bonlarron Martínez is the Co-Director of the Witness for Peace Solidarity Collective’s Colombia Program.