The parliamentary elections on December 6 will define the alignment of political forces for many years to come. 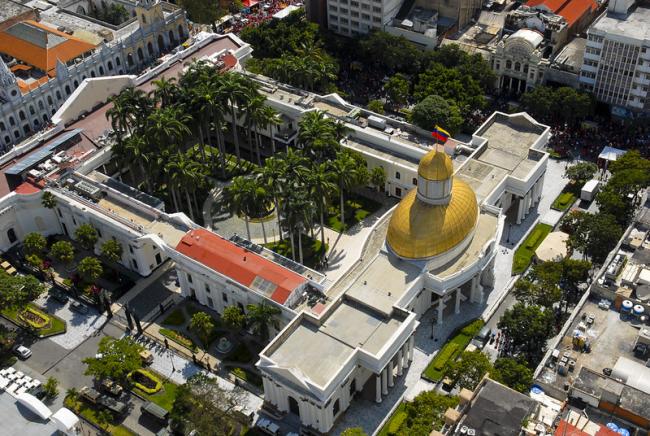 Venezuela’s parliamentary elections mark the end of an era during which the opposition and more than 50 countries around the world have rejected the government’s legitimacy. This period began with the 2018 presidential election and Juan Guaidó’s claim to interim government beginning in 2019, which was accompanied by a series of violent events, including the attempted military coup April 30, 2019, threats of intervention from the U.S. Southern Command, and radical opposition calls for popular insurrection openly supported by Washington. Absolutely all these attempts failed.

These years have also been marked by the government’s political control measures, such as the disqualification of candidates and intervention in political parties, including naming members to their governing boards.

Venezuela now faces a major political skirmish in the midst of an unprecedented crisis produced by the demise of the country’s oil industry and the financial blockade. These developments have changed the geopolitical focus on Venezuela, as well as its culture and economy. For the first time, the country’s income—though diminished—does not depend on oil revenues, but rather on remittances, gold sales, and other sources that did not have the same significance a few years ago.

This is a Venezuela that is, at least for now, post-oil, and it should be considered as such.

This is also a Venezuela that faces the Trump government’s aggressive policies. His administration gave the green light to hawkish Republicans—like Vice President Mike Pence, Secretary of State Mike Pompeo, Treasury Secretary Steven Mnuchin, and U.S. envoy for Venezuela Elliot Abrams—to develop a sanctions policy unseen on the continent since the 1960s.

And this is a Venezuela with a government that has suffocated any options for political change and that has been incapable of confronting the economic crisis with any other solution than the typical neoliberal prescription.

Could the parliamentary elections change the country’s state of affairs? There are four possible scenarios. The results of the December 6 election could: strengthen the electoral opposition; lay bare a rupture within Chavismo due to the current rift between the government and some of its historical allies; greatly increase abstention rates, revealing Venezuelans’ discontent with the political system; or—and this is the most probable outcome—end up consolidating the Chavista government’s total political dominance. Let’s begin with the most likely scenario.

The governing party, the United Socialist Party of Venezuela (PSUV), has a significant base, thanks to both the mark left by Hugo Chávez and the party’s ground game. Although it’s possible the PSUV won’t benefit from the level of mobilization achieved in the 2018 presidential election—a little more than six million votes—it can expect at least some five million votes out of a voter list of more than 20 million. If abstention is high, that would be enough to win.

With nearly all opposition leaders calling for abstention, Chavismo could reclaim the parliamentary majority it lost to the opposition in the 2015 elections without major obstacles—especially after Guaidó’s interim government’s politics proved ineffective and all attempts at overthrowing Maduro failed. The opposition issued the call for a boycott without a clear strategy for achieving concrete objectives outside the current electoral system.

A comfortable electoral victory for the governing party would allow it to take control of the one public power that has evaded it, and this could prolong its political dominance. In turn, the new National Assembly will have the power to appoint almost all public authorities. The officials to be named to the National Electoral Council, public prosecutor’s office, comptroller, and the human rights ombuds office will serve until the second half of this decade, while the Supreme Court justices named will remain, by law, until the beginning of the 2030s.

Without a doubt, the abstention pushed from Washington and by Venezuela’s radical opposition sectors could enable a clear government victory. Something similar happened in 2005 when the opposition agreed to boycott the election: Chavismo won total control. This allowed Chavista forces to govern with stability, even when they lost elections, due to their comfortable majorities in positions of public power.

In the 2018 elections, the opposition again called for a boycott, and President Maduro won reelection without hurdles.

Neither the 2005 abstention rate of 85 percent nor the 2018 rate of 54 percent managed to destabilize the government’s power or to delegitimize it. Rather, abstention continues to be a very abstract construct that has nothing to do with existing power structures.

Many countries did not recognize the results of those two elections and engaged in open conflict with the Venezuela government. Such confrontation contributed to a financial blockade, which has worsened the economic crisis, but hasn’t weakened the government.

Across the Americas, presidents recently have fallen for diverse reasons, but in Venezuela the upcoming elections could reinforce the level of political stability President Maduro has already demonstrated.

Is there another option?

The moderate opposition participating in the election is counting on an outcome that will block the governing party from winning a majority. This would also show the world a different approach to the conflict with the government that doesn’t rely on overthrow attempts. This faction also hopes that the new government of U.S. president-elect Joe Biden will represent a change in relations with the opposition and reduce aggression while supporting political solutions to the conflict.

U.S. sanctions have hit this political sector. In September, the U.S. Treasury Department sanctioned five opposition leaders once they decided to participate in the elections. Among others, Bernabé Gutiérrez, interim secretary general of Democratic Action, the most-voted opposition party, faced sanctions. National Electoral Council president Indira Alfonzo and official José Luis Gutiérrez, whose position was negotiated with moderate opposition sectors, also received sanctions. By order of the Treasury Department’s Office of Foreign Assets Control, these officials cannot hold accounts or properties in the United States, which could also take effect in allied countries.

Whether this faction of the opposition can achieve its desired result will fundamentally depend on voter turnout. But this election has seemed to generate little interest among anti-government voters systematically discouraged by both the radical opposition and the government.

The Supreme Court intervened in some opposition parties, throwing out their visible leaders and naming new ad hoc governing boards. As a result, the ballot is full of parties whose leaders are calling for a boycott, like Democratic Action, Copei, and Popular Will.

The results will show whether the opposition’s voter base preferred to vote for their parties or decided to follow the call from their leaders to abstain. But first they will have to face their latest main enemies: the megazolanos.

The staunchest enemy of the parties that make up the electoral opposition at this moment are the megazolanos, the name for the radical Venezuelans living abroad, especially in Florida, who supported Donald Trump. These voters openly advocate for U.S. military invasion and consider the Venezuelan opposition’s participation in the elections to be “collaborationist” or “selling out.” This is white Trumpism from abroad that uses its veto power on social media to annihilate not only Chavismo, but also the political opposition.

Now that Trump has lost the election, this sector seems to be left politically orphaned, but it still retains significant economic and media power.

Guaidó, for his part, is organizing a popular consultation concluding December 12 that will ask voters whether or not they reject the December 6 parliamentary elections—a call that no other opposition leader backs.

The Trump era spelled the opening of a war scenario for Venezuela. The sector that systematically calls for abstention without creating political alternatives enthusiastically encouraged this conflict.

This sector’s discursive aggression could be perpetuated if abstention levels are very high. That outcome won’t have a legal or real political impact, but it could hinder the normalization of relations between Venezuela and other countries.

Little stands between the governing party and victory in the parliamentary elections—except for two unprecedented situations that could undermine its shot at controlling the legislature and the rest of the public powers.

First, the heterodox model Maduro adopted to confront the economic crisis and the sanctions has strengthened the dollar and increased imports. At the same time, this situation has weakened the national economy, the bolivar, and the social institutions created by Chavismo, as well as the social missions, food distribution, housing plans, and so on.

The government has had to swap its story about economic nationalism and condemning internal economic factors for rhetoric legitimizing dollarization and placing the blame on the economic blockade.

Second, the government faces a cleavage: various minor yet historic leftist parties have broken with Maduro and launched bids on their own accounts. These include the Popular Revolutionary Alliance, a coalition of parties, movements, and leaders that are using the acronym and registration of the Venezuelan Communist Party (PCV). The PCV, which is part of this alliance, is the only party from this sector that didn’t face Supreme Court intervention this year and that therefore has been able to get on the ballot.

In contrast, other dissident Chavista parties that are part of this coalition such as the Patria Para Todos party (PPT) and Venezuelan Popular Union (UPV), among others, have faced intervention. In the case of both the PPT and UPV, the Supreme Court named new ad hoc governing boards to ensure that they would participate as part of the government’s electoral alliance, Gran Polo Patriótico.

Despite these pitfalls, and barring any surprises, the lack of opposition participation in the elections clears the path for the governing party to secure a solid majority in the National Assembly and reestablish its political hegemony in the face of the 2024-2030 presidential term. This is all within a context of relatively low voter participation, especially compared to the parliamentary elections in 2015, when 74 percent of voters participated, and in 2010, when turnout was 66 percent.

If there are no surprises, the PSUV will achieve total political dominance over the country via an electoral route. This would offer a consolidation in the style of Mexico’s Partido Revolucionario Institutional (PRI), which governed the country for many decades practically without opposition. In the meantime, in Venezuela, the radical and powerful opposition must settle for making its moves from Miami or Bogotá while waiting for new signals from Washington.