The War on Cuba Documentary Tells the Story of the U.S. Embargo

The Belly of the Beast collective explains how they are creating responsible media about Cuba and depicting the impacts of U.S. policy. 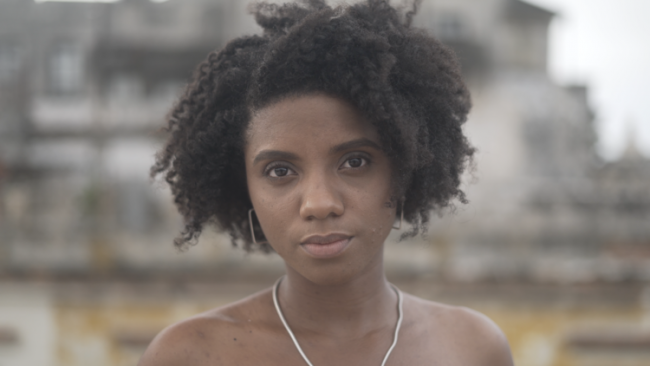 “The War on Cuba” documentary opens along Havana’s iconic Malecón, a long stretch of road winding along the coastline of the Cuban capital. A yellow almendrón, the affectionate term for old cars in Cuba, carries the film’s narrator, Liz Oliva Fernández, down the coast. She is perched on the back seat, wearing a wide-brimmed sun hat, and ironically carrying a selfie stick. Fernández’s dialogue debunks the romanticized vision of an idyllic, old Havana that the media often perpetuates.

“People come to Havana looking for the real Cuba and this is what they do,” Fernández says in the first episode of the documentary. “But this is not my Cuba.”

“The War on Cuba” is a three episode documentary telling the story of Cuban people and the impact of the 60-year U.S. blockade. It winds between interviews with Cubans and broader histories of U.S. propaganda, oil sanctions, and the campaign against the Cuban medical system, doctors and medical brigades.

Fernández alternates between Spanish and English in her narration and speaks to fellow Cubans in a casual, conversational tone that makes the film feel deeply personal and at once expansive. She sits in a chair in front of a television and expresses frustration with the media’s one dimensional focus on the U.S. sanctions; at a kitchen table, she asks her mother about her choice to leave Cuba and serve as a doctor in Venezuela when Fernández was 10 years old; she inquires  about the availability of various medicines at a pharmacy counter and is told each time that the drugs have run out. The film presents compelling, digestible background information in the spirit of investigative, deeply-researched journalism. But its true draw is its cinematography and the thoughtful, humanizing attention given to the people Fernández speaks with, whose lives have been touched by a devastating blockade for decades. “The War on Cuba” centers interviewees and Fernández as true experts on the relationship between Cuba and the U.S.

The documentary was filmed during the pandemic and released in October by Belly of the Beast, a collective made up of Cuban and U.S.-based  journalists and activists that seeks to tell stories about Cuba from a grassroots, independent perspective. The documentary is the collective’s first major project, and an example of its commitment to shape its journalism around Cuban voices and provide context in a media landscape heavily influenced by state interests.

I spoke with members of Belly of the Beast about the process of making “The War on Cuba,” launching an independent media outlet in Cuba, the feedback they get from Cuban listeners, and what stories they are considering pursuing in the future.

This interview has been edited for length and clarity.

JT: Belly of the Beast launched as an independent collective and began telling people-centered stories by Cubans right around the beginning of the pandemic. What inspired its formation? What were your initial conversations about goals and intentions for the collective like?

Belly of the Beast: Belly of the Beast was inspired by the dearth of responsible and impactful media coverage of Cuba and U.S.-Cuba relations. Cuba is a fascinating country due to the unique experience of its revolution–it’s the only country in the Western Hemisphere to have openly defied U.S. hegemony for the last 60 years and as a result it continues to face the longest trade embargo in modern history. Cuba also has an outsized influence around the world and in the United States. In the recent U.S. presidential election, Trump won Florida thanks to support he garnered from Cuban-Americans who favored his hardline Cuba policy.

Despite Cuba’s importance, media coverage of the island is severely lacking. In our initial conversations about starting our own media organization, we decided that we wanted to break with the model of parachute journalism, in which foreign journalists, typically North American or European, descend on countries in the Global South and report on events with a slanted perspective representing their own countries’ interests and with minimal if no input from journalists on the ground.

From the beginning, we sought to create a collaborative space where Cuban journalists and filmmakers would work with their foreign counterparts. We also wanted to reach a young audience in the United States that is not typically exposed to engaging and in-depth stories about Latin America and U.S. policy in the region. Our primary medium is video and we have crafted a dynamic and fast-paced style to reach this audience.

Many of our initial conversations revolved around the fact that we were aspiring to create something that was both ambitious and completely new. We struggled to find examples to follow of successful video-focused independent progressive media aimed at a young audience anywhere in the world, and much less in Cuba.

Our mission was exciting, but also daunting. How could we build an audience online with minimal resources? How should we balance our commitment to adhering to the highest journalistic standards and providing meaningful context with the need to reach an audience with a relatively short attention span? How would we make Belly of the Beast sustainable? We continue to ask these questions.

JT: Your documentary series looks at the implications of U.S. sanctions on Cuba during the pandemic and beyond. What was the process for reporting and deciding on themes for the three-part film? Why did you decide to break up the film as you did, and how did you find a balance between providing context and telling current stories?

Belly of the Beast: We initially planned on producing 10 parts, but due to the pandemic, we were forced to limit the series to three episodes. In the first part, we wanted to provide a broad look at the impact of the barrage of sanctions Trump imposed since he took office, as well as the political interests driving them. The first part was the most challenging in terms of balancing historical context with telling present-day stories, as the inaugural episode, we decided it was necessary to give basic background to an audience that might know little or nothing about Cuba and its history.

The second episode looks at the oil blockade of Cuba and the connection between U.S. policy towards Venezuela and Cuba. We prioritized this issue because the oil blockade has a tangible impact on the Cuban people and because the Trump administration’s policy towards Latin America is inextricably linked to its Cuba policy. We felt the third episode was particularly relevant given Covid and the devastating impact the U.S. campaign to discredit Cuba’s international medical program has had in Brazil, Bolivia and Ecuador, whose governments removed Cuban doctors in 2018 and 2019.

JT: "The War on Cuba" features Cubans from many walks of life — baseball players, shop owners, farmers, doctors. How was the film received by Cubans, while you were filming and as a finished product?

Belly of the Beast: Convincing Cubans to participate in the filming of the series was challenging because Cubans both inside and outside of the government are understandably wary of a media organization with foreign journalists aimed at a U.S. audience. The reaction to the finished product in Cuba has been overwhelmingly positive. People seemed to respond particularly well to the personal stories of Cubans whose lives have been affected by U.S. sanctions.

The embargo, or “blockade” as it’s known in Cuba, is a subject Cubans are familiar with because it is mentioned constantly in state-run media and by Cuban politicians.

As Liz Oliva Fernández, the journalist who presents The War on Cuba, states in the first episode: “Our government blames pretty much everything on the U.S. embargo…this gets so old.” By avoiding stale political discourse and focusing on the stories of real people, we realized that Cubans weren’t tired of hearing about the embargo, they were tired of the way they were hearing about it.

JT: Your collective in Cuba is aiming to fill a void in coverage of Cuba and U.S.-Cuba relations. What does it mean to be an independent media outlet in Cuba, and what is the current media landscape like? What are the biggest challenges you've encountered?

Belly of the Beast: One of our biggest challenges has been getting access to stories. Due to Cuba’s socialist system and centralized government, many institutions are state-run and thus getting access requires authorization from the government. This is not always so easy. The Cuban authorities are wary of providing unfettered access to foreign journalists, an understandable concern given that the U.S. government has been actively seeking regime change in Cuba for 60 years.

Another major challenge has been convincing supporters and allies in the United States why our work covering Cuba and U.S.-Cuba relations is so important. A year ago, in explaining why our “War on Cuba” series was relevant, we argued that Trump’s Cuba policy could have a decisive impact on the outcome of the presidential election in Florida. At the time, some people told us we were exaggerating Cuba’s significance. As it turns out, we were right.

We don’t expect Cuba’s relevance in U.S. politics and in the world will abate in the coming years. If anything, as Cuba continues to transform and its relations to the U.S. government improve under Biden, Belly of the Beast’s role will become even more crucial.

JT: Belly of the Beast has also produced a conversation series, Lessons From Cuba, and other short films. These cover topics like life of a printmaker, what Cuba looks like under quarantine, protests in solidarity with Black Lives Matter, musicians, mutual aid groups, and much more. Looking ahead, what issues and forms do you hope to pursue? What have you learned making "The War on Cuba" that will inform your work as a collective going forward?

Belly of the Beast: There are a myriad of issues we hope to take on in the coming year and beyond. We are working on a documentary series about Cuba’s remarkable success in containing Covid. We plan on continuing to do investigative work into U.S. government policy towards Cuba and its connection to Miami politics. Due to Covid, we’ve been unable to work much outside of Havana the last year and we hope to carry out more films and short videos outside of the capital.

Julia Thomas is a journalist currently working as a Digital Fellow at Democracy Now! In 2017-2018, she received a Thomas J. Watson Fellowship, during which she studied grassroots media and community-centered reporting alongside journalists in Ecuador, South Africa, Zimbabwe, India, and Nepal. Her work focuses on media, environmental justice, and social movements.