23 Years of Impunity for Perpetrators of Acteal Massacre

Survivors of the Acteal massacre have rejected the Mexican government’s offer of compensation. They demand that the perpetrators and masterminds be brought to justice. 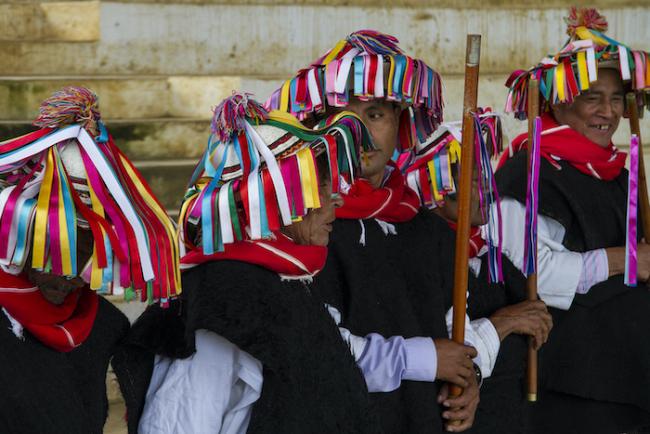 In a hut with almost no furniture, a group of Tzotzil people gather around a long wooden table and on the dirt floor, eating their breakfast: a bowl of beans, corn tortilla, habanero chili, and a big cup of coffee. The old wooden table and chairs are blackened with the smoke rising from a ground stove, where a pot of beans and a pot of coffee sit atop the fire.

Early in the morning of the 22nd of every month, young and old Tzotzil people pack this hut in Acteal, a small village in the highlands of Mexico’s southern state of Chiapas. Hailing from different communities of Chiapas’s Chenalhó municipality, they are all members of La Organización Sociedad Civil Las Abejas de Acteal, also known as Las Abejas. First, they eat their collective breakfast. Then they change out of their jeans and hoodies and into their traditional Tzotzil clothes to hold their monthly memorial of the 1997 Acteal massacre.

On December 22, 1997, over 100 armed men from the Máscara Roja paramilitary group entered Acteal, part of Las Abejas, and slaughtered 45 Tzotzil men, women and children, including four pregnant women. The paramilitaries sought to crush Indigenous communities suspected of supporting the Zapatista movement. Las Abejas, a pacifist Christian organization founded two years before the 1994 Zapatista uprising, opposed the Zapatistas’ use of armed struggle, but supported the movement’s goals of autonomy and Indigenous control over land.

Two decades later, not much has changed for the survivors and the family members of the victims of the massacre. Las Abejas, meaning The Bees, have held their monthly ceremony for the past 23 years, seeking justice. Meanwhile the perpetrators and masterminds of the massacre are still at large, enjoying unspoken impunity. In the aftermath of the massacre, 79 people were convicted and handed long-term prison sentences for their participation in the killings. However, the Mexican Supreme Court ordered their release individually and in groups in the following years.

“No matter what the government does, we will continue our fight for justice,” Simón Pedro Pérez López, a Tzotzil community leader and a member of the board of directors of Las Abejas, told me. “All we want is justice. We want the trial of those who ordered and carried out the massacre, and that the government recognize its full responsibility for the massacre.”

“No” to the Government’s Offer

On September 3, after 23 years of pressure from Mexican and international human rights activists, President Andrés Manuel López Obrador’s administration accepted that the federal government was responsible for failing to prevent the killing of unarmed civilians in Acteal. According to declassified U.S. Defense Intelligence Agency documents, the Mexican military tacitly backed paramilitary groups in Chiapas at the time of the massacre. However, instead of opening a new investigation to bring the perpetrators to justice, López Obrador’s government offered a friendly settlement to the families of the victims.

In an official apology ceremony, Alejandro Encinas, the Mexican deputy interior minister responsible for human rights, said to Tzotzil community leaders: “Accept our solidarity with your causes and our commitment to fulfill our inherent responsibilities...never again another Acteal.” 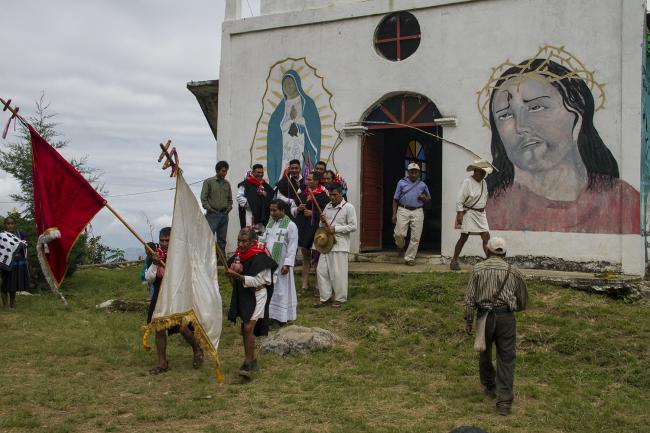 Tired of over two decades of injustice, a group of Tzotzil victims and survivors separated from Las Abejas and accepted the government’s offer of financial compensation. The government announced that it would close the case.

However, Las Abejas has firmly rejected the government’s solution.

“Fatigue has not defeated us, weariness has not bent us, the blows have not knocked us down, and hopelessness has not seized our hearts,” Las Abejas wrote in a statement rejecting the government’s offer.

“No promise of economic compensation is enough to make us settle for a public apology that does not get at the root of the truth, that allows all those responsible to go unpunished, and that therefore does not guarantee that another Acteal will not happen again in our territories. We have not settled for this crumb of justice,” the statement continued.

Pérez Lopéz believes that the López Obrador administration’s formal apology is not sincere and that by paying compensation, the government wants to silence demands for justice.

“Here in Chiapas, the government has done nothing to end the presence of the paramilitaries and still our lives are at risk,” Pérez Lopéz said. “We see with our own eyes that the sons of those who killed our families are now joining the ranks of new paramilitary groups, harassing Indigenous communities. The government is lying, they are still systematically killing the Indigenous people in Chiapas.”

Other members of Las Abejas suggest that the government’s friendly settlement is a part of a larger strategy to manipulate the survivors of the massacre in an attempt to close the case of the Acteal massacre at the Inter-American Commission on Human Rights. Las Abejas filed the case against the Mexican state in 2005. 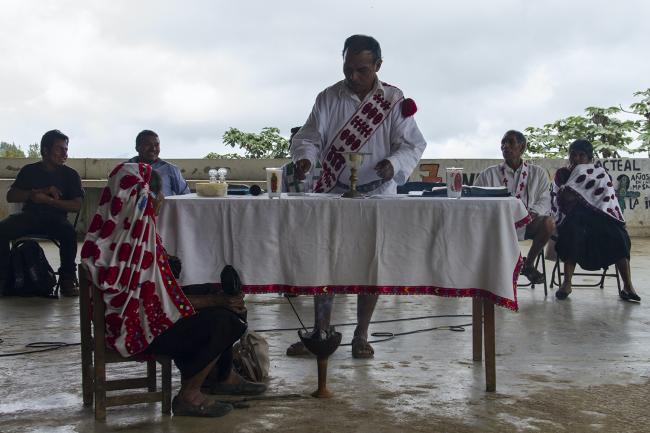 “Obviously the government wants to close the case, but we don’t accept that,” Guadalupe Vázquez Luna, a survivor of the massacre stressed. Vázquez Luna was 10 when the paramilitaries entered Acteal and killed her parents and five siblings. Now she is an Indigenous rights activist and an outspoken advocate of Las Abejas members who are seeking justice.

“The government’s apology will not give life to our parents, brothers, sisters and children whom we lost in the massacre. We don’t need an apology, we want to see those who were responsible for the massacre punished,” Vázquez Luna said.

Vázquez Luna and other members of Las Abejas demand prosecution of those who played a vital role in the massacre, including the politicians who supported and armed the paramilitaries during the 1990s. Former president Ernesto Zedillo is on the top of their list. He is known as one of the main supporters of the army’s Campaign Plan Chiapas 94 that paved the way for paramilitaries to do the government’s dirty work of suppressing Indigenous resistance.

“Ernesto Zedillo is still enjoying lots of benefits. He has a high position and receives millions of pesos, while we are waiting for justice. He should be in prison,” Vázquez Luna said. “What kind of justice is this, that you carry out a massacre and then you just apologize?”

Human rights lawyers have also condemned the government for offering compensation without holding the perpetrators accountable, suggesting that this provides greater impunity.

“Las Abejas are simply saying that they are not going to sell their dead,” Pedro Faro Navarro, director of Fray Bartolome Human Rights center of San Cristobal de las Casas (Frayba), told me.

“The government has offered a public apology, but has not yet accepted the state’s role in the massacre. This government is putting all the blame on previous administrations, instead of accepting the responsibility that the Mexican state had in this massacre,” he added. 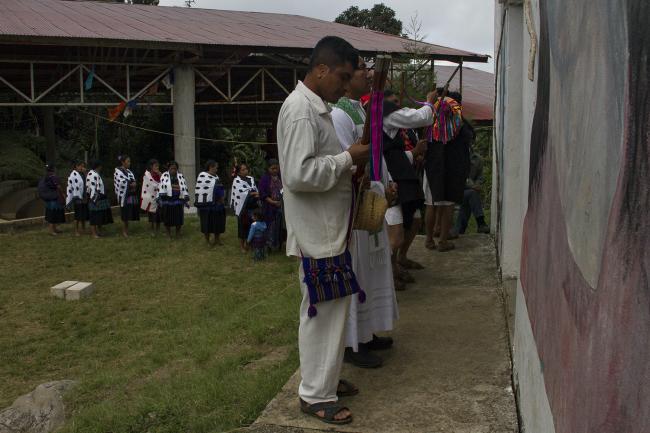 According to Frayba’s investigations, the army forces in bases close to Acteal could hear the sounds of shooting during the massacre, but they did nothing to stop the killing. The massacre lasted several hours and even the police forces stationed near Acteal did not intervene. This kind of complicity is a widely known counterinsurgency strategy deployed by the Mexican government.

“Yet the government has not said anything about its role in counterinsurgency and the presence of paramilitaries in the region, which is still going on. The paramilitaries in this region have had well-established military organizations and strategies, with diffused linkages with the state. It is diffused, but it [still] exists,” Faro explained.

Twenty-three years after the Acteal massacre, Indigenous residents of Aldam, a village 12 miles away from Acteal, are now under sporadic attack by paramilitary groups. This strategy mirrors the violence Acteal suffered before the massacre. Human rights activists in Chiapas suggest that accepting the friendly settlement for the Acteal massacre would encourage the paramilitaries to continue their attacks on Indigenous communities in Aldama with no fear of punishment. Activists such as Vázquez Luna are worried that if the impunity continues, a new generation could suffer the same fate.

“We were raised without our parents and we lived without having a family,” Vázquez Luna said. “This is exactly what we don’t want to happen to other Indigenous communities.”

Changiz M. Varzi is a journalist who writes about the impacts of wars and conflicts.