In a Washington State Prison, Latinos are Advocating for Mentorship and Education

A friendship between two Latinos incarcerated in Monroe, Washington led to a new community organization. 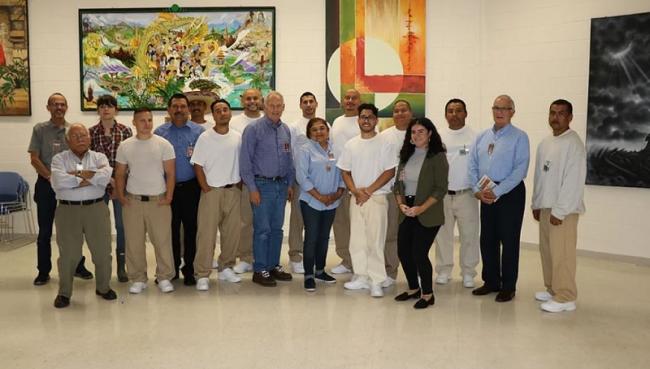 Forty minutes north-east of Seattle, a hill stands next to a high school in the middle of rural Monroe, Washington. Atop that hill, four prisons make up the Monroe Correctional Complex. Among them, the 100-year-old Washington State Reformatory (WSR) sits like a medieval castle surrounded by a brick wall. Gun-towers posted along the wall provide views into the recreation yard where residents segregate by race, affiliation, sexual orientation, and sometimes even conviction. White prisoners occupy a set of concrete bleachers along one side of the jogging-track, while Latinos line another about 50 feet away. Near the turnstile where they enter and exit, a cluster of tables harbors Black people and across the soccer-field, those who have been shunned by most of the population, find companionship together.

In an environment policed by violence, segregation is the means to minimize the risk of people from diverse backgrounds forced to live in close quarters clashing. In WSR, however, despite their differences, most of these groups share one commonality: access to educational opportunities while incarcerated. Between the volleyball net and handball court, a table is occupied by a Latinx group that, only two years ago, didn’t share in this privilege.Prisoners with immigration holds are considered, by the Department of Corrections, to be low priorities for education. They end up at the end of long waiting lists for classes.

A friendship forged at the “Paisa” table ultimately led to this inequity being bridged by those it directly affected through the Latino Development Organization (LDO), an organization whose mission is to promote equity by developing communities in which opportunities and resources such as education are available to all. The Spanish word “Paisa” is commonly used to refer to a Mexican countryman. However, to be considered a Paisa in a Washington state correctional facility also means the power structure considers you to be a security threat. In WSR, members of this group look to Francisco “Javier” Salazar-Sandoval for leadership.

“Throughout my sentence, there have been a lot of Latino kids who come to prison and followed in my steps, but for a long time I sold drugs and was involved in prison politics,” he says, referring to the underground social structure governed by prison gangs.

Born in 1979 in Colima, Mexico, Javier emigrated with his family to the United States when he was 10. At 18, he was found guilty of first-degree murder and sentenced to 37 years in prison. Within the first year, he became a leader amongst the Paisas, and left followers in every prison he passed through. His influence and reputation grew for the next 16 years until 2014, when he met a young man from Puebla, Mexico, named Rafael “Chino” Guzman, who challenged his ideas of what it meant to be a mentor.

Chino entered the system in 2011, at 20 years old, and chose a path similar to that of Javier.

“When I first came to prison,” Chino says, “I was trying to show that I was a gangster, and not a punk. I was just trying to show off, and I wished someone would have taught me to stop that because it’s not real.”

Javier recalls, “We became close friends real quickly, but all we were talking about was prison politics, and violence, and selling drugs, so I started thinking here’s another young Latino following in my steps, and I cared about the dude, so that’s when I decided I had to do something positive.”

The Hispanic Culture Group (HCG) had been operating inside the prison for more than 70 years. But attendance was so low that it may have altogether disappeared if not for the commitment of a pair of outside volunteers who had been involved for more than three decades. Javier began attending and encouraged Chino to follow. Before long, others joined, and the bi-weekly meetings grew in volume. Participants would share artwork, poetry, essays, and discuss issues which affected them, their families, and their communities. Sponsorship increased as well, and together Javier and Chino developed a system whereby attendees could donate their art for charitable causes, such as supporting a school and a children’s hospital. The meetings became highly anticipated times of fellowship, but seeing room for growth, rather than a finished product, the pair began to contemplate ways in which they could use the program to meet the deepest needs of their community, and possibly increase people’s chances of success upon release.

They formed a committee of incarcerated Latinos and began to brainstorm on a series of questions. What causes people to come to prison? What are some possible solutions? Are these solutions available in WSR? The problems, it seemed, revolved mostly around education, or lack thereof.  Though primary and higher education were very attainable in the prison, it wasn’t for immigrants. Moreover, the courses were all taught in English and of little to no value to people being deported.

“We needed to find a way to offer education to everyone,” Javier says, “but even the institution was against us in the beginning. Every time we asked for anything–even things we were allowed to have–they wouldn’t give them to us because they thought we were a gang. Even the other organization offering education saw us as competition. It wasn’t easy by any means.”

To make matters worse, in 2017, Chino was picked up by the Department of Corrections Internal Investigations Unit and sent to a different facility for suspicion of his involvement in a gang related assault. Javier was used to seeing friends come and go over the years, but losing Chino affected him in a way he hadn’t expected. Rather than channelling what he felt in a negative way, he vowed to finish what the two had started together and pushed harder than ever to make their common dream a reality. Recruiting help from HCG volunteers and assigning various tasks to his committee members, he was able to direct a movement that soon sprouted into the LDO.

Within the first year, the LDO was incorporated as a 501(c)(3) non-profit, with an outside board of directors, working in collaboration with Javier’s incarcerated advisory board, and various committees that accomplished tasks associated with general operations. In its second year, the LDO acquired an office in the city of Monroe, and had multiple ongoing programs, such as the cultural speech series, where members delivered speeches about topics of personal interest, the advanced translation workshop, with which they could become LDO certified translators, Alchemy Arts Studio, an arts program offered in collaboration with The New Alchemists, a bi-weekly lecture series, a series of courses in which professors and lecturers teach on various topics, from Science, to Math, to self-help, a Spanish class, and a successful mentorship program. All of these initiatives were multi-racial and gained popularity amongst the incarcerated population.

The Board of Directors also signed a contract with the Mexican government to offer the Plaza Comunitaria, a basic education program that provides a certificate similar to an American GED and holds merit in Mexico. The Plaza was about to be implemented before Covid lockdowns cancelled all programming in the prison. Though there are Plazas operating in other U.S. prisons, including 17 in Virginia, the LDO’s will be the first in a Washington prison, and the sixth in the state.

Chino returned to WSR in 2019 to not only reunite with his best friend, but to also discover that the seed that they had planted together had blossomed into a school. Today, he says, “The LDO is like a family in prison, where I can express myself and be better and feel accepted. You don’t have to pretend to be somebody else. In prison, everybody wants to show that they are tough, but with the LDO, you can relax and nobody’s gonna judge you. We can learn from each other, like when you hear the stories from people inside, and from outside sponsors. People on the streets believe we’re criminals, but when they come here, they see that we’re different and then they don’t feel that way toward us anymore.”

Though MCC’s yard remains, for the most part, segregated, the LDO has managed to inspire a unity among races around at least one common ground: education. It’s no longer out of the ordinary to see students, whether they be Latino, White, Black, or otherwise, stop at the Paisa table to shake hands or ask questions about classes they attend.

Since early this year, all programming in MCC has been suspended to reduce the threat of Covid-19 coming into the facility, but Javier has maintained regular communication with the Board of Directors, and says the seconds the gates reopen, it will be business as usual.

Michael J Moore is from Washington state. His books include Highway Twenty, which appeared on the Preliminary Ballot for the Bram Stoker Award, the bestselling post-apocalyptic novel, After the Change, which is used as curriculum at the University of Washington and the psychological thriller, Secret Harbor.  His work has received awards, has appeared on television, in various anthologies, journals, newspapers (including HuffPost) and magazines, and has been adapted for theater. Follow him at twitter.com/MichaelJMoore20 or  https://instagram.com/michaeljmoorewriting.