Religious Conservatism is Shaping the Civil Liberties Debate in Cuba

The growing Evangelical movement and the Catholic Church have opposed equal marriage and questioned the long-protected right to abortion. 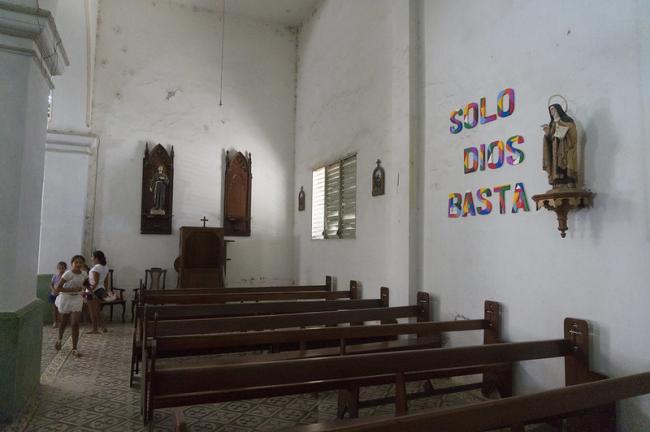 Cuba’s new Constitution, approved in February 2019, exposed the growth in the organizing capacity of religious institutions in a country that still maintains communism as its official political ideology. As Cubans discussed a proposal to legalize equal marriage within the context of the constitutional reform, a grassroots religious conservative movement revealed a new level of influence.

The emergence of evangelical churches since the 1990s allowed the growth of conservative ideas and groups within religious institutions, despite Cuba’s poor record on religious liberties. Today, evangelical churches exercise influence through new structures and build new narrative alternatives at a community level. Evangelicals, including young Cubans, will influence ongoing debates about civil liberties, including abortion and LGBT+ rights.

Amidst the debates leading up to the constitutional referendum, institutions like the Catholic Church opposed the possibility of legalizing equal marriage, engaging in an unprecedented public campaign and asking Catholics across the country to vote ‘no.’ While Catholicism has played a fundamental role in Cuban society and history, evangelicals are the backbone of a new social conservative movement.

Discussions of the constitutional referendum dominated the Caribbean island’s politics for months and introduced broader forms of debate and new issues to the national agenda. The new constitution opened, at least in theory, a wider framework for the free market and private property, limited presidential term limits, and extended protections against discrimination based on gender and sexual orientation.

The updated constitution was supposed to reinforce the image of a modernizing Cuba. After it was ratified, General Raul Castro, first secretary of the Communist Party said, “a new constitution was required, one that would not be limited to simply update the economic and social order, but one that would deepen the principals of our state, the extension of citizen rights and guarantees…thinking not only of the present, but above all the future of the nation.”

Catholic bishops issued a rare political statement criticizing many elements of the proposed constitution. Dionisio Garcia, a leading figure in Cuban Catholicism and the Archbishop of the country’s second largest city, Santiago de Cuba, referred to the debate as “ideological colonialism” while calling equal marriage an “unnecessary cultural change.”

“It’s incorrect to assume tradition-breaking changes of this nature as part of a revolution,” said Archbishop Dionisio Garcia.

Luis Velázquez, a young man who recently separated from the seminary of De La Salle Brothers Congregation in Havana, calls the Church’s position “brave,” because “the composition of the family needs to be protected, marriage under the eyes of God is between a man and woman, and kids need the stability that this structure provides.”

The Catholic Church in Cuba and people like Velázquez are outraged by the recent progress in LGBT+ rights and motivated to preserve “Cuban traditions” in the words of Velázquez.

In addition to Catholics, Evangelicals also weighed in on the contents of the new Constitution. Evangelical churches expanded in Cuba through U.S. missionaries after the collapse of the Soviet Union. Most churches in the island have a sister church in the U.S. that provides financial and spiritual guidance. Organizations such as Evangelical Christian Humanitarian Outreach for Cuba (EchoCuba), a U.S. nonprofit that has received approximately $2.3 million from the U.S. federal government between 2009 and 2017, actively supports the Cuban evangelical community. EchoCuba defines its mission as “to equip and strengthen the independent evangelical churches of Cuba through theological education and leadership training.”

Evangelical involvement in Cuban politics resembles other countries, including a focus on the maintenance of traditional Christian values in society, strong families, and religious-driven political positions. In countries like the United States, Brazil, and Uganda, evangelism has been effective in reorienting policy agendas, gaining support as bottom-up organizations in opposition to government policies. In contrast, in Cuba religious conservatism has a revolutionary appeal. Evangelicals question the orthodoxy of Marxist ideals during the last six decades and promote Christian morality as an alternative to militant secularism. They seek to re-litigate abortion access and oppose equal marriage.

As evangelicals gain political clout, Cuban youth–usually consumed by constant efforts to emigrate and escape the frustrating reality of their home country–have recently demonstrated a mobilizing capacity as well. The success of religious conservatives during the constitutional reform took place as younger generations are moving in a socially liberal direction and maintain strong support for progressive causes, such as civil liberties, human rights advocacy, anti-racist movements, and animal rights.

Those sentiments are expressed by Enmys Lopez, 32, a Havana-based entrepreneur, who says, “It’s time to legalize equal marriage. Love is love and that’s it. The church’s position has been very hypocritical, they keep asking us to invalidate human instinct and emotions.”

Even within the church, younger practitioners have advocated for broader acceptance of diverse sexual orientation. That’s the case of Oraimy Castillo, a Catholic gay man living in Placeta, Villa Clara Province. “I am Catholic and I’ve lived my whole life openly as a gay man,” says Oraimy. “The Church should accept people and embrace them in their diversity. The Church is essential in a person’s life. I’ve personally suffered discrimination, that needs to change because there isn’t truth without love.”

Both Castillo and Velázquez, devoted Catholics, think that gay couples should be protected. “The Church will never accept gay marriage,” says Velázquez. “However, the state should recognize or create a mechanism to acknowledge civil rights and protect the union of homosexuals. Same sex couples should have access to legal and civil rights.” The distinction between legal rights and the Church’s position on homosexuality has become more prominent, as Pope Francis recently indicated certain support for same-sex civil union.

The limitations on basic civil liberties in Cuba makes it challenging for younger generations to organize against the growth of religious conservatism. Since 1988, the National Center for Sexual Education (CENESX) has been the main institution advocating for LGBT rights. However, some independent LGBT+ activists who demand broader political rights have criticized CENESEX, led by Mariela Castro, the daughter of General Raul Castro. The controversy has deepened since May 2019, when the police arrested a number of gay rights activists at an unauthorized pride march in Havana and CENESEX sided with the official government narrative.

“We can achieve equal marriage, but I don’t think it is the key issue,” says Adriana Ricardo Diaz, a manager at a prominent local NGO in Havana. “During the constitutional referendum, if we had assumed that debate starting with the premise of expanding civil and political rights for everyone, that wouldn’t have become such a central issue.”

The rise of a religious conservative agenda also impacts abortion. The medical procedure has been accessible in Cuba since 1936, with the country even becoming a destination for U.S. women during the 1940s and 1950s. Since 1965, abortion is free, legal, and safe in every possible situation in Cuba. Those who oppose abortion say that in Cuba this practice is abused, and many women use it as birth control. “Many people abuse this resource [abortion] and that should be condemned,” says Luis Velázquez. “For us, a pro-life approach is essential to our faith doctrine. If you follow that logic, abortion becomes unacceptable.”

Adriana says that Cuba has regressed on reproductive health. “Access to abortion has been so normalized that we’re starting to forget other things. We’ve lost the opportunity to maintain a broader debate on sexual health as something that goes beyond the basics. From my perspective we need to do a better job educating people about sexual health, family planning or healthy relationship.”

Cuba’s aging population and low birth rates, which currently stands under the amount needed for population replacement, also factor into the abortion debate. “I know of cases where doctors and institutions try to convince women to keep the pregnancy. Although there is also an intention to care for women that assume abortions as birth control,” says Adriana.

While Cuba prepares to discuss equal marriage as part of a new family code in the coming months, at the heart of the debate are conflicting views of social justice and a struggle over the primacy of specific civil liberties. Some religious institutions are committed to the task of transforming faith into policy prescriptions. But Adriana says, “Cubans could miss a chance to ask for a broad expansion of freedoms instead engaging in misguided ideological divides.” Whatever the outcome, Evangelicals and conservative Catholics will maintain a level of influence previously only allowed for Government-run civil actors and reshape the nature of political discussions in the island for years to come.