Haiti’s president’s term has come to an end, but he refuses to step down. Solidarity is urgent. 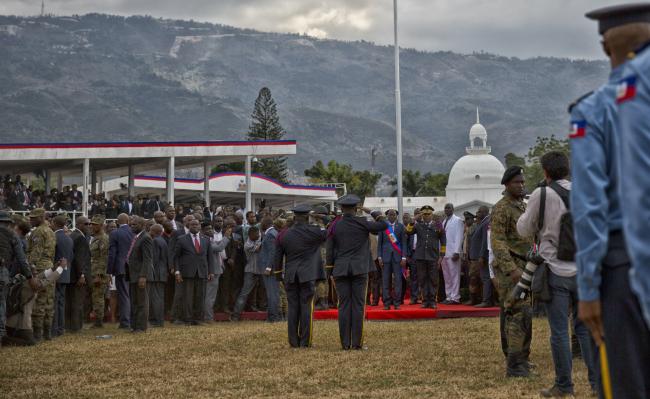 As per usual, news on Haiti in the United States remains limited, except for during periods of “crisis.” As if on cue, U.S. media began reporting on Haiti’s “constitutional crisis” this week.

Sunday, February 7 is the end of Haitian President Jovenel Moïse’s term, according to the constitution. He refuses to step down. This week, the opposition called for a two-day general strike, uniting around a transition with the head of Haiti’s Supreme Court stepping in.

Most reporting failed to note the international role, and particularly that of the United States, in creating this “crisis.” And nearly all focused only on one segment of the opposition: leaders of Haiti’s political parties.

Predictably, foreign media led their stories with violence. True, the security situation is deteriorating: Nou Pap Dòmi denounced 944 killings  in the first eight months of 2020. But leaving the discussion at “gang violence” whitewashes its political dimensions: on January 22, leaders of the so-called “G9” (the group of 9), a federation of gangs led by former police officer Jimmy Chérisier, alias “Barbecue,” held a march in defense of the Haitian president. National Network for the Defence of Human Rights (RNDDH) reported in August 2020 that the government federated the gangs in the first place.

This “gangsterization” occurred without parliamentary sanction. On January 13, 2020—a day after the 10th anniversary of Haiti’s devastating earthquake—parliament’s terms ended, leaving President Moïse to rule by decree. One such decree came in November as the wave of kidnapping increased: the president outlawed some forms of protest, calling it “terrorism.”

Readers in the United States should not need to be reminded of white supremacists’ violent attack on Congress and the U.S. Constitution on January 6 that killed at least six people, on the heels of coup attempts in Michigan and other vigilante attacks. In the United States, police killed 226 Black people last year. The irony of U.S. officials opining on violence, democracy, or the rule of law is apparently invisible to some readers.

In addition to parallels of state violence against Black people in the United States and Haiti, missing from most stories is context about the specific roles played by previous U.S. administrations—from both parties—in fomenting and increasing that violence.

Haiti’s ruling Tèt Kale party got its start in 2011, when bawdy carnival singer Michel Martelly was muscled into the election’s second round by Secretary of State Hillary Clinton and the United Nations Special Envoy and co-chair of the Interim Haiti Reconstruction Commission (IHRC) Bill Clinton.

This support from the Clintons, the United States, and the so-called Core Group (including France, Canada, Brazil, the European Union, and the Organization of American States), never wavered, despite the increasingly clear slide toward authoritarianism. In 2012, Martelly installed allied mayors in all but a handful of towns. Then parliament’s terms expired in 2015, the five-year anniversary of the earthquake, with promises of holding elections never materializing. The vote that did finally lead to the election of Martelly’s hand-picked successor, Jovenel Moïse, was fraudulent. Yet the United States and the Core Group continued to play along—and offer financial support—until finally the electoral commission formally called for its annulment. Because of international pressure, the final round was held weeks after Hurricane Matthew ravaged large segments of the country. It was the lowest voter turnout in the country’s history.

Why would so-called “democratic” countries continue to support the Tèt Kale state? What was in it for Empire?

Having to thank his friends in high places, Martelly’s reconstruction effort focused on providing opportunities for foreign capitalist interests to invest in tourism, agribusiness, sweatshops, and mining. Not surprisingly, donors to the Clinton Global Initiative made out like (legal) bandits.* Ironically, $4 billion available to help fund this disaster capitalism was from Venezuela’s PetroCaribe program, which offered low-cost oil and low-interest loans. With the Haitian state safely under the Clintons’ watch, the transformative potential of this alternative to neoliberal globalization and example of South-South solidarity was squandered. Cue foreign mainstream media’s focus solely on “corruption” of this complex movement demanding #KòtKòbPetwoKaribe? Where are the PetroCaribe funds? 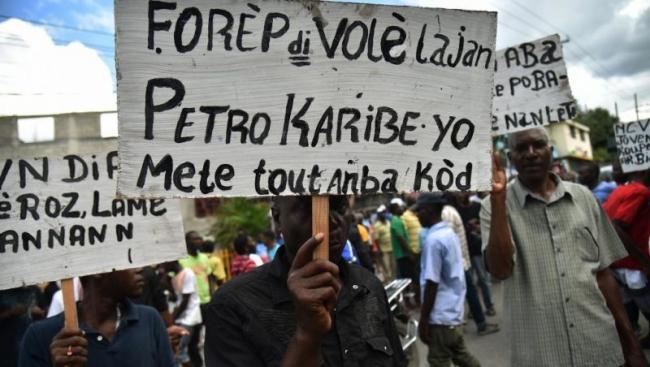 This popular movement was an extension of the uprising against International Monetary Fund-imposed austerity. On July 6, 2018, during the World Cup, the Haitian government announced a price hike for petroleum products. Right after Brazil lost the match, the people took to the streets all across the country and shut it down. In Kreyòl, this was the first peyi lòk—a lockdown or general strike.

It was the first time in my 20 years working in Haiti that a mobilization brought together people from every socioeconomic status, at one point reaching two million people across the country (out of a population of 11 million). Faced with this popular swell of dissent, the government increasingly turned to violence, including a massacre in Lasalin, a low-income neighborhood near the port and a stronghold for the party of former president Jean-Bertrand Aristide.

Thinking back to my time in Haiti during the 2003-2004 coup against Aristide and comparing the people on the streets then and now, it seemed likely that Moïse would be forced out by November 2018. Certainly he would be gone by February 7, 2019—two years ago.

So why is he still in office?

Like his predecessor “Sweet Micky,” Martelly’s stage name, the “Banana Man” as Moïse was known during the campaign, had friends in high places. President Donald Trump met with Moïse and other right-of-center hemispheric heads of state at his Mar-a-Lago resort in March 2019. Haiti was crucial in the U.S.-led effort in the OAS to not recognize Nicolás Maduro as the legitimate president of Venezuela. Despite the billions in aid Haiti received from Venezuela through PetroCaribe, and bilateral cooperation that began in 1815 when Haitian president Alexandre Pétion provided crucial arms and support for Simón Bolívar, President Moïse sided with Trump. In 1962, Haitian president “Papa Doc” Duvalier—whom history and solidarity movements judged as a dictator—did the same thing to Cuba, and the United States generously rewarded him. 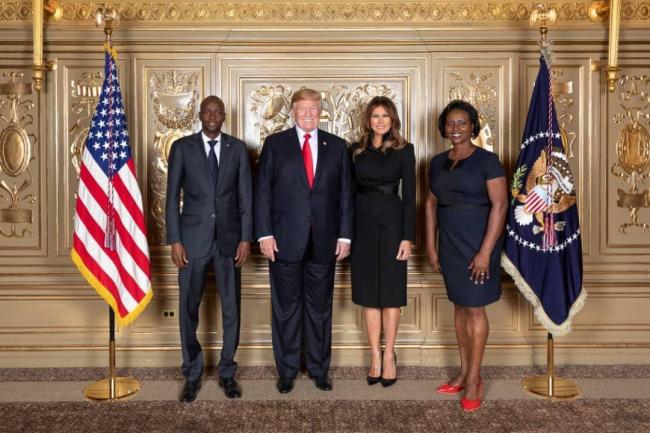 Given the new White House occupant, and campaign promises to the key battleground state of Florida, one might think that President Joe Biden would reverse course vis-à-vis Haiti. Why, then, would Immigration and Customs Enforcement continue to deport 1,800 people, some not even born in Haiti, sending not one but two deportation flights on February 4 alone?

The voices within Haiti that foreign corporate media amplify are those of political parties. The Kolektif Anakawona outlined at least two other much larger opposition segments connected to grassroots organizing. On November 29, the popular organization coalition Konbit issued a five-language call for solidarity. The workers’ movement Batay Ouvriye outlined popular demands for whomever takes office. A group of professionals, Fowòm Politik Sosyopwofesyonèl Pwogresis Ayisyen (FPSPA), denounced the United Nations for rushing elections and its support for what FPSPA qualifies as a dictatorship. David Oxygène, with the popular organization MOLEGHAF, critiqued the political party consensus as olye yon lit de klas, se yon lit de plas—rather than a class struggle, it’s a struggle for position (power). Both he and activist Nixon Boumba underscore that the opposition plan is a short-term solution, when Haitian movements are asking for long-term solutions and changing the system. Activist-journalist Jean Claudy Aristil and others point out the fundamental hypocrisy and limits of “Western democracy.” Moneyed interests, including imperial powers, who dominate the political process in Haiti are by no accident part of the same transnational capitalist class that has rigged the system in the United States—the model for other political systems in the Americas.

These Haitian activists and scholars are not asking for U.S. intervention in support of what Oxygène called 2 zèl yon menm malfini—two wings of the same vulture.

They are asking for us to dismantle imperial interference and to join them in transforming our institutions so that people-to-people solidarity and a democratic global economy can then be possible.

The Spring 2021 issue of the NACLA Report, edited by Mamyrah Dougé-Prosper and Mark Schuller, takes a deep dive into Haiti. Subscribe now!

Mark Schuller is Professor of anthropology and nonprofit and NGO studies at Northern Illinois University and affiliate at the Faculté d’Ethnologie, l’Université d’État d’Haïti. Schuller’s research has been published in over forty scholarly publications. Schuller is the author or co-editor of eight books—including Humanity’s Last Stand: Confronting Global Catastrophe—and co-director/co-producer of the documentary Poto Mitan: Haitian Women, Pillars of the Global Economy. Recipient of the Margaret Mead Award, Schuller is President of the Haitian Studies Association and active in several solidarity efforts.