Indigenous environmentalist Yaku Pérez and conservative Guillermo Lasso are locked in a vote re-count to determine who will face Andrés Arauz in the secound round in April, posing a challenge to correísmo. 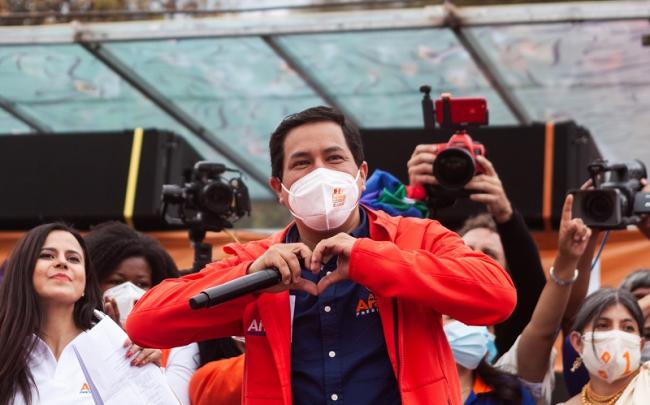 Trying to understand Ecuadorian politics is like trying to tie your shoelaces while walking—or so the saying goes. Sunday’s presidential election is no exception. On February 7, Ecuadorians went to the polls to choose their next president from among 16 contenders. While three candidates rose to prominence in the run up to the election, none scored high enough in the polls to secure an outright victory, sending the country to a runoff election scheduled for April 11.

The leftist candidate Andrés Arauz of the Union for Hope (Unión por la Esperanza—UNES) party took the top spot with 32.7 percent of the vote. Arauz, a 36-year-old economist from Quito, would become Ecuador’s youngest president if successful in the runoff. He served as director of Ecuador’s Central Bank and then Minister of Knowledge and Human Talent under the administration of former president Rafael Correa (2007-2017) and is the heir apparent to Correa’s “citizens’ revolution.”

The most serious controversy of the 2021 presidential election so far has been in determining the second-place finisher. Following Sunday’s election, Ecuador’s other leftist candidate, Indigenous environmental activist Yaku Pérez of the Pachakutik Movement for Plurinational Unity (Movimiento de Unidad Plurinacional Pachakutik—MUPP) was in a virtual tie with the social conservative and pro-business candidate on the political right, Guillermo Lasso of the Creating Opportunities Movement (Movimiento Creo, Creando Oportunidades—CREO). Pérez’s slight initial edge in the polls was slowly whittled away and then reversed as counting continued throughout the week. As of Saturday morning, Lasso was ahead with 19.74 percent of the vote compared to Pérez’s agonizing 19.38 percent, with 99.71 percent of ballots counted.

On Friday, the two candidates agreed to a re-count in 17 of Ecuador's 24 provinces. If Pérez somehow secures a spot in the runoff, Ecuador would see a showdown between two Lefts, leading some analysts to worry about where that would leave the country’s right-wing forces. A second round between Arauz and Lasso would give the young economist a better shot at victory, as Sunday’s outcome shows how little support there is for conservative policies in the country.

Like Correa, Arauz espouses a top-down leftist and nationalist ideology that could help to rebuild the leftist block in South America that had eroded under the shift to the political right in Latin America. Arauz’s preferred running mate was Correa himself, but his addition to the ticket was rejected by Ecuador’s National Electoral Council (CNE) over the former president’s conviction on corruption charges- Arauz characterizes this as political persecution. If successful in the second-round, Arauz will appoint Correa as his main advisor—with some observers suggesting that if Arauz wins, it will really be Correa who is governing Ecuador. 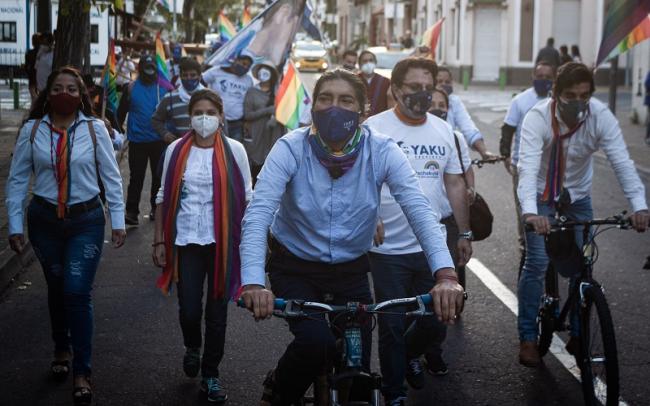 The major dividing line between the three presidential candidates is their stance on correísmo—the leftist, populist movement led by former president Correa. While the pro-market Lasso rejects Correa’s statist policies, Pérez positions himself as fighting both correísmo and the political right. Yaku, as he is affectionately known (which means “water” in Quichua), became a popular political figure during Correa’s presidency by protesting controversial mining projects, particularly in his hometown of Cuenca in the southern highlands. Former president of Ecuador’s main highland Indigenous organization ECUARUNARI, Pérez was elected prefect of Azuay province in 2019 before deciding to run for president.

Pérez’s national profile grew as he helped to lead the October 2019 protests of austerity measures imposed by president Lenín Moreno (2017-2021) that nearly brought down the government. Moreno, whose popularity dipped into the single digits in the face of the country’s multiple crises brought on by the crash in oil prices and the ravages of the Covid-19 pandemic, chose not to seek re-election in 2021.

The roots of distrust between Correa and Ecuador’s Indigenous movement can be traced back to the former president’s appropriation of the movement’s political agenda. Ecuador’s Indigenous movement was once widely regarded as Latin America’s strongest social movement. Under the direction of the Confederation of Indigenous Nationalities of Ecuador (CONAIE), the movement managed to disrupt the implementation of neoliberal economic reforms throughout the 1990s. Indigenous activism in the country paved the way for an alternative economic and political model, though under the leadership of left-leaning, populist Rafael Correa.

Ecuador’s “left turn” government introduced several important policy measures to address Indigenous demands in the country, albeit without meaningfully including Indigenous peoples in the policy deliberations. Correa’s “citizens’ revolution” institutionalized the Indigenous movement’s political project while marginalizing the movement itself. Perhaps most contentious has been Correa’s vision of a socially responsible mining sector as the backbone of the country’s development which drew protests from Indigenous groups and leaders, including Yaku Pérez, whose territories stood in Correa’s way.

Although Pachakutik may not secure a spot in the runoff election, the party outperformed the expectations of most political observers. Based on results from Ecuador’s CNE, Pachakutik has become the second largest political bloc in the National Assembly (18 percent) after UNES (31 percent), with CREO a distant third (10 percent), guaranteeing that the party will continue to influence the country’s political agenda.

According to Political Science Professor Pablo Andrade of Ecuador’s Simón Bolívar Andean University (UASB), “Yaku Pérez has a discourse that touches on many new issues, especially for urban allies such as ecologists, women’s rights and LGBTQ+ rights activists.” The decision to participate in elections was not an easy one for the Indigenous movement. Social movements are supposed to break the rules of the game, not play by them. By forming their own electoral vehicle, Ecuador’s Indigenous movement has successfully combined disruptive tactics with efforts to elect candidates. The divide between the top-down left of Arauz and the social movement left of Pérez is so extensive that it cannot be assumed that the vote for Pachakutik in the first round would translate into a vote for correísmo in the second round. Mostly likely we will see the period of protest activity that began under Correa continue under Arauz, if he succeeds in the runoff election.

Ecuador is a country of firsts. It was the first country in Latin America to grant women the right to vote (1929). It was the first country to transition from authoritarianism to democracy (1979) as part of the region’s third wave of democratization. It was also the first country to experience a national Indigenous uprising (1990) in the contemporary era as well as to constitutionally recognize (2008) the plurinational character of the state. It is only a matter of time before Ecuador attains its first Indigenous president. The magic of Ecuador is that anything is possible. In the words of Professor Andrade, “the future is open.”

*Information for this article has been drawn from my book The New Politics of Protest: Indigenous Mobilization in Latin America’s Neoliberal Era (University of Arizona Press, 2012).

Roberta Rice is Associate Professor of Political Science at the University of Calgary, Canada. She is the author of numerous articles as well as an award-nominated book on Indigenous politics in Latin America.