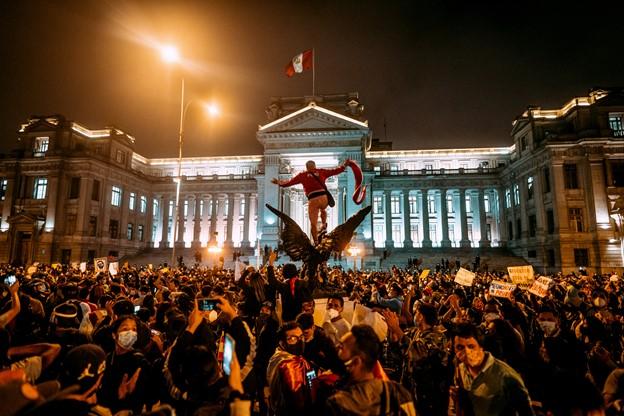 A year of escalating tensions between the legislative and executive branches of the Peruvian government came to a breaking point on November 9, when President Martín Vizcarra was impeached on grounds of “moral incapacity.” For the second time in two months,a coalition of lawmakers threatened by the anti-corruption investigations and policy reform that Vizcarra spearheaded attempted to remove him from office. Moments after the vote was called, Peruvians took to the streets to denounce what they viewed as an anti-democratic power grab.

Among them was a young Peruvian feminist named Diana Levi, who joined the protesters in Lima’s historic city center to voice her discontent with the Congress’s illegitimate move. Diana is part of the Brigada Verde (Green Brigade), a newly organized group of young activists who provide medical assistance to victims of police repression during protests.

Like Brigada Verde, hundreds of small, decentralized organizations formed through social media to coordinate the week-long mobilizations that ousted the interim president, Manuel Merino, his cabinet, and the Congress’ board of directors on November 15. On Tuesday, Francisco Sagasti was sworn in as president, replacing Merino. In a country characterized by fragmented and uncoordinated mobilization, the scale of the movement against Vizcarra’s impeachment was unprecedented. Why did discontent boil over now, and what is the future for this mobilization?

The day after the impeachment, people flooded Instagram, Twitter, and TikTok with the hashtag #MerinoNoMeRepresenta (#MerinoDoesNotRepresentMe) to shareinformation about protests around the country. In Lima, protesters met at 9 AM, during Merino’s swearing in ceremony, to express their disagreement with the impeachment.

Hundreds of Peruvians gathered with posters, flags, and musical instruments, and marched peacefully around the city center. However, once protesters approached Congress, police reacted using tear gas and batons. The first images of police repression inundated social media later that day and motivated massive participation in demonstrations across the country. Diana and a group of friends decided to create Brigada Verde shortly after.

In a network of feminists who share job opportunities online, Diana discussed the impeachment process and the unfairness of the outcome. For her, protesting was important to denounce Congress’s constant attack on democracy through populist policies, an endless battle with the president over the economic response to Covid-19, and corruption scandals that involved lawmakers and party leaders.

Members from her network invited Diana to join another WhatsApp group called “Women to Congress,” where activists were coordinating mobilizations around the country in response to the impeachment. In that group, Diana and a group of friends decided to contribute to the protests by deactivating tear gas cannisters and creating a rest space for protesters wounded by the police. The Brigada organized a campaign to gather supplies and monetary donations, all of which were collected through social media.

Small, decentralized online networks have been the main unit of organization throughout the popular mobilization. Rosa Arévalo, a 30-year-old political scientist, joined the protests after receiving five different WhatsApp groups requests, including one from the Brigada.

“Social media was key in calling for people’s action,” she says. “In each chat group, there was self-regulation and people in charge of weeding out infiltrators.” Within the major groups, sub-groups quickly formed based on location. In Cusco, during the national march on November 12, more than 18,000 people gathered in the Plaza de Armas and organized dance parades to peacefully protest the impeachment.

While protests typically gather in Lima’s city center, the decentralized nature of the impeachment protests called for demonstrators to mobilize in areas close to home. This is how César Urquizo, 29, who had never joined a protest before, decided to participate. He says he felt a civic duty.

“Since Merino took power, I noticed a lot of people were protesting and I felt almost an obligation to be there with them,” he says. “There wasn’t an aggressive or targeted campaign calling for us to protest, but it was the indignation what took us out of our house.”

However, he did not want to risk exposing his family to Covid-19, so he joined the decentralized protests within walking distance of his house. César found information on Twitter and participated in both the November 12 and November 14 national marches. “It was very peaceful,” he says of the #14N demonstration. “And the environment was very welcoming, people came outside their windows to cheer the protesters, clanking their pots and singing.”

The repertoire of protest tactics varied based on participants’ abilities and availability. For those in the at-risk group for Covid-19 or who, like César, were concerned about family members, neighborhoods organized cacerolazos and canvasing campaigns. Other protesters mobilized their non-political contacts.

Tania Ramírez, 31, used WhatsApp to organize a dance parade with an orchestra on Sunday, November 15, in honor of the two students who died the previous day. For the younger generations, social media influencers used TikTok and Instagram to explain the political crisis. Josi Martinez (@josimartinezzz), a teenage TikTok influencer with over 17 million followers, encouraged viewers to participate in the protests. 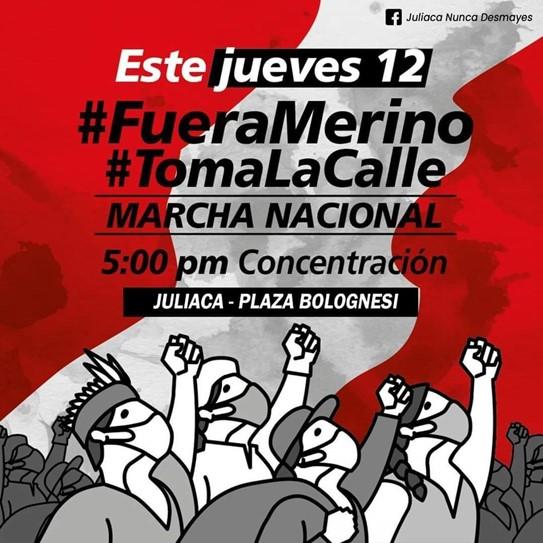 The November 14 march has been characterized as the largest in Peruvian history, even bigger than the 2016 #NiUnaMenos mobilization. It remained peaceful in the regions outside of Lima, where police accompanied protesters without incidents. In Lima, however, police repression intensified beginning around 8 PM at the Plaza San Martin.

Protesters have denounced that the police used helicopters to throw tear gas at the crowds, fired rubber bullets, and made arbitrary arrests. Two students were killed during this march, Jordan Inti Sotelo Camargo, 24, and Jack Bryan Pintado Sánchez, 22. In addition, 22 protesters remained hospitalized as of November 17 and a total of 207 required medical attention. There were reports of over 40 missing persons, and two remained missing as of the morning of November 18.

In addition to the mounting pressure from human rights organizations, the Organization of American States, and the international press, the November 14 march weakened the interim government of Manuel Merino. On Sunday, November 15 at noon, he finally quit. His resignation, however, does not mean the mobilizations will end.

The week-long protests in Peru show new dynamics of social mobilization fostered during the Covid-19 pandemic. Even though Peru imposed one of the strictest lockdowns in the region, these restrictions have not silenced protests and social conflicts. Instead, the pandemic has changed mobilization by introducing new grievances. According to a recent study by researchers Omar Coronel and Anette Malca, 89 percent of Peru’s collective protest actions between March and June 2020 were linked to the pandemic, particularly demands for better infrastructure and working conditions for healthcare workers. The pandemic has also heightened social and economic inequality, increasing the salience of economic grievances. In May, a survey by IPSOS showed that the main concern during lockdown for 65 percent of respondents was the economic impact. 41 percent of respondents reported they had lost their jobs due to the pandemic.

The pandemic has also promoted the use of social media for political engagement. Anecdotally, social media use has increased, expanding users’ connectivity. Given the lockdown restrictions and fear of contagion, Peruvians are travelling less within and outside their regions. Together, these dynamics validated the use of decentralized mechanisms for social organization, which proved to be successful.

The November 2020 protests in Peru have shown the people’s capacity to coordinate and organize large-scale and sustained mobilizations throughout the country. Peruvians have mobilized without a centralized leadership. On the contrary, they have capitalized their pre-existing networks and social media to manifest their political engagement. The extreme police repression has not been a deterrent but has instead inspired a new set of demands for police reform and oversight, and for a new Constitution. These calls are now entering the political debate leading upto the April 2021 presidential election.

The protests also motivated a series of initiatives to scrutinize politicians’ corruption claims and provide rigorous information on candidates ahead of the election. Now, it is up to politicians to stop underestimating the electorate and fulfill demands for better representation.

Verónica Hurtado Lozada is a Ph.D. Candidate in Political Science at the University of British Columbia. Her research focuses on political economy of development and political behavior, with a regional specialization in Latin America. Her dissertation studies the formation and scope of populist mobilizations in two Andean countries: Peru and Bolivia.