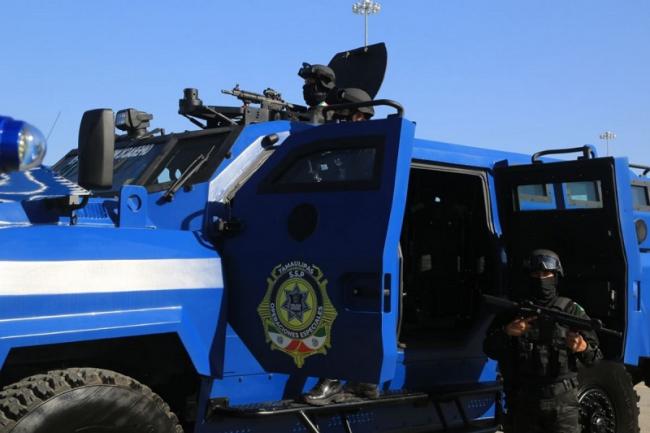 On the third day of the Biden administration, January 22, 16 Guatemalan migrants and three Mexicans were massacred by police gunfire and their bodies burned on a lonely road in Mexico’s Tamaulipas state, near the Texas border. The murdered migrants were as young as 15 years old. The oldest, Edgar López, 49, had been deported a year and a half before after an ICE raid in Carthage, Mississippi, where he had lived, worked, and raised a family for 22 years.

The bodies of the Guatemalan migrants were finally returned on March 12 to their families in Comitancillo, a poor, Indigenous Mam community in Guatemala’s mountainous San Marcos Department. The Guatemalan government declared three days of mourning and pledged to pursue punishment of those responsible.

The massacre is the latest of thousands of attacks by both state and non-state groups in Mexico, who have forcibly disappeared an estimated 35,000 migrants. The Camargo tragedy took the largest number of victims of any single state atrocity in Mexico in more than five years, when federal police killed more than 20 alleged members of a criminal organization in Tanhuato, Michoacán in May 2015. Outside of confrontations with criminal organizations, the killing of the Guatemalan migrants in Camargo is the worst atrocity since the forced disappearance of 43 student teachers from the Ayotzinapa Normal School in Guerrero in September 2014.

Initially, the Camargo events received little international attention. That began to change after Mexican authorities arrested 12 police officers on February 2 on charges of homicide, abuse of authority, and making false statements. Though the pickup truck in which the bodies were found had 113 bullet holes, there were no spent bullet shells around the vehicle. Authorities believe that police removed bullet shells from the scene because they had used their service firearms in the massacre.

Eight of the officers implicated in the Camargo massacre were part of a Tamaulipas state police special forces unit, the Grupo de Operaciones Especiales (Special Operations Group, GOPES), armed and trained by the United States. According to the State Department, its counter-narcotics bureau has trained approximately 27,000 Mexican police officers since 2016, and supports Tamaulipas police with training facilities, first responder training, and weapons simulators.

The United States has exported weapons for use by police in Tamaulipas for at least six years. According to documents from the Mexican army, more than 1,000 U.S.-produced Sig Sauer rifles were sold for use by police in the state of Tamaulipas between 2014 and May 2019. The Camargo massacre was not the first atrocity committed by the GOPES, but the flow of U.S. guns to the unit continued unabated. Tamaulipas state government has posted photos of GOPES officers in which they are brandishing Sig Sauer assault rifles.

In September 2019, GOPES agents–then part of a unit called the Centro de Análisis, Información y Estudios de Tamaulipas (Analysis, Information, and Studies Center)–extrajudicially killed eight people in Valles de Anahuác, a neighborhood in Nuevo Laredo just over the border from Texas. The United Nations initiated an investigation, and two police agents were charged but have not been tried for the killings. Yet shortly after those events, in October and December 2019, Tamaulipas state police received 600 more Sig Sauer rifles and 250 Sig Sauer handguns, according to receipts we obtained from the Mexican army, known as the Mexico Defense Secretariat (SEDENA). Some Sig Sauer rifles ended up with the special forces unit that committed the Camargo massacre.

In February 2020, Tamaulipas state police killed 23-year-old Juan Daniel Ortiz Martínez, shooting him with at least 50 bullets. A video of the episode captures the sound of dozens of high-caliber gunshots, being fired at a stationary pickup truck. The victim’s mother reported that she was on the phone with her son and could hear him pleading for his life.

Until last March, all foreign importers of U.S. weapons had to provide an end user certificate to the exporting company, which would submit it to the U.S. State Department. In Mexico, SEDENA is the sole authorized importer of firearms, and also the only legal seller of firearms, most of which are sold to state, local and federal police forces.

End user certificates for firearms exported by U.S. companies and sold to police in Tamaulipas, which we obtained through a public records request to SEDENA, falsely show the end user as the Mexican military. In fact, every single end user certificate for more than 147,000 firearms exported from the United States to Mexico for use by police from 2008 through 2019 declares the army as the end user.

Yet more than 8,200 receipts, also obtained from SEDENA, show that the Army sold U.S.-exported weapons to police, including state and local police in Tamaulipas, Guerrero, Chihuahua, and other states with extensive documented records of state violence and corruption. In late 2014, Mexican media reports implicated Guerrero state police in the forced disappearance of the 43 Ayotzinapa students. Yet, on February 3, 2015, SEDENA notified Colt’s Manufacturing in Hartford, Connecticut that Colt carbines would go to state police in Guerrero and several other states, according to a document we obtained. On the exact same day, SEDENA submitted a certificate for 387 imported Colt carbines, naming itself as the end user.

A Mexican army officer who handles weapons imports recognized the end use declarations as a problem. “We are the end users. From my perspective it’s a misnomer, because the end user should be who owns the weapon, but normally the importer is listed as the end user,” said the officer, who was not authorized to speak for attribution about the practice. The purpose of the certificate, officers said, is to assure exporters that Mexico won’t transfer the weapons to another country. But this arrangement shields criminal users in Mexico.

On March 12, eight U.S. senators wrote to Secretary of State Anthony Blinken, noting the evidence that “U.S. firearms that were exported to Mexico were subsequently provided to state police forces shortly after such forces had been publicly implicated in the commission of atrocities,” the senators asked Blinken a series of pointed questions about the State Department’s oversight of Colt and Sig Sauer weapons exports to Mexico for which it issued licenses, including whether they were used by GOPES agents in the Camargo massacre.

Last March, the Trump administration loosened rules for firearms exports by transferring their oversight from the State Department to the Commerce Department. Since then, U.S. exports of semi-automatic pistols–especially those produced by Sig Sauer–have exploded, more than doubling compared to the same period in 2019, according to U.S. Census Bureau trade data. This included the export of more than 50,000 Sig Sauer pistols to Mexico’s National Guard last April, making Mexico the second largest buyer of U.S. handguns in the world in 2020. Yet sales of U.S. assault rifles and handguns to police in Tamaulipas, Guerrero, Veracruz, and other states with extensively documented abuses pre-dated Trump’s export rule change. Biden’s campaign platform included returning weapons export oversight to the State Department, but the administration and Congress must do a lot more to stop the flow of weapons to criminal actors.

The same day as Tamaulipas police were charged for the Camargo massacre, President Biden issued an executive order to address the “root causes” of migration from Central America to the United States. The order pledged action to prevent “violence, extortion, and other crimes perpetrated by ...criminal organizations.” More than two thirds of migrants who cross Mexico report being victims of violence in Mexico, and 70 percent of illicit firearms recovered in Mexico are produced or sold in the United States unfettered gun market. Yet Biden’s order did not even mention the flow of weaponry to Mexico from retail gun shops just over the river from Camargo, much less the federally-licensed exportation of rifles and pistols from U.S. companies to Mexican and Central American police involved in atrocities and criminal collusion.

President Biden has suspended arms sales to Saudi Arabia and the United Arab Emirates because of their use against civilians in the war in Yemen, and announced a review of other arms deals. Such a review should be extended to Mexico, where exported firearms are cutting down the possibilities of migrants and Mexicans alike not just to find safe haven, but to live.

Preventing the use of U.S. weapons for atrocities in Mexico requires the United States to establish effective mechanisms for monitoring and controlling where weapons exported to Mexico end up. Until then, U.S. gun exports to Mexico are likely to arm those who commit human rights atrocities or do business with criminal organizations. The Biden administration should suspend them as part of changes to both Washington’s disastrous security strategy in Mexico and Central America and the failed end user system for U.S. weapons exports.

John Lindsay-Poland is coordinator of Stop US Arms to Mexico, a project of the human rights organization Global Exchange in San Francisco.