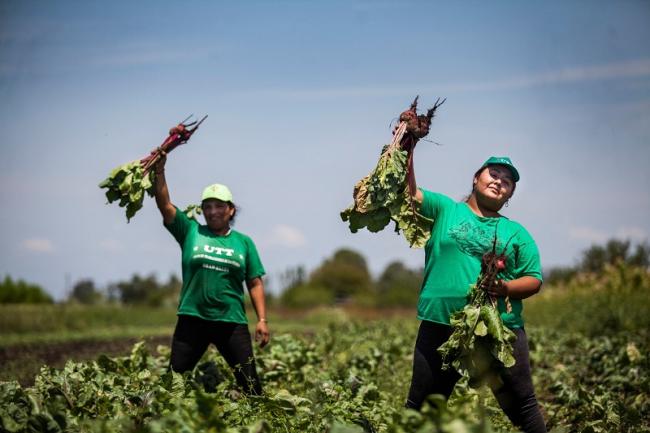 When Josué Trujillo left Tarija, Bolivia, and came to Argentina, the tropical land that he saw through the bus window haunted him. It was Orán, an exuberant town on the Bolivian-Argentinian northeast border. Many years later, he finally stepped a foot on those lands. No longer as a migrant child in search of a better future, but as a leader for the Northern district of the Union of Land Workers (UTT), an organization working for a sea change in food production in Argentina.

Argentina is one of the main food producers in South America. UTT is organizing small-scale farmers and peasants to produce fruits and vegetables without pesticides and within a fair-trade framework. The union formed 10 years ago, and now sells produce at more than 200 locations in cities around the country.

Trujillo, now 41, sits under a tree on his family’s land 40 minutes outside downtown Buenos Aires. They grow corn, tomato, lettuce, pumpkins, and more.

“When I came from Bolivia I worked as a construction worker or as a peasant in lands owned by big landholders,” Trujillo says.  He joined the UTT about eight years ago and his family was able to access a fair market for their produce. “As I got involved in the Union my agriculture expertise grew and as I started to have more responsibilities in the organization, I could travel and realize how vast and diverse is what peasant families in Argentina are producing right now.”

For decades, thousands of small farmers and peasant families in Argentina worked in isolation across the vast country. They have been marginalized in an agricultural sector mostly dedicated to meat and soy. This business model reduced the diversity of food accessible to the population, and damaged the environment by depleting the soil. Food production is now in the hands of few big landowners: according to the last National Agricultural Census, published in 2019, 36 percent of exploitable lands are owned by one percent of registered owners.

According to the quoted report, soy is by far the most cultivated crop in the country: with 30 million acres exclusively dedicated to it. By the beginning of 1970, the surface dedicated to soy represented just a small amount of the oilseeds crops, but around 1990, several phenomena collided: a neoliberal government in Argentina promoted globalization and the cultivation of transgenic soy, and China’s swine industry began to grow and its demand for soy to feed pigs pushing soy prices in international markets sky high. The result is a country that dedicates almost half of its cultivable surface to a crop that does not feed its people.

UTT appears in this context. Not only a network of continuous circulation of chemical-free food, the Union shares expertise on agroecological production, provides agricultural inputs, and assists peasant families with legal problems related to their land. They also distribute their products throughout the network, which extends from northern Patagonia to the Bolivian border, nearly 2,000 miles away. For those who are part of the network, including peasants, vendors, and teachers, it all comes down to two words: food sovereignty. And the heart of UTT are the 10,000 families producing food on their own land to sell at fair prices to other families.

According to Lucas Tedesco, UTT spokesperson, three pillars sustain their work: perseverance, reputation, and clear communication. Family by family, vendor by vendor. “It is key that our organization is built from the grassroots. Families approach with a clear need and recognize our organization as a valid interlocutor,” says Tedesco. “We also insist on having a clear communication strategy in and out the organization. And that includes our presence in the streets through the Verdurazos, Feriazos, and Alimentazos,” referring to UTT demonstrations in which fruits and vegetables were sold to specially low prices in order to catch the attention of people and media. 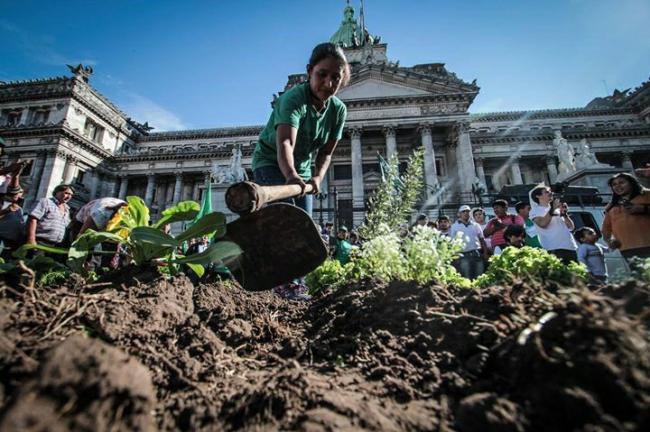 Collective organization defines the whole network: from the peasants who put their papers in order, to the vendor who sets up a Whatsapp group to sell the vegetables. UTT has the capacity to reach even its most remote members with techniques, supplies, and growing methods. The People’s Technical Consultancy (Cotepo), an institution internal to the UTT, leads this area of the organization’s work. Josué Trujillo has featured Cotepo’s workshops in many of his journeys to Northern Argentina.

“We share our knowledge on agroecological production, tools, and supplies, and people share their own knowledge, which was developed over centuries,” he says. “Many migrant families at UTT come from nations that have ancestral traditions in agriculture. Many of those techniques, which passed from generation to generation, were set aside when agro-industry and supermarkets took over. But at Cotepo we recover this ancient knowledge, sometimes hidden for years, and we add our own expertise.”

The agroecological knowledge UTT spreads includes supplies like Bocashi, an organic fertilizer, non-genetically modified seeds, and agroecological certifications given through a partnership with the National Institute of Agriculture Technology (INTA).

“In the past, we had fellow peasants who had suffered from poisoning due to the use of chemicals in the lands they worked in,” remembers Trujillo. “When I started in this, 20 years ago, it was common to use 10 liters of pesticide for every 30 or 40 square meters. Now they use three times more. When you are an employee your boss tells what to pour on the land and how. And you just do it. When we could stop working like that and discover the truth behind those processes, we realize how important it was to spread agroecological knowledge among our people,” he says.

As Trujillo’s experience have shown him, to know is not enough. If peasants cannot be owners of the lands they work, the industrial paradigm of food production will still rule Argentinian tables. That’s why the organization is promoting, and has presented to Congress, a bill to create a credit program for small farmers and peasants: the Land Access Law. The idea is simple: 2,000 families access state credits to buy two acres of land each to produce agroecological fruits and vegetables. With their profits, they live in dignity and return the loan. The UTT believes this is the next step in their work, which has been “an ant’s work”: slow and steady groundwork which, with dedication, yields results.

UTT’s grassroots model makes it simple to get involved: To form a distribution “node” you only need commitment, organization, and Whatsapp. Leaders make a WhatsApp group with their customers, UTT periodically sends priced products in a truck, and then the group coordinates delivery and payment. In the Buenos Aires Metropolitan Area, with a population of 13 million, this model grew until it covered every single district, even those where cars cannot enter. 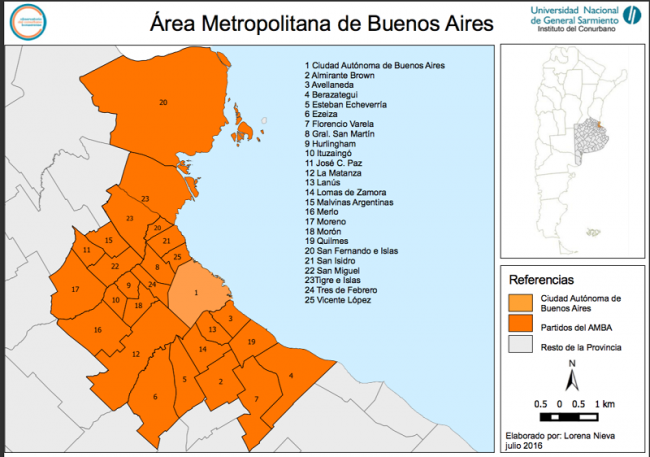 For Pilar Pittaro, who organizes a node in Muñiz, a town in the west-side district of San Miguel, being a tiny part of this giant network represents much more than selling vegetables. “I know the name of all my customers, and I have nearly 300,” she says. “But many of them are also my neighbors, so there is a bond that allows trust. In a year and a half, I had only two cases in which I did not receive the payment. This level of trust generates a supportive relationship.”

Pittaro got involved with the UTT out of her interest in agroecological food. She had a hormonal disease and her doctor recommended her to buy non-chemically treated produce. She soon found a node in her district. When the person stopped working as a distributor, Pilar had to travel long distances to get healthy food. Then she decided to become a node herself.

“From peasants to shop workers, we all want anybody to have access to these products,” says Pittaro. “Being part of UTT, it’s so comprehensive and big… It is not only vegetables. There is a social, political, cultural movement.”

The cultural movement is being developed simultaneously on many fronts: from assemblies to discuss organizing, to community workshops, to distribution nodes and more.

The UTT also uses its ethic as an aesthetic: the “food sovereignty” idea spreads on social media. The @almacenutt Instagram account of the UTT, which has attracted 100,000 followers in just a few years, gives shapes, vibrancy, and textures to complex ideas to reach their target audience. If everything is a lifestyle nowadays, why not agroecological fruits and vegetables? If many of their farmers live in beautiful landscapes, why not use beauty to attract people to the cause? Followers' high response has proven the Communication Team right.

Lucas Tedesco says, “Our role is also communicative, we build and rebuild an identity. When we say ‘we are land workers’ we mean we generate dignity, culture and, most of all, bonds of solidarity. And we spread all of this. Anywhere. Thus, we lose the shame of being what we are, or what we were. We reconstruct our stories with pride.”

Juan José Relmucao is a Buenos Aires-based journalist, researcher and content creator who has been published in Vice News en Español, Atlas Obscura, LAND, and several media outlets in Argentina.