Sexual Violence: A Weapon to Silence Women Protesting in Colombia

A young woman shares her story of suffering sexual violence at the hands of a riot police officer in Cali, one case in a broader misogynist problem. 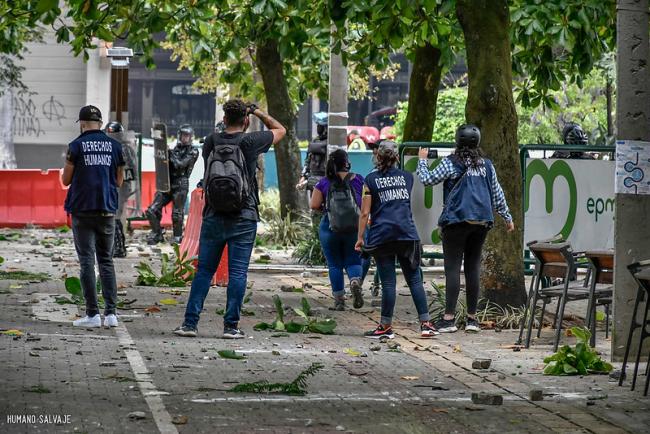 This article was originally published in Spanish by PACIFISTA!

This is part of a public statement Diana Fernanda Díaz released on social media the night of April 30.

That day, Díaz was at the protests [against the government’s tax reform] in Cali. She was at a demonstration in the Sameco area in the north of the city, her statement says, when Esmad officers charged her group of friends.

According to Díaz, the officers beat the men and separated the women. “At that time, one of the Esmad [officers] approached and abused me in the presence of his colleagues, including a woman, to whom I expressed my discontent,” she wrote.

In the midst of the situation, Díaz received a call from her father, a member of the state forces. She managed to give him the identifying details of one of the officers who, according to her denunciation, had bent her arm “to subdue me, hurting me and I couldn’t do anything.”

She says the officer was Jhon Morales, identified with the badge number DERIF-0019 and whose name was circulated on social media. Some accused him of being a sexual assaulter, but Díaz clarified in a subsequent statement that she was not able to identify the officer responsible [for sexual misconduct].

“The Esmad police official Jhon Morales did not rape me. He used force, leaving me hurt; he harassed me,” explained Díaz in a post published in the early morning of May 1. “Amid the panic, I did not manage to identify the one who did sexually assault me (to clarify, he did not rape me). However, he did touch me against my will and put his hand on my intimate parts,” she added.

This conduct, according to Article 206 of the Criminal Code, could be considered a violent sexual act. It is separate from defilement, or what we know as rape, which implies penetration. Allegedly perpetrated by a member of the National Police, [unwanted touch] remains a serious sexual crime.

PACIFISTA! communicated with the police press team to ask about this case. “The situation is being verified and the person reported doesn’t even work in Cali. There are two officials who go by that name, but yesterday, at that time, they were working in another city,” the press official said. They added that the human rights division is attempting to communicate with Díaz to verify what happened.

On [May 1], the Cali police stated in a press conference that the officer whose badge was circulated on social media is not registered in the Human Resources Information Administration System of the Santiago de Cali Metropolitan Police. They also said that the description and jacket number do not match the institution’s records.

“Considering that this act could affect the personal and family integrity of one of our employees, the cyber center is compiling the information of said publication. It will be submitted to the Attorney General’s office, where the respective complaint will be filed,” said the official in charge of the press conference.

But no further comments were made about the investigation into the officer who, according to Díaz, sexually assaulted her. The Cali Metropolitan Police only told media that they are willing to collaborate with authorities. They will submit the required information to determine the corresponding charges. 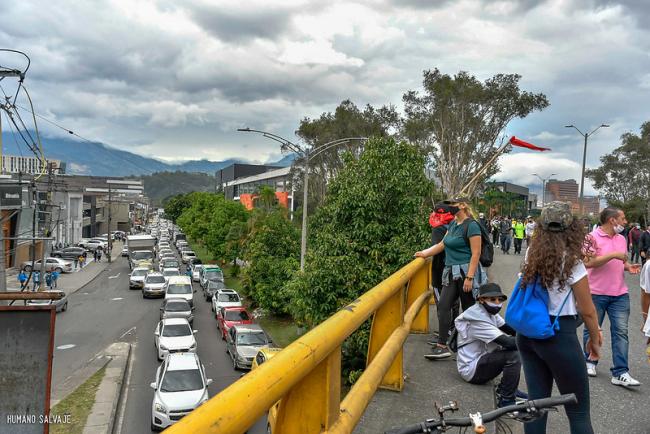 For Mónica Godoy, researcher and gender violence expert, the use of sexual violence by members of state forces is not new. “Its purpose is to intimidate women for participating in politics and taking part in the demonstrations in public space,” she said.

According to Díaz, as Esmad officers assaulted her, they said: “If you don’t want anything to happen, why don’t you stay home? Stop crying, go and keep house. If you don’t like it, why come to the marches?”

Godoy explains that these attacks are corrective measures against women. The gender group of the [human rights organization] Fundación Lazos de Dignidad agrees. “There are particular implications of such violences on the bodies of women and nonconforming [individuals],” the group told PACIFISTAS! “It has to do with degradation, excess, and abuse for the simple fact of being a woman or being gender nonconforming.”

This reality, combined with the realization of a void around how to respond to this kind of assaults during protests, led the Fundación’s gender group to create and publish, with the support of [the feminist organization] Fondo Lunaria, a “Protocol to address gender-based violence in the context of social protest.”

“In Colombia, one of the most powerful forms of gender-based violence is institutional violence. Gender is a common element in the cases of rape, torture, and aggressions of a sexual nature or forced undressing perpetrated by Colombian state forces, as well as cover-ups. This reaffirms what has historically been said: women’s bodies become trenches for war,” the document reads.

The protocol contains information about different kinds of gender violence and the behaviors that tend to be committed by members of state forces during social protests, as well as the national and international legal frameworks that protect the rights of women, feminized bodies, and the right to protest.

It also outlines a step-by-step process of what to do before, during, and after gender violence takes place in a context of protests; a series of legal and psychosocial aid; and some routes for seeking assistance that could be useful.

The Fundación’s gender group added that it is necessary to give priority attention to these situations and, in particular, to guarantee a gender approach so that “when the cases of gender violence against people in the context of protests are identified, they may be attended to in the most comprehensive manner possible, representing victims of such violations without revictimizing them.”

For Godoy, it is not by chance that these assaults are carried out in front of other officers, as exemplified in Díaz’s case in Cali.

“This sexual violence has a very strong misogynistic component,” Godoy said. “It is also done to publicly humiliate the victims. It is an act of collective abuse, not only at the hands of the one who carries out the violation, but that implicates the institution, because there are various people involved.”

In her opinion, these kinds of crimes should also be denounced as state crimes. “Not only the police or Esmad officer is responsible,” she said. She hopes that more people will report and document each case and, in the future, [organizations] will be able to take [the issue] to international bodies.

The Fundación has not directly received any reports of gender violence committed in the context of the protests that began April 28, but the organization is aware of other denunciations. [Editor’s note: the organizations Temblores and Indepaz have documented at least 12 cases of sexual violence at the hands of state forces since April 28. They also report 47 killings and hundreds of cases of police brutality as of May 8]. The Fundación’s gender group is now working to launch a support line to receive reports of cases and start a documentation process.

For them, the most urgent thing is that people in these situations be able to denounce assaults and that there be groups available to accompany and support then. “There are different women’s groups, collectives, foundations, and organizations that are ready to receive reports from people suffering gender violence in the contexts of the protests,” they said.

At the same time, the lack of justice is another form of violence. In cases of gender-based assaults, there is a more than 90 percent impunity rate in Colombia. “Members of the military…exercise this kind of violence because they know that they have a very wide margin of impunity and they know that they will not be punished,” argued Godoy.

“I will press charges,” wrote Diana Fernanda Díaz. “This is to let many people know that although I protested, marched, or demonstrated in a peaceful way, it didn’t matter to them. Unite. This will not stop me. Stronger than ever!”

Laura A. Torres Martínez is an anthropologist and a journalist with PACIFISTA!