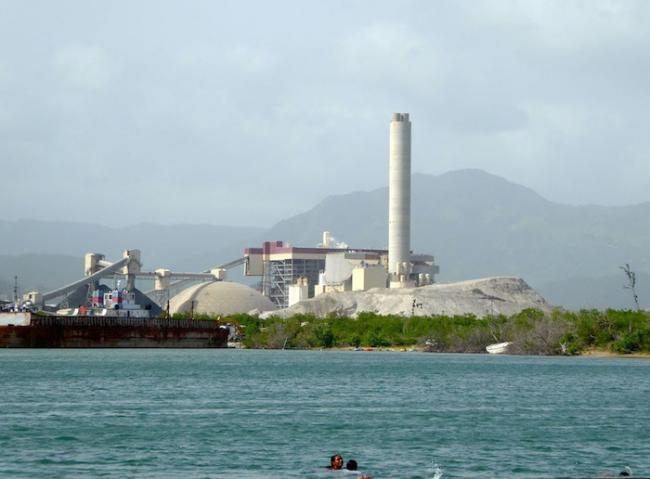 The gentle descent from Puerto Rico’s central mountains into the southern coastal plain offers a spectacular seaside vista. It is a panoramic view of a seemingly vast Caribbean Sea in varying hues of tropical blues with lush-green, jewel-like keys dotting the sparkling Jobos Bay. This arid coast, with its low-growing grasses, verdant fruit trees, and wetlands and mangroves bordering the shore, is often framed by an expanse of cloudless blue sky. Every single time I descend I am awed by the beauty of the region my family calls home.

As you drive closer, details of human activity along the coast begin to emerge: neatly aligned row housing, boats of varying sizes in the sea, and expanses of reddish soil ready for cultivation. There are also industrial smokestacks, chutes and tanks, factories, power plants, and two large mounds: one of shimmering raw coal and a second even bigger one made up of dull gray, toxic coal ash. This region was once the site of expansive sugarcane plantations, and ruins of this sugar past remain in the landscape like specters haunting residents. For some, the memories are remnants of a golden, prosperous, bygone era; for others, they are reminders of sunup-to-sundown work in the hot and humid fields that was often accompanied with hunger, poverty, and premature death.

The people who labored in these fields—first enslaved Africans, then their descendants who became Black- and Afro-Puerto Rican low-paid workers—mark this region as one of the archipelago’s Black cultural zones. In my work, I make a distinction between Black- and Afro-Puerto Ricans to signal, respect, and recognize the varying life experiences of individuals who are “obviously” or “unambiguously” Black versus individuals who are Afrodescendants, but who may or may not be understood or “seen” as Black across geographic and cultural contexts. Today, the siting of heavy industry on the southern coast has unloaded a burden of environmental injustice on this majority Afrodescendant population.

Perhaps more than any other region in the archipelago, this Black cultural region lives within and in the wake of the plantationocene. This name for the Earth’s current epoch pinpoints the role of European invasion and colonialism, large-scale extractive agriculture, and racial capitalism in fomenting planetary crisis. Its emblematic aspects are its continuous extraction, disciplining of labor and ecology, policing, land clearing and removal of redundant inhabitants, and disruption and devaluation of everything—both human and more-than-human—that does not generate profit or value for wealthy industry owners and their political allies. Viewing the world from the vantage point of the plantationocene, as I do here and in my work more generally, reveals how the five centuries-long enactment of anti-Black racism, sexism, and crushing oppression of the poor has inevitably led to the present era of impending socioecological collapse.

Carmen, a 61-year-old grandmother whose grandfather, father, brothers, and husband all worked as sugarcane cutters, was coming of age when the Aguirre Power Complex was first built in the early 1970s in the southern coast town of Salinas, where she lives. She now recalls wistfully how the plant—long owned by the Puerto Rico Electric Power Authority (PREPA), a government agency—held the promise of jobs and economic prosperity for the region. But the assurances the government made long ago, she explained, contrast sharply with the current reality of empty(ing) neighborhoods due to out-migration, mass unemployment, and poverty. There is no end in sight to the disproportionate contamination and pollution that residents seem condemned to endure. “We have a right to live in a clean environment,” Carmen said in an exasperated tone. “Or it is because we are poor that we have to get used to being sick as a result of industrial contamination in our communities? Do we not have the same human rights as the wealthy and white people in this country?”

In environmental justice circles, particularly in the Global North, we have grown accustomed to hearing and repeating the clarion call that the only viable future is one that is free of fossil fuels. But which populations can expect to live in a fossil-free and environmentally just future? In light of the continued global dependence on diesel, oil, coal and, increasingly, methane to produce electricity, this is a pressing question. 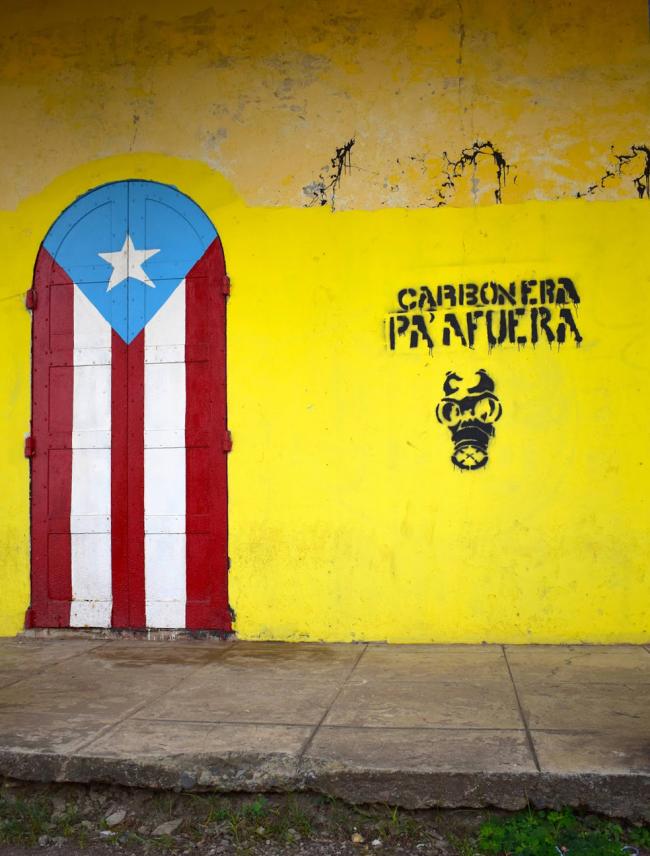 In 2019, Philip Alston, the United Nations special rapporteur on extreme poverty and human rights, sounded the alarm about the ensuing era of climate apartheid. If unstopped, this era will widen the gulf between the economic privilege of the Global North and the catastrophic climatic, ecological, health, economic, and social perils experienced by the majority of the world’s vulnerable, who reside in the Global South. He warned that this would create a world where “human rights may not survive” and “the wealthy pay to escape overheating, hunger and conflict while the rest of the world is left to suffer.” It is important to add that achieving environmental justice is integral to fulfilling social, political, economic, and ecological rights.

In 2021, residents of Puerto Rico’s Jobos Bay are experiencing a version of this climate apartheid. Perhaps uncoincidentally, on December 10, 2017, Alston visited Jobos Bay communities to witness the impacts of Puerto Rico’s centralized fossil-fired energy generation in the wake of Hurricane María. The area is home to both the Aguirre Power Complex, which produces energy by burning diesel and bunker C oil, and a coal-fired power plant owned by AES Corporation, a power generation company headquartered in Virginia. Alston heard residents’ testimonies about their experiences with environmental injustice, racism, and poverty. “Community members noted severe negative impacts on their health and economic activities; neither federal nor local authorities had taken action,” stated the rapporteur’s final report. Yet as interest in Puerto Rico’s post-hurricane reality wanes, Jobos Bay residents continue to drift in the tides of the climate crisis. Ninety seven percent of the archipelago’s electricity is produced using dirty and highly contaminating fossil fuels, which generate harmful consequences for both residents and the local ecosystem.

In its 10-Year Infrastructure Plan, PREPA proposes to “harden” and rebuild the existing transmission and distribution lines. Environmental activist Ruth Santiago explained that this would mean continuing to transfer energy from the large island’s south to the north, cutting across the steep inclines of the central mountain range. Aside from the fact that this plan would continue to supply electricity at the expense of the human and environmental health of impoverished Afrodescendant communities, such as those living in the shadow of the Aguirre and AES plants, this existing transmission and distribution system is vulnerable to high winds, intense rains, and landslides. Hurricanes Irma and María’s near-total decimation of the existing grid evidenced that the reliance on long-distance energy transmission is no match for the new normal in the era of climate crisis, which is expected to bring more intense storms and hurricanes in tandem with sea level rise. Additionally, much of the existing energy infrastructure is located in flood-prone areas, near wetlands, and in zones at risk of the impacts of sea level rise, storm surges, tsunamis, and seasonal flooding.

In Puerto Rico, environmental injustice and the violation of human rights are inextricably intertwined. We can trace the southeast’s ongoing fossil-fuel powered environmental injustice and the violation of residents’ right to a safe environment to the contours of Puerto Rico’s mid-20th century industrialization process. At that time, this sugarcane plantation region became disproportionately burdened with highly contaminating industries. These “modern” industries— such as the now shuttered hydrocarbons refinery Chevron Phillips Chemical Puerto Rico Core, several multinational pharmaceutical manufacturers, the U.S. military installation Camp Santiago Training Center, and the Aguirre Power Complex—were billed as the engine that would power a socially and economically future-oriented Puerto Rico. Even though Puerto Rico’s Environmental Quality Board was established in 1970, these industries operated, and still operate today, with minimal regard for environmental protections.

At the dawn of the 21st century, coal power plants began closing in the Global North due to the confluence of more stringent environmental regulations, cheap prices of methane gas, the push for renewables, and growing campaigns to end the use of dirty fossil fuels. Yet during this time, the privately owned AES coal power plant—the only coal plant operating in Puerto Rico—opened in Jobos Bay in 2002. A pretext for the plant was that it would power the growing energy-hungry tourism sector. Decision-makers also claimed that private utilities are much more efficient and reliable than public ones. In terms of confronting the climate crisis, the private versus public argument does not stand a chance, as both the Aguirre Power Complex—previously owned by PREPA, but as of June 1, 2021, privately managed by LUMA Energy, a U.S.-Canadian joint venture—and its privately owned neighbor, the AES coal plant, were similarly damaged and concurrently offline after Hurricane María. The AES plant produces about 300 million tons of toxic coal ash each year, and that waste is piled in a three-story mountain on the plant’s grounds. It is left exposed to the elements while it awaits shipping by sea out of the island. In thinking about a just environment, it is important to ask: where is Puerto Rico’s toxic, highly dangerous coal ash dumped, and what communities are negatively impacted?

A safe environment is one that is not destructive to human health, is safe from contamination and pollution, and allows for the attainment of adequate health and well-being. The environmental justice movement understands the environment as all the places where “we live, work, play, and worship.” Residents in the Jobos Bay region are denied the right to carry out these activities in a safe environment, and they experience disproportionate health impacts such as high rates of asthma, cancers, renal dysfunction, spontaneous miscarriages, hearing loss, skin rashes, and anemia, among other illnesses. Local and multinational corporations, in collusion with the local and federal governments, actively contribute to degrading the environment on a massive scale, endangering both human and non-human species, and harming the well-being of residents in these Afrodescendant communities.

Read the rest of this article here, available open access for a limited time. View the full table of contents from the Fall 2021 NACLA Report here.

Hilda Lloréns is an Associate Professor of Anthropology and Marine Affairs at the University of Rhode Island. She is the author of Making Livable Worlds: Afro-Puerto Rican Women Building Environmental Justice (2021).