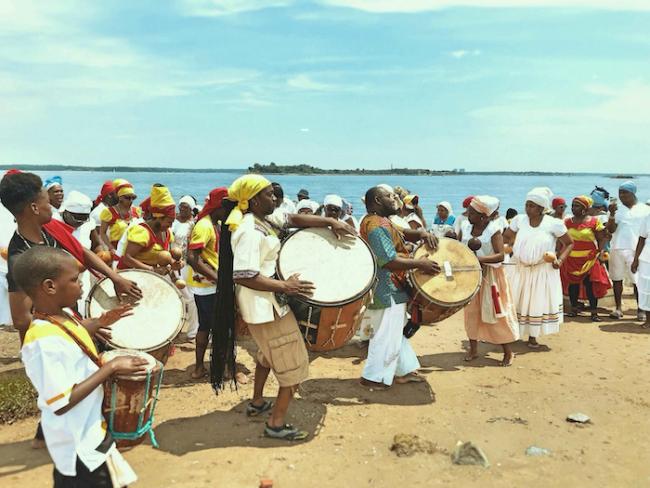 Garifuna life is matrifocal. Garifuna women are not simply the head of the household, but they are also at the center of organizing and governing every family structure, which extends beyond biological kinship. This is not a uniquely Garifuna experience. Throughout the African diaspora in the Americas, Black women are often the head of the household. Especially if we consider non-heteronormative notions of family and kinship, Black women have been at the forefront of preserving and protecting Black life over centuries, as anthropologists Christen A. Smith and Keisha-Khan Y. Perry have documented. However, a matrifocal or matrilineal society does not dismantle misogynoir, patriarchy, racial capitalism, and anti-Blackness. I write this matrilineal love letter to honor, celebrate, and center Garifuna women’s political, intellectual, spiritual, cultural, and knowledge producing labor that often goes unseen, uncited, or undervalued in a world that remains heteropatriarchal and anti-Black.

Garinagu, or Garifuna as they are popularly known, are Black Indigenous peoples whose ethnogenesis lies in 15th century St. Vincent, an island in the Lesser Antilles. As shipwrecked enslaved West Africans and Carib and Arawak peoples, Garinagu were born from marronage and resistance to European colonialism, which marks them as maroon Indigenous Blacks. In 1797, British colonial forces exiled Garinagu to the Bay Islands of Honduras, sparking subsequent migrations to Belize, Guatemala, Nicaragua, and mainland Honduras. By the mid-20th century, the decline of the United Fruit Company’s banana plantation economy on the Caribbean coast, combined with the legacy of centuries of anti-Black racism and land dispossession, ignited the first major wave of Garifuna transnational migrations. Beginning in the 1950s, these communities settled in major U.S. port cities such as New Orleans, New York, Chicago, Houston, San Francisco, Miami, and Los Angeles. Today, government corruption, state violence, dire economic conditions, gang and drug-trafficking crime, and persistent anti-Blackness continue to propel Garifuna to cross the U.S.-Mexico border. In recent years, southern U.S. cities such as Houston, Atlanta, Tampa, and Charlotte have become homes to Garifuna Central Americans.

Garinagu peoples are simultaneously Caribbean and Central American, as well as Black and Indigenous. Yet, in Central America, Blackness and geography are intrinsically entangled with histories of Spanish colonialism, U.S. imperialism, and centuries of anti-Black racism, consolidated in the nationalist racist myth of mestizaje. Mestizaje, as political theorist Juliet Hooker explains, emerged as a racial discourse in the early 20th century to distinguish Latin America’s imagined racial democracy from U.S. Jim Crow apartheid amid a broader critique of U.S. imperialism in the hemisphere. As an imagined racial mixture and mythical racial sameness bounded by nationalism, Central American mestizaje relegates, alienates, and ascribes Blackness to the Caribbean coast, erasing centuries of Black folks living in the interior and Pacific coasts.

In this way, mestizaje is a racial project in opposition to and in negation of Blackness. The Caribbean coast is understood to be removed from the national public spaces of mestizo governance in the capital cities of Managua or Tegucigalpa in Nicaragua and Honduras, respectively. This positions Central American Blackness as coming from elsewhere, rather than already always present prior to the formation of the Republics. More recently, what Charles R. Hale refers to as neoliberal multiculturalism constructs Blackness in Central America as a folkloric caricature for tourist and popular culture consumption, as Christopher Loperena has observed.

At the same time, Blackness and Indigeneity are understood in the Americas as mutually exclusive racial categories. Garifuna folks are persistently constructed as an anthropological puzzle, as anthropologist Mark Anderson has noted, because of their seemingly contradictory identity as simultaneously Black Indigenous peoples. As Black queer feminist theorist Tiffany Lethabo King writes in her 2019 book The Black Shoals, “Genocide and slavery do not have an edge.” Indeed, the articulation of Indigenous Blackness is not unique to Garifuna, as there are several communities of African descent throughout the Americas whose Indigenous ancestry and lineage shape their political consciousness as Black Indigenous. These include the Gullah/Geechee people of the southeastern U.S. coast, the Seminoles historically of Florida and forcibly removed to Oklahoma, quilombolas in Brazil, Jamaican maroons, and inhabitants of palenques or “free towns” in Colombia, among others.

In the United States, talk of Central America conjures a set of racial and political imaginaries that center mestizos, Indigenous cultures, revolutionary movements, civil wars, and U.S. occupations. These associations eclipse a discussion of race and racism in the region and its diasporas. Within U.S. Latinidad, singular narratives of Latin American and Caribbean identity also render Blackness invisible. Therefore, Black Central Americans—a term I use to invoke Blackness in a region of the Americas racialized as a non-Black space—doubly negotiate their invisibility on the isthmus and in their diasporas in the United States. Despite the extensive and rich history of Africans and their descendants in Central America, especially their presence and contributions prior to independence in 1821, Black history and Blackness remain alien to Central American nationhood, both in and outside of the isthmus.

These embodied histories of anti-Black racism, land dispossession, violence, and erasure shape how Black Central Americans who migrate to the United States negotiate, perform, and articulate their Blackness and Latinidad. In particular, since the late 1950s, Garifuna New Yorkers—the largest Garifuna population outside the Caribbean coasts—have been navigating transgenerational migrations, building cultural movements, and engaging in political mobilizations across multiple national and racial or ethnic borders.

In my research, my interlocutors—who mostly live or have lived in New York City— understand their Garinagu Black Indigeneity as rooted in the Caribbean, Central America’s Caribbean coasts, and the United States. They use multiple terms to describe their identities, including negro indígena (Indigenous Black), afroindígena or Afro-Indigenous, Black Indigenous, and Black Carib. These variations point to the multiplicity of geographies informing Garinagu racial identity formations. In Central America, Garinagu notions of (Black) Indigeneity are bound to land and cultural traditions: claiming Indigeneity is a political move to claim land rights and titles. In the United States, and more specifically in New York City, Garifuna folks use Indigeneity—that is, their Carib and Arawak lineage stemming from an imagined homeland in St. Vincent—as a marker of cultural difference within Blackness. My framing of hemispheric Indigenous Blackness thus comes directly from my interlocutors. 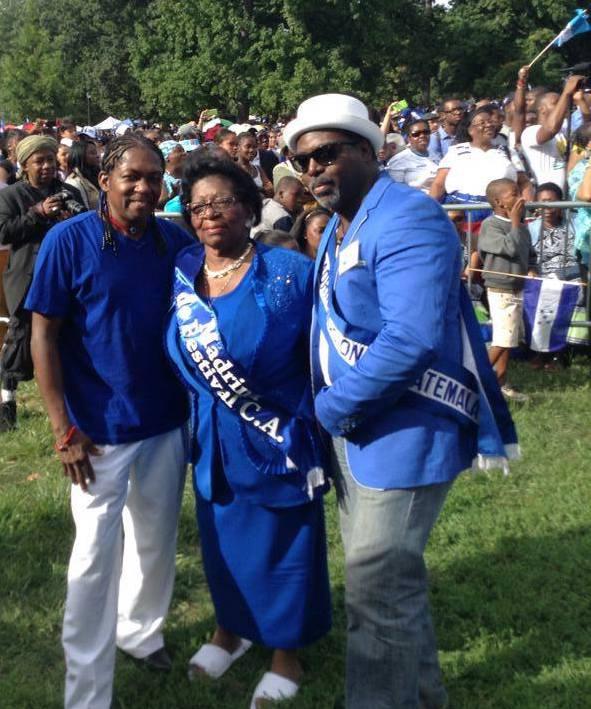 Aida Lambert, a Garifuna woman born and raised in Honduras, came to New York City in 1964. At the time, Central Americans, especially Garifuna folks, did not have much visibility in the ethnic pantheon of New York City’s Latinidad. Having arrived a few years prior to the economic collapse of the United Fruit Company, Lambert forms part of the second-largest migration of Garifuna to New York. Through her kin networks she arrived in Brooklyn and later moved to East Harlem with her children. In the mid-1980s, Lambert was a founding committee member of the Desfile de la Hispanidad, an annual Hispanic parade born from NuyoRicans and recent Puerto Rican migrants wanting to exhibit their culture, work ethic, and racial differences from their African American neighbors. Lambert’s involvement developed out of her language barriers with English-speaking Blacks and her cultural and linguistic bond with Puerto Ricans and Dominicans. In her autobiographical narration, “We Are Black Too: Experiences of a Honduran Garifuna,” she illustrates the complexity of experiences between African Americans and Spanish-speaking Black immigrants:

I have found that even though you are Black, the fact that you are Latina means to them [African Americans] that you are of another race…Even at home, in Honduras, our Garifuna culture, and our language, is losing ground and becoming less and less familiar. And here it is even more so. My own children, as much as I try to keep the culture alive, they have their own lives and often forget whatever they learn. Not to mention my grandchildren, who were born here. I warn them about my experiences with African Americans, but they play with them, are influenced by them, and join them. They make friends with them, they identify with them, in the way they dress, and talk, and the music they listen to. And what can I do, I have to let them choose their own culture preferences.

Lambert’s testimonio is telling of her generation of Garifuna Honduran immigrants and their engagement and inclusion into Puerto Rican and Dominican social mobility.

The generations of Garifuna New Yorkers following Lambert’s arrival to Brooklyn and Harlem negotiate Latinidad in multiple ways: they simultaneously reject and interject into Latinidad, a marker that makes Garifuna Blackness distinct from African Americans, while also using Garifunaness to distance themselves from mestizo Latinidad and AfroLatinidad. Lambert’s feeling of rejection by Black Americans and acceptance by Puerto Ricans is a significant memory for a number of reasons, particularly because Garifuna Central Americans migrate to the United States at the intersections of anti-Black racism, non-democratic governments, and economic instability.

Read the rest of this article here, available open access for a limited time. View the full table of contents of the Fall 2021 NACLA Report here.

Paul Joseph López Oro is an Assistant Professor in the Department of Africana Studies at Smith College. He is currently working on his first book manuscript, tentatively titled Indigenous Blackness in the Américas: The Queer Politics of Garifuna New York.