Over the last few months, protesting Colombians have formed popular assemblies to demand change in their communities and beyond. 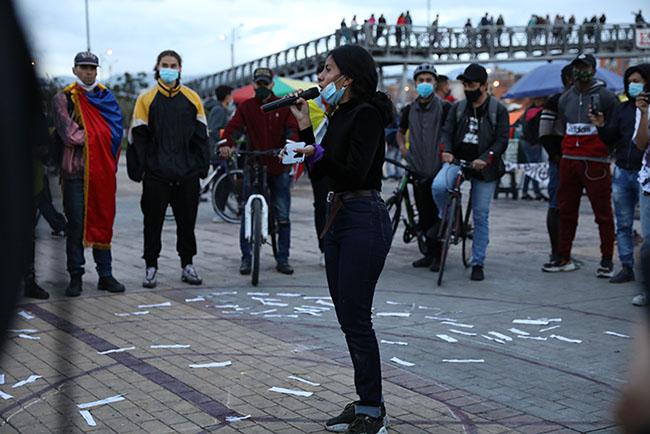 Brayan Arenas, a 30-year-old environmental activist, has marched in Colombia’s mass protests since its earliest days in late April. He chanted and clamored in the streets of Bogotá so that potable water and other basic services would one day become available in the makeshift homes where he grew up in the northern stretches of the capital city.

But as protests wind down, he’s found himself increasingly off the streets and instead, advocating for change in hours-long gatherings with activists, students, and local leaders.

“I join these meetings because I want to be heard,” said Arenas at a recent gathering with 30 residents in Usaquén, a locality in Bogotá, to discuss a final list of demands.

A national strike against a since-withdrawn tax reform in late April sparked a mass movement against entrenched inequality and police repression, drawing thousands of people to the streets. Students, unionists, and Indigenous and Afro-Colombian activists came out in droves, but many protesters were ordinary citizens without any affiliation to an organized movement. 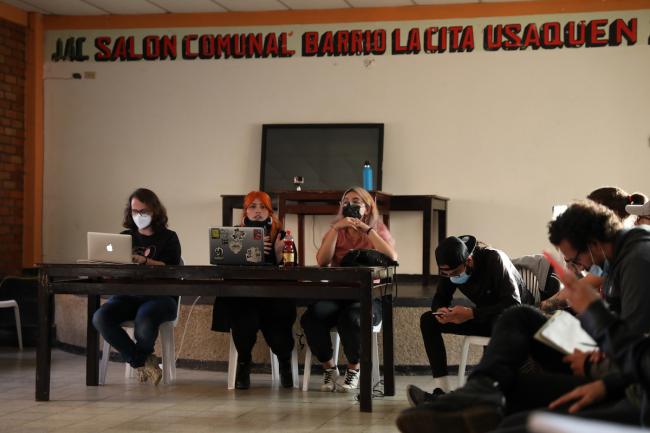 These protests fizzled out by mid-July, but in their wake, a countless number of spontaneous gatherings have popped up in cities and rural towns alike. In these spaces, locals seek dialogue and collective action to solve the systemic poverty and inequality plaguing the country.

As the political analyst Daniela Gómez points out, the popular assemblies, as they are known locally, address a key issue that has hindered the movement: for those without a particular affiliation to any organization, protesters are divided on the question of demands and strategies. The assemblies provide a space for citizens to work out differences and plan their next steps.

“We’ve seen new citizens protesting that aren’t part of any of these traditional organizations that have mobilized social movements,” said Gómez, in reference to the student and union groups that historically have led protests. “The popular assemblies are a response to that. They give meaning to the protests and allow citizen groups to ground some of their expectations.”

Protests and clashes continue to break out sporadically in Colombia. Some of the most recent incidents took place on July 20, Colombia’s Independence Day, when right-wing President Iván Duque introduced a new tax bill. The first iteration, which was proposed on April 15 and rescinded days after protests started, was slammed for disproportionately affecting the poor and middle classes in the name of raising revenue for the fiscal gap. The new legislation instead focuses on austerity measures, anti-corruption policies, and a tax hike on businesses, but it has received pushback from opposition figures who believe new revenue should come from tax increases on the rich.

On July 20, the local NGO Temblores received 128 complaints of police abuse, adding to tensions that have grown increasingly volatile between police and protesters. The first two months of protests resulted in 44 deaths, presumably caused by police, according to Temblores. With protests continuing to flare up, there are concerns that the death toll will continue to rise as police crack down on marches and popular protest sites.

Three months after the national strike started, some of the largest protests have taken place in neighborhoods far from the main plazas and central city thoroughfares. Instead of the traditional marches in those locations, neighborhoods devoid of educational or employment opportunities have erupted as sites of protest where masked youth have emerged as leaders.

Many of the reasons that initially brought thousands to the streets, including poverty and inequality that worsened during the pandemic, have remained unaddressed by the government. Aside from withdrawing the tax reform, President Duque made some concessions, such as pledging a semester of free college tuition and promising investment in job opportunities for youth, many of whom protested in unprecedented numbers. Amid reports of police abuse and excessive force, the government also issued a police reform that includes a change in uniform color from army green to “civilian” blue, which critics lambasted as ineffective. 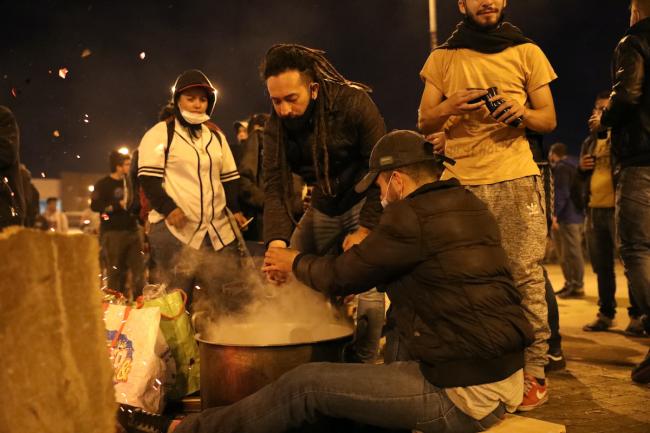 Together, these measures fall short of the structural changes called for by protesters. Outrage has simmered for years over inequality and social barriers, which make it almost impossible for new generations to break out of extreme conditions of poverty. As the Organisation for Economic Co-operation and Development reported, it takes 11 generations for children of poor families to reach the average income. Even on a regional level, Colombia stands out for its levels of inequality; the World Bank found Colombia to be the second most unequal country in Latin America, only behind Brazil. Part of the problem stems from high job informality, which worsened during the pandemic. The economic crisis increased the percentage of workers in the informal sector to almost 50 percent and the number of people living in poverty to 21 million.

The Rise of Popular Assemblies

For many protesters in the streets, the national strike raised hopes that change was possible. But after years of disillusionment with politicians and wayward protest leaders, groups of outraged citizens are taking it upon themselves to build change from the ground up. Their objectives include identifying urgent problems afflicting their communities and drawing up a list of demands they expect the local and national government to resolve. They do this by meeting regularly in popular assemblies, many of which have formed since the start of protests.

One of the first popular assemblies to take place in mid-May was in Portal Resistencia, a bus terminal in the Bogotá working-class neighborhood of Kennedy that became a popular protest site. There, an organizing committee with the capacity to host massive concerts, sports matches, listening circles, and daily soup kitchens evolved in less than a month. Collectives that had taken a hiatus during the pandemic were nurtured back to life by the mass outbreak of protester energy. As more people joined, the committee decided that a series of popular assemblies could bring a sense of direction to the crowds of hundreds that now coalesced regularly at the site.

“A popular assembly is a space for dialogue, for us to begin to think about what the problems are that afflict us, what has brought us to this social outburst, and what solutions we see,” said Daniela, a 26-year-old activist at Portal Resistencia, who preferred to go by her first name. 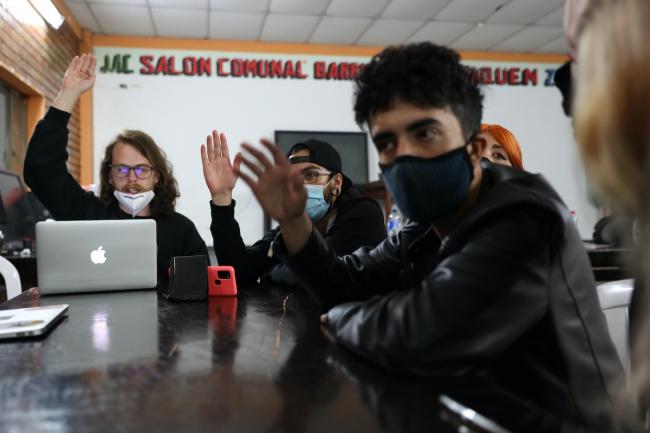 According to Daniela, the meetings drew hundreds at a time. Nearly 100 people attended the first meeting where protesters and city officials discussed police abuses. In the following two meetings where participants created a list of demands, attendance reached 250 and then 350. The main challenge was to find common ground among people from all walks of life. “What we learned from these assemblies was to identify the needs of others because depending on life trajectory, class, gender, sexual orientation, gender identity, ethnic group, these needs are different,” said Daniela.

After three popular assemblies, attendees agreed on a list of 93 demands that covered issues such as healthcare, employment, the environment, and police reform. On the national level, they sought a reduction of congressional salaries, regulation of the informal labor market, free college tuition, and support for the right to hold popular referendums, a binding vote that has been employed in various towns to block mining projects but that the Constitutional Court rendered ineffective in 2019. On a local level, people called for a new hospital, more spaces for political participation, a revision of bus fares, and unemployment assistance.

The final document was put to a vote, in which anyone older than seven years old, including foreign nationals, could participate. About 3,000 people voted, according to Daniela, 97.6 percent of whom approved the demands. When asked to explain the high turnout, Daniela explained that “one of the fundamental grievances voiced during the strike has been that the people don't feel heard.” As the protests went on, “the social outburst had to have a focused objective, and people wanted to be part of that process,” Daniela said.

A similar scene has played out in Cali, Colombia’s third largest city and a hotbed of unrest, where local youth erected blockades and expelled police from their neighborhoods in the early days of the strike. A community formed around soup kitchens and art activities at protest sites, and 26 such sites banded together as Union of Resistances Cali (URC) to head negotiations with the city.

Nationally, there have been other initiatives, such as the National Popular Assembly, to create new channels of communication between social organizations and local unions.

Part of the initial outrage that fueled protests in April can be traced back to a deep distrust of public officials and institutions. Fury ensued after then-Finance Minister Alberto Carrasquilla, the architect of the unpopular tax bill, mistakenly estimated the cost of eggs in a radio interview. The political gaffe reinforced popular perceptions of a government out of touch with its constituents.

While already unpopular, President Duque’s favorability sank to new lows during protests—down to an 18 percent approval rating, according to one poll released in May. The legislature, an institution historically reviled in Colombia for its corruption scandals, reached its worst moment in almost two decades, with an 87 percent disapproval rate in late June.

The national strike committee, made up of trade unions and student groups, gained national recognition during the protests for convening the strike and negotiating demands with the government. After the tax reform was removed, it continued to press for a universal basic income, a free tuition plan, protections for local industries, among other demands. 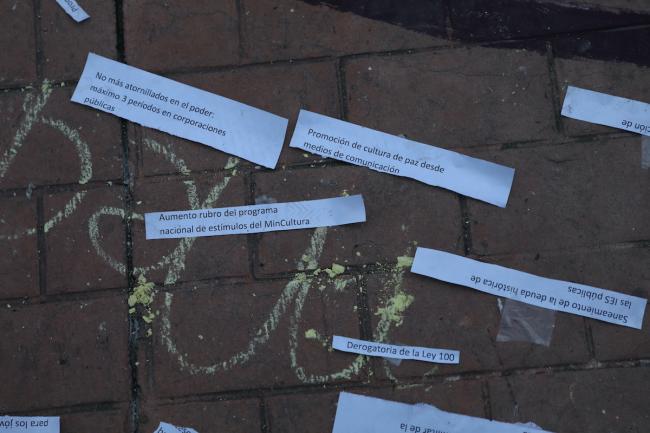 But their leadership has also been rejected by some communities at the forefront of protests.

“There is a crisis of representation,” said Gómez, the political analyst.

Diego Vega, a spokesperson for the National Popular Assembly, agrees.

”There is only a minority sector of unions, which even if it does represent lots of people, it doesn’t represent the diversity of people in the streets,” Vega said, pointing to youth and people from rural communities as active protesters without representative leadership.

The strike committee halted talks on June 15 after the government backtracked on basic safety guarantees for protesters. But on July 27, it introduced nine bills to Congress with the help of allies in the legislature.

“We hope that Congress will have more political will to negotiate, the political will that President Duque showed he didn’t have,” Francisco Maltés, president of the Central Union of Workers and committee spokesperson, told local newspaper El Espectador.

Without anyone to fight for their interests, Colombians have organized and created their own solutions. At the recent assembly in Usaquén, people shared stories of state neglect and desperation. Torrential rains had recently buried dozens of makeshift homes, which were clinging to Bogotá’s mountainside before, and left hundreds without shelter. While some lamented the shrinking number of protests, Jonathan Rincón, a 27-year-old teacher, saw an opportunity to strengthen the movement.

“The social outburst has to be used to keep organizing,” said Rincón. “The popular assembly has to be strengthened for the next moment when people return to the streets.”

Christina Noriega is a freelance journalist based in Bogotá, Colombia, where she writes on human rights, gender equality, social movements, and the environment.