Crisis in Nicaragua: Is the Ortega-Murillo Government Leftist? (Part I)

Despite its revolutionary rhetoric, the Nicaraguan government has implemented policies that veer away from the Sandinistas’ socialist roots. 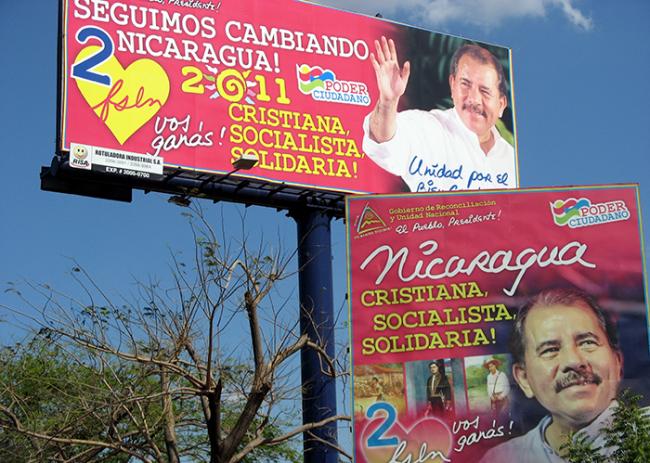 Three years after the government of President Daniel Ortega and his wife, Vice President Rosario Murillo, violently repressed a mass popular uprising that killed several hundred and sent tens of thousands more into exile, Nicaragua is once against making international headlines as the country slides into renewed political crisis in the run-up to the November 7 general elections.  In recent months, the government has arrested and held without charge seven opposition presidential contenders and several dozen other opposition leaders under draconian national security laws decreed in early 2021 that suspended habeas corpus. Those arrested or forced underground or into exile since the latest crackdown began include a number of historical revolutionary leaders, among them legendary guerrilla commanders Dora María Téllez and Hugo Torres. Both participated in the 1978 raid on the National Palace that forced the Somoza dictatorship to free 60 political prisoners, and Torres also participated in the daring 1974 Christmas party raid that forced Somoza to release Daniel Ortega from prison.

If the 1980s revolution led by the Sandinista National Liberation Front (FLSN) inspired progressives the world over, the crisis is now generating deep fissures within the U.S. and international Left. As it did in the wake of the 2018 protests, significant portions of this Left continue to insist that Nicaragua is experiencing a renewed revolutionary process under the leadership of Ortega-Murillo and that the United States is bent on overthrowing the regime. These accounts point to social programs introduced by the Ortega once he resumed power in 2007 and to U.S. funding for a number of Nicaraguan organizations associated with the anti-Sandinista opposition.

What is Left in Nicaragua?

Relentless U.S. intervention throughout the 1980s, including a counterrevolutionary military campaign, an economic embargo, and internal political interference eventually led to the Sandinistas being voted out of office in 1990. This electoral defeat plunged the Sandinista party into a sharp internal crisis over programs, ideological orientation, and strategy. The Sandinista grassroots engaged in sustained resistance in the early 1990s to the neoliberal program imposed on the country by the United States and the international financial agencies in consort with the local capitalist class and conservative politicians. At the same time, however, a new Sandinista elite also made its appearance among those who had acquired substantial properties during the 1990 regime change by privatizing to themselves—in what is known in Nicaragua as “the piñata”—the state assets, public property, and Sandinista party resources that constituted the collective patrimony of the revolution.

As the 1990s progressed, new Sandinista landlords and businessmen began to develop an affinity of class interests and to ally with the traditional bourgeoisie. Throughout that decade and the next one, hundreds of historical Sandinista leaders, along with thousands of party members, left or were forced out of the FSLN as the Ortega faction gained an iron-clad control over the party machinery and suppressed all attempts to renovate and democratize the party. This reduced the FSLN to a shell of the historical party. The new Sandinista elite gradually moved from leading the popular classes in their resistance to the neoliberal program of capitalist reconstruction to using the party's dwindling authority to contain these classes and control their mobilization.

Yet the FSLN leadership continued to legitimate itself with a revolutionary discourse that no longer corresponded to any political program or conduct other than that of furthering its own group interests and securing a place among the dominant bloc in the new neoliberal order. Ortega has proved to be remarkably adroit at using radical-sounding language and anti-imperialist rhetoric to strike a reflexive chord of support among the international Left. But it is hard to see what if anything would qualify the regime as revolutionary or socialist. Ortega returned to power in 2007 through a pact with the country’s traditional right-wing oligarchy, the former members of the armed counterrevolution (known as the contras), and the conservative Catholic Church hierarchy and Evangelical sects. Promising absolute respect for private property and unrestricted freedom for capital, he then proceeded to co-govern with the capitalist class, organized into the Superior Council of Private Enterprise (COSEP), until the latter broke with Ortega in the wake of the 2018 protests.

After reentering office, the government renationalized the health and educational systems, increased social spending, invested in infrastructure, and introduced other welfare projects (to be doled out through FSLN patronage networks). These social programs were welcome and important gains for the popular classes after years of relentless privatization and austerity. But they did not alter the essential neoliberal model put into place by the three governments that preceded Ortega’s return to power. To the contrary, Ortega-Murillo vigorously and violently defended existing class and property relations, receiving praise from the International Monetary Fund (IMF) and the World Bank for its pro-capitalist, pro-transnational corporate policies, as well as acclaim from the United States for its cooperation with the U.S. Southern Command, the Drug Enforcement Agency, and U.S. immigration policies.

Meanwhile, the nepotistic inner circle of the regime has enriched itself through plunder of state resources, in particular through its control over Albanisa, the shadowy financial and oil conglomerate established with several billion dollars in Venezuelan subsidies. The eight Ortega-Murillo children serve as advisors to the presidency, own or control an empire of private and ostensibly public television, radio, and internet news outlets, manage public investment funds, and run a network of family businesses.

Social indicators improved in the early years of Ortega’s return to power, so long as commodity prices were high, the influx of foreign investment continued, international credits remained abundant, and the spigot of several billion dollars in the Venezuelan petro-dollar subsidy stayed open. Notwithstanding, it is difficult to get any independent confirmation of the government’s claim, echoed by its defenders abroad, that poverty has been cut in half. This is because the typical source for this data is the World Bank, and in turn the Bank relies on official Nicaraguan government data. Accounts that report a startling improvement in living standards, such as one issued by the pro-Ortega Council on Hemispheric Affairs in Washington, DC, either rely solely on Nicaraguan government claims, or simply do not provide sources for such data at all.

The Managua-based independent research institute International Foundation for the Global Economic Challenge (FIDEG) has conducted annual household surveys since 2009. These surveys are considered by poverty researchers to be a more reliable assessment of poverty rates than GDP-per capita and other forms of aggregate data. According to the 2020 FIDEG report, poverty rates declined slightly, from 44.8 percent in 2009 to 39.0 percent of the total population in 2014. But then poverty rates started to climb in 2015—three years before the 2018 crisis that the government claims is responsible for rising poverty rates—reaching nearly 45 percent of the total population by 2019 and essentially wiping out the mild gains registered in the early years of the Ortega-Murillo regime.

The Bonanza for Transnational Capital

The regime has not developed any of the policies typically associated with a socialist-oriented agenda. In the countryside, the agricultural sector is dominated by transnational agribusiness. In the early years of its return to power, the Sandinista government provided limited support to the peasant sector through a clientelist model of handouts. But land reform was entirely off the agenda. Instead, the capitalist development strategy subordinated the peasantry to the agribusiness sector. Displaced peasants were encouraged to push into and colonize what remained of the agricultural frontier in the less populated eastern side of the country. In the course of capitalist development in Latin America this is the well-known pattern of rural capital accumulation. By the mid 2010s, settler colonization further penetrated into the Atlantic region, where the Indigenous and Afro-descendent populations are concentrated, encroaching and violating their communal lands, disrupting local autonomy, and sparking an escalation of ethnic conflict that has led to numerous killings and displacement of these populations.

Banking, agriculture, industry, imports, and exports are all controlled by local and transnational capitalist conglomerates; 96 percent of the country’s property is in the hands of the private sector. There are no capital controls, no progressive tax policies (to the contrary, tax policies are regressive), and no tolerance for autonomous mobilization by the popular sectors. The regime has routinely deployed the army, police, and paramilitary forces to violently repress these mobilizations when they have taken place, including attempts by maquiladora sweatshop workers to form independent unions and to fight for higher wages, by peasants resisting the environmentally disastrous plan to construct a canal through the country, and by mine workers and community activists protesting concessions to transnational mining companies and environmentally damaging development policies.

Meanwhile, corporate tax receipts plummeted from 2010 and on. These corporate tax receipts are the second lowest in Central America, after El Salvador, according to World Bank data. Generous investment incentives and concessions to transnational corporations include 10-year across-the-board tax holidays. Law 480 that authorized the Nicaraguan Canal Development Project granted a Hong-Kong based company “exclusive concessions [that] will last for 50 years from the beginning of operations” and extendable for another 50 years. Nicaragua became a haven for transnational capital precisely because the government generated ideal conditions for the corporate bonanza, including establishing internal labor discipline and stability, and the lowest wages in all of Latin America outside of Cuba. In this regard, the Ortega-Murillo model is more akin to the tripartite corporativism developed by the Partido Revolucionario Institucional (PRI) that long ruled Mexico. In this model, clientalist networks draw in sectors from the popular classes while the leadership of official trade union, peasant associations, and community organizations is integrated into the ruling apparatus and acts to tightly control any independent mobilization from the grassroots.

The model worked in Nicaragua until the economic crisis hit in 2014 and on. The crisis must be placed in the context of the contradictions of capitalist development in Latin America and worldwide in this age of globalization. Along with the rest of Latin America—under Left and Right governments alike—Nicaragua experienced from the 1990s right through into the second half of the 2010s a vast expansion of local and transnational corporate investment in mining operations, logging, agribusiness, tourism, and maquiladora industrial production. As economic difficulties mounted and growth rates dropped starting in the mid-2010s, the government reached agreements with international financial agencies to deepen neoliberal austerity measures, one of which—a cut in pensions and an increase in pension contributions by workers and employers—was the spark that initially triggered the April 2018 protests.

Part II of this two-part analysis looks at the claim that the United States is attempting to overthrow the Ortega-Murillo regime.