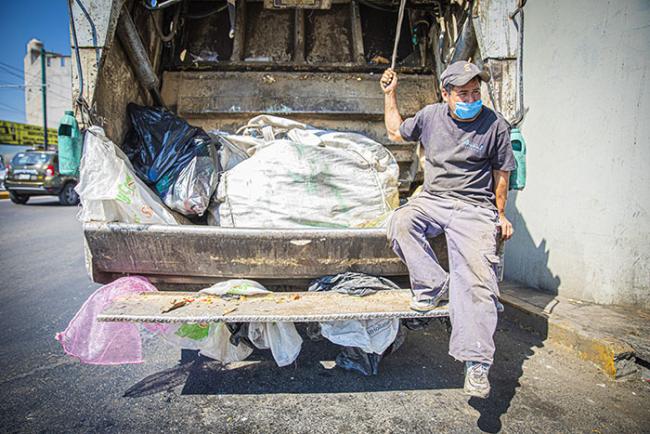 “It’s not anything that we can just sit down and feel sorry for ourselves about, because we have to do this. We just have to get out there and do it, or else we’re going to end up with nothing,” reflected Chicago Crosby, a “canner” and activist in Brooklyn, New York, between the first and second Covid-19 waves in 2020. For her, canning, redeeming cans and bottles, each worth five cents in New York, pays her rent and puts food on the table for her family.

Chicago is not alone in facing this dilemma. Across the globe, there are hundreds of thousands of people who earn a livelihood collecting, sorting, and recycling waste. This army of green workers—often referred to as waste pickers, binners, canners, informal recyclers, voluntarios, recicladores, pepenadores or catadores—make enormous environmental contributions to cities, but they are unrecognized and unprotected.

Now, 16 months after the pandemic forced lockdowns around much of the world and amidst current surges in new cases and deaths, a global study by Women in Informal Employment: Globalizing and Organizing (WIEGO) provides a clearer picture of the pandemic’s devastating impacts on waste pickers like Chicago.

As a waste picker in Mexico City shared, “Since the majority of waste pickers live day to day, if you work then you eat. It’s not like on social media, like ‘stay home.’ If we are without work, then we might as well be left for dead.”

In the months after the pandemic hit, WIEGO found that many of the waste pickers surveyed in nine study cities, across eight countries and four continents, confronted an increase in occupational hazards, saw their daily earnings drop precipitously, and had trouble accessing relief and aid in the rare instances it was made available by their governments.

But the pandemic is also strengthening waste pickers’ resolve to challenge common misperceptions of their work, demand recognition by municipal authorities, and fight for increased social and occupational protections. The experiences of waste pickers in three cities across the Americas—New York, Lima, and Mexico City—demonstrate the resiliency of the sector amidst long-standing exclusion, stigmatization, and new struggles wrought by the pandemic.

An estimated 1.6 billion informal workers, representing more than 60 percent of the world’s workers, provide essential goods and services to local communities, especially in the Global South, and increasingly in the North as well. Informal workers' contributions are numerous and diverse: growing crops and raising livestock, selling goods in markets and public spaces, providing care services to children and the elderly, and sorting and hauling waste.

According to the International Labour Organization, the Covid-19 pandemic was expected to “exacerbate the main vulnerabilities” of informal workers, like economic insecurity and occupational health risks. Not surprisingly, women are particularly vulnerable.

WIEGO’s study confirms many of these predictions. As a sector within the informal economy, waste pickers experienced some of the most acute negative impacts, even though they continued to perform essential sanitation services throughout the pandemic. Usage of personal protective equipment (PPE) including face coverings and gloves was high, but this came at a steep cost for workers: most reported paying for PPE out of pocket, thereby cutting into already decreased earnings.

In Mexico City, for example, waste pickers (trabajadores voluntarios) work alongside formal sanitation workers. The city and formal sanitation worker bosses expected them to continue to do so, even though they receive no labor protections, PPE, or pay from the city. Voluntarios rely on tips from households, which sharply decreased during the pandemic as many individuals declined to go outside to pay workers, and some started to redeem recyclable materials for cash themselves. Consequently, over half of the informal recyclers surveyed by WIEGO in Mexico City had to take on an additional form of income-generation during 2020 to get by.

In Lima, recyclers were denied permission to work during the city’s first, draconian lockdown in 2020 which extended for four months, leaving many workers struggling to meet their households’ basic needs, often depleting assets simply to survive. In their absence, private recycling companies were allowed to continue to operate, allowing some to establish new footholds in communities previously covered by organizations of informal recyclers. 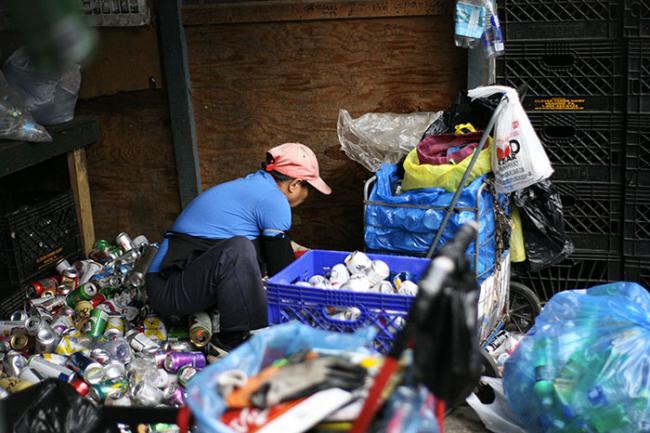 During the second lockdown in 2021, recicladores received work permission from the municipality but under strict conditions. Resource-strapped organizations of workers were required to develop complex, technical safety protocols and finance their own costly safety equipment to be allowed to conduct door to door recycling during the lockdown.

“We’ve read the entire protocol, but it’s for businesses,” noted a waste picker leader from Lima. “We aren’t businessmen, we’re only recyclers at the bottom of the recycling chain. We earn so little.”

In New York, the estimated 8,000 to 10,000 canners occupy a liminal space: they are seldom recognized by municipal officials and rarely, if ever, fined. During the lockdown, canners were never designated as essential workers or given special protections. Canners who wanted to work could and did do so, though, as several canners pointed out, they often weighed the anxiety of not earning an income against the fear of contracting the virus and infecting their families. While most canners did receive stimulus checks from the government, many others could not because of their housing or immigration status. And several noted an uptick in the number of new canners on the street because of the dire economic situation.

In recent years, waste pickers have collectively organized, winning important improvements in several cities and countries. Beginning in the 1980s in Brazil and Colombia, waste pickers fought to highlight their positive environmental and economic contributions and consequently garnered support from different levels of government. Now, in Colombia, national regulations on waste management allow waste pickers’ organizations to register, provide, and be remunerated for public recycling services. In Brazil, the 2010 National Solid Waste Management Policy recognizes the role waste pickers play in integrated solid waste management systems and also institutes the need for cooperation and responsibility among different levels of government and private companies with regard to the treatment and disposal of products. However, while local, national, and global waste picker organizations are growing in size and strength, particularly in the Global South, many waste pickers still face stigmatization and lack of recognition for the environmental services they provide.

The pandemic has demonstrated the importance of membership-based organizations for countering the threats to workers’ livelihoods and promoting well-being and community. Whether it was providing workers with access to information on government relief measures, assisting workers in applying for relief, producing and distributing food rations and personal protective equipment, or providing moral support, worker organizations established effective networks of care and solidarity during a time of unprecedented crisis.

Organizations were also an invaluable source of reliable and accessible information on health and safety protocols. With the amount of (mis)information circulating, worker organizations maintained close contact with members. For María Elena, a waste picker leader in Lima, distributing PPE was fundamental. “We want to abide by the rules, not only because we need to, but because we want to stay safe,” she said.

Along the same lines, distributing PPE “was a moment to build trust” explains Julio, a waste picker leader from Mexico City. In New York, Sure We Can, the city’s only canner organization, was awarded contracts to distribute PPE, provide multilingual health information, and set up vaccine appointments for canners and community members. These were critical services both for Covid-19 prevention and moral support as many canners were experiencing stress and isolation.

Workers’ organizations have also responded to the crisis with new campaigns and advocacy strategies to protect their livelihoods and right to work.

“Getting Covid-19 was our fear, but we had to let go of it, out of [our fear of] hunger too,” noted María Elena. “We just had to go out on the streets with strength and courage to find whatever recyclables we could.”

Worker leaders in Lima pushed for dialogue with local authorities and national ministries to be granted permission to work during periods of heightened restrictions, which they ultimately secured for the sector.

Similarly, in New York, the pandemic has emboldened canners’ resolve to fight a years-long threat of eviction and to speak out against pervasive negative stereotypes. Recently, Josefa, a long-time canner, emphatically declared during a rally at Zuccotti Park, “I am not ashamed to be a canner!”

Membership-based organizations of canners directly challenge the neoliberal logic reliant on low levels of civic engagement, particularly in moments of crisis. From the bottom-up, organizations found innovative ways to connect to workers and problem solve as a survival tactic. These forms of mutual aid can catalyze workers ’capacities for claims-making processes, but also, and equally important, for building a sense of belonging and collective identity.

As Ana from Sure We Can reflected on the organization’s role during the pandemic, “I’m very proud of the support Sure We Can has offered. [...] we need to talk about commitment to becoming stronger and plan to work more on community development...maybe we can deepen our sense of Sure We Can: who we are, why we are here.” 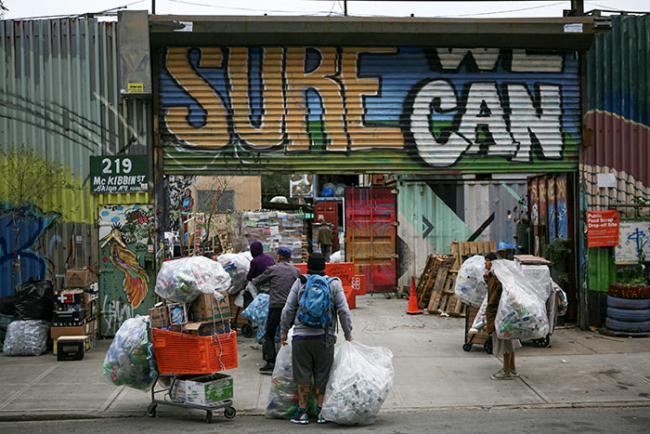 As the examples from Mexico City, Lima, and NYC show, governments have largely failed to support waste pickers during the pandemic, as they have historically. Government responses across these three cities can be understood on a spectrum: on one end, neglect and exclusion, like in Mexico City and New York City, where workers continued working without protections or relief. On the other, punitive measures, like in Lima, where workers were discriminated against in favor of private companies and had to pay the onerous costs for resuming work.

The Covid-19 pandemic provides an opportunity for governments to correct these failures and to re-imagine the role of informal waste pickers in solid waste management systems, moving from exclusion and discrimination to support and integration. No one is better equipped than waste pickers themselves to define what form this integration should take. Waste pickers and their membership-based organizations already have proposals for how their contributions to recycling and solid waste management systems could be enhanced, and their working conditions improved in the process. Although these vary by context, they share common principles:

The pandemic reinforces waste pickers’ and canners’ claims for dignity, decent work, and socio-economic inclusion. As María Elena reminds us: “We don’t want money. Waste pickers are asking for tools [and] for more work.”

Chris Hartmann is Assistant Professor of Public Health at SUNY Old Westbury. His research interests include social medicine, urban health, and environmental justice in Latin America and the U.S. Chris is a board member of Sure We Can.

Ana Carolina Ogando is a Research Associate for WIEGO's Urban Policies Programme. Her research interests include gender, qualitative and participatory methodologies, and participatory governance. She works closely with waste pickers in Brazil on capacity building for membership-based organizations.