The Value of a Volcano 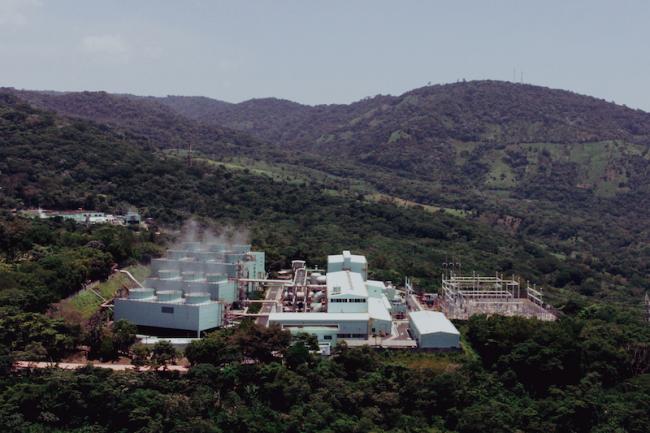 This piece was copublished with El Faro English.

On September 30, a month after the contested rollout of El Salvador’s Bitcoin Law, Nayib Bukele’s government began exploiting volcanic geothermal energy to “mine” Bitcoin. In the morning of October 1, Bukele tweeted that El Salvador had just mined its first bitcoin, but really it was 0.00599179, or roughly $270. It’s all a part of his master plan to shift the country’s economy towards cryptocurrency. The turn to volcanic power as the battery for El Salvador’s Bitcoin transition means that the Salvadoran government will build its own computer farms for validating transactions on the blockchain. The scheme also hopes to tempt cryptominers worldwide to establish operations in El Salvador to cash in on this seemingly inexpensive and limitless energy.

Salvadoran volcanoes are an important reference point for regional identity. These once-fertile landscapes sustained the lifeways of generations of people, with historical uses ranging from plantation agriculture, subsistence production, and animal grazing to local sightseeing and global ecotourism. Now, these volcanic zones are being remade into cryptominer farms, hangars of ASIC computers linked to solve complex mathematical puzzles—cryptography—in service to the Bitcoin system. As if from science fiction, these farms will exploit the country’s “natural capital” to confirm the trades of digital asset speculators. It’s a state-led plan to use massive energy extraction for short-term value generation. All the while, power inequities, unfulfilled energy needs, and instabilities persist in many Salvadoran households.

Bukele’s Bitcoin mining promises lower energy costs for businesses at scale. But in Usulután, where volcanic crypto is being minted, the communities that border the Berlín Geothermal Field will surely be left out of this gold rush. The facilities showcased via the government’s launch video show an energy complex streamlined to power server racks filled with a few single-use miners; nowhere in this video or in any of Bukele’s messaging is this surplus energy even suggested as benefitting Salvadoran households. Some have even called the entire Bitcoin project a stunt.

El Salvador currently imports almost a quarter of its energy, and alongside liquified natural gas, gas-fired plants, and hydropower sources that are unstable due to drought and water scarcity, expanding geothermal indeed might resolve the country’s short-term energy needs. However, for those rural colonias that surround the Ahuachapán Geothermal Power Plant, as well as those near the injection wells planned for Chinameca and San Vicente, the future still looks costly and energy insecure. In the rest of El Salvador, too, communities from city-dwellers to the residents of the smallest towns will likely pay more for less energy on inefficient and shoddy power lines that remain susceptible to failure during even slight storms. Their lives will remain secondary to foreigner-first development, big business, and the needs of the free market.

Using volcanic geothermal is touted as a cheap, clean, and sustainable source of energy in comparison to coal. A local renewable, volcanic geothermal has long been held in high esteem as a strategy for decarbonization and for weaning El Salvador from fossil fuels. The rhetoric, however, is little more than extraction-talk: praising geothermal to cover Bitcoin’s huge carbon and water footprint. In Bukele’s El Salvador, building new energy infrastructure is motivated by desires to increase his hashrate, not to increase electricity access in the cantons and rural neighborhoods that still rely on candlelight, fire, or generators at nighttime. The socioenvironmental and single-minded recklessness of Bukele's hustle towards astronomical energy use to support Bitcoin will undoubtedly create uncertainty for Salvadorans. Like most of Bukele’s politics, the plan is outward-facing, turning over the country’s natural energy source to parachuting miners fleeing previous Bitcoin mining hubs, like China and Iceland, and thirsting for the next cheap energy site to keep the party going. This also means competing with cheap energy in countries fueled by coal. For Salvadorans, the most urgent question is what social and environmental impacts the turn to cryptocurrency will precipitate.

On a yearly basis, solving Bitcoin cryptographic equations consumes the same amount of energy as the whole country of Argentina. That’s nearly 122 terawatt-hours of energy per year in hangars filled with noisy machine miners that run hot all day and night. This excess heat requires other machines to ensure proper functioning, like air conditioners or liquid cooling systems that submerge miners in water—all contributing to water overuse, a warming planet, and depleting ozone. Further, Bitcoin depends on traditional energy sources and pre-existing infrastructure that overuse water, often inefficiently. In a nation where people are fighting against water privatization and misuse, Bitcoin both accelerates and depends on water-intensive energy production. In an already sweltering El Salvador, where the temperature regularly peaks over 90°F, the energy and financial costs of this industry will be enormous. Bukele’s “green” and “clean” move to use volcanoes, while correct from the side of production sustainability, ends up being industry boosterism with a single focus: propping up Bitcoin’s value by digitally strip-mining whichever countries are willing to open themselves up for business.

Fickle bitcoiners appear to be looking for two things in El Salvador: first, proof that Bukele’s experiment will show that cryptocurrency can function via fiat, and second, that cryptomining—whatever its environmental cost and negative long-term consequences—is a net positive for country development. If it modernizes infrastructure and creates jobs, it must be a foolproof roadmap for improving the economies of the poor, the logic goes.

Let’s take as a counterpoint the volcanic island of Iceland, a country that for years has leveraged its volcanic energy for Bitcoin. Iceland has supported the influx of Bitcoin miners seeking to take advantage of cheap energy, set up mining farms, and start businesses that let end users rent computing power for mining purposes, such as the massive cloud-based Genesis Mining. But the differences between the two countries are self-evident. In Iceland, outdoor temperatures are usually cold, requiring little cooling technology to maintain mining rigs running at optimal capacity. Iceland has also enjoyed an energy surplus, while El Salvador can barely cover its domestic use. Also, Iceland’s monthly salaries exceed $3,000, whereas in El Salvador the average is a paltry $350.

Population numbers and other environmental factors vary, too. El Salvador is heavily deforested and has perennially faced intensifying droughts, climate unpredictability, and water shortages. The country sits on a region-wide volcanic arc, crisscrossed by numerous active faults, that makes the country highly vulnerable to repeated earthquakes, all amounting to increased hazard risk. El Salvador has a long list of half-finished, critical infrastructure projects, as well as pending negotiations with water defenders. Yet for Bukele, Bitcoin remains top priority.

But one lesson from Iceland stands out: cryptomining farms gobble up more energy than all Icelandic homes combined, with miner electricity bills running upwards of $1 million per month. The island’s recent dwindling energy surpluses already warn of the limits of building infrastructure solely to satiate Bitcoiner needs. Bitcoin’s sustainability problem is extensive, as e-waste increases due to replacing obsolete miners to maximize cost-efficiency. Thus, even from Scandinavia, as crypto energy needs outpace renewable production, Bitcoin production betrays its own claims of being “green.” Indeed, the sector’s cravings contribute to a future without ice.

Just weeks after El Salvador’s Bitcoin Law came into force, we are seeing rising protests against the Bukelista project. Thousands of Salvadorans have taken to the streets to express dissatisfaction with the president’s rule. So brazen is “dictator Bukele” that we can see glimpses of financial collusion on his Twitter timeline. In other countries, such as in the United States, politicians and capitalists can quietly rig the financial system and manipulate markets against retail investors, and they keep it all relatively hidden. It happens via lobbyists, bargaining, or backdoor dealings. Yet in El Salvador, these conversations now happen in broad daylight. Hundreds of people—from elected members of congress to Bukele fanatics, groups with much overlap—respond to Bukele’s tweets like bitcoiners do to Elon Musk, thanking him for swinging the markets in their favor. This behavior, fueled by memes, reveals how Bitcoin investing is reinforcing ideological allegiance to Bukele, who now acts as much a head of state as hedge fund CEO.

In the end, building out energy infrastructure for the express purpose of cryptomining is senseless, and it offers little for the Salvadoran people. In its best iteration, it will yield a temporary bump in people’s Chivo Wallets, the government’s official Bitcoin wallet, or offer employment to small numbers who will maintain the mining operations—custodians, electricians, computer technicians. At worst, the plan will prove to be public money already wasted, with generational consequences and enormous environmental losses—all for a speculative financial experiment that mainly benefits Bitcoin whales and those who do business with them. Meanwhile, the kitchen lights continue to flicker across El Salvador, where rolling blackouts expose the fragile state of the power grid and even “green” volcanic geothermal will impact nearby groundwater quality.

As neighboring countries decide to cash in their nature to prop up a commodity bubble, the competition among Bitcoin dealers will fuel an energy rush—for geothermal, hydropower, solar, wind, even combustibles—that may trouble Central America’s energy futures. As Bukele told the choir: “It’s just Earth’s energy. And it works 24/7, 365 days a year. It will probably work for the next 500 million years, or whatever, just before the Sun absorbs the Earth, or something.”

Jorge Cuéllar is an interdisciplinary academic focused on Central America and its diasporas. He is Mellon Faculty Fellow (2019-2021) and Assistant Professor (2021-) of Latin American, Latino & Caribbean Studies at Dartmouth College.