Costa Rica: A Democracy on the Brink 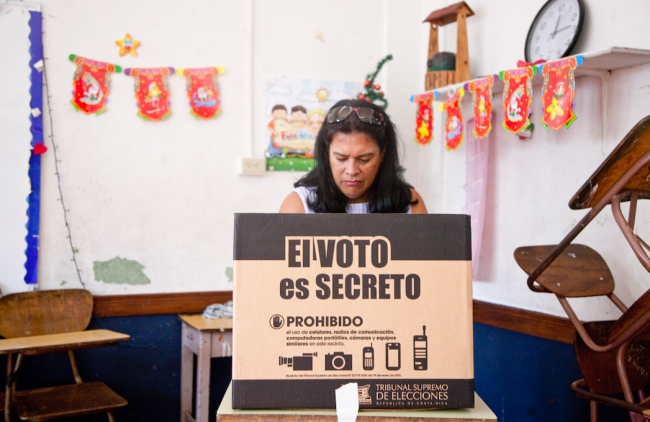 Four years after religious beliefs unexpectedly dominated Costa Rica’s 2018 presidential campaign, voters will cast their ballots for president and 57 members of the Legislative Assembly on February 6, 2022 amid even greater uncertainty. Since the last election, hardline neoliberalism, the Covid-19 pandemic, and the ensuing economic downturn have pushed unemployment to record levels, exacerbated inequality, and brought the country’s long-brewing debt crisis to a head. In 2018 and 2019, protests against a tax reform and an anti-union law shook the country, and in 2020, the government’s plans to strike a loan deal with the International Monetary Fund sparked renewed unrest. On the eve of the 2022 elections, Costa Rica increasingly resembles Chile prior to its historic 2019 social uprising.

The pandemic alone did not bring Costa Rica’s democracy to the brink. Years of neoliberal entrenchment and political reconfigurations have fragmented the electoral playing field, while leftist politicians remain largely disconnected from the working classes. Party disaffiliation has led not only to declining turnouts, but also to increasing electoral volatility. Today, both trends converge in a country deeply fissured by social inequalities and citizen discontent. Against this backdrop, the 2022 elections are likely to favor the powerful business groups, enabling them to maintain the control of the government they achieved in 2018.

Half a Century of Bipartisanship

After the 1948 civil war, two main forces dominated Costa Rican politics: the Partido Liberación Nacional (PLN) and its opponents. Until 1978, the PLN promoted social investment and income redistribution through increasing state intervention to reduce inequalities and contain communism. The PLN encouraged anti-communist union organizing among public employees while persecuting unionism in the private sector, especially communist-led efforts. The opposition to the PLN, made up of political parties that represented the interests of the old coffee oligarchy, opposed state intervention and defended market deregulation. In 1976 these parties organized the Coalición Unidad, which was replaced in 1983 by the Partido Unidad Social Cristiana (PUSC). In elections from 1986 to 1994, the PLN and the PUSC controlled more than 97 percent of the valid votes for president.

In 1982, the PLN came to power amid a deep economic crisis. Pressured by the IMF, the World Bank, and U.S. President Ronald Reagan’s administration, the PLN government began to promote free market policies. Turning to the political right, the party increasingly resembled the PUSC. As a result, the PLN began to face growing opposition from its constituencies, particularly from public sector unions and small and medium urban and rural entrepreneurs. At the same time, the PLN was divided between supporters and detractors of neoliberalism. Although the PLN managed to stay in power in 1986, it was defeated by the PUSC in 1990. Because of these developments, José María Figueres, the PLN presidential candidate in the 1994 elections and son of the late caudillo José Figueres, based his campaign on rejecting neoliberal policies.

Although this proved to be a winning strategy for Figueres, in 1995 he signed a pact with former President Rafael Ángel Calderón, leader of the PUSC, to deepen a neoliberal agenda. When President Figueres responded to widespread popular protests against his economic policies with strong repression, a deep rift formed between the PLN and its supporters. The cost for the PLN was enormous. For the first time, it lost two consecutive presidential elections in 1998 and 2002. The political system was also seriously affected since turnout fell from around 81 percent between 1982 and 1994 to 70 percent in 1998. In the wake of several corruption scandals involving some former PUSC and PLN presidents, the two parties collectively captured only 44.5 percent of valid presidential votes in 2006. In that election, 14 political parties competed for the presidency and turnout decreased again to 65.2 percent.

The Rise of the PAC

The bipartisan crisis produced deep divisions in the PLN and the PUSC and encouraged the formation of new parties, the most important of which was the Partido Acción Ciudadana (PAC). Founded in 2000 by former PLN leaders, the PAC based its campaigns on returning to the PLN’s pre-1982 social democratic policies. Because of this, the PAC has been considered a leftist party, which it is not. In 2002, the PAC captured 26.2 percent in the presidential race, forcing the PLN and PUSC to face off in a run-off vote. It marked the first time in the country’s history that no candidate cleared the 40 percent threshold required to win the election outright in the first round. Then, in 2006, the PAC came close to winning the presidential election but was ultimately defeated by the PLN candidate, former President Óscar Arias. In an attempt to weaken the PAC, the PLN reactivated social investment, stagnant since 1990, and improved public sector salaries. This strategy allowed the PLN to win the 2010 elections with 46.9 percent, six percentage points more than in 2006.

In 2014, worn out after two consecutive terms and new corruption scandals, the PLN lost in a second-round vote to the PAC candidate, Luis Guillermo Solís. Although Solís maintained the PLN style of governing with moderate neoliberal policies and social investment, powerful business interests and their media allies soon launched a systematic campaign to demonize the state and criminalize public employees. Solís refused to promote a regressive tax reform, and in 2016, the government denounced that tax fraud amounted to 8 percent of Gross Domestic Product—nearly $5 billion per year. The business sector felt slighted, and Solís’s approval dipped. At the beginning of 2017, it seemed that the PLN would easily win the 2018 presidential election. But its nomination convention fractured the party into two tendencies: the Arismo camp, led by former President Arias, supported legislator Antonio Álvarez, and the Figuerismo faction backed former President Figueres. Although Álvarez won the nomination, he failed to incorporate the Figueristas into his presidential campaign.

According to the December 2017 polls, the presidential election was set to go to a second round between the PLN and another party. But then everything changed. In January 2018, the Inter-American Court of Human Rights issued a landmark ruling in favor of marriage equality. The decision stemmed from a 2016 request from Costa Rica for guidance on states’ obligations concerning the rights of same-sex couples. In Costa Rica, the Catholic Church and various evangelical denominations responded forcefully to the Court’s opinion, bringing a religious dimension into the electoral campaign for the first time since the end of the 19th century. Capitalizing on the situation, a small evangelical party, the Partido Restauración Nacional (PRN), advanced in the polls. As the PLN and PUSC tried unsuccessfully to compete with the PRN on matters of faith, a large section of the electorate decided to vote for the PAC.

Iván Molina is a professor at the Escuela de Historia and a researcher at the Centro de Investigación en Identidad y Cultura Latinoamericanas at the Universidad de Costa Rica. He is also a science fiction writer and film producer.