Two decades after Argentina’s historic revolt against neoliberalism and in the face of another debt crisis, the experiences of December 2001 offer lasting lessons for a new insurrection. 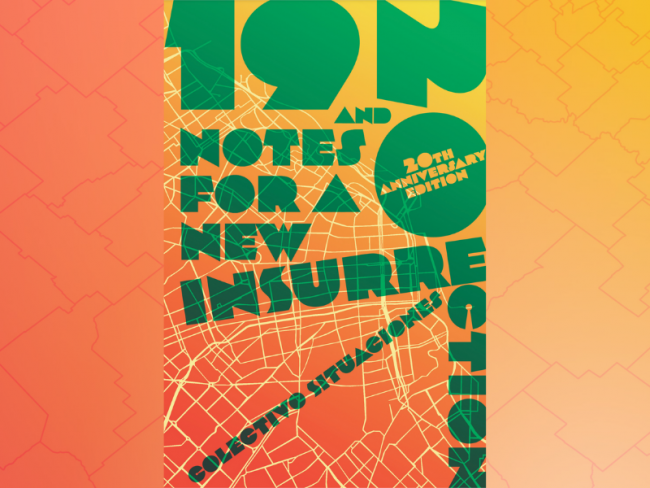 On December 19 and 20, 2001, a popular rebellion erupted in Argentina. With the economy in freefall, people took to the streets with a clear refrain: “Que se vayan todos.” The government soon defaulted on its massive debt, and many new experiments in horizontal organizing and grassroots economic alternatives came to life. Colectivo Situaciones, a radical research collective based in Buenos Aires, sought to document the process.

This is an excerpt from the 20th anniversary edition of Colectivo Situaciones’ 19 and 20.

I first encountered the work of Colectivo Situaciones in the months following the uprising of the 19th and 20th, as their texts began circulating more widely in certain circles of the global justice movement around the world. I encountered their work through collective translations that were freely distributed online, printed out and distributed at events, and discussed in small activist reading groups in North Carolina where I lived at the time or at the counter-summits of the global justice movement. I met members of the Unemployed Workers’ Movement of Solano as they traveled across the United States, visiting college campuses and activist groups, on their way to the protests against the Free Trade Area of the Americas in Miami in 2003. We connected with the texts not only in intellectual or theoretical terms, but through shared embodied experiences, acuerpamiento as we say now, embodying the struggle and putting our bodies on the line together.

These texts were thus essential not only for learning about the revolt that had taken place in Argentina, and the novelty of it, but also for sharing the way of thinking and writing that accompanied it, not only the content of the writing, but the method of analysis-action, that was interwoven in the proposition of research militancy. This method—which perhaps could be crystallized in the Zapatista caminar preguntando—was a fundamental feature of that wave of global struggles. These struggles opened up questions about the revolutionary subject, class composition in the contemporary moment, the form of revolutionary action and organization, the meaning of revolution itself. Around the world new tactics were invented—and linked to strategies and ways of producing analysis—that emphasized a not-knowing, experimentation, something like humility, it formed what could be considered an ethos of that globally connected movement.

In this way, the work of Colectivo Situaciones immediately entered into a constellation of texts, conversations, concepts, that traced a geography from Seattle to Genoa, from Chiapas to Sāo Paulo. It was also directly connected to a number of encounters, such as Enero Autónomo in Argentina, in which activists traveled to participate in assemblies and events with participants of Argentina’s autonomous movements. These events did not aim to replicate the experience of the 19th and 20th in other countries, the forms of organization and movement that gave rise to the revolt or emerged in its wake, because that would have been absurd. Yet, they were based on a fundamental conviction that we can learn from one another, that encounter can open up new questions and paths and can resonate elsewhere.

Thus, while the reading presented in this book of the 19th and 20th is, fundamentally, a situated reading, immanent to the event itself, and drawing on specific genealogies of Argentinean and Latin American Marxist thought, it is also inserted in transnational circuits and conversations, as the events themselves are. This led to a specific way of reading the Argentine uprising, of understanding it as a revolt against neoliberalism, against financialized capital, that both emphasized the singularity of the revolt and connected it to global and particular struggles elsewhere.

Within Argentina, Colectivo Situaciones stands out for their relationship with the 2001 revolt in comparison to others engaged in intellectual and theoretical production. Many intellectuals at the time downplayed the importance of the uprising, criticizing it as “spontaneous,” “unorganized,” and “prepolitical.” In other words, it did not fit into their ideas of what a “revolution” should look like, nor did it confirm their already-existing theories or follow the playbook they had devised. Therefore, much of the uprising remained illegible to those sorts of intellectuals and ways of thinking. Colectivo Situaciones, on the other hand, adopted a different approach. Without claiming to understand the uprising, they knew that it had to nevertheless be participated in, that first and foremost one had to be on the streets, at the barricades and roadblocks, and in the assemblies. Rather than judging the ongoing revolt according to some predetermined criteria, their role as a collective was to dig deeper and follow the threads of an insurgent subjectivity running through it.

This conviction that knowledge is produced in struggle—that struggles, mobilizations, rebellions are productive both in terms of new ways of understanding a situation and through new encounters between subjects and experiences—is a fundamental feature of Colectivo Situaciones’ methods and politics of knowledge. Thus, the militant researcher is immanent to the situation at hand, not an external and neutral observer, but immersed in and of the struggles themselves, following and contributing to that insurgent knowledge produced in struggle. There is another element as well, knowledge is itself productive. Thus, militant research is not characterized by description, limited to the deployment of sociological categories and frames of analysis, but rather productive of new concepts, relations, encounters, and potencia.

Militant-researcher, research militancy: both call into question hegemonic forms of academic and intellectual research and dominant forms of activism and militancy. They call into question the very presumption of a research subject who conducts research, separate from the situation, and the object of research, passively being researched. But nor are they referring to a new form of action-research or participatory research or the like, forms that generally do not challenge the epistemological claims of hegemonic research, that continue depending on the established positions of researcher and participant, and often only lead to more extractive forms of knowledge production. Yet it also challenges dominant forms of activism and militancy, which assume the answers, the necessary tactics and strategies, the required forms of organization, the desired way of living, are already known. Research, in the productive sense described above, is an essential part of politics, not only for understanding our situations, but also to give rise to new encounters and new becomings, and to avoid getting stuck in reified ways of thinking and being in the world.

Fundamentally, research militancy is characterized by that position of immanence to the situation at hand and ultimately, research militancy points to the self-abolition of both the researcher and the militant as independent, fixed subjects. What was seen in the uprising in 2001 was that this practice of militant research was not embodied in a few specific subjects, even if the texts included here have names attached to them. Research militancy was a characteristic of the uprising itself, spread throughout the social field and put in practice in an insurrection that was more about inventing new forms of acting and being together than implementing predefined plans and programs.

What, then, does it mean to read this work 20 years later with the objective of keeping 2001 open as a premise? Those 20 years have seen a profound transformation of the political, social, and economic fields: many of the movements and organizations that emerged with the insurrection were later incorporated into the Kirchnerist governmental project while the alternative economic activities reached a mass level with the expansion of the popular economy, as people individually and collectively invented forms of income generation to survive during the crisis. This was also accompanied by profound shifts in political subjectivities, with the neoliberal government of Mauricio Macri (2015-2019) and a proliferation of microfascisms from below, increased competition, and violence at all levels of society.

Thus, rather than remaining tied to the organizations and forms of mobilization and protest that were practiced in 2001, keeping 2001 opens means engaging in inquiry-action, of searching for and cultivating insurgent subjectivities. It requires immersing ourselves in the struggles of the moment, recognizing the knowledges produced within them and keeping that sense of indeterminacy alive. This perspective shows that, more than anything, it is the feminist movement(s) that has taken up the mantle of the spirit of 2001 in the ways discussed here. Organized territorially, through assemblies, through encounters in different places and at different scales, it is not encapsulated in a single organization or campaign. It is a transformation that occurs simultaneously on the macro and micro, molar and molecular, levels: winning the right to legal, free, and safe abortion for women and people with the capacity to gestate, driving the use of gender-neutral language across society, bringing labor unions to address gender discrimination in the workplace and in the organization itself, winning important legislative victories for non-binary and trans folks, and organizing massive transnational feminist strikes.

The feminist movement has been able to do this through a process of situated investigation, starting from specific bodies that serve as entry points for producing a point of view that allows for understanding the whole. The work of weaving together different situations and struggles—in assemblies where women and trans and non-binary people share their own trajectories to put them in relation with others—produces a political cartography for comprehending the relations between different forms of violence and creates unexpected alliances. It connects households imploded by domestic violence to lands razed by agribusinesses and assassinated campesina and environmental activists, with the wage gap throughout industries and academia and invisibilized care work; it links the violence of austerity and budget cuts to women’s protagonism in popular economies and to financial exploitation through public and private debt. This is the work of militant investigation today: uncovering and cultivating these emerging insurgent subjectivities in order to keep the premise of 2001 open.

Liz Mason-Deese is an independent researcher, translator, and feminist activist. She is a member of the translation collective Territorio de Ideas and also a member of the editorial collective of Viewpoint Magazine and the Counter-Cartographies Collective.