“We Still Have a Lot of Struggles Ahead”: A Conversation with Anielle Franco

For Marielle Franco's sister, the 2018 assassination and impunity surrounding it highlight how racism and misogyny in Brazil treat Black bodies as disposable. 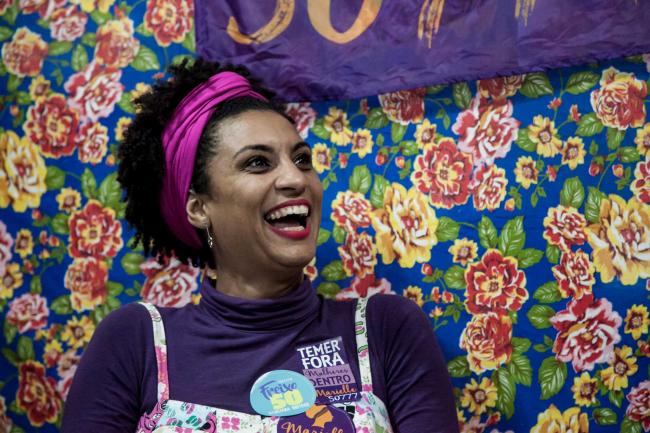 More than three years have passed since Marielle Franco, a Black congresswoman and human rights advocate in the city of Rio de Janeiro, was brutally assassinated in March 2018. Even though we know that it was a retired police officer who killed her, we still do not know who ordered the assassination, and no one has been accused of or prosecuted for the crime.

As Marielle’s sister, Anielle Franco, emphasized in a speech for Minority Rights Group International, “Marielle’s case is not an isolated one.” Rather, it reflects the day-to-day and institutional conditions of racial, gender, and homophobic violence that take the lives of many Black people, women, transgender people, and activists in Brazil. Anielle also highlighted that in 2020, a year defined by the pandemic and the neglectful and genocidal practices of Bolsonaro’s government, the police killed approximately 1,230 people, mostly Black and poor people in the city of Rio de Janeiro.

Anielle is the director of the Marielle Franco Institute, an organization founded on behalf of her family after her sister’s assassination, and she is completing a master’s degree in Ethnic and Race Relations at the Federal University of Rio de Janeiro. In an interview in August, we talked about Marielle Franco, her legacy, the urgency of international solidarity, and the future of the antiracism movement in Brazil. The conversation has been edited for clarity, length, and context. 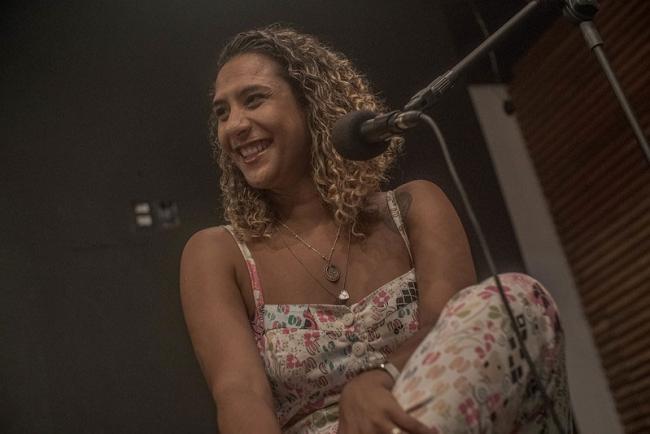 Keisha-Khan Y. Perry: For an international audience, who is Anielle Franco?

Anielle Franco: I’m a professor and journalist. I studied in the United States for 12 years. I went there to play volleyball. I would never have had the possibility of going to another country if it weren’t for the sport. I come from a very humble family. At the time, I received a scholarship to go to play and to study. I studied at Navarro College in Corsicana, Texas, Louisiana Tech University, North Carolina Central University, and finally Florida A&M University.

KYP: What an interesting story!

AF: I often say that my entire education is a result of my upbringing with my mother, sister, and father. They always talked a lot about education in our house; they made me study for hours on end, even when I was younger and didn’t want to. So, I was raised learning the importance of being a committed student, of reading, of knowing how to speak.

My entire intellectual life has been influenced by strong women, women who have always studied, who were the first ones in their families to do so. I was raised with all this strength. And when they killed my sister in 2018, I was forced to know how to talk, to know how to stand up for myself in the face of so much racism and all the hatred we have been going through since Mari’s murder. So, we are here, hanging on to this struggle—intellectual, of solidarity, and antiracism—so that we can continue to carry on Mari’s legacy and memory, but always with our agenda as Black women at the front, as protagonists of our journey.

I’m very proud of my intellectual trajectory, of my trajectories as a teacher, journalist, and writer, that have shaped me and made me the mother and woman I am. And I’m also proud to have come from this generation, at the same time as my sister and my mother, so that I could be this strong woman.

KYP: I want to go back to your education. I knew that you had studied and played volleyball abroad, but I didn’t know that you had attended universities, such as North Carolina and Florida A&M, that are HBCUs (historically Black colleges and universities). Tell me about that experience, of leaving Brazil with its political and racial specificities and going to those universities. How did this have, or not have, an impact on your intellectual development and racial awareness?

AF: It had a really, really strong impact. I left Brazil from a totally white school, in the southern zone of Rio de Janeiro, where I was the only Black student in the classroom. When I got a scholarship to go to the United States, even in Corsicana the college was already very racialized—there were a lot of Black people. That was the first place where I had a Black teacher. It was in Texas. She was my English teacher. I will never forget her, Miss Colin.

I began to understand myself better as a Black woman. It’s obvious that I had grown up with my mother and my sister talking about the fact that we were Black, that we had to fight, because in Brazil it wasn’t easy, and besides being Black, we were faveladas, we were born in the favelas. In essence, going to the United States and HBCUs made all the difference in my antiracist education. It was where I met Angela Davis, where I learned about Patricia Hill Collins, where I learned about Martin Luther King, Malcom X, the whole issue of rap as a form of art and protest, and sport also as a form of protest for Black people. This really shaped me. I often say that in parallel with my upbringing, it was my 12 years in the United States that prepared me for the antiracist struggle, as well as for me to be the woman I am today.

KYP: What do you want people to remember about your sister, Marielle Franco?

AF: If I could choose what I want people to remember about Mari it would be her fiber, her strength to fight. Mari was also raised in a very education-centered way, so she was very studious. I would like people to remember her as a woman who left an abusive relationship, as a woman who fought to raise her daughter as a single mother, who never gave up her dreams, who studied and worked for hours on end, but who was always determined, inside herself, to become a politician and to make a difference, especially for Black women.

She was elected to the city council with 46,000 votes. She was elected democratically by Black people and for Black people. I think this is what is most memorable about Marielle. She was elected talking about minorities that, in fact, are the majority, but she had a very steady fight. She would confront people who were racist in the plenary. She really put herself in this position of fighting.

KYP: At the Marielle Franco Institute, which political and intellectual projects do you understand are the most important to carry on, and why?

AF: One of Mari’s most important projects was one called Espaço Coruja (Owl Space), which was a place where she envisioned having children whose mothers had to work in the evenings. Another project she used to talk about, Livre Parir (Free Birthing), is focused on women’s reproductive freedom and their right to use their bodies to give birth at the time they think is right, because here in Brazil obstetric violence is really cruel to women. More than 50 percent of women are abused when they go to public hospitals in Rio de Janeiro to give birth, because [hospital staff] say we’re strong because we’re Black women. Therefore, Black women can take the pain. Mari had a project to reduce this obstetric violence. Another project of Mari’s that has always been very important to me is the one for women’s access to reporting these kinds of abuses or violence that they have suffered from their partners or parents, but confidentially, and with acceptance.

KYP: You are carrying on these three projects of Marielle’s to preserve her memory and her legacy. Has the Institute, in any way, expanded her legacy? Or what do you understand has to be Marielle’s legacy, in terms of other projects?

AF: In 2020 we had the first elections after her assassination. We created an agenda, the Agenda Marielle Franco, as part of the Plataforma Antirracista nas Eleições (Antiracist Platform for Elections). In this platform we put all the work she had done in politics over 15 months. We managed to get many of the people who were candidates that year to talk about and commit to these projects as well. I think this project was one of the greatest victories we had in 2020.

KYP: In August 2021, we marked 41 months without answers, without justice, and without knowing who ordered the killing of Marielle Franco. How are you, your family, and the Institute dealing with this injustice?

AF: It’s always painful. It’s always very concerning when we don’t have answers. We are in a country that, unfortunately, is very well known for committing crimes with impunity. We understand the importance of Marielle, of this crime being solved, but at the same time, there are several people whose murderers have never been discovered. It’s not easy. We miss her a lot.

KYP: In your perspective, what does this impunity reveal about Brazilian society, or about justice in Brazil?

AF: It’s about how we live in a racist, misogynist society, a society that understands that our Black bodies are disposable. I think the crime against her says a lot about this, because she was a congresswoman and people thought they could just kill her, just like that, and get away with it.

KYP: Disposable bodies, yes. What do you think is next in the struggle for racial justice in Brazil? How do you imagine your future and the future of the Institute in this struggle?

AF: We still have a lot of struggles ahead. I think this is only the beginning. I think we have been able to act, to guide and influence, both nationally and internationally. It has been really rewarding, but things are moving slowly. We still require years of reparations for everything that has been happening in Brazil toward Black people, especially. I hope that the Institute continues to grow, to get strong, and that it keeps on leading, as we are doing today, within social movements—leading so that we can be protagonists of our lives and so that we don’t need to wait for other Black women to be murdered for us to talk about them.

KYP: What can the global community do specifically, in terms of solidarity efforts?

AF: I think they can follow these movements' work, publicize it. Whoever is able to, obviously, should also contribute. I think the more visibility we have, be it in Brazil or internationally, the better, because we understand that we can’t achieve anything by ourselves.

Keisha-Khan Y. Perry is the Presidential Penn Compact Associate Professor of Africana Studies at the University of Pennsylvania, where she researches social movements led by Black women in Latin America and the Caribbean. She is originally Jamaican and has lived in the United States for the past 30 years. She wrote the book Black Women Against the Land Grab: The Fight for Racial Justice in Brazil, to be published in Portuguese this year.

Joyce Silva Fernandes is a PhD student in the Department of Portuguese and Brazilian Studies at Brown University where she has focused her studies on African and African diasporic literature in Portuguese.