Broadcasting from Bolivia, Aymara Voices Will Not Be Silenced 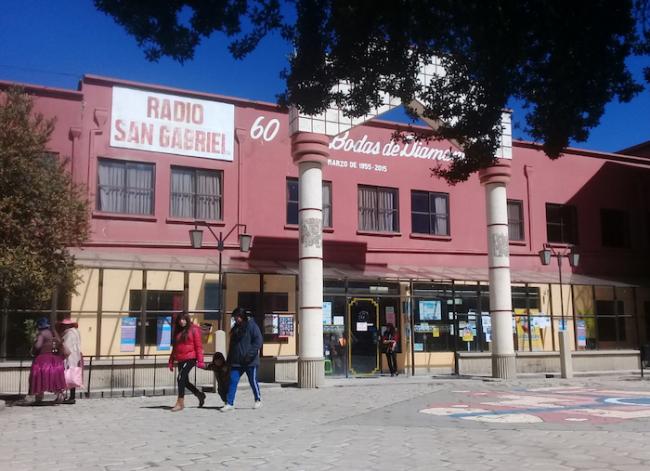 Radio San Gabriel, an Aymara-language radio station based in El Alto, Bolivia, has been a feature of life on the altiplano longer than the city has existed. The reach of the station—known affectionately as “the voice of the Aymara people”—traverses the heart of Aymara-speaking territory in the Andes, spanning the 20 provinces of Bolivia’s La Paz department and sections of highland Chile and Peru. In bustling El Alto, the world’s highest city and a nexus of Indigeneity and resistance in the Andes, Radio San Gabriel is arguably the soundtrack of the Aymara pueblo.

San Gabriel was founded in 1955 in the altiplano town of Peñas on the heels of the Bolivian Revolution. Established by a Maryknoll parish priest, the Radio’s initial aims were to educate and evangelize the Aymara population. In the years leading up to the 1952 Revolution, emergent radio platforms in highland mining communities intersected with communist political currents, making community radio an important source of information, literacy, and militancy in rural Bolivian society. Highland Indigenous communities allied with miners’ unions, setting in motion the tremendously reorganizing forces of the Bolivian Revolution. While Aymara and Quechua campesinos were central protagonists in the uprising, their role was cast in class, not ethnic, terms.

In the wake of the Revolution, both the Catholic Church and the Bolivian state sought to “modernize” and integrate the Indigenous population, largely through Spanish literacy. With that project in mind, Radio San Gabriel was founded in the heart of Aymara territory. Its illustrious inauguration involved a missive from Pope Pio XII, the presence of the first lady, and 8,000 Aymara guests.

While the name San Gabriel—a messenger of God—bestowed celestial authority on the station early on, in the ensuing decades that authority would increasingly be derived from the collective moral influence of Aymara nationalism, as scholar Karl Swinehart has observed. The Radio’s evolution continued to mirror dynamics of struggle and identity formation across the altiplano and greater Andean region. By the mid- 1960s, the emancipatory fervor of the Revolution had given way to a series of repressive regimes that targeted unions and sought to reassert control over the countryside. The Aymara-centered Katarista movement, drawing its name from the 18th-century anti-colonial leader Túpac Katari, emerged in the 1970s as a radical response to the continued exploitation and cultural oppression of Indigenous populations. With airwaves traversing the geopolitical landscape of that struggle, San Gabriel became a bullhorn for the movement.

San Gabriel’s increasing alignment with Aymara language and culture coalesced with the embrace of liberation theology in some sectors of the Catholic Church in Latin America, prompting a shift away from its assimilationist stance. This opening allowed the Radio to deepen its focus on linguistic purism. To this day, the Radio promotes an “unadulterated” form of Aymara that is essentially decolonial in nature. Concurrently, the station made popular education a central pillar of its work, developing a number of adult literacy and livelihood training programs to better meet the needs of its listeners. In 1976, Maryknoll relinquished management of the Radio, passing it off to a Catholic teaching congregation that manages the station to this day. While San Gabriel continues to offer Christian programming, that content has taken a back seat to its focus on Aymara language, culture, and livelihood development. 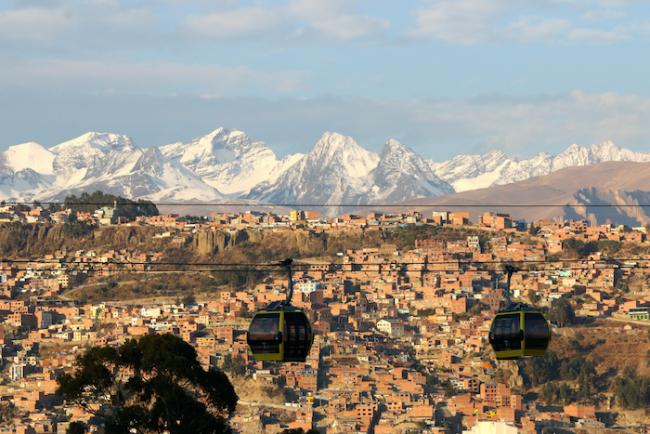 Over the years, San Gabriel has been a steady companion to Aymara communities in Bolivia as demographics have shifted increasingly to urban spaces. In 1945, the first neighborhoods were founded in El Alto, setting the stage for subsequent waves of migration that would definitively flip the rural-urban divide. In 1980, Bolivia’s urban population was just under 40 percent, but as of 2019 it was nearly 70 percent. Despite its precipitous growth, El Alto wasn’t officially consolidated as a city until March 1985. In 2001, Radio San Gabriel shifted its headquarters to the Aymara capital, where it continues to serve as a bridge between the city and the greater altiplano. Today, El Alto has close to a million residents, making it Bolivia’s second largest city, and 82 percent of that population identifies as Indigenous.

Amid urbanization paired with a complete absence of the state, the voice of Radio San Gabriel became a unifying and democratizing force. As Santos Colque Quelca, San Gabriel’s FM director, told me, in moments of sociopolitical crisis Alteños look to the station as a strategic site of negotiation and resistance, both as a trusted source of information and a physical arena for dialogue. In turn, Aymara residents protect the Radio from real and perceived threats. In 2019, after a civilian and police-backed coup overthrew Indigenous longtime President Evo Morales, local residents held a vigil outside the Radio’s headquarters, sending a clear message: our voices will not be silenced.

Roughly 2.5 million people in the Andes speak Aymara today, spread between Bolivia, Peru, Chile, and Argentina. About three-quarters of that population reside in Bolivia, where El Alto serves as a nucleus of Aymara commerce, identity, and collective memory. As an oral language and tradition structured around the Andean concept of ayni, or reciprocity, radio provides an ideal medium for the expression, preservation, and celebration of Aymara culture. When coupled with vocational training, adult literacy, and content centered on Aymara pride, San Gabriel also signifies a steady, enduring front against the continued legacy of colonialism.

At 33 years old, FM director Santos is a product of the migratory and politicizing forces that have shaped El Alto in recent decades. He is working to bring a youthful voice to Indigenous radio, managing the station’s Spanish-language content. While the station is no longer Aymara only, Santos is optimistic about the future of Indigenous-language media. The key, he says, lies in the fighting spirit of the Aymara people. “The [Aymara] people are very receptive, very affectionate too,” he told me. “But when it comes to la lucha, the people of El Alto have tremendous tenacity. When the potatoes burn, if I can use that phrase, Alteños come together.” Our conversation has been edited for length and clarity.

Julianne Chandler: Can you tell me a little about yourself—your background in radio, how you arrived at Radio San Gabriel, and some of the work of the Radio?

In terms of media, San Gabriel runs two radio stations. One is the AM channel, which runs programming completely in Aymara and is basically the mainstay of what we do. The goal of the FM is to bring programming principally to the population of La Paz, El Alto, and some municipalities neighboring the metropolitan axis. The objective of the AM station is to reach the 20 provinces of La Paz, covering almost the entire department. Our current director is Brother Felipe Ampuero Montes.

Radio San Gabriel is not only a form of media, and I think this is important. It’s a whole conglomerate of initiatives. For example, we work with teachers and professors whose mission is to offer secondary education courses towards a high school diploma in different provinces. So they grab a truck—or they did before the pandemic—and a group of teachers travel to the distant provinces once a month. One of the teaching programs is called SAAD—the Self-Education Distance System. Its main goal is to support people who for different reasons have not been able to finish high school. It’s pretty remarkable to see graduation ceremonies for people who are 30, 40, 50, even 60 years old and finally getting their diplomas.

Read the rest of this interview here, available open access for a limited time.

Julianne Chandler is a writer and educator based out of Cochabamba, Bolivia. Currently, she is a MA candidate in Latin American and Caribbean Studies and Global Journalism at New York University. Her research interests include autonomous feminist articulation in the Andes, defense of territory, and Indigenous cultural affirmation.