In Tapachula, Thousands of Haitian Migrants Wait to Be Resettled

Migrants caught in limbo in southern Mexico must contend with dismal living conditions, precarious status, and a void of official information surrounding their fate. 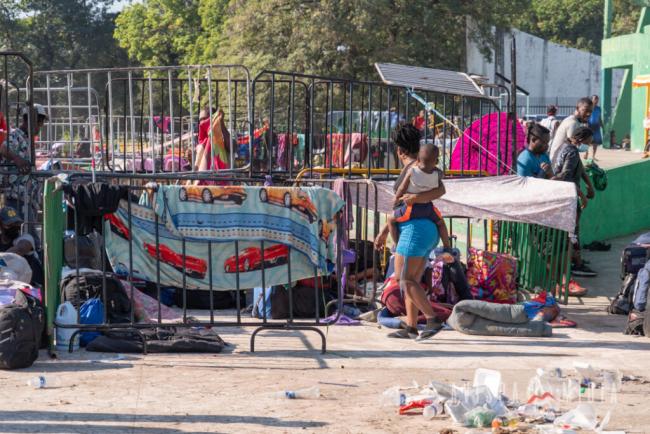 This piece was originally published in Spanish by Avispa Midia. Translated by Néstor David Pastor.

“Don’t abandon us here,” a man says angrily as his voice breaks. He is surrounded by about 3,000 Haitian adults and children who have traveled from South America to southern Mexico and now seek refuge from the harsh sun in the city of Tapachula’s Olympic Stadium.

The scene is disheartening. Migrants have no basic services and live in cramped conditions. There is no access to clean water, food, or health care. The campsite has only a few portable toilets. A foul stench emanates from neglect. The trash has piled up—enough to cover the ground. Only by organizing themselves are migrants able to meet some of their needs.

Everyone waits in line, enduring high temperatures, hunger, and sickness with the hope of boarding a bus that will allow them to leave Tapachula. The border city has become a prison for migrants who, despite requesting asylum, have not yet received a response from immigration agencies. To make matters worse, the lack of information from authorities has created a chaotic situation. Thousands desperately look for a way to continue their journey.

“We are sleeping on shit,” a woman angrily tells us. She mentions the worms in the garbage and the places where migrants rest. “A lot of people have the flu, fever, there is no light. We are sleeping in garbage,” says another migrant, emphasizing the unsanitary conditions in which thousands find themselves.

“The main thing is children with fever, flu, cough, some problems with skin allergies...People are here waiting for hours, days under the sun. They don’t eat well or drink enough water. They are dehydrated and with the heat, and we’ve seen children with temperatures over 102 degrees,” she says.

According to Karen Martínez, coordinator for the Office of Jesuit Refugee Services (JRS), due to the Immigration Regulation Office’s inability to expedite refugee requests at the southern border, news unofficially spread at the end of November that the Tapachula division was transferring migrants to other Mexican states.

In roughly 10 minutes, 10,000 people flooded the office. Immigration authorities “upon being overrun, sent them to the stadium to form a line, and there they were going to tell them where they were going,” explains Martínez, who believes that this response led to the chaotic situation that ensued.

“Truthfully, it’s been very sad to see the conditions in which people find themselves. The stadium is full, which has likely caused discomfort for many, but it’s the only way to put pressure on the National Immigration Institute (INM),” she says.

Only then, on November 28, did the INM publish a statement specifying that in order to reduce the massive concentration of foreigners in Chiapas, the institution would expedite “the transfer of asylum requests to other entities, with the goal of issuing and delivering humanitarian visas in a fast and orderly fashion.”

“[Immigration authorities] never said anything, and it was all unverified information from people who had been moved during those transfers; we know nothing else about [them],” explains Martínez. This is in contrast to the official version that speaks of a safe and orderly transfer to other Mexican states.

“Immigration comes one minute, says one thing, then later, they say another,” people at the stadium reported. This coincides with the stance of JRS, which maintains the situation has been worsened by misinformation and the enforcement of immigration policies that are geared toward containment, rather than providing clarity.

According to data from the Mexican Commission for Refugee Assistance (COMAR), between January and November 2021, the state of Chiapas alone received almost 50,000 asylum requests for a total of 90,038 foreigners.

Of all the applications registered at Mexico’s northern and southern borders, 38 percent are Haitian nationals, which makes the Caribbean nation first in terms of the number of asylum requests in progress.

The majority of them, however, are not coming from their homeland. Instead, they have been traveling for months or even years from South American countries like Chile, Brazil, and Argentina. According to Martínez of JRS, the fact that Haitians continue to migrate stems from the xenophobia and anti-immigrant backlash they face throughout the continent—just as they do in Mexico.

For Martínez, the Haitian population has been the most vulnerable in Tapachula because they have no other options to legalize their immigration status besides requesting asylum. She points out that COMAR’s handling of this process has been slow, which has stranded people in Tapachula without documentation proving their status that would allow them to travel to other parts of Mexico.

“The law says that everyone who is subject to the application process is eligible for residency. These individuals apply for a residency card for humanitarian reasons. The INM issues this card, which proves that you are able to transit through Mexico for a year. It also means that you won’t have any problem regularly moving within the country,” she explains.

Immigration offices, however, do not have appointments available until March and April of 2022. Migrants who find themselves in Tapachula against their will are still without work, food, or homes, essentially living on the street, waiting long periods for a response from immigration authorities.

“Faced with this situation, new caravans leaving from Tapachula have started to pop up...These so-called caravans enter into direct confrontation with the National Guard and the INM. Serious human rights violations against migrants have been proven,” says Martínez.

“We’re miserable, we’re not animals,” another migrant tells us when we ask about their situation. “Immigration has to get us out of here because if we stay, we’ll die of hunger, sick and dehydrated,” she adds. Meanwhile, the majority of those we interviewed agree that there is a lack of information from immigration officials, who are sometimes seen in the vicinity but avoid questions.

According to migrants’ testimonies, the INM is inefficient. Even though it promised to send between 50 and 70 buses to transport thousands of migrants, only three were seen over the course of a week. Benítez has heard testimonies from migrants that the buses that did depart went to San Luis Potosí, Guadalajara, and Puebla. 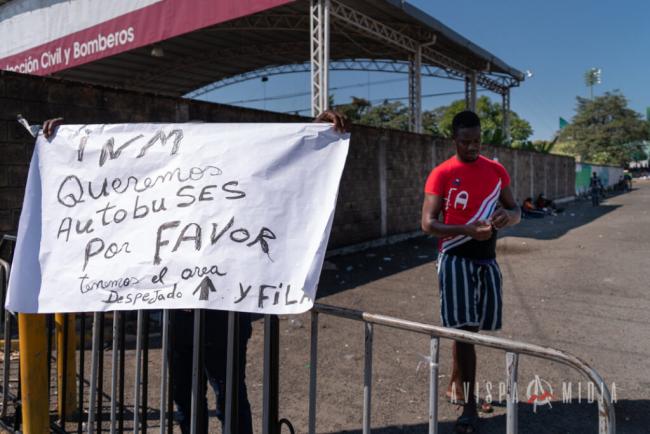 Despite the lack of official information from immigration authorities concerning their destinations, Martínez more or less confirmed the transfers. “Yes, they have told us that they arrived in Querétaro and there were people who shared with us that they had been left in Veracruz and that afterwards…the response [to their residency requests] was ‘better to keep moving, here there is no way to gain residency, better to look along the way,’” she says with concern. It remains unclear where the resettlements are taking place.

“It’s a situation that got out of control and they are looking for a way to close these routes because in reality, up until now, I’ve had reliable information on who these people are, where they go, where they are dropped off, what their legal status is. But everything is very much up in the air. So the truth is that it’s very worrisome because safety and individual rights are not guaranteed,” Martínez says.

Martínez underscores how this could lead to another problem. As with the 2018 caravans, many migrants could “get lost” in the refugee process “and later they are sent to the southern border again to verify their migration status at the special request of COMAR.”

Amid increased migrant numbers  in Tapachula, the need for basic sustenance is growing, as are issues like xenophobia, according to Martínez. For her, the government’s militarized immigration policies contribute to the repression against migrants.

An example of this is INM’s discourse, which seeks to blame migrants for violent actions that make it difficult to carry out procedures. In a statement at the end of November, the immigration authority stated: "Groups of people were detected who, on the one hand, armed with stones and sticks, block avenues and streets and prevent the arrival of buses, and others who, at the same time, resort to violent actions to demand that they leave the same day.”

In contrast, after accompanying various caravans, Martínez points out that INM officials have used force against migrants. Migrants, in turn, are just looking to defend themselves. “This is a consequence of what is happening in the region, people have heard ‘no’ since leaving their country…There hasn’t been communication, dialogue, or listening,” she says.

There are also multiple reports from migrants who have denounced extortion attempts by immigration authorities. However, due to the already precarious situation and the fear of reprisals, no one has filed a formal complaint.

For Martínez, another case that shows how the policies of the Mexican state do not guarantee migrants’ fundamental rights is the truck accident on the Tuxtla Gutiérrez-Chiapa de Corzo highway that, as of December 10, had a death toll of 55—all migrants from the Quiché region in Guatemala.

“We are truly in solidarity with the families and their losses, and the anguish in knowing the fate of their loved ones. This is reflected in a militarized, repressive, and violent immigrant policy, which has forced the people who move through southern Mexico to choose these increasingly dangerous options and routes that put their lives and dignity at risk,” says Martínez.

For her part, Benítez emphasizes the importance of raising awareness of the migrant crisis happening in Tapachula. “It was incredible to arrive here on Monday and see so many people and not see anyone helping them, to see so many with basic needs: from medical attention to water, food… There is a lot of need and we have to be human and show solidarity.”

Aldo Santiago is a documentary filmmaker and independent journalist. He is also an editor and correspondent for Avispa Midia.

Santiago Navarro F is an economist, journalist, photographer, and documentary filmmaker. He is co-founder of the investigative journalism portal Avispa Midia.

Editor’s note: This English translation has been lightly edited for length. See the original Spanish version at Avispa Midia.