Gutiérrez, who died after a violent attack following MAS’s election victory, was a passionate and charismatic trade unionist. 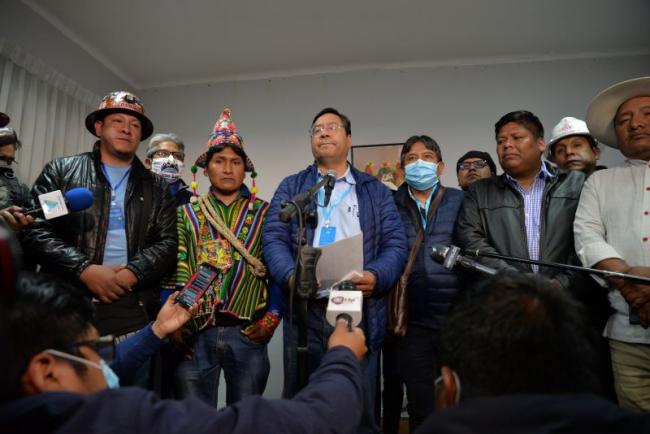 Less than a week after the electoral victory of Movimiento al Socialismo (Movement Towards Socialism, MAS) in the presidential elections, the head of the Federación Sindical de los Trabajadores Mineros de Bolivia (Federation of Bolivian Mine Workers, FSTMB), Orlando Gutiérrez, was attacked in La Paz. It is rumored that in the October 22 attack, he suffered a blow to the left side of his head, which would prove fatal.

Although the exact cause of death has yet to be confirmed, the FSTMB maintains that Gutiérrez suffered a “attack and cruel murder executed by the fascist right.” The loss of Orlando is felt keenly across Bolivia and beyond. Hailing from the mining center of Colquiri in the department of La Paz, Orlando had climbed quickly through the ranks of the Bolivian labor movement. He became the head of the FSTMB in 2015, little over a year after his thirtieth birthday.

I met Orlando Gutiérrez at a national meeting, known as an ampliado, of the Central Obrera Bolivia (Bolivian Workers’ Central, COB) in June 2016. This was around the time of the general strikes following the closure of the state textile firm, ENATEX, in May 2016. The firm had been nationalized in 2012. The shutdown of ENATEX put 900 people out of work. As I have noted elsewhere, the factory closure sparked a massive debate inside the labor movement, dividing the COB along the lines of those advocating for trade union independence and those who, given its historic weakness, argued that the COB needed to be “looked after” by its leaders.

My friend from the Railway Workers, Severiche Brosque, snuck me into the COB’s national meeting. After Orlando gave a fiery speech, I managed to catch up with him at the end of the Congress. He was marching out of the meeting, followed by a throng of miners, and exuded a presence as if he was under a spotlight. As I asked whether I could come and interview him, I saw a look of curiosity spread across his face – what on earth was this choco, an affectionate way of saying white person, doing here?

He agreed, and I headed to the offices of the FSTMB off the Prado in the center of La Paz later that week. When I arrived Orlando was, of course, otherwise engaged, but he told me to wait. One of his compañeros went to buy some of the famous tucumanas del prado, a deep-fried Bolivian pasty, for their meeting. As the man was leaving, Orlando shouted after him to “Get one for the choco too!”

After eating my tucumana and waiting for several hours (one of the features of research with social organizations in Bolivia), Orlando finally invited me in for an unforgettable interview. He had so much energy and passion, was a spellbinding orator and a fiercely intelligent man. Despite my disagreements with some of his politics, it was impossible not to like him. He was a generous spirited man who wanted to do the best for this mining family.

Historically in Bolivian labor politics are there three tactics: strikes, marches, and hunger strikes. The factory workers at ENATEX were on hunger strike at the time of our interview, so I was curious to know what Orlando made of these tactics of working-class struggle.

The account Orlando gave of why the miners march remains the most evocative and powerful I have heard. He described the long, energy-sapping marches over weeks, the sleeping in storm drains along the intercity highways, huddled together with other miners for shared body heat. The weeks of hardship, Orlando said, are gradually transformed into a fury, rabia, against those who are the reason you are marching. And so, when you arrive in La Paz and head to negotiations, this fury, coupled with an intense desire to go home to your warm bed, give you the steel and aggression at the negotiation table needed for short and productive discussions. Marching, Orlando reasoned, gave the miners the internal fire needed to take a stand and get what they wanted out of talks with the government. I walked out of my interview with Orlando in awe of the miners and their leader, Orlando himself, and with a newfound respect for Bolivian social movements. 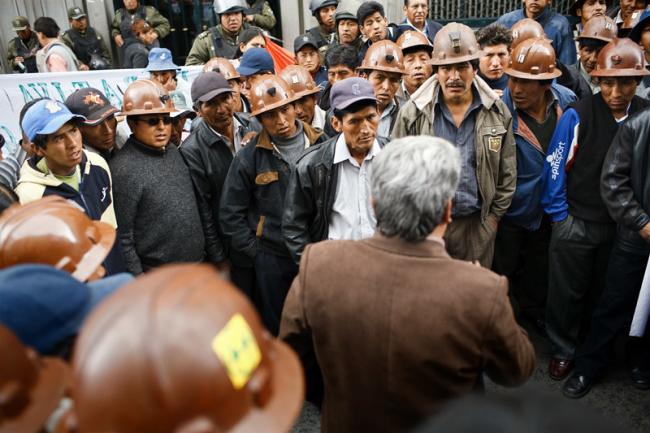 A few weeks later, during one of the general strikes of June-July 2016, I marched with the miners. This was the bread and butter of my research: going to the start of marches, starting conversations with people and asking whether I could accompany them. The miners, of course, obliged. The miners I met on my travels across the Bolivian labor movement were always generous and welcoming, albeit after asking the obligatory question about whether I was CIA or not.

We marched down from the highland plateau into the mountain bowl in which La Paz is situated, a journey punctuated with tiros (throws) of dynamite that echoed around the mountains and announced the miners’ arrival. By the time we reached the end of our route, I had been given a miner’s helmet to wear and been promoted to the head of our section. The miners, looking at my 6’3” figure and joked:

Hey, look! We have replaced Orlando with the choco. We have a new leader now.

The miners laughed and they began to shout down the line to catch Orlando’s attention. He was some 20 meters ahead leading the march. He turned around and came back, clapped me on the shoulder and gave me a hug. As he did so, I noticed that he was almost as tall as me, quite something in a country where most people stand to my shoulders. You can see why the miners thought of him as a kind of superman.

Orlando’s physical presence was more than his build. He had an energy that made him a natural leader. My time marching with the miners showed me the respect he wielded, but also the bonds of friendship and brotherhood he had with the other miners, the ability to laugh and joke with people who evidently viewed him as a brother–albeit a big brother at that!

These fleeting meetings with Orlando left a big impression on me. I always thought he was going to be the future executive secretary of the COB, and so when I learned that he was slated as the next Minister of Mining, I was not surprised. There was more than a little of Juan Lechín, the leader of the COB during the 1952 revolution and Minister of Mining in the preceding Movimiento Nacionalista Revolucionario (National Revolutionary Movement, MNR) government, in him.

Orlando’s death in the wake of what appears to be a violent, politically motivated attack comes as a great shock and I write my recollections with great sadness. Orlando was a great man and worked tirelessly for the people he represented. Rightly or wrongly, he believed the MAS was on the road to socialism and the emancipation of him and his miner brothers.

Bolivian politics has a long history of radicalism from both Indigenous and labor movements, movements looking to transform Bolivia. Under the government of Morales, these groups were split between those who believed the MAS was undertaking this task, and those who saw the MAS as more of the same. The Bolivian Right, of course, have always sought to defend their historic racial and class privileges.

Orlando sat on the side of the MAS. For this belief, he paid the ultimate price. With the election already won, his death was futile. Orlando’s death is a reminder that there are still many in Bolivia who feel a MAS victory threatens their interests and privileges and are willing to act with violence.

Sometimes history reveals itself in a Manichean form. Orlando was one of the good guys. Rest in power compañero.

Angus McNelly is based at Queen Mary University of London and is currently writing a book about the politics of crisis in Bolivia. His published academic work addresses the political economy of development, social movements and progressive governments through the lens of Bolivia. In addition to NACLA, Angus has written about Bolivian politics for The Conversation, Jacobin, World Politics Review.