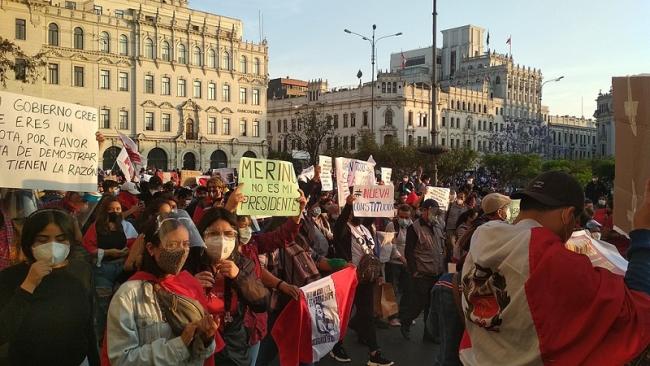 In a meteoric rise from the margins of Peru’s crowded presidential race, elementary school teacher and union activist Pedro Castillo won an unexpected lead in the country’s first-round election on April 11. With almost 20 percent of the vote, he has now secured a spot in the second round, where he is expected to face off against conservative politician Keiko Fujimori. Fujimori, daughter of dictator and convicted human rights violator Alberto Fujimori, is a free market defender accused of leading a criminal organization within her party, Fuerza Popular.

Voters cast their ballots in the bicentennial election in the midst of the daunting effects of the pandemic, a major economic crisis, and ongoing political instability that has rocked the country for (at least) three years. In the 2016 elections, neoliberal technocrat Pedro Pablo Kuczynski (PPK) defeated Keiko Fujimori by a scarce margin. In Congress, fujimoristas—the largest bloc—focused on ousting the president to force early elections. Despite obscure negotiations that included a presidential pardon of Alberto Fujimori, PPK resigned in March 2018, handing power to vice president Martín Vizcarra, who undertook valiant anti-corruption efforts and substantial political reform proposals.

Still threatened, fujimoristas forced Vizcarra to resign in what was widely condemned as a “constitutional coup.” The move ignited a major social revolt, and the interim government headed by congressional president Manuel Merino fell in five days. Franscisco Sagasti, member of the center-technocratic Partido Morado, stepped in as the fourth president in less than three years.

Sagasti was tasked with overseeing one of the most challenging elections for any country in the region. With a baffling number of candidates—18 in total—the 2021 presidential ballot included convicted felons, presumed money launderers, xenophobes, a fascist billionaire, an overrated and outdated economist, a retired mediocre footballer, a person accused of murdering a journalist, and other colorful figures. The vast majority of candidates represented the continuation of the neoliberal economic model that has been responsible for decades of meager financial performance and unequal growth. 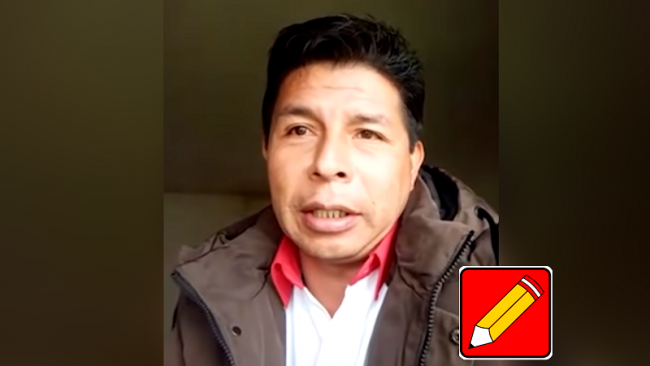 Three candidates, however, proposed alternatives. Anthropologist Verónika Mendoza, leading Juntos por el Perú, a coalition of a left-leaning progressive intelligentsia primarily of middle-class origin, had been polling in a dead heat with four other candidates a week before the election. Mendoza placed third in the 2016 presidential race. Another leftist contender was sociologist and former priest Marco Arana, representing the Frente Amplio, a conglomerate of diverse leftist factions with marginal support. Finally, Pedro Castillo, a teacher and union leader with wide reception outside Lima and an open critic of neoliberalism, ran with the Peru Libre party. His emergence as the champion of the provincial left is baffling for both internal and external observers. Who really is Pedro Castillo?

Castillo encapsulates the discontent of a wide margin of Peruvian populations—particularly the disenfranchised regions outside Lima—against traditional political classes and the perpetuation of a deteriorated, alienating economic model. International mainstream media has described him as “far-left” candidate. Yet far from being a “comrade” who will champion leftist demands, Castillo is the new face of an anti-system impulse. This same kind of response has empowered different political projects in Peru’s history, particularly throughout the past century before the age of neoliberal hegemony, from military dictatorships of different tones to the bureaucratic authoritarianism of Alberto Fujimori (1990-2000).

Castillo broke into the national political landscape claiming the need for radical nationalization of resources, a major constitutional transformation that dismantles the legal framework of neoliberalism. He also proposed a handful of emblematic measures, including the release from prison of Antauro Humala, a retired army officer and leader of an ethnonationalist party convicted in 2009 for attempting a military coup against President Alejandro Toledo in 2005.

Born in Chota, Cajamarca, one of the contemporary epicenters of socioeconomic conflicts in Peru, Castillo served as a rondero—a peasant militia member—during his youth before becoming a teacher and a regional union leader. Seemingly radical, Castillo’s life charts a congruent trajectory of conservative, politically dogmatic, patriarchal anti-establishment positions. Only in a neoliberal system that outcasts any form of market dissent as radical would a figure like Castillo acquire a role as a leftist. An advocate of ethnonationalism, paramilitarism, and statization, there is virtually no point in Castillo’s agenda—past and present—that offers a lingering sense of emancipation.

Castillo’s political agenda, Peru Libre’s ideario y programa (ideals and program), appeals to the idea of the marginalization of the Perú profundo, the deep Peru, that once catapulted authoritarianisms of different magnitudes, including the rise of Sendero Luminoso (Shining Path) guerrilla group as the foremost dystopian interpretation of Marxism, Leninism, and the Peruvian reality. Chief among his proposals, Castillo appreciates the value of militarizing the youth for the sake of morale, both individually and collectively. He also promotes the need for a cultural, revolution-like experience, enforcing standards of cultural consumption that would enhance the buenas costumbres (decent habits) of Peruvian society. He also pitches the need for having civil society involved in their own armed defense for the sake of law and order and in the “socialist administration” of justice.

Chapter 16 of his program, anachronistically titled La mujer socialista (the socialist woman) presents a deeply patriarchal, gender-normative view of society disguised under seemingly liberating language. Conversely, there is no mention of the need for reforming the structure of land ownership and conducting a much needed second agrarian reform, no comment on the rights of LGBTQI+ communities and other vulnerable groups obliterated by the state and neoliberal capitalism, and no words about the need for enforcing a secular state and an indispensable distance from religious groups, including conservative Catholic factions and fundamentalist evangelicals. Additionally, some of his proposals flirt with xenophobic positions, posing Venezuelan migration merely as a “human trafficking” problem.

Castillo represents a dogmatic response to the Peruvian questions of nation, state, and civil society. In Peruvian history, political dogmatism has resorted to military dictatorships, languages of revolution, God, and the market for finding authoritarian responses to enduring problems that date back to the fractures, fragmentations, and exclusions in the birth of the republic.

Years ago, Peruvian historians Alberto Flores Galindo and Manuel Burga coined the term “Andean utopia” to refer to the ongoing leitmotif of diverse reformist and revolutionary endeavors. Elsewhere, Flores Galindo also rephrased the struggle for this utopia as the search for the restorative strength of an Inca-like figure. Castillo is neither a utopian nor an Inca. He is not a leftist. He is the next episode of rightist authoritarian projects that are nourished by the hegemonic capitalist system for the sake its own reproduction.

Castillo’s rise may well deliver the ultimate result of the dystopian effects of capitalism in neocolonial contexts. That is, he may become yet another outsider whose only role is the perpetuation of the model he claims to challenge, boosting 200 years of traumatizing capitalist (de)formations for the 21st first century. Whether Castillo faced Fujimori, third-place finisher Rafael López Aliaga, fourth-place Hernando de Soto, or most of the other presidential candidates, the only model on the ballot would still be a version of the continuation of neoliberalism. Fujimori eking out a runoff spot with a less than 2 percent margin over the nearest contender puts Fujimorismo in a second round for the third time in a row, proving the resilience of the most twisted and crooked legacy of neoliberal politics.

Last year, a season of Andean unrest reached Peru and led to major protests following the coup against Vizcarra. Peruvian demands—pre-pandemic and current ones—echo the regional and global popular demands for police reform, constitutional transformations, and renewed forms of welfare state-like interventions that guarantee access to healthcare, education, and the overall improvement of everyday life for the impoverished many. Peru’s dissatisfaction with the status quo is palpable and has led the country to a final round between two candidates much more similar and complementary than they are different.

The first-round election results lay bare the highly fragmented nature of Peruvian politics, characteristic of the country’s unique de-institutionalizing and strongly antipolitical experience of neoliberalism. Castillo, for his part, stands as a proxy of the Peruvian and Latin American Right dressed in characterizations as a radical leftist. Again, he is no comrade in the struggle for liberation. He is, in fact, the exact opposite.