The recent death of a Chilean protestor at the hands of the police is yet another example of the country’s pattern of responding to civil unrest with force. 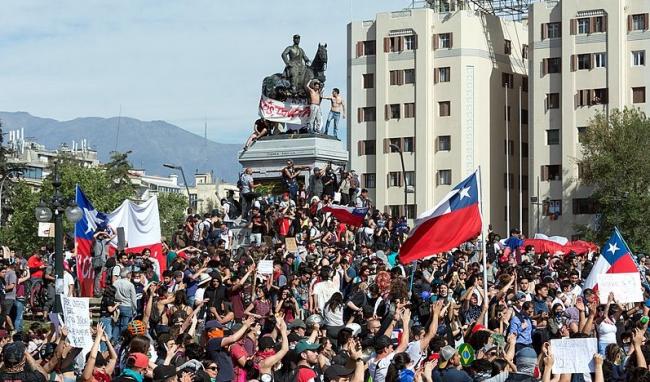 On the morning of October 10, student lawyer Denisse Cortés joined a march in support of the rights of Chile’s Indigenous communities. She was part of a team of voluntary observers who liaise with police, monitor public safety, and register detainees at protests. But on this occasion, she didn’t return home from the march.

According to reports, Cortés, 43, approached the police to ask them to refrain from tear gassing the march. Moments later she was lying on the floor semi-conscious and bleeding out. Far from aiding the injured woman, observers claim the ambulance was blocked by the police force, crucial minutes fatally snatched away. Denisse died on the operating table at the Posta Central in Central Santiago a few hours later. The police claim that a firework hurled by fellow protesters was to blame for her fatal injuries. Video evidence contradicts this version.

Police violence and impunity have been issues in Chile since the 1973 dictatorship, aided by anti-terror legislation enacted during the Pinochet regime that sought to criminalize and punish dissent. A key law used to criminalize protesters is the ‘Law for the Internal Security of the State’ (LES) implemented in 1984. It penalizes with prison anyone who is seen to “incite or induce subversion of public order or revolt,” punishing those who “meet, arrange or facilitate meetings” that conspire against the stability of the government, and those who propagate “in word or in writing” doctrines that “tend to destroy or alter the social order through violence.” Far from relaxing these laws during Chile’s painfully slow transition to democracy, each successive government has either left them intact or added further clauses.

Repression as the Status Quo

Cortés’s death is the most recent tragedy in an increasingly repressive environment. In October 2019, the “Estallido” protests were met with a violent police response. But despite calls from several international agencies such as Amnesty International and Human Rights Watch to initiate police reform, far-right president Sebastián Piñera introduced new acts. One such law, the “anti-hood (capucha) law” penalizes anyone who “intentionally covers their face in order to hide their identity, using hoods, scarves or other similar elements” while participating in actions that “seriously disturb public tranquillity.” Since the use of masks to avoid breathing toxic tear gas is necessary for anyone venturing near downtown Santiago during a protest, the anti-hood law legalizes the arrest of peaceful protesters. Earlier in 2019, Piñera introduced “Aula Segura” or the “Safe Classrooms” law that allows the expulsion of students or teachers that take part in demonstrations. It’s not uncommon for patrols of special forces to storm the grounds of schools and universities, harassing students and teachers and rifling through backpacks for evidence of political activity.

Cristian Valdebenito Fletcher lost his father in similar circumstances to that of Cortes. On March 7, 2020 his father was at a protest at the Plaza Dignidad, a site now emblematic of Chile’s struggle against inequality. He was hit by a tear gas projectile that split his cranium and killed him instantly. To date no attempt to investigate the incident has been made by the Chilean police.

Recounting his father’s death, Valdebenito said, “It’s been one year and seven months since my father was killed at the hands of the security forces, just for protesting against this system. All he wanted was a dignified health service, accessible education and decent pensions for our elderly.” What makes things worse, he said, is that his father’s killers faced no consequences, while his life is irremediably changed.

“This is Chilean injustice,” Valdebenito said. “They repress us, tear gas us, kill us, blind us, burn and imprison us.”

The violent actions of the Chilean police are widely repudiated by the public. In February, an unarmed street juggler was shot and killed by police in Panguipulli, Southern Chile. The incident sparked mass protests across the country with demonstrators calling for an end to police violence and immediate reform. The demonstrators were met with yet more violence, and arbitrary arrests. To date, nobody has been formally charged for the shooting.

Is the New Constitution a Solution?

After the 2019 protests, a movement began to rewrite Chile’s constitution. This process has been hailed as a beacon of hope for redressing the state’s abuses and addressing Chile’s deep social inequalities. The new constituent body, the Convención Constitutional, is composed of 155 elected members and is tasked with drafting a new political constitution to replace the one enacted in 1984 at the height of the dictatorship. The process began in November of 2019 when Piñera, under pressure to make deep societal changes, agreed to hold a referendum on whether to redraft the constitution. On October 25, 2020, voters overwhelmingly approved the motion, with 78 percent voting in favor. The hope is that a constitution written by diverse sectors representing all communities, and endorsed by the wider public, will strengthen labor and women’s rights and abolish the pension system.

The international media and academics have responded enthusiastically to these promised changes. In The Guardian, Kirsten Sehnbruch wrote, “Chile has the potential to set a new precedent in the region: it could heal polarizing rifts in the political spectrum; enshrine human, social and environmental rights in a constitution; and improve political and social inequalities.”

Despite the upbeat rhetoric in the international media around the inclusion of women, grassroots activists and Indigenous people, the process may not be a silver bullet when it comes to human rights, and those with more context are skeptical. Camila Vergara, political theorist, author and MSC fellow at Cambridge University commented, “Police brutality against the poor and Indigenous peoples as well as the criminalization of protest, which have been pervasive in the last three decades, have increased sharply since the October 2019 uprising.” After Cortés’s murder, Piñera declared a state of emergency in the Wallmapu territory in response to protests, effectively militarizing the territory. According to Vergara, this repressive climate has added to frustration about the ongoing process to rewrite the constitution.

An Ongoing Climate of Fear

Piñera seems intent on aggravating the human rights crisis, despite the public outcry over the killing of Cortés. He authorized the deployment of troops to the Araucania region, the ancestral home of the Indigenous Mapuche on October 12, in response to conflicts between multinational and local communities. On the streets of Chile’s main cities, peaceful protests are continually met with deadly violence and intimidation, while scores of political prisoners still languish in jail. Newly arrived immigrants, Indigenous leaders and communities are continually on the receiving end of state sanctioned aggression. Instead of choosing dialogue, Piñera has resorted to intimidation and the threat of violence.

For many activists, impunity and state violence have been the status quo since the Pinochet era. On the eve of the second anniversary of the “Estallido” uprising, an activist from Valparaiso  said, “I hope the new constitution will bring about a new Chile free from impunity, but it’s not enough, it’s just paper. And then in another 30 years we will have a new estallido with deaths, torture and more impunity.”

Vergara echoed this sentiment. “The military has already invaded the Wallmapu with war vehicles so we should expect the raiding and repression of Mapuche communities,” she said. Some activists are pushing for a restructuring of the police force, where policies, training, and even some officers, are relics from the dictatorship.  Those police, said Vergara, “see protest not as a constitutional right, and thus in need of protection, but as a crime.” Although the new constitution may address police reform, ultimately, Vergara said, change “will only stem from organic laws and new laws and policy that will force reform on the ground. The constitution by itself cannot reform the police.”

The actions of Piñera, currently implicated in the Pandora Papers scandal and now facing impeachment, reveal the true nature of Chile’s state machinery, which continues to propagate the dark legacy from its bloody past. Even amidst the formalities of the constitutional process; Chile finds itself yet again, with a human rights crisis.