Translated to English by Matty Rose from the Latin America Bureau.

If you only get your news from social media, you might be mistaken for thinking that Jair Bolsonaro is leading in the polls for Brazil’s upcoming presidential elections, which will take place this Sunday, October 2. Such a view flies in the face of what most of the polling institutes registered with the Superior Electoral Court (TSE) indicate. An exclusive investigation by the Brazilian investigative journalism agency Agência Pública has revealed how the most interacted-with and shared posts in Brazil on social media platforms such as Facebook, Twitter, Telegram, and WhatsApp share data and polls that suggest victory is certain for the incumbent Bolsonaro. These posts also propagate conspiracy theories based on false allegations that the research institutes carrying out polling have been bribed by Bolsonaro’s main rival, former president Luiz Inácio Lula da Silva, or by his party, the Workers’ Party (PT).

The investigation analyzed the most-shared posts containing the phrase “pesquisa eleitoral” (electoral polls) in the period between the August 16 official start of the campaign period through September 6. The study found that the most interacted-with and shared posts on social media spread false information or predicted victory for Jair Bolsonaro.

Of the 10 most-shared videos about the issue on Facebook, four of them were made by Gustavo Gayer, a pro-Bolsonaro influencer and congressional candidate for the same party as the president. Topping the list is a video in which Gayer tries to discredit Datafolha, an independent polling institute that is part of the the media conglomerate Grupo Folha, whose most recent poll for the presidential race shows Lula with 50 percent of voting intentions, and Bolsonaro lagging behind at 36 percent. In the video, Gayer says that “not a single person with an ounce of intelligence believes in Datafolha” and challenges the decision by a judge that granted a request by the PT to block the publication of a Datafolha poll on the contest for the state government of Bahia, in northeastern Brazil, because of methodological inconsistencies. Gayer’s video was published on August 24 and has received more than 40,000 interactions, 28,000 likes, and 9,000 shares.

Agência Pública’s investigation found that the majority of the 50 viral posts that were analyzed either sought to discredit traditional polling agencies (20 percent, 10 posts) or shared polls which predicted victory for Jair Bolsonaro or put him neck-in-neck with Lula (38 percent, 18 posts). There were 12 posts, generally made by journalistic outlets, considered to be neutral, and five posts were made by left-wing politicians who shared polls predicting victory for Lula. Of the remaining posts, four engaged with a different issue, and one spread disinformation about the safety of Brazil’s electronic voting system.

In the second-most shared post about the electoral polls, Gayer claims that the traditional polling agencies “are trying to always show Lula in the lead and Bolsonaro rejected [by the electorate],” because “they need the public money to flow freely as it did in the past.” The influencer goes on to recommend a poll in which his preferred candidate, Jair Bolsonaro, is forecast to win the elections.

The poll in question was carried out by Grupo 6 Sigma and was also reported on in a post on the pro-Bolsonaro blog Jornal da Cidade Online under the headline: “The electoral poll that the mainstream media is desperately trying to hide.” The blog post contained a link to Gayer’s video, which is monetized on YouTube and has already received more than 363,000 views and 89,000 likes. The influencer cited the poll again on a Facebook post he made a week later. Grupo 6 Sigma’s analysis has been registered with the Supreme Electoral Court (BR-04937/2022).

Facebook has also allowed the paid promotion of a survey about the presidential race, which is an electoral crime; Brazilian law prohibits “the carrying out of surveys related to the electoral process, during the electoral campaigning period.” The survey, promoted by a congressional candidate, asks: “Aren’t you sick of these polls bankrolled by the trash Globo Network [sic], which always show the thief [Lula] in the lead?” The post was promoted at least four times on Facebook and Instagram, costing approximately 400 reais ($75) in total, according to data from the Facebook Ad Library. 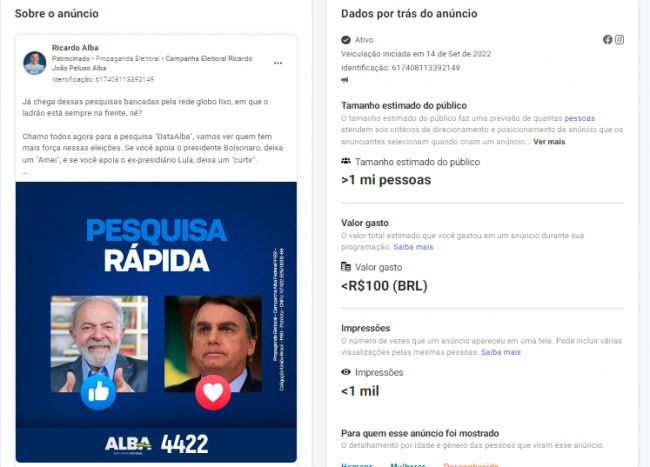 “Bolsonaro is winning today in every state, because the people want him to continue!” read the most-shared message on WhatsApp and Telegram, according to reports by the Eleições Sem Fake [Elections Without Fakes] project carried out by the Federal University of Minas Gerais (UFMG). The message asks people to forward the text to at least 10 contacts. “Show that you want to see someone honest sitting in the president’s chair of a renewed Brazil by passing on to your friends!” On WhatsApp, the text was sent 124 times by 105 different users and appeared in 87 groups, while on Telegram it appeared 28 times across 12 groups. The poll that the message purports to cite, however, does not exist.

The second-most shared message on the two platforms claimed that a group within the Supreme Federal Court (STF) want to impeach Bolsonaro’s candidacy in the face of supposed pressure from “Lula, Zé Dirceu [the former national president of the PT], and the PCC [First Command of the Capital, Brazil’s biggest organized crime group]” after they realized that Lula was set to lose the elections. “In an INTERNAL, NOT-FAKED poll, the PT discovered that Lula HAS ONLY 17% of votes and that BOLSONARO WINS in the first round with 62% of votes,” the message claims, using all-caps for emphasis. The text was sent 115 times by 93 users across 94 WhatsApp groups and was identified 16 times on Telegram across 11 groups. The claim is also based on another lie.

On Twitter, of the 20 most-retweeted posts during the period studied, six sought to discredit the polling agencies, representing 30 percent of the total sample size. Another eight posts shared polls that forecast a Bolsonaro victory, something at odds with the majority of polling analysis. One post even claimed that Bolsonaro would go into a second-round runoff against the third-place candidate, Ciro Gomes. These 14 posts were retweeted more than 12,000 times, and received over 70,000 likes. The other six of the 20 most-retweeted posts were either neutral or talked about a different issue.

Contrary to the prevailing narrative pushed by Bolsonaro’s supporters, former president Lula continues to lead the presidential race in almost all polls, a fact that has been confirmed by the newspaper Estadão's poll aggregator, which takes into consideration data from 14 major analysis institutes.

“The racket is over. Now they’re going to have to rely on Globo [Brazil’s largest media conglomerate] to pay half a million for Datafolha’s shoddy polling,” reads the most retweeted post of the investigation. In the post, journalist Paulo Figueiredo Filho, from Jovem Pan News— an outlet known as being outspokenly pro-Bolsonaro—claims that the Datafolha polls are only predicting a Lula victory because the organization stopped receiving public funding during the Bolsonaro administration. The post appears in second place in the ranking of the most liked content on Twitter investigated by Agência Pública, with more than 9,600 likes.

The prevailing discourse online has been useful to Bolsonaro and his allies. “Here we don’t have the lying Datafolha, here is our Datapovo [Datapeople],” Bolsonaro said, speaking from atop a car equipped with a sound system during the September 7 bicentennial commemoration of Brazil’s independence in Brasília. His play on words suggest that the crowds he draws to his rallies say more about the reality of his popularity than polls ever could. On the same day, the presenter of the event claimed that there were a million people in attendance, whereas the website Poder360 estimated that the crowd numbered 115,000 people at most. Inflated or not, the number of participants at the event, which turned into an electoral rally, was used by government supporters to suggest that Bolsonaro was on track to win the elections and that the polls pointing to a Lula victory were rigged.

For Felipe Borba, a political scientist and professor at the Federal University of the State of Rio de Janeiro (Unirio), polls help the voter to form a picture of the current state of the electoral process. "Voting is not just an individual decision, it's a collective decision. If the voter realizes that in isolation he does not have the capacity to influence, he looks for alternatives according to what others are also doing," Borba said.

Consequently, Borba believes that the spreading of false information about polls and polling agencies is dangerous, since it can influence voters and lead them to make “wrong” decisions that run “contrary to their preferences.”

Borba explained that it is normal for a candidate to emphasize and publicize a poll in which they are leading, but added that “if you have a poll that diverges from all the others, it doesn’t mean that it is incorrect, but it does attract attention for not fitting within the larger [data] set.”

Samara Castro, a lawyer specialized in electoral law and the communications coordinator for the Brazilian Academy of Electoral and Political Law (Abradep), believes that Bolsonaro’s supporters are creating a narrative that the electoral polls are untrustworthy in order to disrupt the electoral process. After discrediting traditional analysis, they suggest other forms of analysis that predict victory for their preferred candidate.

“[Alternative polls and surveys] are part of a narrative and are a great help in discrediting the electoral system,” Castro said.

In response to Agência Pública’s report, YouTube said that it is “an open video platform where anyone can share content, which is subject to review in accordance with our community guidelines.” The network's press office said in a call that Gayer's videos criticizing the polling agencies do not violate their guidelines.

The influencer Gayer responded to the questions put to him with the following message: “I’m lying in bed eating popcorn while I watch the desperation of the press and ‘fact-checking agencies’ over the defeat of the nine-fingered thief [a reference to former president Lula]. That’s my position.”

WhatsApp said that it “is the messaging platform that most actively cooperates with the authorities in order to protect the integrity of the elections” and cited cooperation agreements with the Superior Electoral Court and regional electoral courts featuring measures that enable voters to interact with the electoral authorities and have access to verified content related to the electoral process.

Facebook responded to Agência Pública’s questions and requested the data used in the report for internal analysis. Agência Pública shared all the information that was requested, however the social media platform decided not to offer comment. The situation with Twitter was the same.

Laura Scofield has been a journalist for Agência Pública since March 2020. She graduated from the School of Communications and Arts of the University of São Paulo (ECA-USP) where her research focused on undocumented migration of Brazilians to the United States. She collaborates with OBORÉ Projetos Especiais and is the former director of culture at Jornalismo Júnior.

Matheus Santino is a journalism student at the Universidade Paulista (UNIP). He collaborates as a correspondent at the Mural Journalism Agency of the Periferias and is a reporting intern at Agência Pública.

Subscribe to the biweekly Agência Pública newsletter in English.