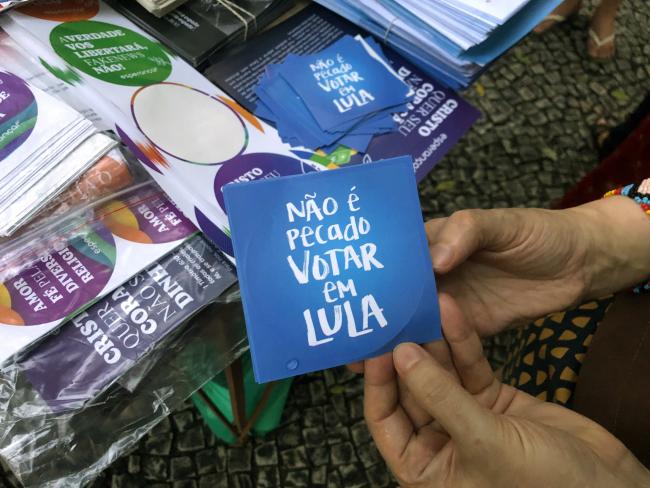 A young man plays gently on the keyboard as a room at the back of a Protestant church in Tijuca, a neighborhood in Rio de Janeiro’s North Zone, slowly fills up. The event is a vigil organized by Novas Narrativas Evangélicas (New Evangelical Narratives), a group that formed in December 2021 in reaction to growing fundamentalism in Brazil’s traditional Evangelical churches. All attendees in this overwhelmingly young and Black crowd are Evangelical Christians and reject the hold that Brazil’s current far-right president, Jair Bolsonaro, has over most of the country’s churches.

Bolsonaro will face former president Luiz Inácio Lula da Silva in a presidential runoff election on Sunday. The incumbent, whose presidency has been marked by environmental setbacks, attacks on democracy, and a catastrophic handling of the Covid-19 pandemic, performed better than expected in the first round, which Lula won with 48 percent of the vote to Bolsonaro’s 43 percent. Polls favor Lula in the runoff, but the race is a close one, and his victory is not guaranteed.

The bitter campaign is playing out mainly on moral and religious issues rather than any concrete proposals, with both sides trading disinformation-based attacks. The strategic use of disinformation has been particularly virulent on the part of the Right. As the runoff approaches, both Bolsonaro and Lula have been fighting off allegations of ties to Satan, Freemasons, and other accusations of ungodliness. To buttress his support among Evangelical voters, a reliable conservative base, Bolsonaro has doubled down on his scaremongering about the Left’s supposed threats to the traditional family and religious freedom, successfully spreading the fake news that Lula is an “abortionist” who wants to close churches.

In this toxic political environment that has placed religion at the center of Brazil’s presidential election, groups like Novas Narrativas Evangélicas have gained visibility. They represent the view of the approximately 30 percent of Evangelicals who reject Bolsonaro and the way he has put politics firmly inside churches.

“In Brazil, religion has always been very political, and politics have always been very religious,” says Lívia Reis, an anthropologist and researcher at the Rio-based Institute of Religious Studies (ISER). But what is entirely new this year, she adds, is the extent to which pastors and churches have unabashedly aligned themselves with one candidate: Bolsonaro.

Luciana Peterson, a member of Novas in Rio, agrees: “I’ve been in churches that once spoke against using pulpits as an electoral platform, but it seems that people have lost all shame in doing this, in using the church to ask for votes.”

Evangelicalism in Brazil has a short history compared to the centuries of Catholicism, but it has experienced impressive growth since Pentecostalism was imported from the United States in 1911. Along with the home-grown neo-Pentecostal churches, Pentecostalism is the dominant branch of Protestantism in Brazil. Evangelical Christians are now estimated to represent nearly a third of the population, and leaders of the various denominations that make up this religious segment enjoy huge financial and political power. Preachers such as Silas Malafaia, a Bolsonaro ally, have accumulated large personal fortunes and often blatantly tell their congregations who to vote for, and the Evangelical caucus in Congress is one of the most powerful.

In the past, many Evangelical churches maintained a good relationship with the left-leaning governments of the Workers’ Party (PT), especially during Lula’s presidency (2003-2010). But they closed ranks behind Bolsonaro and his conservative agenda in 2018. Backed by prominent Evangelical preachers and promising to protect the traditional family by rejecting issues such as the decriminalization of abortion and so-called “gender ideology,”  Bolsonaro picked up 70 percent of the Evangelical vote that year.

Although Bolsonaro is unquestionably the favorite among Evangelical voters this year, those who oppose him are now much more vocal. “Divisiveness within churches has reached previously unseen levels,” says Reis. “This more assertive movement of left-wing Evangelicals, progressive Evangelicals, comes from the persecution, the division that came with Bolsonaro’s election.”

The persecution Reis refers to includes incidents of believers being expelled from their congregation, pastors prevented from preaching due to their political beliefs, and episodes of violence inside churches. In this polarized climate, even progressive Evangelicals who oppose the politicization of churches have been compelled to take a stand in favor of the leftist candidate.

Vladimir de Oliveira Souza arrives at the coworking space where his congregation gathers every Sunday sporting a Pink Floyd t-shirt and a big smile. Known to his congregation as Vlad, Oliveira is the pastor at the Igreja Cristão Redenção Baixada, a Baptist church in Nilópolis, a town in the low income Baixada Fluminense suburbs of Rio. Redenção BXD, as the church is known, is affiliated with the Aliança de Batistas do Brasil, a denomination which recently took a stance against Bolsonaro in the runoff.

Oliveira set up his church in the wake of the massive 2013 protests, which many in Brazil pinpoint as the start of the movement which eventually led to the rise of Bolsonarismo. These protests, followed by the impeachment of then-President Dilma Rousseff in 2016 and the election of Bolsonaro in 2018, “led civil society, along with religious organizations, towards the camp of the extreme-right,” says Oliveira. “The big change happening today in churches like Redenção, is that we have the freedom to take a stand against this scenario [of radicalization],” he adds.

Redenção BXD is an organic, informal church, which eschews the hierarchical structure and “church-as-business” model often seen amongst Evangelical denominations in Brazil. The church’s focus on issues like human rights and environmental justice automatically puts it at odds with the current president and his agenda, but Oliveira is not strident about this opposition. He only briefly touches on politics in his service a fortnight before the presidential runoff. After reminding his congregation that there will be no meeting on Sunday, October 30 because it is election day, he says, “The Redenção church does not have a candidate, but we do have values.”

“Bolsonaro out!” one of the congregants replies, leaving no doubt as to what those values are.

Oliveira’s church is perhaps the only one in the poor, conservative, and heavily Bolsonarista Baixada Fluminense area that offers this different, more progressive narrative.

“Redenção represents a church model that does not have the same visibility and the same force—political and economic—to oppose [the pursuit of power of conservative churches]. But we understand that we are the resistance,” Oliveira says. 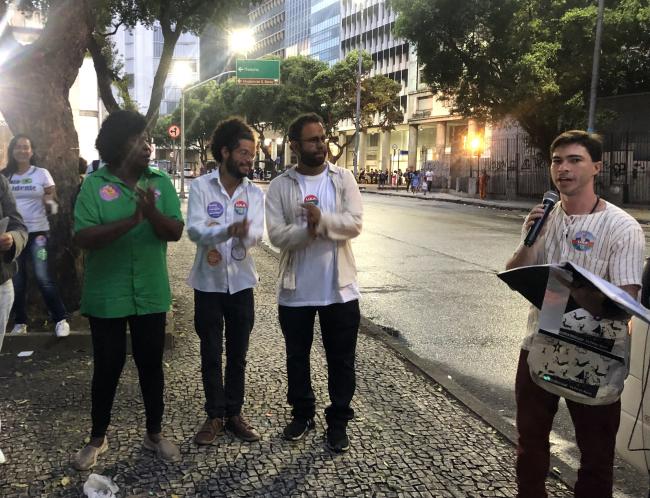 The Baixada Fluminense has produced another figure of Evangelical resistance in the person of Wesley Teixeira. The son and grandson of pastors, Teixeira identifies as Black, Evangelical, and left-wing. “These [first] two characteristics, no-one puts them in opposition. But lately, we’ve seen [Evangelical] contrasted with the left,” says Teixeira, who grew up in the suburban city of Duque de Caxias. “I am left-wing because I believe politics must be in the interest of the poor population.”

Teixeira has embraced politics to defend his values and the people he represents: Black Brazilians, the population of suburban Rio, and Evangelicals who defend political freedom. This year he ran for state deputy of Rio de Janeiro, representing the Brazilian Socialist Party (PSB). Although he was not elected, Rio did gain a new left-wing Evangelical representative: Henrique Vieira, a Baptist pastor belonging to the Socialism and Freedom Party (PSOL), was elected to the federal congress. Teixeira, meanwhile, has joined Lula’s campaign, working to guarantee that the former president’s slim lead delivers him an electoral victory this Sunday.

“There have always been left-wing Evangelicals, this is not new,” Teixeira says. “But I think their visibility and counterweight has increased a lot, because in the past few years we have seen the rise of an Evangelicalism linked to the ideas of violence, hatred, guns—basically to the extreme-right.” Teixeira criticizes the powerful Evangelical bloc in the federal Congress, which is dubbed the “Bible caucus” and defends a conservative social agenda, for seeking to speak for all Evangelical Christians in Brazil. “We are multifaceted—different pastors with different positions—and this has nothing to do with, nor does it undermine, our relationship with our faith.”

This is the view defended by Novas, which welcomes into its fold any Evangelical who challenges the exclusionary narrative peddled by Bolsonaro-supporting churches. The people who seek out the group tend to be young and outspoken on issues such as feminism, the anti-racist agenda, and LGBTQIA+ issues—views for which they have been branded “bad Christians” in their own churches.

She describes Novas as a “balm” for the wounded Christians who have been rejected by their church but refuse to abandon their faith—a group known as the “unchurched”. As well as running an active Instagram account, which has nearly 8,000 followers, Novas has started organizing in-person events in a few major cities, such as the vigil in Rio which attracted about 30 people. Without being affiliated with a specific church, the organization provides a space for Christians from different Evangelical denominations—whether unchurched or uncomfortable in their current community—to meet, share their experiences, sing, and pray. Under the motto “there are different ways of being a believer,” the group will hold its first conference in December.

Although Novas’s 150 core members are spread across 12 of Brazil’s 27 states, Peterson, like Oliveira, is realistic about the network’s small size compared to the established mega-churches they are seeking to challenge. “I think we’ve made a difference,” she says. “When we say that a believer does not have to vote for Bolsonaro, that has an impact, because lots of churches are saying the opposite.”

Constance Malleret is a French and British freelance writer based in Rio de Janeiro, Brazil. She covers Brazilian politics, business, and social and environmental issues.