After a record-breaking presidential primary, the Colombian Left has a fighting chance at winning the top office and challenging the legacy of the country's most powerful politician. 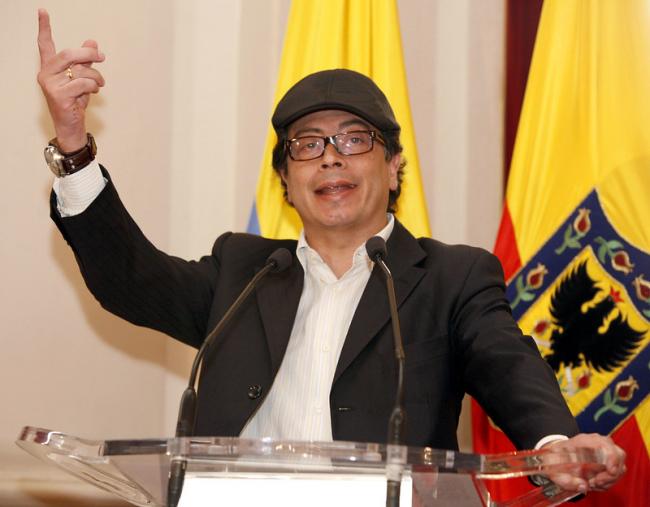 On November 19, outside of Medellín's Botanical Gardens, a few hundred young people gathered for the Entre Montañas Fest. Although on the surface it looked like a typical concert, the headliner was not a band but the former mayor of Bogotá, senator, and leftist presidential candidate, Gustavo Petro. In his speech, Petro emphasized the importance of Medellín and the department of Antioquia in the Pacto Histórico (Historic Pact) coalition that he has built with the other candidates, including the former governor of Nariño, Camilo Romero, and Afro-Colombian activist and presidential candidate Francia Márquez, who accompanied him at the event.

In the weeks following the rally, Petro went on to fill the plazas in Bello and La Estrella, two working-class suburbs of Medellín. Events like these would have been unthinkable in Antioquia even a few years ago. The department has long been tied with paramilitarism, the drug economy, and most of all the right-wing former president Álvaro Uribe, who presided over massive human rights violations while waging a war against the country's insurgencies.

For decades, the Colombian Left has been largely associated with violence and guerilla groups, and the country’s government has remained staunchly right wing. But on March 13, Colombian voters showed that they are ready for change: Petro received a record-setting almost 4.5 million votes in the presidential primaries, and Pacto Histórico was the most voted party in the congressional races. Although Petro’s victory in the presidential election in May is not guaranteed, it is clear that Uribe's hold on Antioquia is slipping and hundreds of thousands of Antioqueños are looking to the left.

The Changing Demographics of Voters

According to former Medellín City Council member and congressperson-elect Luz Mariana "Luzma" Múnera, campaigning as a leftist in Medellín has always been a difficult task—especially as a woman. But as one the founders of the leftist political party Polo Democrático Alternativo (Democratic Alternative Pole), she has also seen the city’s politics transform over the years.

"New generations are expressing themselves by taking to the streets,” said Marín, adding that he thinks young people’s participation has increased, pushing for change through protest and at the polls. “They broke what we call the Uribista spell,” he said, referring to Uribe’s political domination in the area and the massive protests—sparked by policies of Uribe’s protégé, President Iván Duque—that have gripped the country over the past two years.

Marín emphasized that much of the anti-establishment sentiment comes from the new generation’s experience of living nearly their entire lives amid armed conflict. For years, the government focused its efforts on militarization while neglecting the economic and social issues that led to the insurgency in the first place. Younger generations have had enough and have organized multiple nationwide strikes over the past few years.

“A large portion of Medellín’s youth are constantly connected to the internet and that makes them have a distinct relationship to politics," Marín said. But for real change to occur, young people need to vote, and mobilizing them to show up at the polls may be difficult. Many feel disillusioned with electoral politics because of clientelism and corruption and think that regardless of who they vote for, the same politics will remain.

The Battle Against Electoral Apathy

Since the March 13 elections, activists from the Pacto Histórico, the Green Alliance, and Fuerza Ciudadana (Citizen's Force) contested the results of the initial precount, claiming miscounted ballots and election fraud. During the scrutiny, the Pacto has recovered nearly 500,000 "lost" votes. While the final results of the March 13 elections are not publicly available at this time, the precount released by the Registraduria Nacional (National Registry) shows that the Pacto was the most voted political group in the country with nearly 5.5 million people voting in the coalition's presidential primaries and nearly 2.5 million people voting for its congressional candidates.

Although less than 50 percent of Colombians voted, the Pacto made significant gains in regions like Antioquia that have not typically voted for the Left. According to the National Registry, 392,609 Antioqueños voted in the Pacto's presidential primary. Of those votes, Petro received 275,603 votes, more than double the 117,950 votes for the department's former governor Sergio Fajardo. In the legislative elections, the preliminary count showed that the Pacto received 224,586 votes (11.3 percent), guaranteeing the coalition two of Antioquia's seats in the House of Representatives. In recuperating those "lost" votes, Pacto activists have recovered enough miscounted votes in the department to secure a third seat in Antioquia's congressional delegation.

The municipal voting results show that the Pacto did particularly well in Medellín, where the coalition received nearly 109,395 votes, coming in second to Uribe's Democratic Center Party. The Pacto also did well in areas that have been significantly affected by the armed conflict, like Apartadó. In the Apartadó presidential primaries, the Pacto received over 12,000 votes, almost double the votes received by the highest performing party in the legislative elections, the Liberal Party. This trend shows that, although voters may not have voted for the Pacto in the legislative election, they would be willing to show up for Petro in May's presidential election.

These results demonstrate the mobilizing power of the Pacto's broad proposals to democratize the country’s politics and economy. Petro’s policy announcements often make headlines, like when he said that he wanted to reform the central bank, healthcare, and education systems to serve the needs of the majority of Colombians, not just the elite. Petro has also said that he plans on moving away from fossil fuels—a big statement in a country that still relies heavily on the state-controlled oil industry—and creating economies around the water, going as far as proposing a new department along the Magdalena river.

One of the Pacto's key proposals for the countryside is the implementation of the 2016 Peace Agreement between the Colombian government and the now-disbanded Revolutionary Armed Forces of Colombia (FARC). While the Duque administration has paid lip service to the agreement—it has failed due to a lack of funding and political will—to actually implement significant parts of the agreement. If the Pacto were able to fully implement the land reform and crop substitution sections of the agreement, citizens in rural areas would have a real alternative to the coca export economy and its reign of violence in the Colombian countryside.

The Pacto also hopes to address the unequal access to land, an issue that predates the armed conflict and has not been addressed because key stakeholders in most previous governments have been large landowners. Petro also promises to expand peace by negotiating a peace agreement with the country's other insurgency, the National Liberation Army (ELN), which would significantly impact various rural regions where the group has massively expanded during the Duque administration.

According to José Miguel Sánchez Giraldo, an advisor to the Petro campaign, Antioquia is one of the most important regions for the upcoming election because it's the place where Duque had the largest lead over Gustavo Petro in the 2018 presidential race. The department embodies many of Colombia's contradictions, including extreme wealth inequality, strategic drug trafficking routes, and political violence. As a historical bastion of Uribismo, it is home to two other presidential candidates, former Medellín mayors Frederico Gutiérrez and Sergio Fajardo, who could face each other in a runoff.

The importance of Antioquia for Petro has led the Pacto to seek a surprising alliance with the Liberal Party, Colombia's oldest political party. In the past, the party was home to progressive leaders like assassinated presidential candidate Jorge Eliécer Gaitán and former president Alfonso López Pumarejo. But for many Colombians today, the Liberal Party, which controls many Antioquian municipal governments, is associated with clientelism and corruption.

In the past few months, Petro has come under fire from both the Left and the center. In a debate on January 25, centrist presidential candidate and former Liberal Party member, Juan Manuel Galán, criticized Petro for seeking alliances with former Antioquia governor Luis Pérez and other politicians accused of corruption. The possibility of an alliance with Pérez particularly upset the Left given Pérez’s involvement as then mayor of Medellín in the 2002 Operación Orión, a coordinated military and paramilitary counterinsurgency offensive in Medellín's Comuna 13 neighborhood that resulted in over 150 forced disappearances.

Some Petro supporters see these alliances as necessary evils and have openly called for former president César Gavira, the head of the Liberal Party and the architect of Colombia's neoliberal economic model, to join the Pacto. Others see it as a way for the Liberal Party to recover its past prestige and return to its progressive roots supporting social justice, minority rights, and peace.

When asked about the alliances in Antioquia, Petro’s advisor Sánchez Giraldo said: "We're calling for all those who support progressive liberalism, democratic liberalism, and classical liberalism to join. We're not just open to liberals but also conservatives." He emphasized that the Pacto is a "sancocho nacional" that incorporates a mix of tendencies to create a new Colombia.

Aquino and Múnera did not share that optimism. Given the role that César Gaviria and the Liberal Party have played in crafting the neoliberal model in Colombia, Aquino thinks the alliance is a bad idea.

The rise of Francia Márquez has proved that many young people want to see candidates who put grassroots organizing over political alliances. "Just because politics in Colombia involves making alliances with unholy people to win doesn't mean we have to keep doing it," Marín commented, emphasizing that young people want to do politics differently and prefer to stick to their principles over winning with shaky alliances. Márquez amassed nearly 800,000 votes, more than the winning centrist party presidential candidate Sergio Fajardo. Márquez rose quickly from someone known only in activist circles to a household name and the vice-presidential candidate on the Pacto's ticket.

Múnera said that while she dislikes the Pacto’s alliances, she recognizes that they are necessary to win. But she insisted that the Pacto needs to think about the big picture, because the transformational change that Colombia needs will take 16 to 20 years to achieve and will be made up of various stages. Over the first four years of Petro's presidency, his government will need to create political consciousness among larger sectors of Colombian society to ensure popular support for lasting change.

Colombia is experiencing one of the worst periods of inflation in its history, and violence in the countryside has reached levels not seen since the height of the conflict. Whoever wins the upcoming elections will be forced to play a balancing act to govern. For now, the Pacto Histórico continues inspiring voters with its promise that, despite all the obstacles, it is possible to build a new country, a country that fulfills the promises of social justice enshrined in the constitution and the 2016 peace agreement.

Cruz Bonlarron Martínez is an independent writer and researcher. He's currently conducting a Fulbright research fellowship on the connection between agrarian reform and the peace process in Antioquia, Colombia.