The road to achieving sustainable energy in Puerto Rico should not be paved by bulldozing agricultural lands and coastal plains. 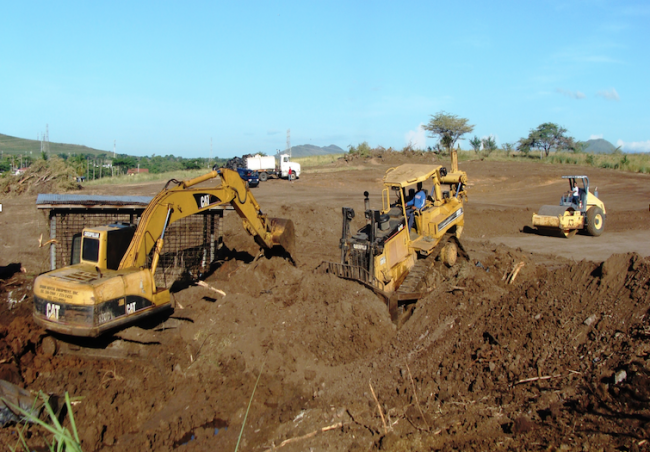 The devastation wrought by the 2017 hurricane season showed that the Puerto Rico archipelago is already experiencing some of the gravest impacts of the climate crisis. And yet, it appears that powerful economic interests and lack of planning continue to take precedence over mitigating the archipelago’s worsening and intensifying climate-related emergencies. Recent environmental news about Puerto Rico has focused on ongoing construction projects as well as the destruction of the archipelago’s coastal ecosystems. But unbeknownst to many, environmental destruction, degradation, and harm are also increasingly threatening inland areas, under the banner of developing the archipelago’s sustainable energy infrastructure.

In February 2022, the PR Energy Bureau issued an order approving 18 solar energy projects. But going against all scientific and planning recommendations that indicate solar projects in Puerto Rico should be sited on existing rooftops and structures, only two of the 18 projects are categorized as “virtual power plants” (VPPs)—technical language that refers to on-site solar. The other projects are utility-scale renewable energy installations to be sited on scarce agricultural land and coastal plains. In fact, to our great dismay, in Puerto Rico’s south, the clearing of land, vegetation, and forests to install solar panel “farms” is already well under way. 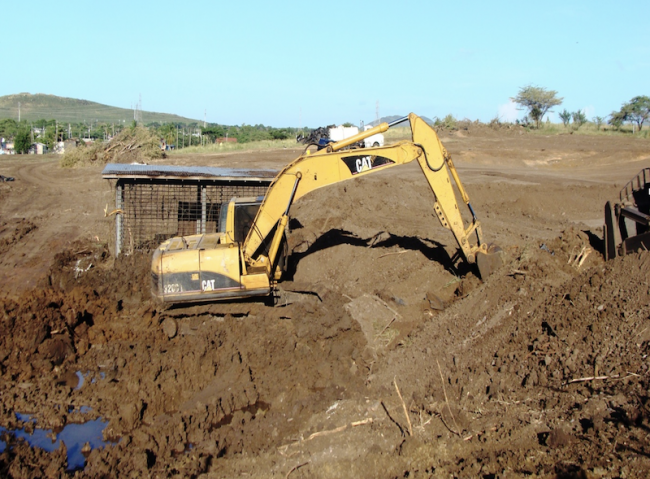 To clear space for industrial utility-scale solar projects, large swaths of land in Salinas, Puerto Rico are being cleared, destroying vegetation and soil in the process. The same devastating actions are proposed in the southwest and other parts of the archipelago. The first of these projects started approximately 10 years ago when the Puerto Rico Electric Power Authority (PREPA) signed over 60 contracts with “developers.” Less than 10 of those projects were built due to a variety of reasons, including public opposition. Currently, civil society groups are gearing up to oppose this second round of industrial scale renewable energy installations.

These projects do not only cause permanent damage to land by scraping off the topsoil, altering the topography, and compacting the soil in a way that prevents infiltration of water into the soil and the underlying aquifer. Utility-scale industrial projects can also impact groundwater, cause changes and sedimentation of superficial water courses, alter drainage patterns, and aggravate flooding, which is the largest source of disaster damage in Puerto Rico. This infrastructure also destroys biodiverse habitats, and the loss of vegetation contributes to warming the ecosystem.

Furthermore, utility-scale projects are dependent on expensive and vulnerable transmission and distribution lines, poles, towers, and substations. In 2005, Congress determined that rebuilding these lines repeatedly was not a cost-effective strategy, stating: “…electric power transmission and distribution lines in insular areas [including Puerto Rico] are inadequate to withstand damage caused by the hurricanes and typhoons which frequently occur in insular areas and such damage often costs millions of dollars to repair.” The impact of the 2017 hurricane season on utility-scale solar facilities on the archipelago was so massive that it took almost 15 months to return to pre-2017 levels of total generation. 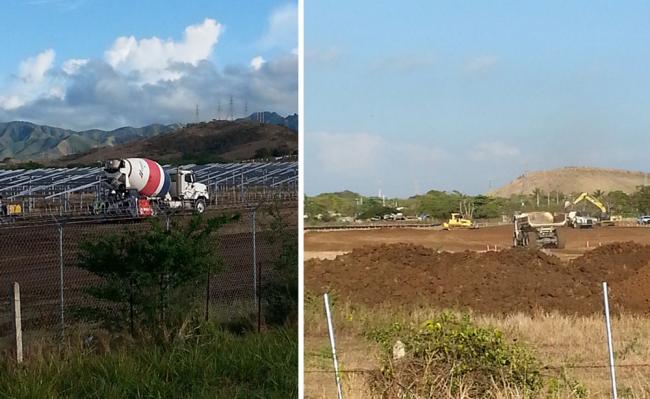 The benefits of installing on-site solar on existing rooftop structures, coupled with battery energy storage systems, are extensive. A significant consideration is Puerto Rico’s size, as its limited territory does not have space for siting industrial solar utility-scale projects. A small archipelago with plentiful and available rooftops should not sacrifice its precious land to meet electric energy needs. Multiple studies confirm that distributed renewables, such as rooftop solar and battery energy storage systems, are the most resilient and viable option amid more frequent and intense hurricanes triggered by climate change.

Research has shown the viability, reliability, and economic benefits of rooftop solar and storage in Puerto Rico. More than a decade ago, faculty at the University of Puerto Rico found that rooftop solar is “the least environmentally intrusive” way to generate energy in Puerto Rico. That report recommended generating power locally with solar energy and, in certain cases, creating microgrids, such as for high-rise buildings. In a 2020 study, the U.S. Department of Energy (DOE) and the National Renewable Energy Laboratory (NREL) highlighted the rooftop solar potential in Puerto Rico, stating that solar energy generation sited on rooftops offset or reduced the overall energy needed for transmission and distribution. Importantly, this study also found a strong potential for using structures for low- to moderate-income households—such as apartment buildings—for this transformation. According to the NREL study, Puerto Rico has the potential to produce four to five times as much solar energy as is needed to meet its current residential demand. More recently, Cambio PR and the Institute for Energy, Economics and Financial Analysis set out a plan to achieve 75 percent renewable power generation in 15 years. But sacrificing island acreage to solar farms would essentially cancel the environmental gains of renewable solar energy.

Placing solar panels on rooftops generates what the U.S. Department of Energy calls “offsets” to the electric system, thereby saving money on transmission and distribution costs. This siting also avoids the loss of electricity that occurs during long distance transmission. On-site solar is much more cost effective and less prone to damage from flooding and hurricanes. Solar panels also protect roofs and keep the structures on which they are placed cooler, while also adding economic value to homes and buildings. In contrast to solar farms, rooftop solar doesn't extensively require restrictive rights of way for electrical infrastructure, such as transmission and distribution towers, poles, and substations.

Centralized, industrial installations are not necessary, efficient, or a resilient way to deliver electricity services. Puerto Rico imports more than 85 percent of its food. In the aftermath of Hurricane Maria, grocery stores faced dwindling food supplies, and many ran out of food. Agricultural land should be protected from further construction of industrial utility-scale renewable energy projects to safeguard food security and sovereignty in Puerto Rico. In 1964, Puerto Rico’s agricultural land area was estimated at 1,595,866 acres; that number dropped to 474,332 acres in 2018. This change amounts to an agricultural land-area loss of approximately 70 percent. In the last five years, Puerto Rico lost an additional 94,534 acres. The Puerto Rico 2016 Land Use Plan requires reserving 636,000 acres of land area for agricultural production, but the current land designated for agricultural purposes is less than 500,000 acres. 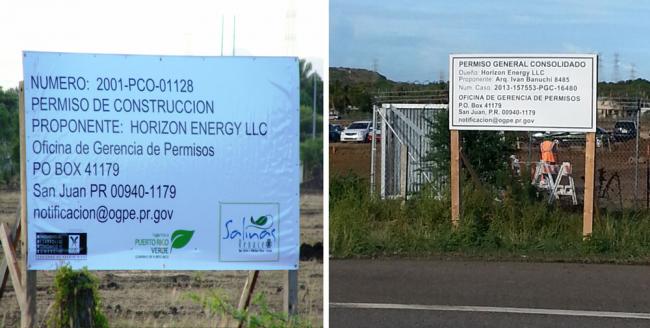 Puerto Rico Should Steward, Not Destroy its Soil and Vegetation

Worryingly, Puerto Rico has become a “cryptofrontier” in which “crypto colonizers” can continue to enact the ongoing extractivist and environmentally destructive logics that have historically plagued the archipelago in a new way. These powerful new “big business” actors come in the guise of individuals who established residency in the archipelago to claim tax exceptions and incentives under Acts 60/20/22. Steeped in a libertarian and neoliberal ethos of little to no government oversight, environmental deregulation, decentralized finance, and the largely unregulated online cryptocurrency markets, their digital world relies on very large amounts of electricity. Blockchain enterprises are interested in cashing in on the push to increase solar energy generation in Puerto Rico. This reality is illustrated by Sollarcollab, a solar energy project development company that advertises Puerto Rico as an “ideal solar farm site location” because “there should be no environmental zoning restrictions.” An increase in crypto residents and entrepreneurs living on the archipelago will also mean an increase in demand for electricity to run their equipment.

Do these solar farms portend the era of green gentrification on the archipelago? A possible and deeply concerning future for Puerto Rico could be an era in which the wealthy will rely on rooftop solar and storage while low-income and low-wealth communities are made to depend on an unreliable centralized grid that runs on imported liquified “natural” gas and industrial utility-scale solar installations or "farms." In this scenario, economic elites will flaunt their environmentally friendly approach to energy generation, and communities already facing the most serious consequences of environmental, climate, and energy injustices will continue to suffer the ills wrought by highly centralized systems and fossil fuels. Meanwhile, large swaths of agricultural land will go to energy generation rather than to food production. Such a trajectory will yield an ever less resilient and viable archipelago in the face of climate-related emergencies and food shortages. And yet, with the installation of solar "farms" throughout the archipelago, both the local and federal governments will boast increasing solar energy generation, while downplaying their tragic environmental, societal, and other impacts.

Vegetation holds land in place, absorbs greenhouse gases, contains biodiversity, provides habitats for local animal species, and supports many other ecosystem relationships. Recent historic rainfall and the precipitation events during and after Hurricane Maria resulted in landslides that threatened communities, blocked roads, and caused millions of dollars in infrastructure damage. In a heating world, after ecosystems are destroyed, trying to restore these spaces becomes increasingly difficult. Reliance on solar farms replicates past extractivist logics that have been rooted in expansionist ideology and infrastructure, rather than approaching energy and power relationships in decentralized ways that seek to honor and nourish existing ecosystems.

Federal disaster recovery funds should not be used to destroy agricultural land and coastal plains by subsidizing the massive build out of utility-scale renewable energy projects in Puerto Rico. Given that some of the proposed utility-scale renewable energy projects could receive U.S. federal disaster recovery subsidies, it is imperative to shift funding allocated to the Puerto Rico Electric Power Authority toward investing in providing life-saving infrastructure. Such a move would cultivate resilience by equipping homes and other existing structures with rooftop solar and battery energy storage systems. These technologies are crucial for residents, businesses, and institutions in Puerto Rico to survive and flourish in ways that enact environmental, climate, and energy justice.

Ruth Santiago is an environmental and community lawyer who lives and works in Salinas, Puerto Rico. She is a member of the White House Environmental Justice Advisory Council and is a trustee on the board of Earthjustice.

Hilda Lloréns is an Associate Professor of Anthropology and Marine Affairs at the University of Rhode Island. She is the author of Making Livable Worlds: Afro-Puerto Rican Women Building Environmental Justice (2021).

Catalina M. de Onís is a faculty member in the Department of Communication at the University of Colorado Denver. She is the author of Energy Islands: Metaphors of Power, Extractivism, and Justice in Puerto Rico (2021).