To My Fellow BoriBlancos: When We Say “Down with White Power,” We Also Mean Our White Power

Instead of characterizing race and whiteness as belonging to the social structures and culture of the United States, White Puerto Ricans must acknowledge and confront anti-Black racism within their own communities. 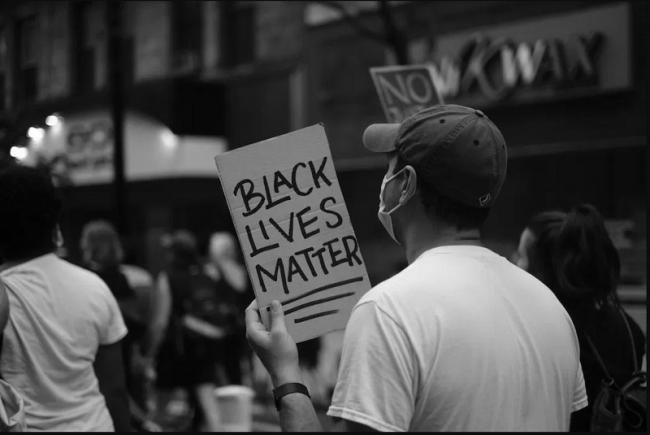 As an instructor at Rutgers-New Brunswick, I have had the opportunity to observe how other White Latinxs learn about and discuss whiteness. Recently, a former student reached out to discuss race and colorism in the Latinx community and to ponder about the role Latinxs have in the Black Lives Matter (BLM) movement and the fight towards Black liberation.

This student, also White and Puerto Rican, found it hard to “own up” to white privilege given that they were discriminated against in their high school for being Hispanic. This student noticed how White Latinxs avoid identifying as “White”—even if they are identified as White—because it comes with the association that you are White and American, a gringo.

I share this conversation because it carries the sentiment that I sense other White Puerto Ricans and Latinxs might be feeling during these past months. I say White Puerto Rican because utilizing the term “White-passing” or “light-skin” avoids or sidesteps a reality: my skin is white and my phenotypical features (like my ancestors) are European. I agree with other scholars and activists that have pointed out that Latinxs have been largely silent during such a critical moment. During my participation in rallies and actions, I have seen a fair share of Latinx Lives Matter Too banners and slogans.

Others have pointed out that this signals how Latinxs perceive antiblackness as a phenomenon outside of or “missing” in the Latinx experience, which constitutes an erasure of Afro-Latinx history, identity, and lived experience. I have also noticed White and Mestizx Latinx use the label and claim of “ally” and “allyship” as a form of self-aggrandization, proclaimed victimhood, and placating actions.

White and Mestizx Puerto Ricans base these arguments in part on a distortion of the history of white supremacy in Puerto Rico, and the characterization of race and whiteness as belonging to the social structures and culture of the United States. Without a doubt, antiblackness remains a common denominator throughout Latin America as a product of colonialism and mestizaje.

While most Latin American countries were diminishing their participation in the Transatlantic Slave Trade, Puerto Rico’s enslaved population peaked during the 19th century. Puerto Rico was the third-to-last country to abolish slavery, in 1873, in the Americas. After the U.S. invasion in 1898, White Creole elites worked to maintain power and capital in the archipelago through the consolidation of land and resources. U.S. politicians and the media racialized Puerto Ricans through imperialist and Jim Crow racial logics; however, White Creoles forged the “Great Puerto Rican Family” image that would stand in opposition of the White Anglo family, as a Mestizx, educated, Christian, and middle-class family. Afro-Boricuas and the Black diaspora were left out of this framing, while political leaders strove to either ignore Puerto Rico’s history of slavery or adopt a “reconciliatory” stance on race relations.

With the creation the Puerto Rican Commonwealth, many of the tools used in the United States to disenfranchise African-Americans and the Black diaspora were used to further marginalize Afro-Puerto Ricans, like redlining and housing policy, census biases, policing, and mass-incarceration. Today, Afro-Puerto Rican and historically Black communities continue to be disproportionally affected by poverty, environmental racism, lower health status, and police brutality. State tools used to forge a new country after Reconstruction and quell Black radicalism in the U.S. were also utilized in Puerto Rico to maintain the racial hierarchies created by the Spanish. American Whites and White and Mestizx Puerto Ricans deployed a political economy that created a Puerto Rican Commonwealth, national identity, and culture.

The other element shaping Puerto Ricans’ denial of anti-Black racism in the archipelago and the diaspora is the logic that the colonial status of Puerto Rico exonerates anyone born in the archipelago from having any white privilege. This “Puerto Rican-ness” is a trap that further marginalizes oppressed groups within Puerto Rican society in the interest of demanding civil and social rights from the United States. This trap also overlooks the other “colonies” in the U.S. mainland, including reservations and low-income Black communities, with their own history of displacement, expropriation, debt, and policing.

Finally, this White Puerto Rican logic of being “outside of” race—shared by other Latinxs—has only furthered a slow change in U.S. racial hierarchies where Latinxs could be included into the White category as “honorary Whites” in order to maintain a racial majority. In fact, research has shown how light-skin and White Puerto Ricans most often deploy their language skills, nationality citizenship status, and class status to access resources and avoid discrimination in the archipelago and U.S. Mainland. These rationalizations of race and calculations of privilege and oppression ignore the global currency of white skin, regardless of sexual orientation, class status, gender, education, etc.

Despite this history and contemporary reality, Puerto Ricans in the archipelago and the diaspora, politicians, artists and icons, and scholars have responded to the BLM and Black liberation movements with a range from hate speech to avoidance. Residente, founder of the group Calle 13, criticized the U.S. hip-hop genre and Black artists for being “too U.S.-centered” and low-quality. When some fans criticized his statements as a White Latino, Residente took to Twitter to defend himself, saying that he has no white privilege and that residents in the United States have more privilege than him. Similarly, reggaeton artist Cosculluela dismissed the 2020 protests as “trash protests that are not welcome here [P.R.]” since they are a “racial problem that belongs to the U.S. Let them kill each other over there.”

Shortly afterward, political commentator Luis Dávila Colón defended the use of blackface and Afro-Puerto Rican vernacular Spanish on the show “La Comay,” which has previously been criticized for yellow journalism and misreporting, hate speech, homophobia, misogyny, and transphobia. Dávila claimed that it was permissible for the show to make fun of Black people because in the U.S., “[Black people] make fun of each other all the time.” He also utilized the n-word. During a House of Representative session, Representative Luis “Junior” Pérez Ortiz celebrated Dávila Colón’s career and decried his critics as a “hypocrites” and “snowflakes” (blandengues). Pérez Ortiz used the n-word during his speech on the House floor, and, when the opposition requested that the word be struck from the record, the majority voted “no.”

Meanwhile, responses by White Puerto Ricans in favor of the BLM movement and protests have been tepid and lacking. Trap and reggaetón superstar Bad Bunny went on a social media hiatus on May 19 and stayed silent for weeks after following the killing of George Floyd. Last summer, Bad Bunny had been active and vocal throughout the anti-corruption protests that ended with the resignation of Governor Ricardo Roselló. The artist resurfaced on June 12 to state his support of the BLM protests in an exclusive statement on TIME magazine. Bad Bunny then partnered with San Juan mayor Carmen Yulín Cruz Soto to finance the painting of the phrase “Black Lives Matter” in the Ashford Avenue in the wealthy and touristy neighborhood of Condado. The phrase was also painted on the roof of the stadium Hiram Bithorn to “let tourists know that we take the issue of racism with respect and seriousness,” as stated by major Cruz Soto. Some have questioned the gesture, saying that it comes off as self-congratulatory public relations stunt to quell a sense of guilt.

White Puerto Rican scholars have also been questioned for their ideas of whiteness and prejudice in Puerto Rico. In an article, Dr. Beatriz Llenín Figueroa repeatedly laments “being born into whiteness by chance” and asks herself “what place can an anti-White white body by chance create in a colonized space?” [Author’s translation]. Likewise, she implies the United States is responsible for importing and maintaining white supremacy in Puerto Rico, supremacy that is only manifested by White Americans. In a fitting response, Dr. Marissel Hernández-Romero points out that, by conceptualizing she is born White and into whiteness “by chance,” Llenín Figueroa is erasing or mitigating the legacy of White and Mestizx Creoles, who along with White Americans, crafted a Puerto Rican commonwealth for the benefit of Whites. 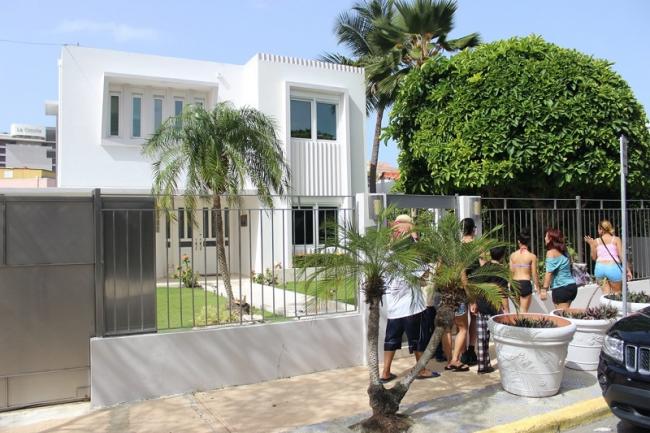 What do White Latinx gain from distancing themselves from whiteness? In the classroom and in conversation with other White Latinxs, I have seen White Latinxs carry out an estimation or calculation to determine if they are White-White. Often it’s biological: body appearances and lineages. Other times it’s a question of nationality and birthplace: the archipelago or the diaspora. Sometimes it’s a question of language. These calculations are proof of how White Latinxs can utilize social characteristics to remain in a space of racial ambiguity. While they can claim they are racialized by way of ethnicity, language, class or birthplace, White Latinxs still benefit from having white skin in a white supremacist society.

Afro-Latinxs, however, are “fixed,” in the words of Fanon. Afro-Latinxs are Black by “default,” while White Latinos have the privilege to determine how they will identify and present themselves. As shown in this essay, White Latinos can distance themselves from blackness through discursive and performative actions. I have yet to find the term “white guilt” in the White Latinxs framework and vocabulary, probably because it’s reserved for White Americans.

Identifying as White-White carries with it the implication that, as a White Latinx, you are responsible for the histories of violence and oppression sanctioned by white entitlement and narcissism. It’s a heavy acknowledgement that even White Americans try to shy away from. Because of this, White Latinxs can claim ethnic, sexual, gender, class, and other types of oppression to deflect the white category. I use Kimberlé Crenshaw’s TED talk on intersectionality to foster discussion on how we exist at intersections of oppression. While you might be gender-oppressed, your white skin color and college education allow you to access important resources and networks.

Despite the long history of colonization and its effects, White Puerto Ricans have been assured a position of power by White European and Creole elites in the past. Political and economic processes allowed for wealth and capital to be accumulated among White and Mestizx elites, while displacing and disowning low-income and Black Puerto Ricans. The establishment of a Mestizx cultural hegemony was possible through an appropriation of cultural products and practices from non-White Puerto Ricans.

The framing of white supremacy as endemic or belonging to the United States fails to acknowledge how white supremacy has been the axis of our society since 1492. Meanwhile, we seem to hold White Americans to much higher standards than our own community when it comes to race and racial injustice. During such a crucial time, avoiding conversations on race, or asking non-Whites to help you in understanding, or to maintain your reputation and social standing after blunders, are all proof of the privilege we possess.

Our denunciation of white supremacy should come with a commitment to destroy white supremacy everywhere: internationality, in our country, in the diaspora, within our communities and families, and within ourselves.

Mario Mercado-Diaz is a writer, photographer, and amateur farmer from Arecibo, P.R. He is a Doctoral Candidate in the Sociology Program at Rutgers-New Brunswick. His dissertation research compares the integration and home-making process between groups of Latinx migrants in Houston, TX. Using mixed methods, he critiques how White and wealthy Latinxs weaponize identity politics and racial self-identification to access capital and perpetuate neighborhood displacement. He has published various op-eds on urban change, teaching, and political economy. You can follow him on Twitter at: @mmercadodiaz.