Despite government neglect and environmental challenges, informal communities along the U.S.-Mexico border find innovative ways to build and maintain their neighborhoods. 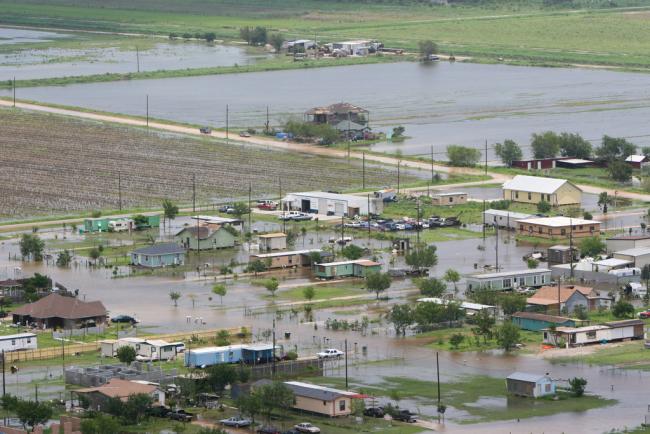 When I hear the Nahuatl word “Rasquache” I think of a subversive and inventive approach to survival. I think of my Abuelita repurposing the margarine container as Tupperware, a wall in West San Antonio remade into a prayer candle, and the creative way that residents of colonias, or informal neighborhoods, in the Rio Grande Valley modify their homes to survive a flood or make room for a new baby.

The Rio Grande Valley, the southern tip of the Texas-Mexico border region, experiences a significant amount of rainfall due to its proximity to the Gulf of Mexico. Between the lack of infrastructure and the perennial rainy season, the area is constantly threatened by destructive flooding. Colonias along the outskirts of larger border towns are especially vulnerable as a result of a lack of infrastructure, including unpaved roads and inadequate drainage.

The region also experiences extremely high poverty, low public health outcomes, and a high degree of political and economic marginalization. Colonias face even greater levels of poverty and exclusion. According to Fannie Mae, colonias across the United States have a poverty rate of 27 percent, almost twice the national average. However, according to the Federal Reserve Bank of Dallas the poverty rate in Texas exceeds 40 percent. The public health statistics of the colonias are in dire straits as well; the Journal of the American Academy of Pediatrics says that nearly half of households are overcrowded, almost 97 percent experience pest issues, and 50 percent have mold problems. These conditions magnify flood risks. The colonias of the Rio Grande Valley are almost 96 percent Hispanic, the vast majority Mexican American.

Between October 2019 and January 2020, I conducted focus groups, interviews, and quantitative analyses on disaster recovery in the colonias of the Rio Grande Valley as part of my research for my geography master’s thesis. Since then, the pandemic has further exacerbated environmental racism, disparate public health outcomes, and economic and political marginalization. But despite the precarity and poverty of life in the colonias, the community continues to be resilient and resourceful, finding creative ways to make do—in the Rasquache tradition—rather than passively accepting systemically racist policies.

Dr. Medina-Lopez describes Rasquache as: “An underdog perspective that stresses making do in an environment always on the edge of coming apart [where] things are held together with spit, grit, and movidas [movement]…Rasquache emerges from a sociocultural imperative to recycle, upcycle, make do, and make new meaning through whatever available bits and pieces.” Rasquache is a prevalent cultural practice among Mexicans and Mexican Americans, but this kind of creative upcycling also takes place throughout Latin America and the Global South. Where communities struggle to make ends meet, creative solutions often arise as survival mechanisms.

The colonias of the Rio Grande Valley are uniquely suited to understand both Rasquache practices and to center creative solutions in liminal spaces. While the term wasn’t used by the colonia residents I spoke with during my research to describe the creative ways they modified their homes to survive floods, I use the term Rasquache because the concept has historically been a way for Chinanx/Latinx communities in the United States to resist and subversively survive despite political marginalization, economic pressure, and environmental racism.

These cultural practices are critical to understanding and addressing the systemic socioeconomic inequality that has arisen from colonialism and structural racism. Policymakers and non-profit organizations need to embrace cultural practices such as Rasquache and incorporate local knowledges when making decisions that affect the lives of hundreds of thousands along the U.S.-Mexico border.

Colonias, and their more recent cousins Informal Homestead Subdivisions, are typically rural or peri-rural neighborhoods on the outskirts of large border towns, usually in floodplains, and often made up of manufactured housing (mobile homes) that are often modified by their owners. These home modifications are one major way colonia residents engage in Rasquache practices. Known in the affordable housing space as self-help housing, this “Do-It-Yourself” home construction model is commonly seen in informal communities.

The process usually goes something like this: A family buys a plot of land in a rural, often illegal subdivision, typically using predatory loans. Then they haul a mobile home or trailer onto the property. Over time the family will add rooms to the home as resources become available and the family expands, such as when a new baby arrives, or an in-law moves in. Sometimes this is done with a high level of skill and resources, but often the quality of the home is reflective of the family’s limited capital. This informal housing development, and the incremental way it emerges, is a quintessential form of Rasquache because it is a creative, solution-oriented form of surviving on the periphery.

The self-help home construction model is also how residents repair homes damaged by floods. Most families are forced to restore their homes “little by little” because they do not have the money to do the project all at once, nor the credit to get a loan from a bank.

During a focus group near McAllen, Texas, a mother described turning to predatory payday loans to fix her house. “I didn’t have another option,” she said. “We had to fix the home part by part because we didn’t get a large loan.” Dozens of other colonia residents echoed her story, describing being forced to make do with “bits and pieces” for the repairs they need.

Several focus group participants also mentioned how, despite their limited resources, they tried to make their home more resistant to flooding.

“There’s always flooding in my home, but I have been putting rocks and sand underneath the house in order to fix the issue,” one woman said. “The rocks and the sand work when the floods aren’t as big, but when there’s a lot of rain it doesn’t work.”

Community members described how the informal and self-help home modifications serve as ad hoc flood mitigation, an attempt to supplement the failure of county and federal authorities in providing adequate support. Chicanx cultural resistance to structural poverty and racism is at the heart of what Rasquache means. From Oakland to the U.S.-Mexico border, this creative cultural practice enables marginalized groups to both subvert their positions as second-class (or undocumented) while creatively improving their living conditions.

Residents of the colonias not only apply Rasquache practices to their own homes, but often share their creative solutions with their neighbors. During the focus group, many residents told stories of helping each other despite being flooded themselves.

One participant shared: “After a big storm my roof started leaking. I went to my neighbor, and he helped me put steel sheets over the roof. He also told me to give him a pair of jeans, and I asked why. He said I’ll put asphalt in it and put it up in the insulation of your roof to stop the leak. He told me that would last for 10 years!”

Beyond home repairs, the examples of mutual support also included sharing resources and giving rides. These communities not only lack proper drainage, which exacerbates floods, but also paved streets, making the roads uncrossable for days, or even weeks, after a flood. Being trapped means missing school, work, and medical appointments, but community members find ways to support each other through those challenges.

“My neighbor gave a ride to my children to go to school and twice took me to the grocery store when we could leave the colonia again,” said one mother, describing the help she received after her family car was destroyed in a flood.

“When my home was flooded, all the sewage came up into the house and we couldn’t use the water or the bathrooms,” said another respondent. “We also couldn’t drink the water for weeks after the flood. Luckily my neighbors had bottled water that they shared until we could leave the colonia.”

Although there is ample evidence that colonia residents survive by using innovative Rasquache solutions and supporting each other, they need additional support to overcome their vulnerable situation. This community is surviving, but not recovering from omnipresent flooding.

When designing new policies to help these communities, policymakers and nonprofits need to center the experiences and cultural practices of colonia residents. Otherwise, well intentioned policy will likely miss the mark. Although the federal and state governments have improved running water and electricity in the colonias, they need to also direct more resources toward the issues that colonia residents identify, like needing adequate drainage, paved roads, and sewage systems. In northern Mexico, the Mexican government has integrated the colonias into a network of paved roads, water, sewage, and drainage, regardless of the legality of their development. U.S. policymakers should follow the Mexican government’s model and work with the colonia community to determine and address their needs.

Policymakers also need to recognize and understand how colonia residents finance their flood recovery. Currently, there is little to no support from the federal government. Colonia residents are actively excluded from receiving Federal Emergency Management (FEMA) funds and many do not qualify for traditional refinance loans to fund their recovery. Instead, colonia residents use predatory loans to repair their lives incrementally. This community needs protection from predatory lending and access to alternative financing. Come Dream Come Build’s (CDCB) Community Loan Center based in Brownsville, Texas, has created a lending product designed to replace predatory loans in the Rio Grande Valley. However, this model does not fully consider the challenges locals face. Only employees of registered employers can access these loans, and many colonia residents work in the informal economy without regular paying jobs or formal paychecks. While this loan product is a step in the right direction, there needs to be financing available for informal workers as well.

Another program from CDCB directly centers the self-help housing model of the colonias. The Lower Rio Grande Rapid Recovery Housing Program (Rapido) supports families recovering from floods by rebuilding homes on the same lot and helping the family add or modify the home as they see fit. In this way, the Rapido program gives families agency in their own home design, making decisions about home size depending on their plans for familial expansion. This model recognizes and centers the colonia’s common cultural practice of self-help housing.

Although colonia residents lead precarious lives in an oppressive system, they are not passive victims. They have taken charge of improving their homes and community. So, what comes next for the colonias of the Rio Grande Valley? Optimistically, the U.S. federal and Texas state governments will engage with colonias in a grounded way that centers their experiences and informal cultural practices as a way of achieving equity for this marginalized community. Hopefully, the Senate-passed infrastructure bill will target funding toward much needed infrastructure in the colonias and diminish the persistent flooding they experience. One thing is certain, however: the next rains will surely come, and the people of the Rio Grande Valley will continue to fight to improve their living conditions.

Lucas Belury is a geographer, researcher, and facilitator with a passion for building a sustainable, just, and equitable world through strategic partnerships and an activist-centered geographic perspective. His research focuses on environmental racism, the informal economy, and the U.S.-Latinx experience.