Indigenous and campesino communities turn to strikes, road blockages, and other confrontational tactics to reclaim their political agency. 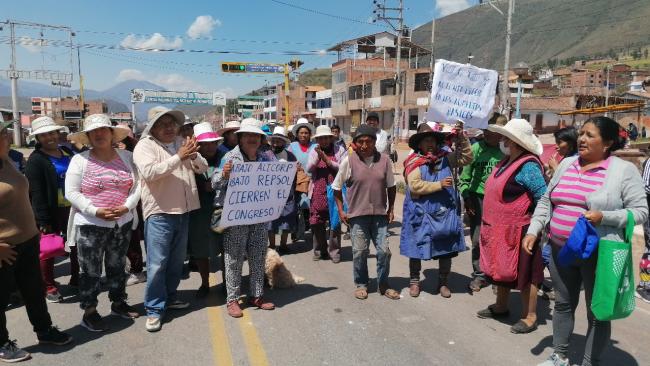 On April 20, five out of 13 provinces in Espinar, in Peru’s Cusco region, called for an indefinite strike. The communities accused the Glencore mining company of violating their collective rights, threatening their livelihoods, and destroying the local environment through the extraction of copper in the Anatacappay mine.

The protest lasted only one day. The threat of a regional strike in this important transit and mining region was enough to force government officials and representatives of Glencore, the parent company of the mine, to the negotiating table. Meetings between leaders of the strike and government officials began in late April. By late May, Glencore had conceded: mining officials offered to delay the start of operations in its latest auxiliary mine, Coroccohuayco, for another two years. However, this delay was not seen as a significant victory, since the only reason it had not yet started operating was because of the community’s ongoing resistance. Community representatives remain suspicious about the government and company’s intentions, and continue to push for an expansion of the prior consultation statute, which was passed in 2011.

Over the years, numerous communities across the Andes and Amazon have voiced their displeasure at the way the prior consultation requirement has become a kind of folly—a way of complying with the letter of the law of prior consultation, as companies often do not actually consult communities but come  with predetermined plans and pressure them to simply sign off on them.

The dominant discourse of contentious politics reads resistance as a preoccupation with power. However, many communities in Espinar and elsewhere are less concerned with occupying the seats of power than they are with protecting their social relationships and collective autonomy in the face of violent forms of extractivism and reterritorialization. In Espinar, communities continue to demand a process of direct consultation on their terms. Throughout the country, especially in the mining corridor, people are increasingly relying on strikes, road blockages, and other forms of protest as a means of creating community agency.

The Politics of the Paro

Indigenous communities have long confronted the state by converting the public arena into a political space through its occupation. The paro is an effective tool in the repertoire of oppressed classes. It is a form of what critical feminist scholars refer to as “embodied politics,” a way of defying violence through physical presence, and is most often carried out by women leaders. Paros animate various political discourses: they allow oppressed communities to make unapologetic demands and reclaim autonomy from the bottom up. Paros have become a way of defining the terms of engagement, as can be seen in Espinar, where the five communities continue to organize around a set of demands and conditions for collective rights in the battle against mining projects that dates back to the 1980s.

Having long confronted a dismissive state, communities are increasingly recognizing the state’s complicity in the structural and environmental devastation they face. More and more of them are forcing regional governments to acquiesce to their demands, and in some cases, declaring their autonomy altogether, as in the case of the recently established Autonomous Governing Territories of the Shipibo and Wampis nations.

This latest strike is part of a pattern of increasing local autonomy in Latin America.

Neoliberalism and the Legacy of Fujimorismo

The number of social and environmental conflicts in Peru has grown significantly since the turn of the 21st century, reflecting new political horizons and expressions. The passing of President Fujimori’s 1993 neoliberal constitution ushered in a new era, opening the floodgates for foreign direct investment that advanced new mining projects and explorations. Nearly a fifth of Peruvian territory today is under mining concessions.

Soon after he was elected to office, Fujimori pushed through an unprecedented economic “shock therapy,” removing price controls and introducing a new currency. Part of this neoliberal package was to reform the 1969 Agrarian laws through new legislation concerning land titling. The 1969 Agrarian Law has a controversial reputation. Although it contributed to the formal end of the hacendado, a feudal-like system by which people were tied to large swaths of land owned by powerful landowners, the 1969 Agrarian Reform subsumed land titling under the auspices of the free market. It also de-Indigenized the historical struggle, as communities were now referred to as campesina instead of indígena in official state discourse. The biggest outcome of the 1969 Agrarian Law was the way it restructured the countryside, bringing the Peruvian countryside into the capitalist market.

The goal of Fujimori’s reform laws was to further fracture communal territories by breaking them up into individually owned parcels. Leading up to the 1993 constitution, Fujimori passed a series of legislative decrees meant to bring the agrarian reform more in line with the global capitalist economy. Many of the legislative decrees, most notably Law 26505, commonly referred to as the Land Law, replaced collective titling with individual titles. Since the implementation of Fujimori’s constitution in 1993 and related decrees, Peru has seen an influx of foreign investment, particularly from mining companies that have benefited from favorable tax breaks and other financial guarantees.

Fujimori’s tenure would ultimately end in disgrace in 2000, when he submitted his resignation by fax from a self-imposed exile amidst corruption and human rights violations. While never convicted for the latter, he was found guilty of embezzlement in 2009 and remains in prison today.

Modern extractivist projects in Espinar began in 1985. That year the open pit Tintaya mine—now known as the Anatacappay mine and the site of  recent protests—initiated its operations, extracting 85 million tons of copper ore and waste per year until its closure in 2012.

Since the start of mining production in the region, toxins have been found in the bodies of humans and non-humans in the area, and the surrounding community has suffered detrimental health impacts, including pulmonary diseases. A 2010 study by the National Institute of Health in Peru (CENSOPAS) found 332 out of 506 residents tested had arsenic in their blood, as well as other heavy metals including mercury and lead.

Following the closure of Tintaya, the mining complex of Antapaccay initiated its operations in 2012. According to Environmental Justice Atlas, its production “consists of 80,000 tons per day. Its reserves surpass the billion tons of 0.49 percent copper with an estimated service life of two decades.” The Antapaccay mining projects reported one billion dollar revenue in the year 2016. These profits are sharply contrasted by the destitution in the surrounding community, where around 70 percent of people live below the poverty line. 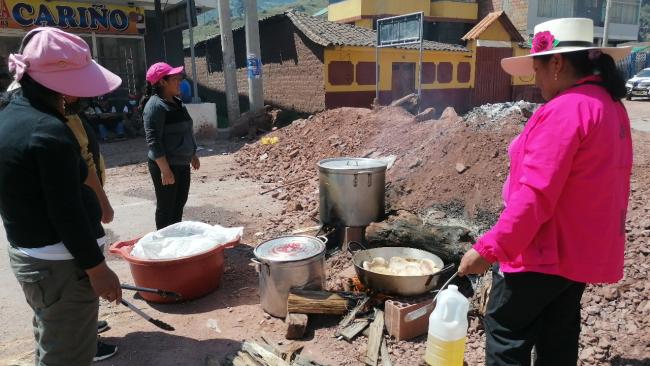 Many of the members of the five communities that organized the strike are part of the K’ana ethnic community. In 2019, the regional government of Cusco recognized the K’ana as an autonomous group, acknowledging their right to the “autodeterminación de la comunidad campesina del pueblo K´ana como comunidades indígenas u originarias de la provincia de Espinar” (self-determination of the K’ana pueblo as Indigenous and original inhabitants of the Espinar Province). However, the acknowledgement of  K’ana autonomy was a mere formality for the community, which has organized under principles of collective self-determination for millennia, resisting numerous empires, from the Spanish to the Incas.

Paros, strikes, and occupations are the political expression of Indigenous struggles across the region: in the Amazon, the Shipibo joined the Wampis in 2021 in declaring their territorial autonomy; in April of this year, the community of Huancuire reoccupied their original land in Fuerabamba after being relocated for the expansion of the Las Bambas mine. And just this past month in Ecuador, Indigenous members of CONAIE brought the capital to a standstill demanding an end to oil drilling in protected Indigenous territories.

“They have constantly deceived us with their false promises,” said Professor Augusto Idme Ramos, Secretary General of the SUTEP labor union in Cusco, adding that the pattern of deception “is why we have initiated the 48 hour strike/blockade, to guarantee a meeting with the council of ministers.”

The latest set of demands speaks to the collective and decentralized form of governance that defines the social organization of the K’ana and the communities organizing the strike. The movement calls out the provincial mayor, Lolo Arenas, for failing to consult with communities prior to making decisions on their behalf, a clear denouncement of representative democracy and its failure to hold leaders accountable.

Present-day formulations and gestures of political autonomy reflect ancestral worldviews and communal organizing, practices that continue to advance decentralization and communality. The organizations representing the communities of Chumbivilcas, Chanchis, and Quispucanchis point out the deceptive politics and terms of engagement under which the central government has long operated. This differentiated relationship to power and governance is common across Peru Profundo, a leftist current born in the country's interior, and something that, if recent unrest is any indication, the normative criollo class is being forced to reckon with.

Espinar is but a flashpoint, a site where communities have long operated under different terms and conceptualizations of power, with the paro serving as one manifestation of this alternative politic.