Decades after her shocking murder, the Afro-Peruvian activist and organizer’s legacy for affirming life and collective dignity is more relevant than ever. 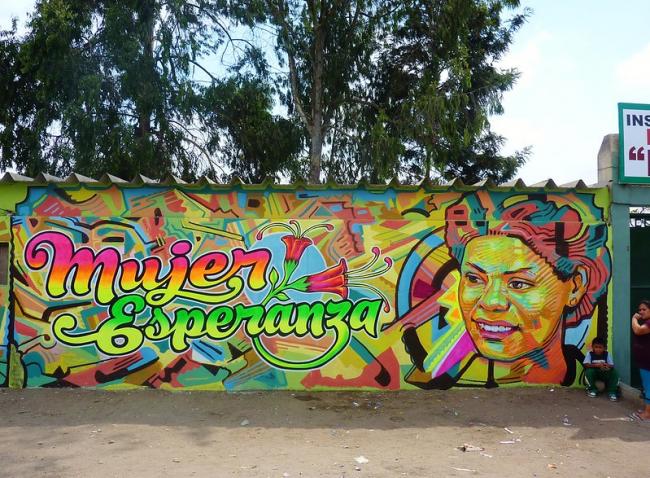 “I could never destroy what I have built with my own hands.”

On September 9, 1991, a bomb exploded at a distribution center for the Vaso de Leche program in Lima. The Shining Path publicly accused Moyano. But as president of the Women’s Federation of Villa El Salvador (FEPOMUVES), administering the program was an essential component of her work as a local activist and organizer.

The Shining Path went as far as to circulate a pamphlet that sought to undermine or discredit Moyano’s work. They accused her of encouraging community patrols to become police informants, the misappropriation of funds, and collaborating with the Peruvian government to maintain dependency on social welfare. In reality, the Shining Path was targeting community leaders like Moyano.

And on February 15, 1992, she became their next victim. Moyano’s death, however, was a turning point in Peruvian history—for better or worse. President Alberto Fujimori would soon consolidate power through a self-coup and Abimael Guzmán, the leader of the Shining Path, would be captured, effectively ending a violent, decade-long insurgency.

Moyano’s legacy rests somewhere uncomfortably between these two polarizing, larger than life figures. She was critical of both, risking her life to rebuke the violence of austerity and terrorism. Yet she was more than just a martyr for social justice, she was a Black Peruvian activist and organizer who stood with the people. Thirty years later, it is important to reflect on that legacy, to understand Moyano’s humanity—and by extension, her politics—as nuanced, flawed, yet above all, life affirming.

A Life of Activism in Villa El Salvador

Moyano was born on November 23, 1958 in the Barranco district of Lima. In the early 1970s, her family would be displaced to Villa El Salvador, one of the many pueblos jovenes, or shanty towns, that had sprung up on the outskirts of Peruvian cities as rural migrants began arriving en masse in the mid-20th century. By the early 1990s, Villa El Salvador grew to 300,000 residents and was recognized internationally for its defense of human rights and grassroots model of community-led development.

Moyano became involved in her community from a young age. After enrolling at Garcilaso de la Vega University to study sociology, Moyano’s religious convictions shifted toward socialism as she sought to understand the structural inequality of Peruvian society. In 1976, Moyano became a volunteer teacher in a non-formal, experimental early childhood program. During this time, she became a more militant activist, participating in a teacher’s strike in which she helped occupy a school building. Her politics, however, could be contradictory, like when she crossed a picket line to continue working as a substitute teacher so she could pay for college tuition. And although she did not call herself a feminist, she believed in the potential for women to change Peruvian society for the better.

In 1980, she married Gustavo Pineki and started a family. Three years later, Moyano helped create a mothers’ club and became its director. “It was in this local mothers’ club that María Elena’s concerns for social justice became focused on women. She became aware of their marginalization in Peruvian society,” writes Patricia S. Taylor Edmisten, translator of The Autobiography of María Elena Moyano. Moyano also became secretary of the Women’s Federation (FEPOMUVES), which advocated for women’s rights and provided basic services and training for women in poorer neighborhoods. “These women were building democracy from the bottom up, while pressuring the government to respond from the top down,” according to Taylor Edmisten. Moyano would eventually be elected president of the organization, and in 1989, she was elected deputy mayor of Villa El Salvador as a member of the United Left Party, a coalition of leftist parties and movements.

A month prior to the September 9 bombing, another activist named Juana López León was killed for her work with the Vaso de Leche program, which sought to provide youth and elderly residents with at least one glass of milk each day to combat malnutrition. “Programs directed at easing the plight of the poor,” writes Taylor Edmisten, “especially those that required government cooperation, like the Vaso de Leche program, were anathema to Sendero, because they diminished grievances against the government and were thought to lessen revolutionary fervor among the poor.” López León’s murder, along with several others, prompted Moyano to leave Peru briefly. Upon her return, she was assigned just two police bodyguards.

In response to the Shining Path’s accusations, Moyano wrote a letter rebuking the violence. In it, she not only declared her innocence, but also explained why she no longer considered the Shining Path to be a revolutionary group, despite her initial support for their cause. She argued that only the Peruvian Left could defeat the Shining Path, particularly given, in her view, widespread disillusionment with the Right. She was, however, critical of the Left for not coming together—which is unfortunately still the case decades later. She also denounced police and state violence, as well as the Fujishock austerity plan, which invariably hurt the poor and marginalized. In response to the latter, the Women’s Federation (FEPOMUVES) attempted to ease the impact of president Fujimori’s neoliberal policies by organizing 1,500 Vaso de Leche committees and 800 communal kitchens.

Virginia Vargas, a feminist sociologist and founder of the Flora Tristán Peruvian Women's Center described Moyano’s fate as “a death foretold,” borrowing a phrase from the Gabriel García Márquez novel. Moyano also sensed death was near, particularly after the assassination of a friend in late January. But she vowed to continue her work despite the death threats she began receiving. On February 14, 1992, she organized a march against violence even though the Shining Path had announced an attack and asked people to stay home.

Moyano spent her last days staying at the home of Diana Miloslavich Tupac, a feminist activist and long-time coordinator of the Political Participation Program at the Flora Tristán Peruvian Women's Center, who was recently named to President Castillo’s cabinet as Minister of Women and Vulnerable Populations. On February 15, the pair had breakfast together before Moyano went about her day, eventually ending up at a community fundraiser where Shining Path gunmen shot her to death. The assailants then dynamited the corpse as her two young children watched. She was just 33 years old.

More than 300,000 people attended Moyano’s burial. In the aftermath of such a shocking and horrific murder, the Shining Path would lose virtually all sympathy to its cause—a shift in public perception largely credited to Moyano.

Moyano was subsequently honored by the Peruvian government with the Order of Merit. Amnesty International published a report on women’s human rights dedicated to her memory. A biographical film was also released called Coraje, which focuses on the last month’s of Moyano’s life. In 2000, a memoir entitled The Autobiography of María Elena Moyano was published, edited and annotated by Miloslavich Tupac, with translation, prologue, and afterword by Taylor Edmisten. More recently, the University of Illinois at Urbana-Champaign set up a fellowship in Moyano’s name. The Ministry of Culture also posthumously awarded Moyano Meritorious Personality of Culture and a vigil was held in December of 2021. 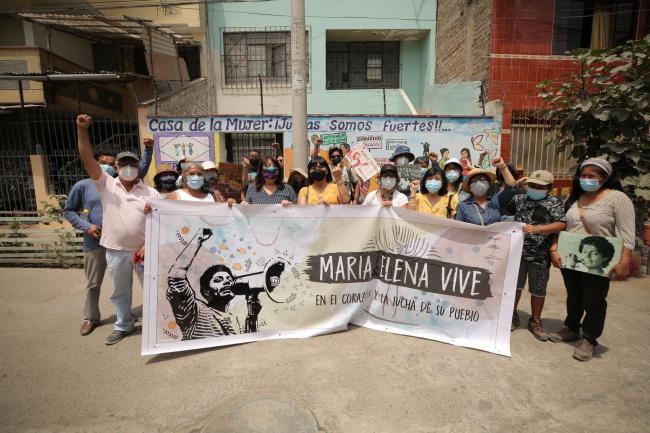 The Revolution is an Affirmation of Life

Shortly after her friend’s death, Vargas condemned the Left for not offering more support to Moyano as she became more outspoken against the Shining Path. Vargas also criticized the Left’s weak relationship with the women’s movement. Others, like Carol Andreas, wrote that Moyano should not be mourned because she was a traitor to the revolution. In a letter restating many of the Shining Path’s talking points, Andreas coldly asserts: “The tragedy is that she [Moyano] betrayed her community in the end, and that revolutionaries felt they had no alternative but to end her life.”

But the revolution to which Andreas refers was a different project, a death cult of sorts in which the revolutionary Left committed acts of violence against the very communities it sought to liberate. Moyano’s project, on the other hand, was firmly on the side of life. In her own words:

“…the revolution is an affirmation of life and of individual and collective dignity. It is our ethic. Revolution is not death, nor imposition, nor submission, nor fanaticism. Revolution is new life—the belief in and struggle for a just and dignified society—in support of the organizations the people have created, respecting their internal democracies, sowing new seeds of power in a new Peru. I will continue to stand with my people, with the women, youth, and children; I will continue to fight for peace with social justice.”

Néstor David Pastor is a writer, editor, and translator from Queens, NY.