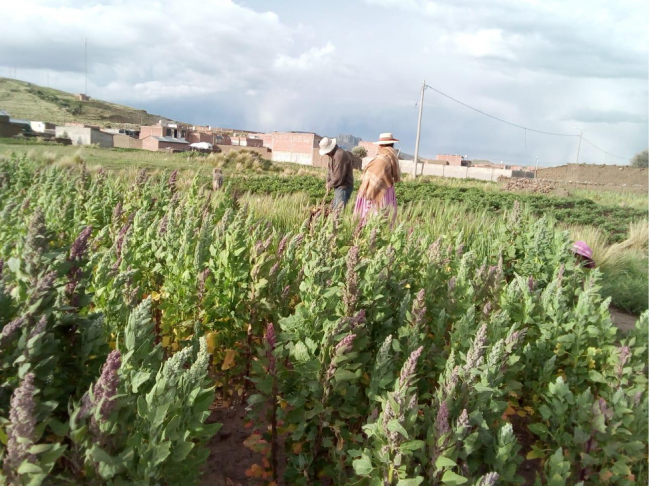 On a cold day in June, María, a young mother who lives in a rural village in southern Peru, set off to buy bread. “But when I got to the store, I was surprised to find the price of bread had changed. I returned home with seven pieces of bread, when this amount used to be enough for 14.”

In the district of Pichacani in Peru’s southern province of Puno, many are struggling with rising costs of living. Located at 3,900 meters above sea level, the climate in Pichacani is characterized by low temperatures, strong winds, and intense precipitation. These conditions pose a challenge for small-scale agriculture, which, along with animal herding, contributes to people’s livelihoods. Recent price increases in food and fuel represent an additional stress for families just emerging from the hardships of the pandemic, making it necessary to adopt strategies to mitigate hunger in the midst of an economic and political crisis in the country.

Efforts to address high rates of childhood anemia and malnutrition in the province of Puno have stalled due to the pandemic and could be made more difficult with the elevated cost of food. Faced with economic uncertainty, the news of the arrival of monkeypox and the fourth wave of Covid-19 was no longer cause for surprise or concern, because the main worry on people’s minds was the provision of the family food basket and meeting basic needs.

We spoke with small scale farmers in Puno earlier this year about how they are coping with the increased cost of living and food insecurity in the region. At the end of the May harvest, peasant producers had to spend more for foods that they were used to sharing at the family table. The high cost of agricultural products affected the family economy, while spikes in the cost of fuel brought with it an increase in bus fares, freight for the transport of goods, tractor rentals, and equipment used in agricultural activity. These costs doubled, and rural families had to absorb production expenses that were not foreseen in the previous agricultural season.

The food crisis in the first quarter of 2022 disrupted already vulnerable food systems in the highlands, making more evident the lack of machinery and equipment for the transformation of agricultural products, the effects of climate change, and the government’s inadequate management of resources in the agricultural and livestock sector. With the increase in food costs, the day's wages were only enough to buy a few products, and families worried about the threat of famine and other economic difficulties. In the local primary school, when teachers asked students to bring fruit for snack time, not everyone had the means to bring something to eat. In their homes, there were days when the foods that are essential for children’s development and nutrition were out of reach for many families. Many families were forced to seek additional income to cover the rising expenses of the family food basket.

Adding to the setbacks of the 2022 agricultural season, inclement weather such as frost and hailstorms affected the potato, oca (a variety of Andean tuber), and quinoa crops. In previous years, the oca harvest was good and there were large potatoes for consumption, but this year most farmers harvested only medium and small potatoes. In addition to providing sustenance, large potatoes can be used to barter for meat, alpaca fiber, or dairy products. But with smaller potatoes the only alternative was to make chuño, a process that consists of dehydrating potatoes to preserve them. This ancient food is still consumed in the Andes and helps families mitigate the impact of food insecurity. Both chuño and potatoes are present in soups (chairo), stews, and many other typical dishes. The highland’s low overnight temperatures and intense sunlight during the day allow the elaboration of this product in its various presentations, such as tunta or moraya—white chuño or black chuño. By making chuño, a portion of the harvest can be preserved for future consumption. 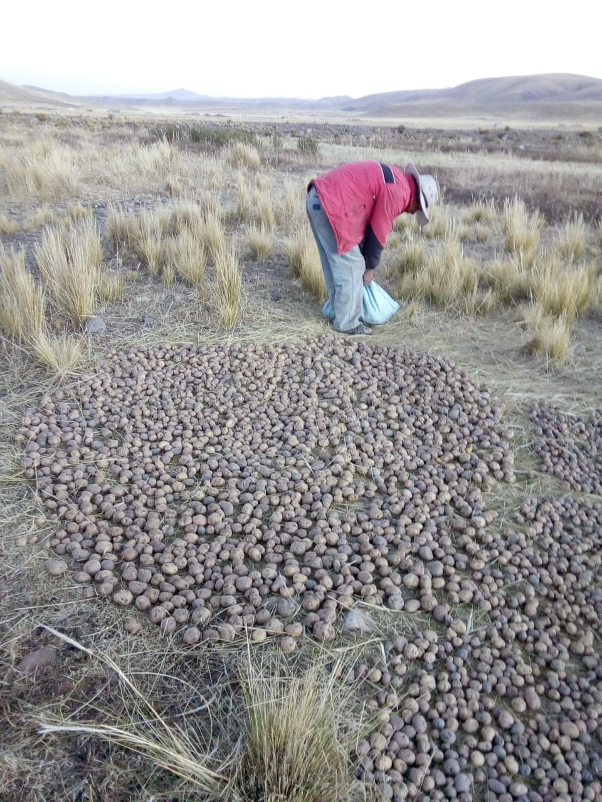 Many of the locally produced foods such as quinoa, cañihua (an Andean grain), wheat, potatoes, and oca consumed by rural communities are rich in nutrients. Farmers complement these traditional agricultural products with dairy and vegetables, usually purchased in local markets. With support from FONCODES (Fondo de Cooperación para el Desarrollo Social), vegetable gardens, or biohuertos, provide an alternative for families to grow their own foods. Although this project was put on hold due to problems with project management, some families continue to maintain biohuertos on their own.

Many small farmers and agronomists that we spoke to attributed the problems with agricultural production to a lack of government investment at the central, regional, and local levels. Inadequate government support was especially disillusioning to those who voted for Pedro Castillo in the last presidential election. A former schoolteacher and union leader with a rural background, Castillo promised a “second agrarian reform” that would benefit small producers.

According to one community member, “for agriculture, it has only been false promises. Everything has gone up, there is no support for Puno, which supported [Castillo]. He should support the countryside with projects.” Since the start of his presidency in July 2021, constant changes in his cabinet—including  five agriculture ministers in 10 months—as well as corruption allegations and the opposition’s continued efforts to oust him, have created social and political instability at a time when rural communities most need assistance.

One of the few sources of government support during the pandemic were “bonos” (cash transfers of between s./350 and s./700, or $90 to $180) given to low-income families. Some of these payments continued into 2022, and the government started distributing food vouchers of s./270 ($70) to offset high food prices in August. According to our interviewees, the pandemic vouchers helped cover some basic expenses, like payments for phones, electricity, water, and school fees, but they were not enough to make up for the higher cost of food.

Another challenge for rural families in post-pandemic times has been the increased cost of gas, with the price of a gas cylinder increasing from s./30 to around s./60 ($15.50). As a result, families in rural areas returned to cooking with cow manure (bosta) and firewood. Even in cities, smoke coming from houses could be glimpsed in the distance, a sign that they were preparing food. This was not a common sight before— most families only used gas rather than collecting manure and cooking with a traditional clay stove. But now, in cities like Puno and Juliaca dung has been commercialized again, and people use wood stoves on terraces, in the street, or on patios to prepare their food.

Between Rural and Urban Life

For many people striving to feed their families, the only option has been to reduce their food rations. At the beginning of the pandemic, some returned to rural areas. At first, living in the countryside was a survival strategy. However, this turned out to be complicated for those people who made their lives in big cities, where they had access to basic services. Children who were in school required internet, electricity, media, and telephone services. These communication gaps and barriers made it difficult to stay in rural areas.

For grandparents, the return of their family members to the countryside was a dream come true.  But it created additional challenges for unemployed heads of households, who were forced to return to the city in search of new work opportunities. Yet the elderly also do their part, working the land to produce food and safeguarding seeds and knowledge. Seed saving contributes to food sovereignty, and the use of manual tools and traditional agricultural methods reduce production costs without relying on costly fertilizers or farm equipment rentals, which have also gone up in price.

For the families of the altiplano, agriculture is fundamental. In the Aymara tradition, farmers make ritual offerings to the Pachamama as thanks for protecting them from hunger and providing nutritious food. Given the circumstances that the world is going through—from climate change to the war in Ukraine—family farming, the raising of sheep and alpacas, the sale of cow's milk, and the making of handicrafts represent important ways of securing basic necessities in rural areas.

Traditional agriculture, including the locally produced foods that make up the Andean diet, can contribute to household food security in times of economic uncertainty and disruptions to the global food system. However, the neglect of the agricultural sector by the government and low agricultural yields continue to pose significant challenges for small farmers. The rising costs of production and appealing employment opportunities in the city also disrupt the viability of small-scale agriculture. Still, in spite of these challenges, rural families persevere, sustaining their traditional ways of life in the countryside.

Hilda Beatriz Manzano Chura is of Aymara origin and has a Bachelor’s degree in Administration and Social Communications from the Universidad Nacional del Altiplano-Puno. She has represented Peru in international events in Colombia, Chile, and Bolivia, raising awareness about diverse strategies used in community-based disaster risk management with a focus on interculturality and safeguarding ancestral knowledges in Aymara communities.

Fabiana Li is an Associate Professor of Anthropology at the University of Manitoba, Canada. Her research focuses on environmental conflicts, resource extraction, food politics, and the global expansion of quinoa production.